Serial M4A2 at the museum. On board, the factory reinforcement of the armor is visible in the form of additional sheets covering the stowage.

The American M4 medium tank had a fairly powerful armor, but it did not protect against all current threats. Since a certain time, several types of hand grenade launchers have become a serious problem. In this regard, attempts were regularly made to strengthen the standard armor with various overhead elements. One of the results of such work was the first American set of additional combined armor with a non-metallic filler.

On the M4 tanks of the first modification, the frontal projection of the hull had a thickness of 50.8 to 108 mm. The slope and curved shape of the parts provided a certain increase in the level of protection. Subsequently, the upper frontal part became thicker – 63.5 mm. The side projection in all modifications was protected by 38 mm of armor. The forehead of the early turret was 76.2 mm thick, while the later hoods were protected by 89 mm armor.

The tanks were protected from bullets and shrapnel, as well as from small and medium caliber artillery. At the same time, the main German-made tank guns pierced the frontal armor of the hull and turret from at least hundreds of meters. In 1943-44. American tankers had to face a new threat in the form of rocket-propelled grenade launchers, which, with a successful hit, confidently pierced the armor and hit the crew or internal units. 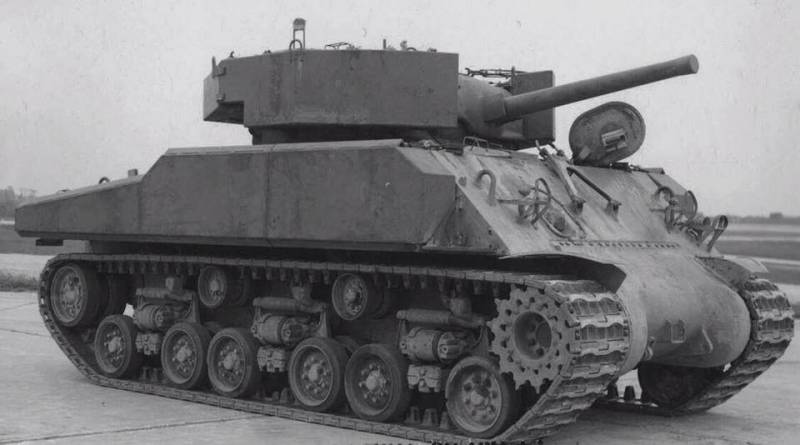 Experienced M4 with a set of overhead modules

Initially, the tankers tried to fight the new threat on their own. The armor was hung with caterpillar tracks, sandbags, boards and other “overhead additional booking”. For obvious reasons, the effectiveness of such funds left much to be desired, and therefore the search for a full-fledged and workable additional protection began.

The US Army Department of Armaments launched new research in mid-1943 and continued it until the end of the war. First of all, various options for overhead armor blocks were considered, differing in steel grade, thickness and configuration. In addition, the possibility of using alternative materials was studied, incl. partial rejection of metals.

Replacing armor steel with other materials, in theory, made it possible to obtain the same level of protection with a significant reduction in mass – or to increase protection without increasing the weight parameters. The search for the optimal composition of such armor continued for a long time. Tests of finished samples began only at the beginning of 1945.

To enhance the protection of the tank, it was proposed to hang metal boxes filled with unusual “plastic armor”. The first version of such “armor”, under the designation HRC1, was a mixture of 50% aluminum filler and a binder – 40% asphalt or pitch with 10% wood flour. The second track, HRC2, was much simpler and cheaper. It consisted of 80% quartz gravel. The stones were glued together into a single structure using a mixture of 15% asphalt and 5% wood flour. It was planned to pour the mixture into a thick-walled aluminum box with fasteners for installation on a tank. 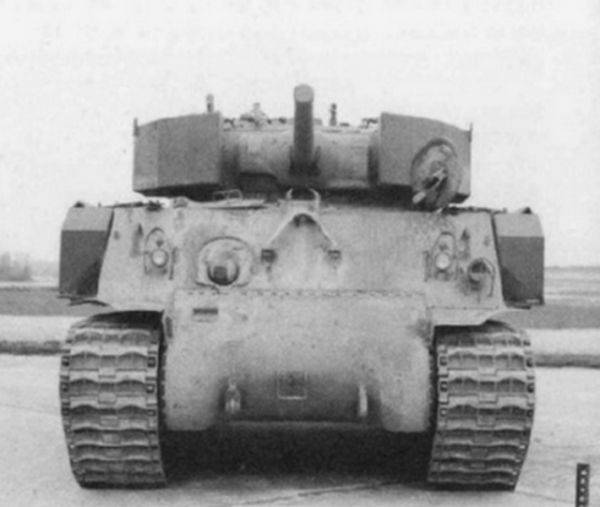 The hull’s forehead had only regular armor

HRC compositions differed from armor steel in lower hardness and higher toughness, as well as significantly lower density. It was assumed that a cumulative jet or an armor-piercing projectile, passing through an overhead block with aluminum walls and “plastic armor”, would lose most of its energy, and the rest would be extinguished by the tank’s own armor. In addition, the abrupt transition between different media should have caused additional loads on the projectile or jet.

Based on the results of preliminary tests with shelling of experimental modules, the HRC2 composition was considered more successful. The gravel-based mix combined reasonable weight, high protection characteristics and low cost of production. All further work was carried out only using this composition.

Having chosen the optimal “plastic armor”, the Department of Armaments began developing a set of attachments for the serial M4 tank. At the same time, the fundamental possibility of creating similar products for armored vehicles of other types was not excluded. In fact, the modifications of the new armor had to differ only in the number and shape of individual modules.

It was proposed to build additional protection for the tank from separate elements of different shapes. Each such block was a box made of aluminum with walls and a bottom 25.4 mm thick. An HRC2 layer 254 mm thick was poured between the walls. On the lids of the boxes, brackets were provided for suspension on the tank; matching hooks were added to his armor. The suspension was carried out using 12.7 mm steel cables. 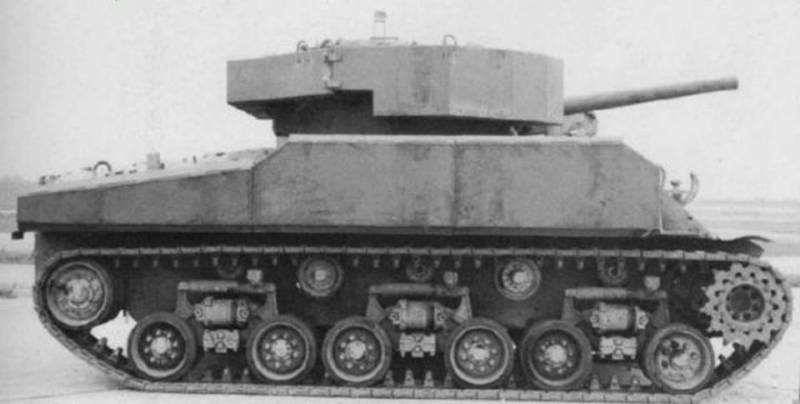 The armor set for the M4 tank included six modules to protect the side projection. They had an angular shape, due to which they covered the combat and engine compartment. Seven blocks were proposed for the tower. Two were on the sides of the mask, two more were hung at the sides. The stern was covered with one wide module. The experienced tank did not receive additional protection for the hull’s forehead. Perhaps such elements would appear later.

The set of overhead armor made of aluminum and HRC2 for the M4 weighed 8 tons. The weight of a set of armor steel with the same protection characteristics would exceed 10-12 tons. However, in this case, the armored vehicle experienced serious loads.

An experimental set of new armor was produced only in the fall of 1945. At the same time, a prototype based on the serial M4 was tested at the Aberdeen Proving Ground. The main focus of the tests, for obvious reasons, was on enhanced protection.

During the shelling tests, it was found that RPzB. 54 Panzerschreck and Panzerfaust 100 (declared penetration 200-210 mm) are capable of damaging the combat module or even penetrating it, but after that they do not threaten the tank’s armor. The turret modules successfully coped with the shelling, while the side blocks of the hull penetrated several times – but without hitting the tank. 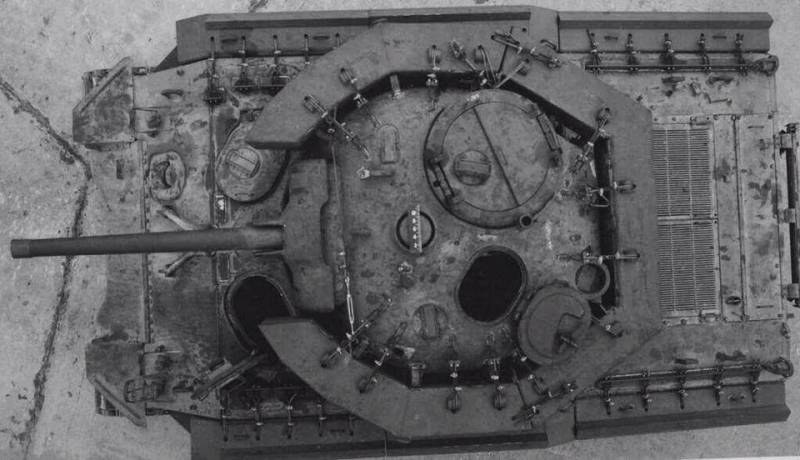 View from above. The means of fastening the blocks to the tank are clearly visible

Different results were obtained when firing with armor-piercing shells of caliber up to 76 mm. The HRC2 module absorbed some of the projectile’s energy, but the rest was enough for a strong blow to the armor. The level of protection against kinetic threats turned out to be significantly lower than that of a hinged steel module of the same mass. In addition, the module suspension system was criticized – under fire, the cable could break, and the tank lost a whole block of armor.

Hinged armor based on aluminum and a mixture of HRC2 in the course of independent tests and tests on the tank, as a whole, proved to be quite good. She successfully solved her main task, sharply weakening the power of the cumulative jet, although the effectiveness against sub-caliber projectiles was insufficient. With all this, the armor was quite simple and cheap to manufacture. Installing and replacing damaged blocks was also not difficult.

Nevertheless, the original overhead modules were not accepted into service and put into series. The main reason was the end of the war and the processes that followed. The US Army no longer needed emergency measures to strengthen armored vehicles. In peacetime conditions, it was possible to do a more thorough study of the issue of overhead armor, or even start the development of a completely new tank, which initially had the necessary level of protection.

Attached modules with non-metallic filling did not enter service, and the main ideas of this project were forgotten for some time. Further development of the protection of American tanks was associated with the improvement of homogeneous armor. However, later the potential of this direction was exhausted, and a new increase in the level of protection of armored vehicles was needed. And now already well-known ideas have come into play – both overhead modules and combined systems, incl. with non-metallic elements. In the future, both solutions became widespread and became the de facto standard for modern combat vehicles.