In 1970, the latest anti-tank missile system BGM-71A TOW was adopted by the US Army. It could be used in a portable or self-propelled form, its operation was not difficult, and a guided missile could fight modern tanks. Over time, this ATGM was repeatedly modernized with an increase in the main characteristics. In addition, the list of customers and operators was constantly expanding.

The first to enter service was an ATGM with a base-type BGM-71A missile. It implemented the basic principles that determined both the high combat capabilities of the complex and influenced its further development. In the mid-seventies, the BGM-71B rocket was adopted, which had minimal differences from the base sample.

The BGM-71A / B missiles were built according to the normal aerodynamic configuration; they had a length of 1.17 m and a launch weight of 18.9 kg. The head of the hull was given under the warhead, behind it was a solid-propellant engine with side oblique nozzles, and the tail section housed the control equipment. Rockets of the first types developed speeds of up to 280 m / s and carried a warhead weighing 3.9 kg (2.4 kg of explosive), penetrating up to 430 mm of armor. 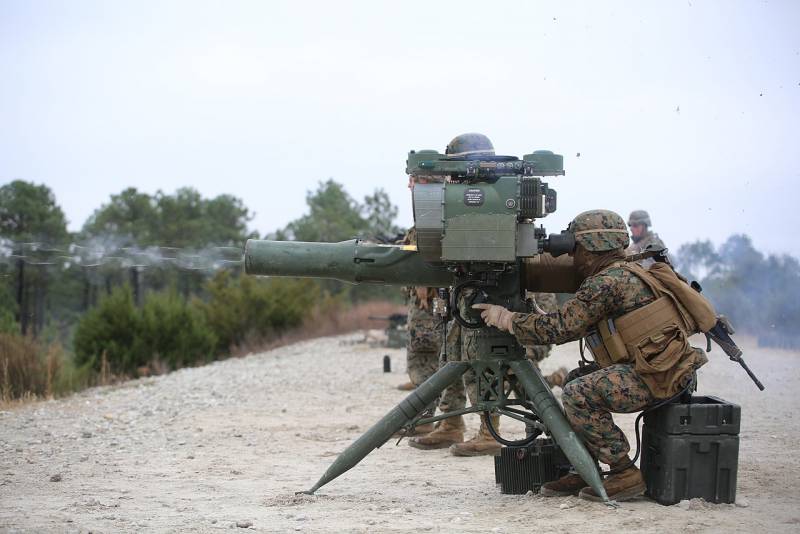 Serial launcher during launch. The unwinding control cable is visible. US Army Photos

The TOW used a semi-automatic guidance system with a wired control system from the outset. The ATGM operator had to keep the aiming mark on the target, and the automation independently determined the position of the rocket along the tracer and kept it on the desired trajectory. On board the rocket, the teams were transmitted over a thin cable. The BGM-71A had a coil with 3 km of wire; in modification “B” we managed to wind an additional 750 m.

Both missiles were intended for use on land-based anti-tank systems and as part of helicopter weapons. In the latter case, the BGM-71B was considered more convenient with an increased flight range, which reduced the risks for the carrier helicopter. However, this did not exclude the use of both modifications on any available platforms. Both in the United States and in other countries, the TOW ATGM was actively used on a wide variety of equipment.

By 1981, the US military had mastered the updated Improved TOW ATGM with a BGM-71C missile. The main innovation was the improved warhead detonation system. A contact fuse was placed on a telescopic rod in front of the missile head. After the start, the bar was opened and the fuse was removed from the warhead, providing an optimal detonation distance. Due to this, the penetration with the same charge weight was brought to 630 mm. The controls have been improved, but the operating principles have not changed. 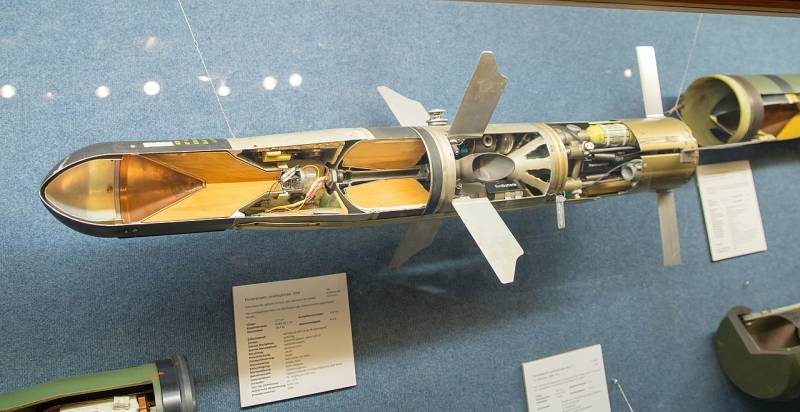 In 1983, the production of the BGM-71D TOW-2 ATGM began. It introduced modern digital control systems with increased resistance to countermeasures. The rocket became heavier and received a reinforced 5.9-kg warhead with a penetration of at least 850 mm; an elongated three-section fuse rod was also used. Due to the use of a more powerful engine, the flight characteristics of the heavier rocket remained at the level of previous models.

In the second half of the eighties, the army received a BGM-71E TOW-2A missile capable of hitting armored vehicles with dynamic protection. To initiate the remote control, a 300-g leading charge is installed on the fuse rod; its presence is compensated by the ballast weight in the tail of the rocket. The main warhead remains the same, but the detonation algorithms have been improved. The onboard equipment was improved, a new pulse tracer was used. 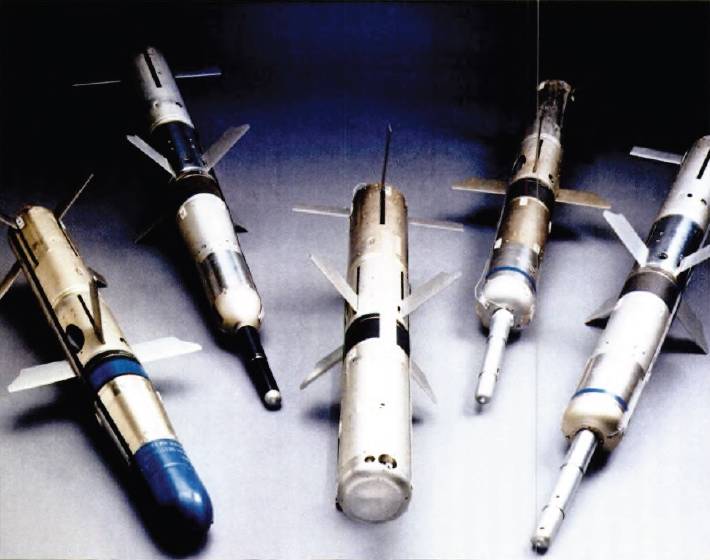 In the early nineties, the BGM-71F rocket appeared with a fundamentally new combat equipment. She received two warheads with a total mass of 6.14 kg, ejecting the so-called. impact core downward when flying over the target. The combination of magnetic and laser target sensors determines the presence of an armored object, after which both charges are triggered with a minimum interval. The target is defeated in the least protected projection. The specifics of the use of such a missile forced to modify the guidance means of the ground part of the ATGM. Due to the new engine and cable reel, the range has been increased to 4.5 km.

Since the mid-nineties, work was underway to create a missile with a high-explosive fragmentation warhead to destroy protected structures. The finished product BGM-71H appeared only in the middle of the two thousandth. It is capable of hitting targets at ranges up to 4.2 km and penetrating reinforced concrete structures 200 mm thick. 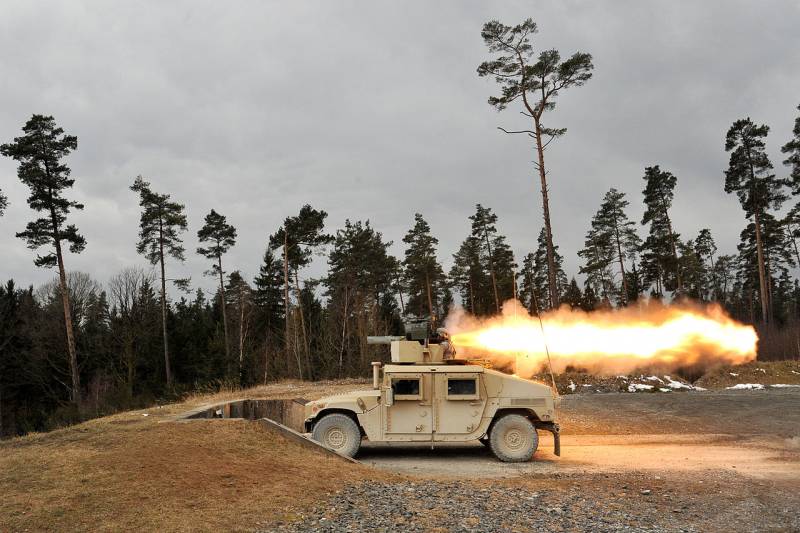 Rocket launch from a launcher on the HMMWV chassis. US Army Photos

In the 2000s, new versions of ATGMs called TOW-2B Aero appeared. In these projects, it was possible to increase the flight range and some other characteristics. In addition, one of the projects provided for the use of radio command control instead of wired. It was assumed that this version of the ATGM has great prospects in the context of helicopter armament.

In production and operation

ATGMs of the TOW family entered service with the United States in 1970, and their export soon began. The production of modern modifications continues to this day; serial products go to the US Army and foreign customers. Some deliveries were carried out within the framework of full-fledged commercial contracts, others as military assistance.

For half a century, several tens of thousands of TOW launchers have been produced in all versions, from portable to aircraft. The total number of missiles manufactured is at the level of 700-750 thousand pieces. The bulk of these products remained in the United States. Iran made a small contribution to the total output. At one time, he bought American ATGMs, and after the revolution he set up their unlicensed production – this is how the Tufan products appeared. 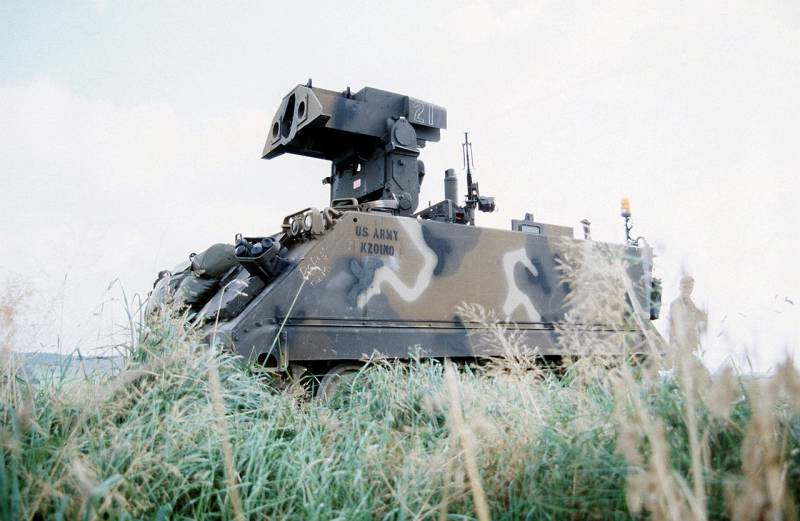 Currently, TOWs of different versions are in service with more than 40 countries. In addition, in recent local conflicts, such weapons are actively used by various non-state and illegal armed groups. In general, at the moment, missiles of the TOW family are one of the most popular anti-tank weapons in the world.

ATGM BGM-71A TOW entered service with the US Army due to the good balance of all the main characteristics and compliance with customer requirements. It was a fairly simple and reliable complex capable of combating the characteristic threats of its time. Due to this, the TOW quickly became the main ATGM of the American army.

The complex had a high modernization potential, and it continues to be used to this day. Old modifications gradually gave way to new ones, which made it possible to obtain an increase in combat qualities without all the difficulties associated with a complete replacement of weapons. The most important factor was the compatibility of the ATGM with various carriers, incl. fundamentally different classes. 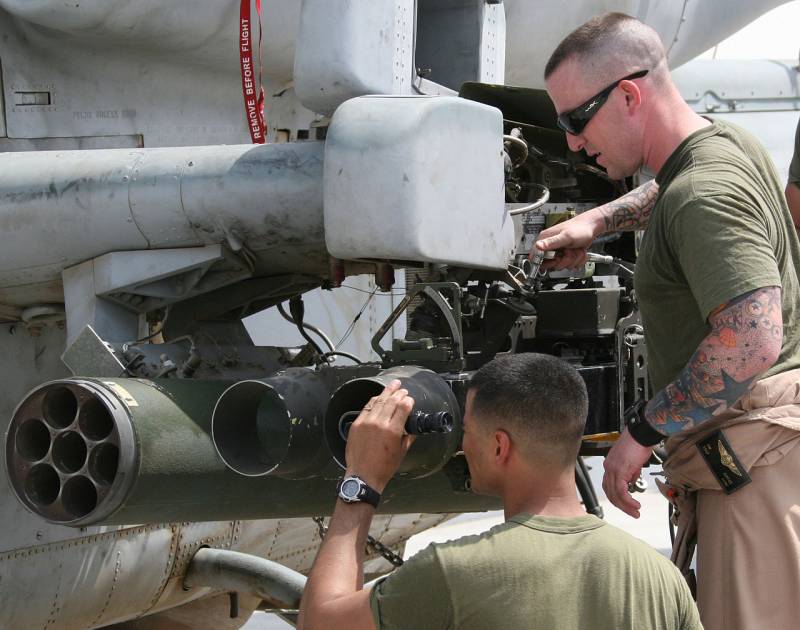 The technical staff of the KMP carries out the installation and alignment of the M220 launcher for the aircraft version of the TOW. Photo by US MC

The reasons for the popularity of BGM-71 abroad are obvious. The United States offered its allies a good and inexpensive modern ATGM system, and they used the opportunity. The commercial success among the partner countries became a good advertisement, and other states became interested in the complex.

As for local conflicts of recent times, the spread of TOW in them is associated with its availability in a specific region. Irregular formations use only those weapons that they can obtain on their own or receive from allies. The latter factor, for example, explains the widespread use of TOW in Syria.

However, in recent decades, the situation on the ATGM market has changed, and TOW products are gradually losing popularity. There are several other lines of similar weapons on the international market, built according to different principles and having the most serious advantages. Even late TOWs cannot always compete with modern Spike or Cornet complexes. 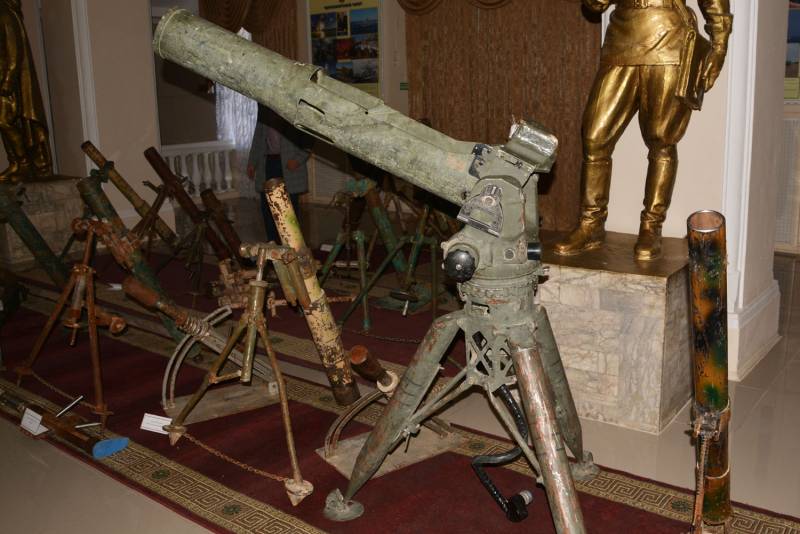 A heavily used TOW launcher along with other trophies taken from terrorists in Syria. Photo by the author

The secret is in a good combination

BGM-71 TOW is a good anti-tank complex that has remained relevant from a technical point of view for several decades. In addition, it shows what results can be obtained by a favorable combination of good design, sufficient performance, economic and political factors. Without all this, TOW would hardly have become so popular and widespread.

The development of the TOW ATGM lasted for several decades and gave very interesting results. However, half a century has passed since the appearance of the first samples of the family, and since then a lot has changed. Missiles of the BGM-71 family no longer fully meet modern requirements and may require replacement. However, while the abandonment of TOW is not expected. These weapons are supplemented with modern models, but not decommissioned. Developed armies and various bandit formations do this. It seems that the history and evolution of the ATGM family will not end on the half-century anniversary.