The Harpoon anti-ship missile was developed in the United States at the height of the Cold War. All-weather ammunition entered service in 1977 and since then has been quite actively produced and has been repeatedly modernized. The missile remains in service with the US Navy and Air Force.

True, interest in this weapon has declined after the end of the Cold War and the collapse of the USSR. In the Navy, the use of these missiles lost their meaning, since the American naval forces were left without a real enemy at sea for many years. Against the background of a lack of adequate calls and an enemy fleet that would have to be sunk in case of conflict, the importance of Harpoon anti-ship missiles was declining.

For this reason, these missiles were removed from service by American submarines for decades. Moreover, American destroyers also often went to sea without Harpoon anti-ship missiles on board. However, the situation is now changing. As reported in February 2021 by the American publication Popular Mechanics, the Harpoon rocket returns to the US Navy submarines again after a 25-year hiatus.

Who will be harpooned?

Obviously, the reason for the return of anti-ship missiles on board American submarines is the fact that such weapons are again becoming relevant. The US Navy once again has a real adversary at sea. But now it is no longer Russia, but China.

At the end of 2020, the Chinese fleet bypassed the American in the number of warships. So far, the US Navy still holds the palm in terms of displacement. But by this indicator, the PRC fleet will soon be able to bypass the American one, especially given the crazy pace of construction of large warships in the Celestial Empire. 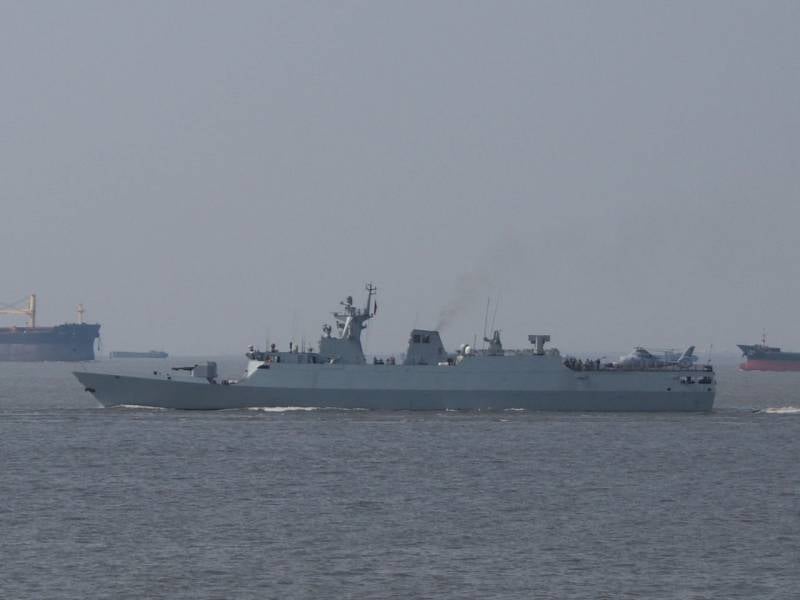 Corvette of the Type-056 project of the Chinese Navy

Recently, China has been building frigates and corvettes in literally dozens a year. It is also important that the Chinese navy and industry have mastered the production of aircraft carriers, which are by far the largest warships. At the same time, the PLA Navy previously already ranked first in the world in terms of the number of frigates, diesel submarines, missile and patrol boats, as well as landing ships (inferior to the American ones in terms of total tonnage and capacity).

According to the Military Balance 2020 compilation, the Chinese fleet has 52 frigates, 28 cruisers and destroyers, 43 corvettes of the Type-056 and Type-056A projects. At the same time, according to data from other open sources, only corvettes of these two types in the PRC were launched 71 units, of which more than 50 ships can be in service. Thus, for the American Harpoon anti-ship missiles, there are indeed numerous potential surface targets.

The cost of returning “Harpoon”

Developed decades ago, the Harpoon missile is becoming a “new” option for the US Navy to counter the growing Chinese fleet. In general, the efforts to return Harpoon anti-ship missiles on board American submarines fit into a number of programs that are already being implemented by the Pentagon as part of various options to contain the growing capabilities of the fleets of China and Russia.

The exact cost of returning missiles to submarine armaments, as well as the total number of missiles purchased, are not yet known. At the same time, the first contract has already been signed. At the end of January 2021, the US Navy signed a contract with Boeing for a total of $ 10.9 million. Within the framework of the signed contract, it is planned to equip multipurpose nuclear submarines of the Los Angeles type with new Harpoon missiles already in the 2021 fiscal year. 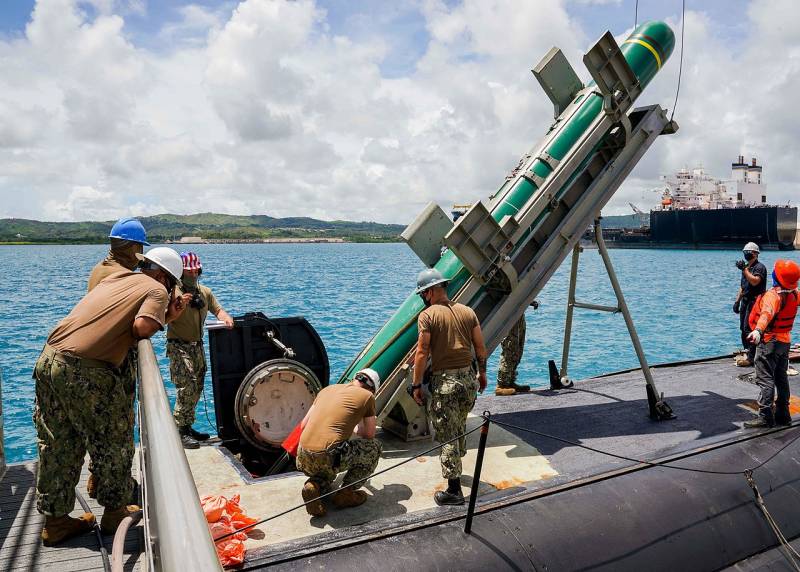 The signed contract follows the successful test launches of the Harpoon anti-ship missile at the target ship from the USS Olympia multipurpose nuclear submarine during the RIMPAC-2018 exercise off the coast of Hawaii. This was the first launch of the Harpoon anti-ship missile system from an American submarine since 1997, when they were decommissioned.

According to the American magazine Seapower, the latest contract is about the repair of at least 20 Harpoon missiles for US Navy submarines. The deployment of UGM-84A Harpoon Block 1C missiles is planned to be carried out on Los Angeles-class submarines. These missiles are designed to be fired through boat torpedo tubes. In service with the US Navy, 32 submarines of this type remain, which makes them the most numerous. At the same time, the boats do not belong to the most advanced American submarines, since they were built from 1972 to 1996.

For comparison, the American press also cites the value of the contract concluded in 2019 by the Naval Air Systems Command, which deals with the logistics and support of the naval aviation of the fleet. The command carried out the repair and modernization of the existing air-launched Harpoon anti-ship missiles in 2018 and 2019. In 2019, a $ 16 million contract was signed with Boeing to upgrade another 79 Harpoon Block IC missiles for naval aviation.

It is worth noting that RIMPAC-2018 became a naval exercise in which Harpoon missiles were widely used, the history of which goes back more than 40 years. In addition to launching from a submarine, missiles were launched from the P-8 Poseidon anti-submarine aircraft of the RAF and from the Singapore Navy frigate. A total of six “Harpoons” were fired during the exercise. 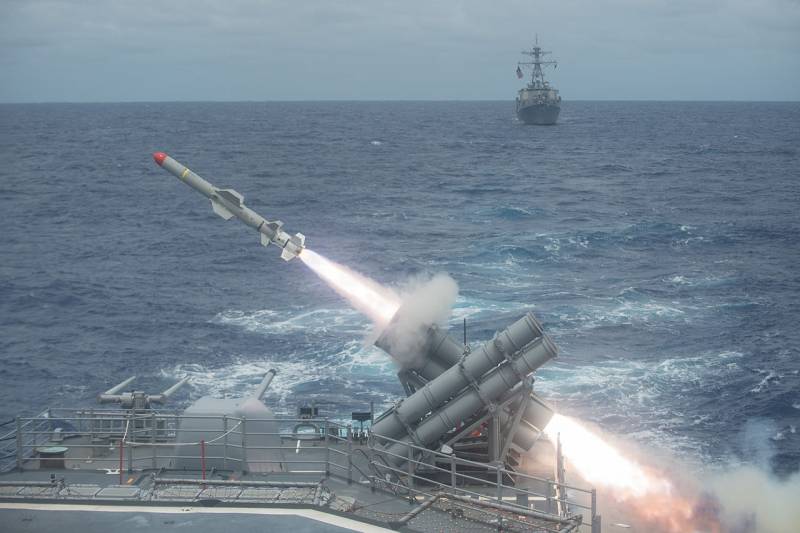 Boeing, a developer and manufacturer of these over-the-horizon anti-ship missiles, emphasizes that the fleet has a large stock of Harpoon Block IC missiles that can be upgraded and upgraded. Sally Seibert, director of Boeing’s cruise missile development, said existing missiles can be refurbished and re-integrated into the fleet in a shorter time frame and at a lower cost than purchasing new missiles. Boeing is ready to work in this direction today.

Harpoon is an American anti-ship cruise missile that has become one of the most widely used in the world. The rocket has been actively developed since the early 1970s by engineers at McDonnell Douglas, which in 1997 merged with Boeing to form the Boeing Company, which became the largest aerospace corporation in the world.

The “Harpoon” rocket is equipped with a turbojet engine and has a subsonic flight speed. The cruise missile is over-the-horizon and all-weather, with a range of over 66 miles and is likely (depending on versions) in the range of 120 to 280 km. The maximum flight speed of the rocket is no more than 850 km / h.

Initially, the Harpoon missile was developed exclusively in the interests of the Navy, but over time, the missile was also adapted for aircraft based. The first serial missiles were deployed in 1977, and in 1983 the missiles were adapted for use from the B-52H bomber. In total, Boeing has produced approximately 7,500 Harpoon anti-ship missiles of all modifications, which are in service with more than 30 different countries. 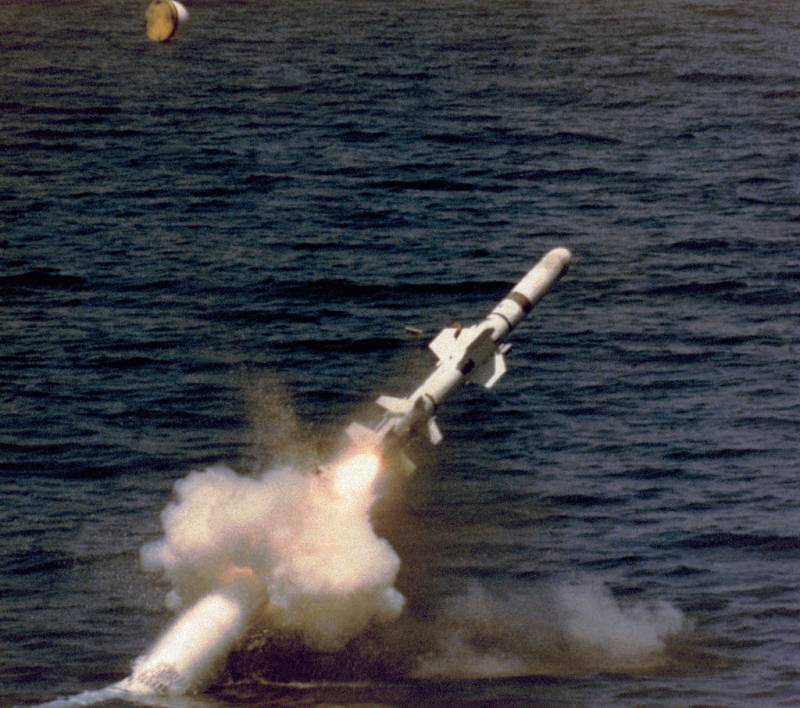 Launch of the Harpoon anti-ship missile system from the submarine

“Harpoon” performs flight at low altitudes, gliding over the sea surface. Before attacking the target, the missile flies at a height of only 2-5 meters, which makes it difficult to detect the enemy’s radar. The missile has active radar guidance to the target. All “Harpoons” were equipped with a penetrating high-explosive fragmentation warhead weighing 221 kg, while the mass of the entire rocket is 691 kg. Initially, the developers implemented two options for attacking surface targets: in normal horizontal flight; with the execution of a slide in front of the target and the attack of the enemy ship from a dive.

ASM “Harpoon” was designed and built according to a normal aerodynamic scheme, the rocket has a modular design and a unified body, a cruciform folding wing and four rudders. The wing of the anti-ship missile is trapezoidal with a large sweep along the leading edge.

The missile is produced in three main versions: aircraft-based AGM-84; shipborne or shore-based RGM-84; option for launching from aboard UGM-84 submarines. RGM-84 and UGM-84 anti-ship missile variants are additionally equipped with solid-propellant rocket boosters. In this case, the underwater missile is placed in a special container that allows launching from the submarine through torpedo tubes.

Boeing is currently actively promoting a variant of the Harpoon Block II Plus rocket with a new inertial navigation system with a GPS receiver and the ability to connect to broadband data transmission channels, which allows target designation to be updated during flight. According to the assurances of the developers, the new versions of the missile have a 7-fold increase in targeting capabilities at once compared to the old Block IC versions that have not been upgraded.