CH-3 is the first UAV of the Tsaihun series. Photo Globalsecurity.org

China is actively engaged in the design and development of unmanned aerial vehicles. In the interests of the armed forces, new models of all major classes are being created. In recent years, heavy-class UAVs with high performance characteristics, capable of reconnaissance and strike, have become widespread. The development of this area continues, and new remarkable results are expected.

Currently, the PRC is one of the world leaders in the construction of UAVs. Hundreds of models and modifications of such civilian and military equipment have been developed and offered to customers. A number of drones of all main classes, including heavy ones, have been adopted by the various branches of the PLA. 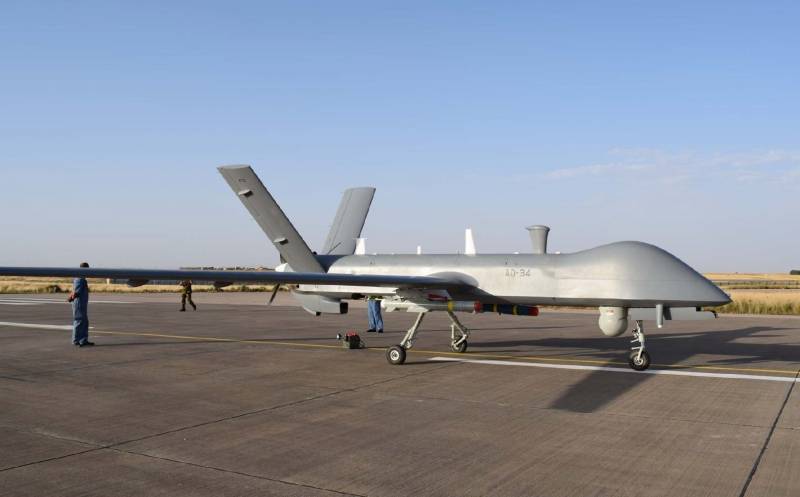 According to known data, UAVs of medium and heavy class entered service with the Air Force, Army Aviation, Navy, Marine Corps, etc. It is reported about the operation of at least dozens of unmanned systems of various types. At the same time, different types of troops can use the same equipment or receive vehicles of different types – in accordance with the specifics of their tasks and working conditions.

Different approaches are used in the development of unmanned vehicles. New independent projects are being developed. In parallel, the development of several families of equipment is carried out, providing for the consistent modernization of finished samples. In addition, research work is underway aimed at creating a fundamentally new technology.

An interesting example of the consistent development of technology and technology is the Caihun (Rainbow) UAV family from China Aerospace Science and Technology Corporation (CASC). Development of the first prototype of this line, CH-1, began in 2000; its goal was to create a medium UAV reconnaissance UAV. Later, the size and weight of the Tsaihun drones grew, and the range of tasks to be solved expanded. In recent projects from CASC, fundamentally new ideas are used. 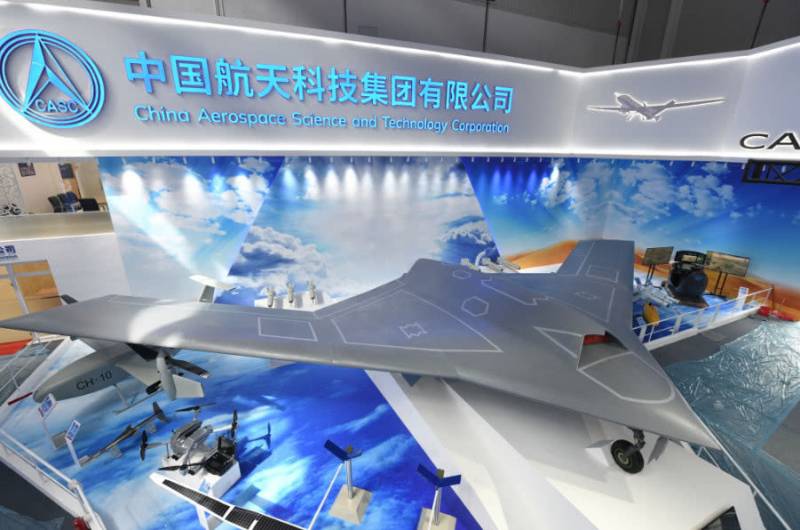 At the moment, the most advanced serial “rainbow” UAV is the CH-4 product. This is a UAV with a take-off weight of 1.3 t and a payload of 350 kg, with a wingspan of 18 m. The flight duration is 40 hours. The CH-4A modification carries only optoelectronic reconnaissance equipment, and the CH-4B project provides for six pylons for weapons … CH-4 is in service with the PLA and is supplied to third countries. This technique has already been used in local conflicts. By further improving the design, the CH-5 UAV was created with a payload of 1 ton, capable of flying up to 60 hours.

In 2021-22. serial CH-7 UAVs are expected to appear. Unlike its predecessors, it will be an inconspicuous “flying wing” with an internal weapons compartment. It is expected that such a device will develop a high subsonic speed and remain in the air for up to 12-15 hours. In other projects of the Tsaihun family, it is envisaged to use a tiltrotor scheme, a double-girder architecture, etc. 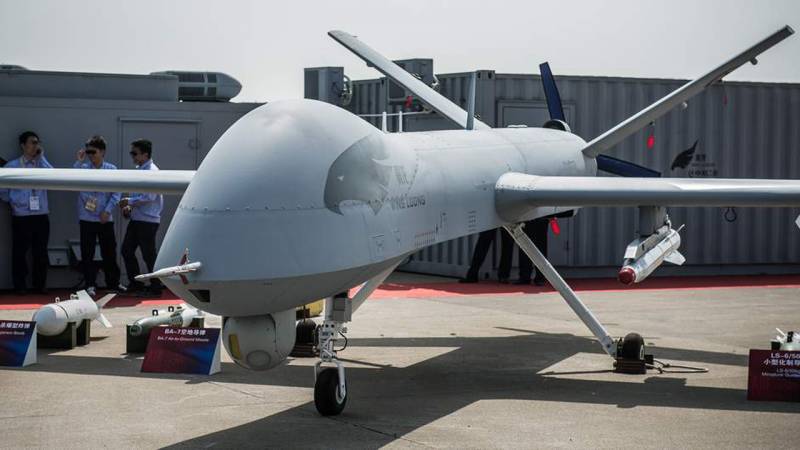 Various models of the “CH” line entered service in 14 foreign countries. The most popular among customers are the CH-4A / B UAVs. Depending on their needs, foreign armies ordered equipment of one or another modification. Probably, the promising CH-7 of a fundamentally new look will also not be ignored – if it is offered to foreign customers.

The Winglun series projects, also known as Chengdu Pterodactyl, are of great importance to the PLA Air Force and other countries. The projects of this line have been developed by the Chengdu Aircraft Industry Group since 2005. In 2009, the Pterodactyl I product made its maiden flight, and in 2011 it was adopted by the Chinese army.

All versions of “Vinlun” are built on a normal aerodynamic configuration with a straight wing and V-shaped tail. The first UAV of the family had a wing span of 14 m and weighed 1.1 tons. The payload was 200 kg. On the basis of the first car of the line, five modifications were created with various features. The differences were related to the composition of the onboard equipment, control principles, the ability to carry weapons, etc. Later projects of the line provide for communication via satellite and have the function of autonomous identification of targets, followed by an attack at the command of the operator. 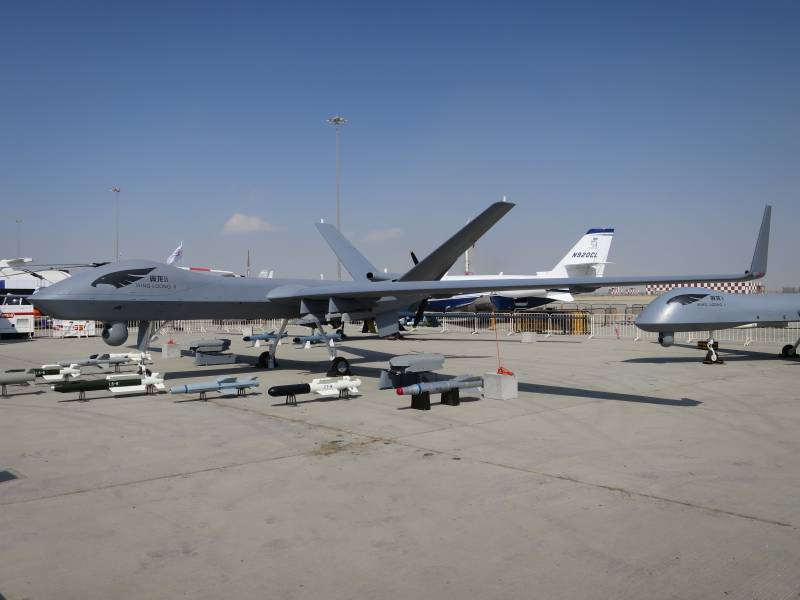 Vinluns at the exhibition. Ahead is the UAV of the second model, behind it is the base product. Photo Wikimedia Commons

In 2017, the Winglun II UAV was put into service. It is larger and heavier (takeoff weight 4.2 tonnes) and also carries a large payload. Provides for the installation of surveillance and sighting radar, complementing the optics. The number of pylons for weapons has been increased to 12. The main functions and capabilities generally remain the same.

UAV “Vinlun I” of various modifications were adopted by the PLA and eight foreign armies. Newer Winglun IIs were purchased by six foreign countries. In total, several hundred UAVs of all versions were built.

In the context of heavy UAVs and the ways of their development, the 601-S program is of particular interest. It is managed by the Aviation Industry Corporation of China (AVIC) in collaboration with other research and development organizations. The goal of the program is to find solutions for creating the UAV of the future. First of all, technologies for reducing visibility are being worked out. Also known about searches in other areas. 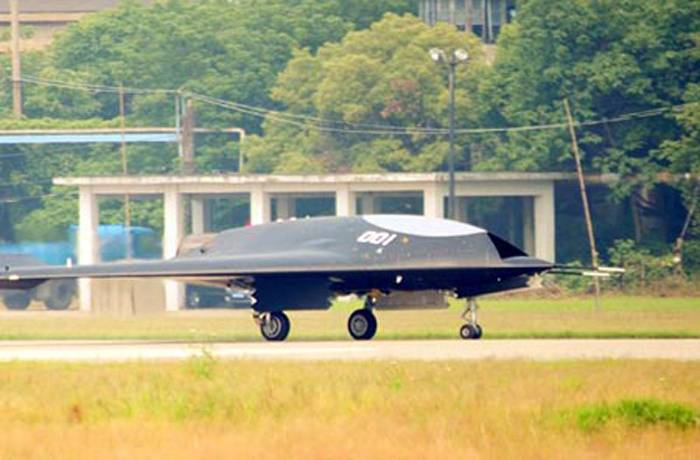 The experimental project “Tiannu” (“Heavenly Crossbow”) provided for the construction of a “flying wing” with a span of more than 2 m and a pair of keels. With its help, the controllability of such a UAV was tested in basic modes. Then the Fenzheng and Yungong vehicles with different controls were tested. It was reported about the development of a “flying wing” swept back.

Approximately in 2013-14. full-size UAVs “Lijian” and “Anjian” were tested. The details of these works, for obvious reasons, were not disclosed. It is believed that the developments on the latest projects of the 601-S series can be used right now to create real reconnaissance and / or strike drones. Any new unmanned “flying wing” of the Chinese design can be expected to be related to the experiences of AVIC and its associates.

By studying foreign developments and creating their own projects, the PRC was able to narrow the gap with foreign countries in the field of unmanned aerial vehicles over several decades. Moreover, we even managed to enter a narrow circle of leaders who possess all the key technologies and continue their development. 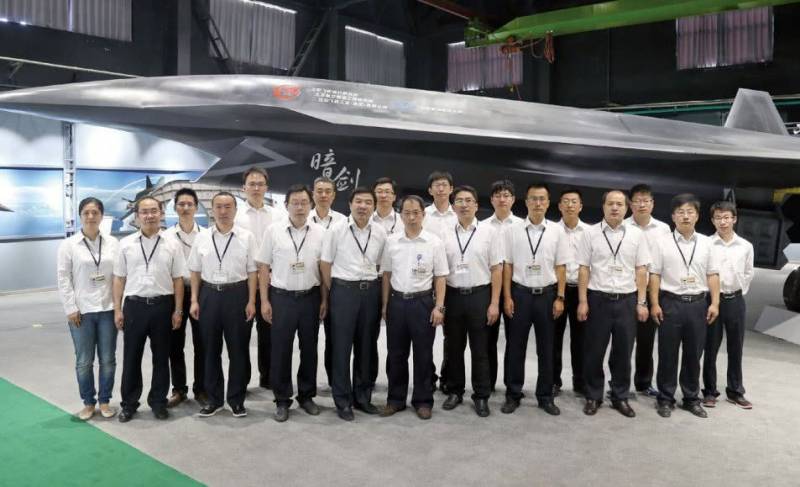 The efforts of different organizations and enterprises create both individual projects and entire families based on common ideas and solutions. At the same time, there are both projects for subsequent implementation and exclusively experimental developments. Judging by the known data, the latter made it possible to create the groundwork for several important breakthroughs. They will probably be implemented in the coming years.

It is curious that the results of scientific and technical activities are used not only to modernize their armed forces. Having developed a lot of new projects of various kinds, China gets the opportunity to enter the international market and successfully compete with other leading countries in terms of the number of equipment sold.

In general, the development of the UAV direction in China is of great interest. Chinese industry was able to concentrate efforts in a limited time, master and develop new technologies for itself, as well as take leadership positions. Obviously, such processes will not stop. The result of this will be the strengthening of the existing unmanned “air fleet” of the PLA and other armies, as well as the emergence of new models of equipment with certain curious features.