When I sing about wide open spaces
About the sea, calling to foreign lands.

About the gentle sea, about happiness and sorrow,
I sing about you, my Odessa!
(Isaac Dunaevsky. Operetta “White Acacia”)

Monument to NI in Odessa

Military glory of Odessa. I’ll start, perhaps, with the fact that as a child I was very fond of operetta. He knew all the operettas that were shown on TV, watched with pleasure “Rose-Marie” by Friml and Stotgart, operetta by Kalman and Strauss, “Free Wind” (both the film of 1961, and the very production of I. Dunaevsky), and “Kiss of Chanita” by Yuri Milyutin and Evgeny Shatunovsky.

And among them one of my favorites was “White Acacia” by I. Dunaevsky, where there was a very funny negative character Tuzik, played by actor Mikhail Vodyanoy, better known as Popandopulo from the film adaptation of Boris Alexandrov’s operetta “Wedding in Malinovka”. And there was a very beautiful song there, which I really liked.

So, when, after the end of the 9th grade, I was offered with a group of schoolchildren-activists from the Penza Palace of Culture im. Kirov to go to Odessa, I, of course, agreed. Two weeks in Odessa was wonderful. The sea, the sun, excellent popsicles, museums, the Odessa theater, the catacombs – all this was shown to us.

And also … we once drove past a strange monument. The guide told us:

“And this is the tank” NI “-” Fear “. During the war, Odessa residents made such tanks from tractors and smashed the German fascist invaders with them! “

But this tank (which looks more like a box) did not make an impression on us then. We looked at him and … drove on.

Model of the tank “NI” in the “rubber kit” version, produced in the 90s by the Penza enterprise NIIFI. Scale 1:35

This is how I first saw this tank on a pedestal and then completely forgot about it.

And then 1989 came. I became a member of the British Association of Armored Vehicle Modelers M.A. FVA And the British asked me to write them an article about some little-known Soviet tank.

And then I remembered that in the special depositories of the Lenin library I saw a book by Stephen Pledges about Soviet armored vehicles. And there are projections of this unusual tank. I wrote to Odessa to the museum, to DOSAAF. I took a referral from them to the special depositories of the Lenin Library, received a coveted book with a particle board stamp and with my tank “NI” or “Fear”. Based on material from the book Pledges, plus what was sent to me from the museum in Odessa, plus drawings made from photographs, my very first article in the magazine “Tanchette” turned out. And the British liked it.

Then I collected everything I could on this tank. Photographed his remakes in Kiev and Kubinka. And he wrote about these armored men already in the magazine “Tekhnika-Molodezhi”.

And then our Penza became famous already in the 90s as a center for the production of “rubber kit” models. Five firms then made such models in our country.

And among them there was even such a large enterprise as the Research Institute of Physical Measurements, which was engaged in the production of measuring sensors for our spaceships. But he needed currency, so they invited me to earn it for them.

And I suggested that they again produce models of tanks “NI” in the “rubber whale” version. One tank according to the drawings of S. Zalogi, and the other – according to our drawings based on photographs already published by that time in the magazine “Tankomaster”: “NI-1” and “NI-2”.

People from Switzerland and England came directly. We gave them vodka to drink. And they sold our “NI” boxes. And there, at home, they were already reselling them for $ 80. And everyone was happy.

And then complaints about the deteriorated quality were sent from the West. And our models stopped buying.

I began to look for the reason. And it turned out to be the same “scoop” that had eaten into the flesh and blood of our workers. The fact is that injection molds wear out gradually. And then it is necessary to make new ones according to the master model. But this master model is locked in the production manager’s safe. I have to go to the second floor and ask.

And so our workers got into the habit of removing the molds from the last casting. Naturally, defects accumulated on the castings. But at first they did not go beyond a certain amount, and consumers did not notice the loss of quality. And here – with each new casting, the dimensions “walked” more and more. And it all ended with the fact that the parts completely ceased to dock with one another. Complaints and critical articles poured in. And the models eventually stopped ordering.

Now you can put video cameras and track the work in the shop. But then such devices did not exist yet. And by the time I figured out what was going on, the production of “NI-1” and “NI-2” had already simply perished. Well, I could not even imagine that people “saw the branch on which they were sitting”. It turns out that this was possible with us. Then the management of NIIFI signed a number of lucrative contracts for “serious products” and did not resume the production of models. 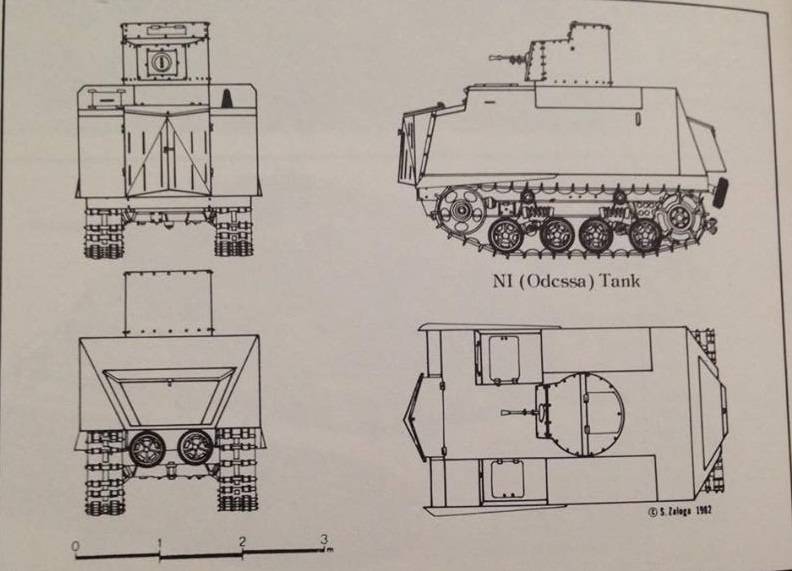 In the 80s, this scheme of the “NI” tank from the book of S. Zalogi and J. Grandsen was almost a revelation. But the book itself was in the special storage of the Lenin Library, and it was impossible for “ordinary people” to get it.

“For my native Odessa!”

I am very sorry that then I had a film camera, and the photos he took of dioramas with these tanks completely faded, like the film itself. On one – the tank “NI” with the inscription on the armor “For native Odessa!” walked through the rows of barbed wire, and together with him sailors and soldiers from the first sets of our firm “Zvezda” fled into the attack. On the second diorama, Romanian soldiers were already sitting in the trench, and the NI tank and our sailors were crushing them with terrible force. There were no kits of Romanian soldiers at that time, but again I made them myself – from “zvezdinites”.

So “NI” had a chance to play a rather noticeable role in my life, and gradually information about it was accumulated on a quite decent article for VO.

First of all, we note that the “NI” was one of the many makeshift tanks during the Second World War. Due to a shortage of tanks in Odessa in 1941, Soviet workers at one of the Odessa factories began to produce it on the basis of a tractor. And it turned out that, despite their primitive design, these tanks achieved excellent combat results in battles with Romanian soldiers. Their cultural significance and symbolism (in the post-war Ukrainian SSR and in the USSR as a whole) is confirmed by the creation of at least four replicas (although each very inaccurate) and two films dedicated to the defense of Odessa with these tanks as the basis of the plot.

Interestingly, “NI” had no official designation. In the book “Soviet Tanks and Fighting Vehicles of the Second World War” by S. Zalogi and J. Grandsen, very little has been written about it, and as far as its name is concerned, there is complete confusion.

The overwhelming majority of reliable information about the tank is taken from the memoirs of Marshal of the Soviet Union Nikolai Ivanovich Krylov “Eternal Glory, Defense of Odessa, 1941”. During the defense of Odessa, he was a colonel and held the position of chief of the operational directorate of the army, and after August 21, 1941 – chief of staff of the Primorsky army. His memoirs contain excellent first-hand evidence. And others simply do not exist, since after the capture of Odessa by German-Romanian troops, all Soviet archives were destroyed. 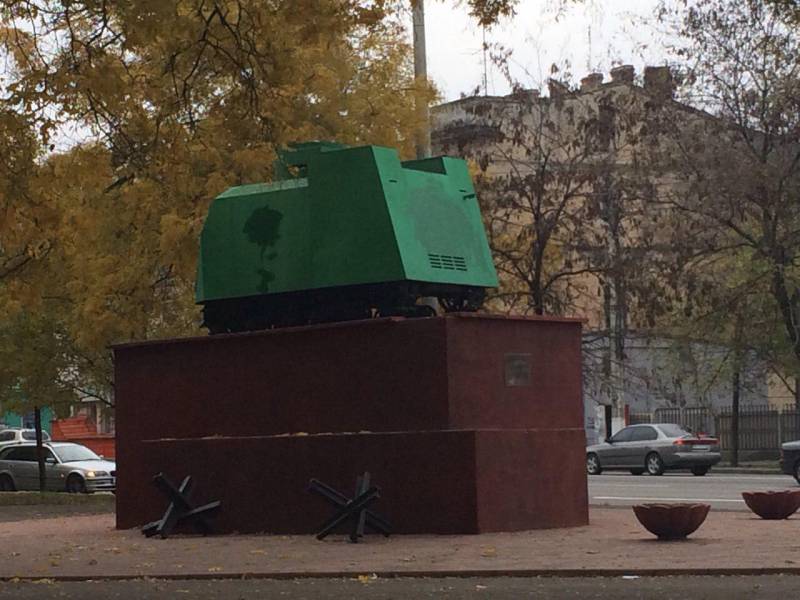 In 1941, due to a sudden enemy offensive, most factories in dangerous areas (such as Odessa) were evacuated along with most of their heavy equipment. The few remaining machines in Odessa were to be used to repair tanks, but no more. There was an acute shortage of skilled labor, because the men were drafted into the army. This meant that women and untrained youth worked in factories.

Nevertheless, by the end of August, twenty Odessa factories began mass production of a variety of weapons. For example, improvised trench flamethrowers from carbonated water cylinders and even anti-tank and anti-personnel mines from tin cans (hence their somewhat humorous names “Caviar”, “Halva”, etc.).

In general, the Red Army suffered greatly in Odessa from a lack of firepower and (especially) a meager number of tanks. At the beginning of the war, there were about 70 tanks, mainly T-37, T-26 and BT. But most of them were shot down as a result of fierce fighting on the outskirts of the city in the first days of the siege, because the Romanians attacked the city almost daily. These 70 tanks were repeatedly repaired and even subjected to additional armor.

Krylov recalls that at least three damaged tanks were loaded onto trucks and sent to the rear of the Soviet troops for repairs at the Yanvarsky Vosstaniya plant. 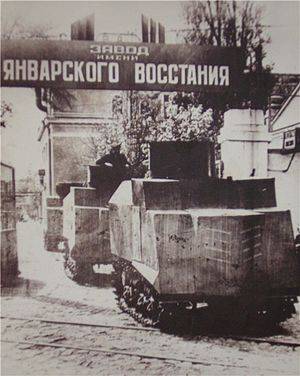 A shot from a staged film dedicated to the defense of Odessa. Tanks “NI” leave the factory

Tanks from tractors: “Yanvarets” and “Chernomor”

The mechanical plant “Yanvarsky Vosstaniya” was, perhaps, the most equipped plant in Odessa. And by that time he had already produced a thousand 50-mm and two hundred 82-mm mines for mortars, as well as at least one makeshift armored train. And here on it P.K. Romanov (chief engineer of the plant) and captain U.G. Kogan (an engineer for artillery devices, later transferred to the headquarters of the Odessa defense region) decided to turn several tractors into tanks.

The idea of ​​”tractor tanks” was met with some disbelief. But three STZ-5 tractors were still allocated for the experiment. Captain Kogan received a letter stating that all city organizations should help find the necessary materials for this experiment. A drilling and lathe was found in the local tram workshop, and the necessary welding equipment was also obtained. It is unlikely that it was planned to standardize their production from the very beginning. But several photographs of “NI” that have come down to us show us a fairly high level of such standardization.

The first three NI tanks were ready within ten days and were presented to the military on August 20. The first two of them were armed with two DT machine guns, and the third – a 37-mm mountain cannon. This is stated in two films, and researchers cite it as historical fact.

According to another source, a worker wrote Death to Fascism on the side of the tank in chalk. It is reported that two more released tanks “NI” were called “Yanvarets” and “Chernomor”.

According to newsreels, the tank left the factory and was immediately presented by the factory workers to the officers and sailors. The tank demonstrated a 360-degree turn. Due to the engine rattling, it made a terrible noise when driving.

Prototypes “NI” (which at that time were not yet called) were sent to the southern defense sector of the city along with the repaired “real” tank. But what kind of tank it was is unknown.

There is no exact data on when exactly the tanks were tested in battle. But according to combat reports, it may have happened between August 28 and September 3.

The NI tank crews consisted of volunteers – sailors, soldiers, and reportedly even factory workers familiar with the vehicles.

After the first tractor tanks returned after a successful baptism of fire, the Military Council immediately ordered the construction of 70 more such tanks. Why their production was organized at three more factories.