In 2012, the lead patrol ship, pr. Holland, entered the Royal Netherlands Navy. In the future, three more such ships were handed over to the fleet. At the moment, they are serving and protecting the exclusive economic zone both in the North Sea and near territories in the Caribbean.

In 2005, the military-political leadership of the Netherlands approved a new strategy for the development of the KVMS. Among other things, the document offered to write off and sell several frigates pr. Karel Doorman. The money from the sale, supplemented by the savings in operating funds, was to be used to build new types of ships, including several patrol ones. Such units were considered more useful and valuable for defense in the foreseeable future.

In December 2007, the military department and the shipbuilding company Damen Shipyards Group signed an agreement to develop a new patrol ship project with the subsequent construction of four hulls. The total cost of the work was estimated at 467.8 million euros. The project was named Holland after the lead ship.

The customer demanded to create a multipurpose warship with artillery and machine-gun armament for use in the coastal zone against surface and air targets. The radio-electronic complex should have been made as automated as possible and the crew had to be reduced to 50 people. There were special requirements for protection and survivability, for living conditions, etc. At the same time, the ship could do without stealth technology. One of the main requirements stipulated the minimum cost of construction.

Under the terms of the 2007 contract, the construction of the ships was to be carried out at two sites of the contractor company. On December 8, 2008, construction of the lead ship Zr.Ms. began at the Damen plant in Vlissingen. Holland (P840). In February 2010, it was launched, and in May 2011 it was handed over to the customer. The second ship in the series, Zr.Ms. Zeeland (P841) has been under construction since October 5, 2009 and was launched in November 2010. In October of the following year, it was handed over to the fleet.

In November 2009 and April 2010, the construction of the ships Friesland (P842) and Groningen (P843) began at the Damen Shipyards Galați (Galati, Romania). They were completed in 2011-12. and then surrendered to the fleet.

An interesting fact is that the KVMS accepted new ships in incomplete configuration. After acceptance, they were sent to the plant in Vlissingen, where the integrated IM-400 mast structure was installed on them. After that, starting in 2012, the ships were in service. In mid-2014, all four Holland-class ships entered service and reached full combat readiness. 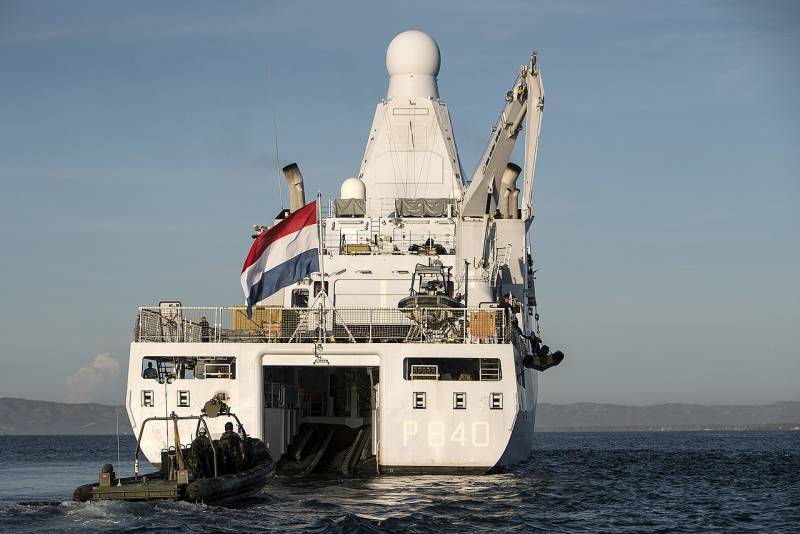 “Holland”, a view of the stern

During the development of the Holland ships, the experience of previous projects was taken into account, rethought taking into account new requirements. These ships are 108 m long and 16 m wide, with a normal draft of 4.55 m and a displacement of up to 3,750 tons. The hull design ensures operation in the coastal and oceanic zones. The sides of the superstructure smoothly mate with the hull. Armored and reinforced units, duplication of systems, etc. are widely used in the design of the ship.

The ships received a power plant of the CODELOD type – combined with a diesel or diesel-electric propulsion. It includes two diesel engines MAN 12V28 / 33D with a capacity of 5400 kW and two electric engines of 400 kW each, receiving energy from a plant with three generators of 968 kW each. Diesel and diesel-electric motors are used interchangeably. They are coupled to a gearbox that delivers power to two propellers. There is a bow thruster.

Holland can reach speeds of 21.5 knots under the main diesels. The patrol uses diesel-electric travel at a speed of 15 knots. At the same time, the maximum cruising range reaches 5 thousand miles. Main rudder and thruster provide high maneuverability.

General ship systems and main mechanisms are controlled by the integrated control system developed by Imtech Marin. An important feature is the abandonment of the usual consoles at the posts in favor of multipurpose access points throughout the ship. An automated data processing and control system is used on the navigating bridge, so that only two people can carry the navigational watch. 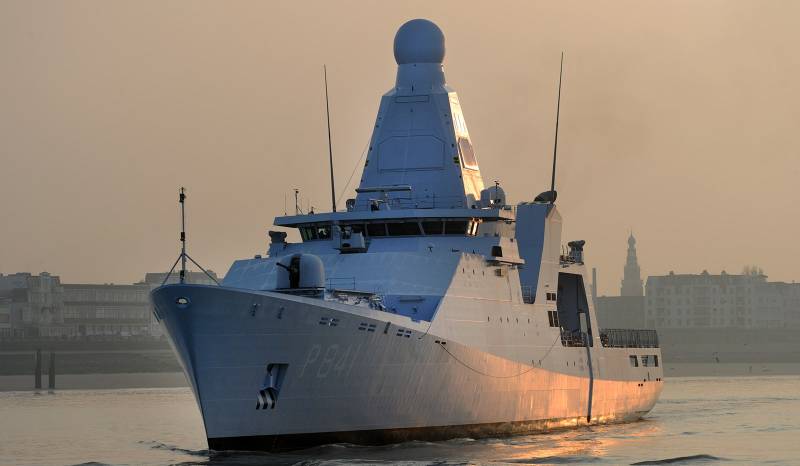 The Combat Information Center is organized on the basis of BIUS and a number of automated workstations. The reception, processing and issuance of the maximum possible amount of information is provided, as well as weapons control. In terms of software, the CIC for the Hollands is unified with the centers of other modern ships.

The main electronic systems of the ship are located on the IM-400 mast structure developed by Thales Netherland. Various radar antennas, communications, etc. are placed under the pyramidal-shaped radio-transparent casing. The observation of the air situation is provided by the SeaMaster 400 SMILE radar, the surface situation is monitored using the SeaWatcher 100. There is an optical-electronic station GateKeeper. The ship is capable of tracking up to 1000 targets at ranges of up to 250 km, as well as aiming weapons at them.

In the stern of the superstructure there is a hangar for the NH-90 helicopter. Takeoff and landing are carried out at the stern platform. The helicopter is proposed to be used in search and rescue and other missions that do not require special equipment or weapons. The superstructure has space for the transport of two motor boats. Another boat is stored under the flight deck. There is a place for a standard container with certain goods. A crane is located behind the superstructure on the starboard side. 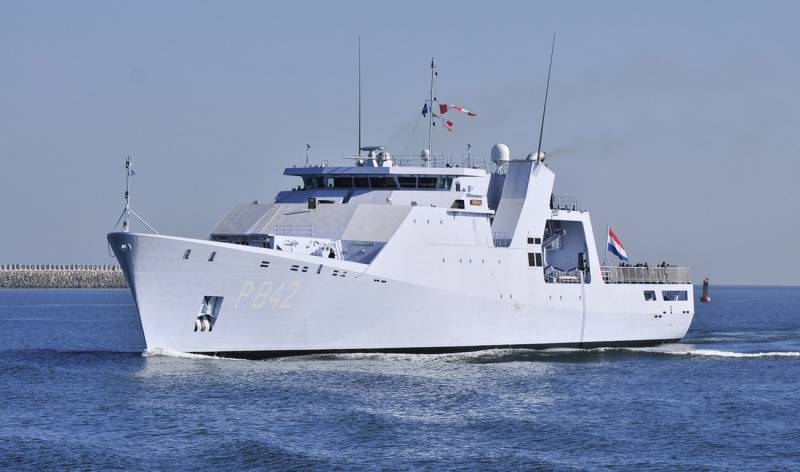 The crew includes 50-54 people. – almost three times less than on the Dutch ships of previous projects. The crew is accommodated in cabins for officers, foremen and sailors. Additional rooms for 40 people are provided under the hangar deck. The autonomy of the ship in terms of reserves is 21 days. An interesting innovation of the project is the galley, which is optimized for the use of semi-finished products without direct cooking on board.

Lead ship Zr.Ms. Holland (P840) received all the necessary equipment in 2012 and began service. Within two years, he was followed by three more combat units. They almost immediately began to be attracted to patrols in the North Sea, in the exclusive economic zone of the Netherlands. This service continues without any big news. The most interesting events are participation in international exercises and escorting foreign warships.

Since 2014, Holland ships have been working in shifts in the Caribbean, near the Netherlands. The specificity of the region leads to remarkable results. For example, in June 2014 the ship Zr.Ms. Groningen (P843), along with the US Coast Guard, took part in the interception of the drug mafia boat. The crew of “Groningen” detained the criminals, and also lifted the cargo they had thrown out of the water.

In 2015, Holland patrol ships took part for the first time in an international anti-piracy operation near the Horn of Africa. Independently and in cooperation with foreign colleagues, the Dutch sailors were able to repel several pirate attacks on merchant ships.

The Holland project was developed with the aim of providing patrolling of certain water areas in the near sea zone. The new ships were supposed to monitor the situation, identify various objects and, if necessary, use weapons. Due to the nature of the threats in the North and Caribbean Sea, the Hollands did not need powerful strike weapons and received only artillery and machine guns. At the same time, sufficiently developed electronic weapons are used. 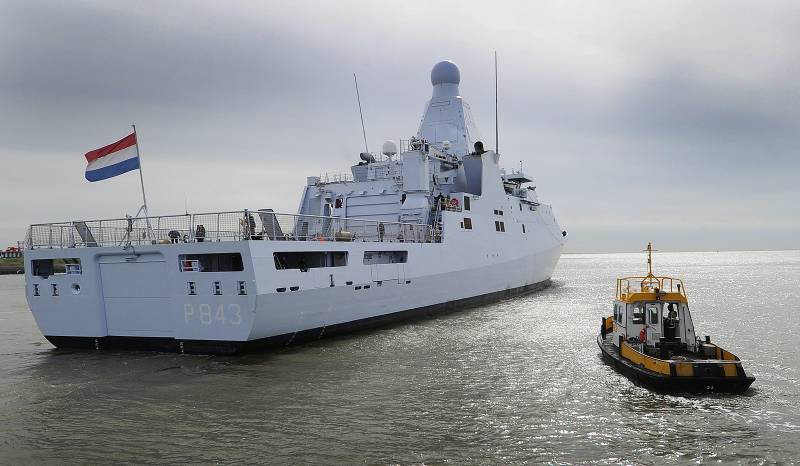 The experience of operating four ships shows that such a composition of equipment and weapons is sufficient to perform the main functions – search and capture of intruders, protect water areas from pirates and other threats, etc. At the same time, the modernization of ships with the replacement of weapons and the expansion of combat capabilities is not possible without a radical restructuring. However, such modernization is not planned, and shock functions are assigned to other ships.

With the advent of the Holland-class patrol ships, the Netherlands KVMS received a modern specialized tool for protecting shores and coastal waters, protecting shipping, etc. Such ships fully comply with the requirements, and also have an optimal ratio of tactical and technical characteristics and operating costs, which will allow them to remain in service for a long time.