The Vietnam War is familiar to many exclusively from films. An important part of our perceptions and memories of this war are helicopters, which the Americans used in large quantities. At the same time, the mosquito fleet was also widely used in Vietnam, which moved along the rivers, providing patrolling, reconnaissance and delivery of goods.

One of the brightest films that combines two important sides of the Vietnam War is the famous film by director Francis Ford Coppola “Apocalypse Now”. Much of the feature film takes place aboard a PBR-type river patrol boat that travels along the Mekong River.

At the same time, in Vietnam, the American military also used less typical hovercraft with various weapons and equipment. One such hovercraft was the PACV SK-5 (Patrol Air Cushion Vehicle) patrol boat, which was used extensively in the riverine and wetlands of Vietnam from 1966 to 1970.

The large and clumsy hovercraft initially surprised the Viet Cong fighters. Representatives of the US Navy were no less surprised. True, there was a certain effect from the use of such vessels. No other ship could, at a speed of 70 miles per hour, overcome river jams from felled trees, cut down small trees and bushes and overturn local wooden flat-bottomed sampans.

The Patrol Air-Cushion Vehicle, or PACV for short, was based on the Bell Aerosystems SK-5 hovercraft. In Vietnam, this unusual ship served from 1966 to 1970. It is worth noting that Vietnam for the United States in those years was an ideal testing ground, which made it possible to test a wide variety of military equipment and weapons in real conditions. It was in the Mekong Delta that the US military received the first and so far the only experience in the combat use of hovercraft. 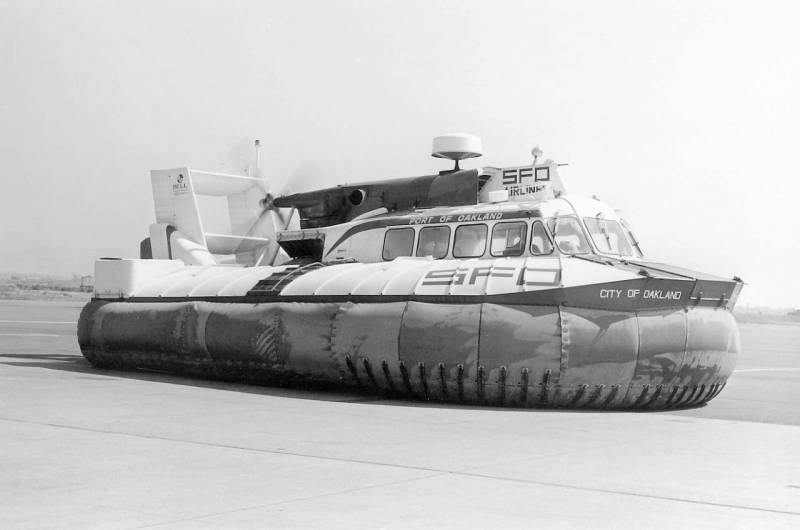 Civilian version of the SR.N5 hovercraft

It is worth noting that the Americans were not pioneers in this matter. The first such ships were used in battles by the British military. It was Great Britain that was considered the pioneer in the West in the development of such technology. The British already had experience in the combat use of hovercraft against guerrillas in Malaya.

In 1965, based on this experience, the US Navy decided to purchase three SR.N5 ships from Great Britain. In the United States, the ships were to be licensed by Bell Aerosystems, which adapted the ships to the needs of the US Navy and modernized them by placing weapons on board. The resulting version of the hovercraft received the designation SK-5 in the US Navy.

The design of the military versions of the licensed ships was fully completed already in 1966. The training of the first crews was carried out directly in the United States near the resort town of Coronado in the San Diego Bay and the surrounding area. In the same year, in May, these ships were first deployed in Vietnam. The US Navy used armed hovercraft to patrol the Mekong Delta and the river itself.

PACV SK-5s were widely used along estuaries and deltas, including on the high seas. And they were especially useful in swampy shallow water areas that were inaccessible to river patrol boats. At the same time, the crew of the hovercraft was often supplemented by American special forces or Vietnamese rangers from South Vietnam.

The green berets hovercraft were especially fond of, which in the early stages of combat missions in late 1966 achieved notable success through their use.

Speed, maneuverability and good firepower allowed the PACV SK-5 to solve a wide range of tasks. In addition to patrolling, they were used to search and destroy enemy groups, escort other ships, conduct reconnaissance, medical evacuation, transport heavy weapons and direct infantry fire support. An important advantage of the ships was that they could operate where ordinary boats could not pass and helicopters were not able to land. 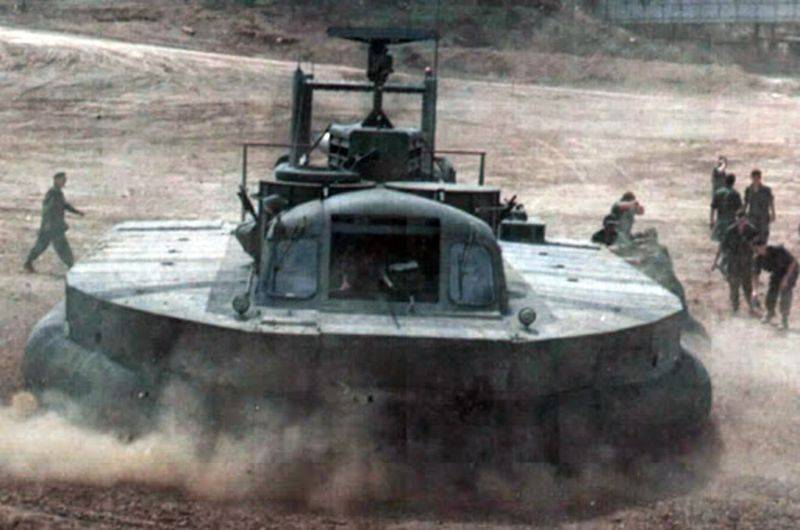 Army boat ACV 903 is being tested after construction

Hovercraft were actively used for ambushes and high-speed night operations. True, the cars were very noisy and they often did not have to count on surprise. Despite this, PACVs were effective during surprise attacks on Viet Cong bases, managing to escape before the enemy organized serious resistance. It was also noted that the boats were most effective during combined arms operations involving helicopters, artillery and other vessels.

The PACV SK-5 hovercraft were quite sophisticated machines for their time. They were much larger than the standard PBR Mk.2 river patrol boats.

Soldiers of the South Vietnamese army gave the boats the call sign “monster”. Around the same time, their noses were adorned with painted jaws, which were supposed to enhance the psychological effect of the use of unusual vessels.

The crew of each boat consisted of four people: a driver, a radar operator, and two machine gunners. Additionally, each boat could take on board up to 12 military personnel with weapons, however, most of them would have to sit on the open deck.

The boat was driven by a General Electric 7LM100-PJ102 gas turbine engine, which could develop power up to 1100 hp. from. Engine power was sufficient to provide the hovercraft with a maximum speed of 60 knots (approximately 110 km / h). The stock of fuel tanks with a total volume of 1,150 liters was enough to cover 165 nautical miles (approximately 306 km). The power reserve was approximately 7 hours.

The military version of the ship, designated Air Cushion Vehicles, was heavier and better armored. Since it was originally intended for assault operations, the armor and deck were reinforced. The total weight of the armor was 450 kg, which was comparable to the weight of the armor of the M113 armored personnel carrier. 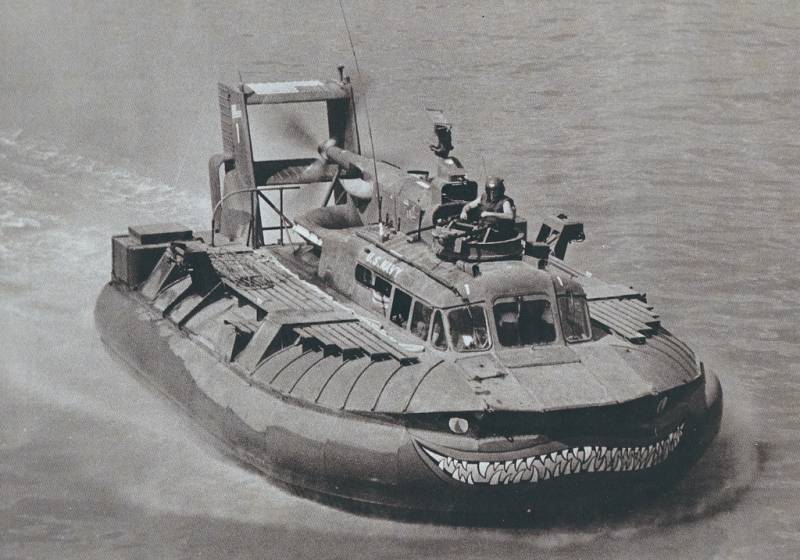 At the same time, the transmission, engine and fuel tanks were covered with armor that could withstand a hit of 12.7 mm ammunition from a distance of 200 yards (approximately 180 meters).

All PACV SK-5 hovercraft were armed.

The main armament of the ships was the installation of twin large-caliber 12.7-mm M2 Browning machine guns in the tower located on the roof of the conning tower. Auxiliary armament was represented by two 7.62 mm M60 machine guns on the starboard and port side. These machine guns were placed on helicopter-type installations. Also on some of the ships one could find 40-mm M75 automatic grenade launchers.

A feature of the PACV boats was the presence of a full-fledged radar, which made it possible to use them at night. Each vessel carried a Decca 202 radar with a dish antenna. This radar could detect targets at a distance of up to 39 km. For navigation in poor visibility and fog conditions, this was a significant advantage.

PACV SK-5 problems and the termination of their combat use

Hovercraft were used by the US Navy in Vietnam from 1966 to 1970. Based on the results of this period, it was concluded that their operation was too expensive, and the ships were not reliable enough and required serious technical maintenance. For this reason, since 1970, they have been placed at the disposal of the US Coast Guard.

In total, only three naval PACVs and the same number of army ACVs were used in Vietnam over the years. At the same time, the army boats were represented by AACV assault vehicles (both lost in battles) and one transport vessel. Because of their speed, agility and ability to move confidently over rough terrain, they have often been compared to helicopters. But the problem was that this was true both for the cost and the complexity of their technological maintenance. 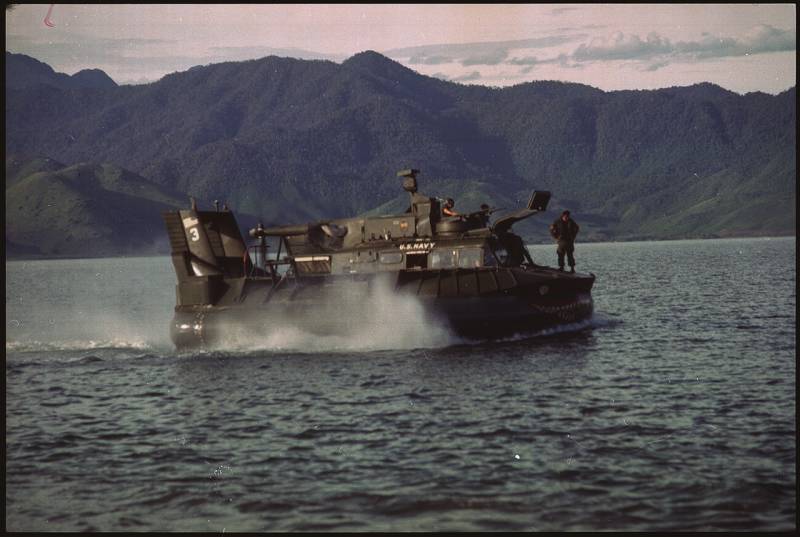 The operation of sophisticated equipment required very high qualifications from the crew and repairmen. It took up to 75-100 hours to train the crew, only after that it could be allowed to take part in combat operations. At the same time, a huge disadvantage of the PACV was that each hour of operation of the hovercraft then required 20 hours of maintenance, which is comparable to the values ​​for the C-17 Globemaster III heavy transport aircraft.

Unsurprisingly, all three naval PACV SK-5s rarely found themselves in combat readiness at the same time. The operational readiness of the hovercraft was typically just over 55 percent. If the boats were damaged in battle, the period of their maintenance only increased.

The ships cost one million dollars. This amount would be enough to buy 13 PBR river patrol boats.

Over time, the lack of armament of the PACV was also attributed to the disadvantages. The capabilities of large-caliber machine guns were not enough to deal with armored targets and fortified firing points.

The military offered to expand the armament, supplementing it with 20-mm automatic cannons (the possibility of installing a six-barreled M61 Vulcan cannon was also considered), a TOW anti-tank system or a 106-mm M40 recoilless gun.

However, these wishes were not implemented.

And in the end, it was decided to transfer the ships to the coast guard, curtailing their combat operation.