General view of the torpedo Chariot Mk I

In 1942, the special forces of the Royal Navy of Great Britain entered the newest human-guided torpedoes / ultra-small submarines of the Chariot type. This technique was intended for sabotage and covert destruction of enemy ships in ports and on roadsteads. For a number of reasons, the results of its application have been mixed.

The idea of ​​a human-controlled torpedo appeared in Great Britain before the war, but did not receive the required support in the early years. Only in 1941, after several successful attacks by Italian combat swimmers, the British command ordered the development of their own samples of this kind. The first “torpedo” was named Chariot Mk I (“Chariot”, type 1).

The Chariot Mk I had a cylindrical body 6.8 m long with a diameter of 0.8 m and weighed less than 1600 kg. The head fairing held 272 kg of explosive and could be dropped for suspension under the bottom of the target ship. In the center of the hull there was a battery and a ballast tank, and outside there were two places for combat swimmers with a control station and boxes for various equipment and tools. In the stern were an engine with a propeller and rudders. 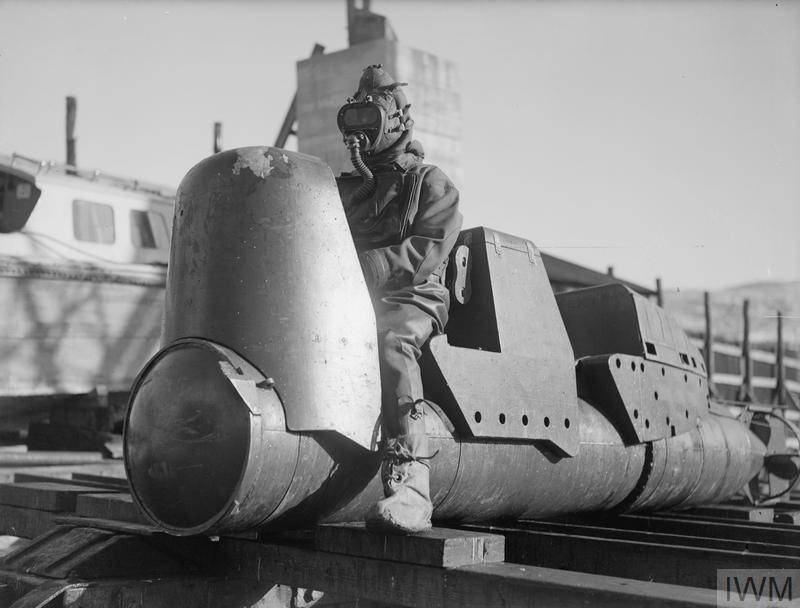 The crew of two received special diving suits that provided the necessary protection and ease of operation with a minimum weight. Closed-loop breathing apparatus were also developed, which made it possible to stay under water for 5-6 hours. The actual range of the torpedo was determined precisely by the characteristics of the breathing apparatus.

It was proposed to deliver the Chariots to the area of ​​the combat mission using boats or other vessels, submarines or seaplanes. The latter option was rejected almost immediately. In real operations, boats and submarines were used. The latter were equipped with special containers for the transport of torpedoes; preparation for sailing could be carried out on the surface and underwater.

By the end of 1942, the improved Chariot Mk II torpedo submarine had been developed. She received a longer body with an extended charging compartment for 680 kg of explosives. Two places for swimmers fit inside the body; if necessary, they were protected by a light transparent lantern. Later, based on the Mk II, the Mk III was developed with the same architecture, but with improved characteristics.

The first combat operation with the participation of the Chariot Mk I started on October 26, 1942 and was named Title. With the help of a fishing boat, two midget submarines were supposed to go to the Norwegian fjords, where the German battleship Tirpitz was located. Before the last stage of the campaign to the target area, both “Chariots” were lowered from the deck into the water and attached under the bottom of the boat. On the route, the boat got into a storm, as a result of which the torpedoes were blown off – the operation had to be stopped. 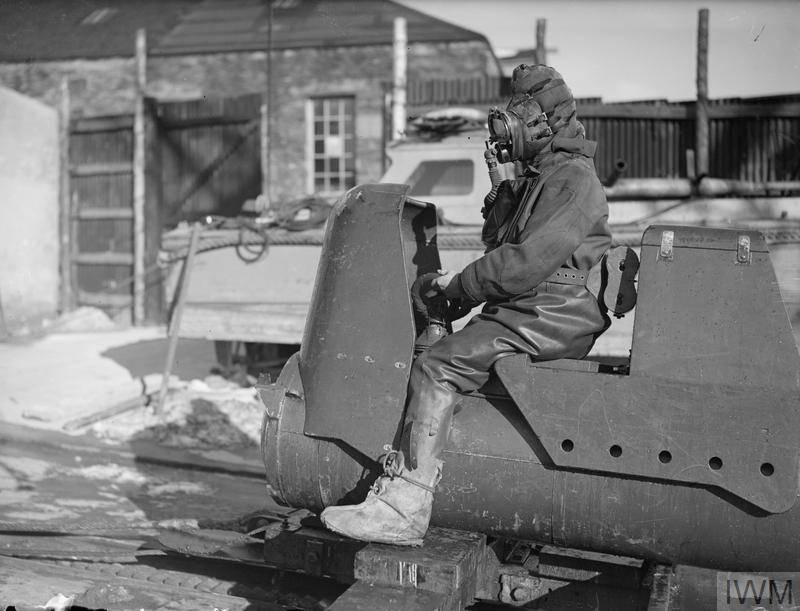 At the end of December, Operation Principal started in Malta, which involved eight human-guided torpedoes, 16 combat swimmers and three carrier submarines. On the way to Palermo, the submarine HMS P-311 was blown up by a mine and sank, after which the attack had to be carried out in a reduced order – the forces of the HMS Thunderbolt and HMS Trooper boats, as well as the torpedoes on them.

Shortly after launching, a battery on a torpedo with tactical number XV exploded, killing the commander. The second swimmer was later captured. On the way to the port, one of the swimmers on torpedo XXIII had a breathing apparatus malfunctioning. The commander left him on the surface and set off on his own to carry out a combat mission. He failed to get to the harbor, after which he returned for a friend. They were soon picked up by a submarine. Another crew tried to go to the shore, but the rudders jammed at the torpedo – it had to be flooded.

Only two torpedoes were able to penetrate the port of Palermo and place the charges. The main ammunition lay under the light cruiser Ulpio Traiano and the Viminale transport. Compact charges have been installed on several other boats and ships. On the way back, the engines of both torpedoes failed, which is why the swimmers had to abandon them and go to the shore on their own.

After an unsuccessful raid on Palermo, only two Chariot products remained in service in Malta. Already on January 18, a new attack was carried out – on the port of Tripoli. The submarine HMS Thunderbolt again delivered the torpedoes to the target point and launched them into the water. On one of the torpedoes, the rudders almost immediately went out of order. The crew had to swim to the shore and hide from the enemy. The second pair of saboteurs hit the port and blew up the Guilio transport. Almost simultaneously with this, the Germans flooded the ships at the entrance to the port, because of which the combat swimmers could not return to the submarine and went ashore. 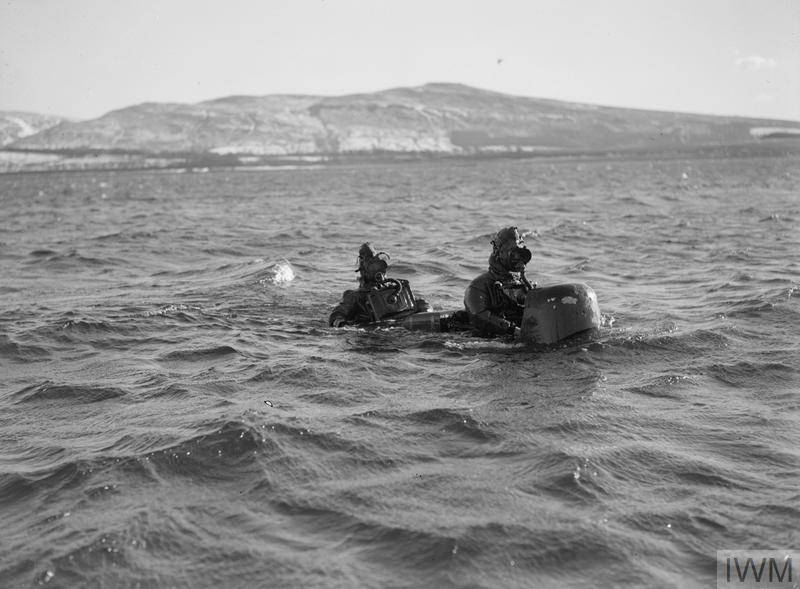 “Chariot” on the surface

In May and June, before the Allied landings in Sicily, human-guided torpedoes were used for reconnaissance. With their help, the swimmers secretly crept up to the given objects and conducted observation. The nature of such operations made it possible to do without losses: even in the most difficult situations, the scouts could return to the carrier submarine.

On June 21, 1944, British saboteurs launched Operation QWZ. It is curious that together with them in this event took part Italian combat swimmers from the 10th flotilla MAC, who went over to the side of the Coalition. The 10th Flotilla provided several boats, and the crews of two man-guided torpedoes participated from the KVMF.

On the same day, saboteurs arrived at the port of La Spezia and launched the Charion into the water. One of the crews was able to mine the cruiser Bolzano, but on the return move, their torpedo ran out of batteries. The second pair of swimmers immediately ran into technical difficulties, but tried to break through to the goal. As a result, both torpedoes were sunk, and the soldiers had to go ashore.

In April 1945, Chariot Mk Is were used for Operation Toast, which aimed to sink the unfinished aircraft carrier Aquila in Genoa. The KVMF provided two torpedoes, the crews for which were recruited from Italians. One of the submarines was unable to reach the port, and the crew of the second failed to hang the charge under the target – it was laid to the bottom. Soon the torpedo returned to the carrier boat, and a few hours later there was an explosion. The ship was damaged, but did not sink.

The process of installing a warhead on a ship

The only fully successful Chariot operation is considered to be a raid on the port of Phuket at the end of October 1944, which used two Chariot Mk II submarines. The submarine HMS Trenchant delivered them to the area of ​​the combat mission, after which they managed to reach the target, mine two transport ships and successfully return to the carrier.

From 1942 to 1945, two modifications of the Chariot human-guided torpedoes were involved in less than a dozen operations. They managed to sink or seriously damage no more than 8-10 ships, ships and boats. At the same time, most of the torpedoes had to be abandoned and flooded at one stage or another of the combat work. In addition, 16 combat swimmers were killed (including on board the HMS P-311) and several people were captured. Such results cannot be called outstanding, and they show, in general, the low combat effectiveness of the Chariots.

Looking at the progress and results of operations, you can see why the British midget submarines showed unsatisfactory results. So, the first failure of the mission was associated with the unsuccessful organization of the raid. The fishing boat turned out to be a poor carrier of human-controlled torpedoes and lost them in the storm. Subsequently, submarines and specialized boats were used – with positive results. 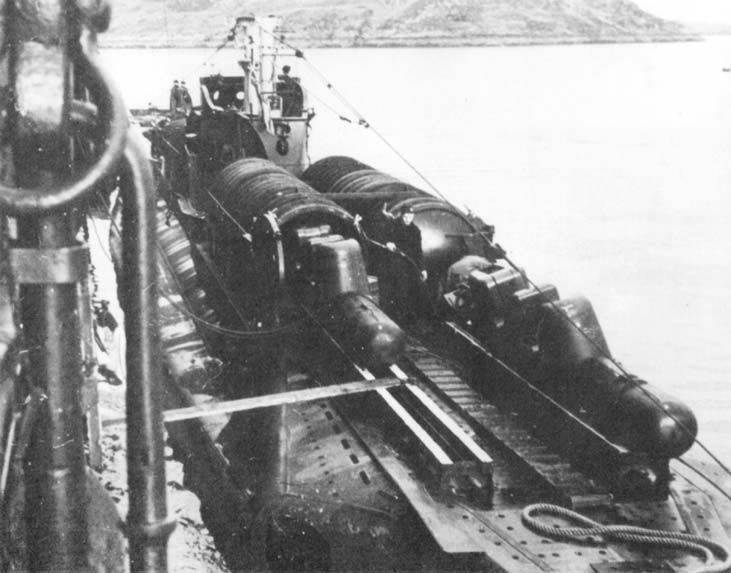 The most common reason for the failure of a task at one stage or another was problems with batteries or motors, up to the most serious ones. The rudders failed several times. At the same time, there were no serious problems with navigation and other devices. The personal equipment of the combat swimmers has generally performed well, with the exception of isolated incidents with breathing apparatus.

It should be noted that in the absence of technical difficulties at the first stages of the operation, the saboteurs had every chance to go through the obstacles, reach the target, install a warhead on it and leave. Not once did the enemy manage to notice human-controlled torpedoes in time and take action.

The Chariot Mk I project in its original form was developed in a hurry and with an eye on the foreign model. This led to known negative consequences: torpedoes required special carriers, did not differ in high tactical and technical characteristics and were not sufficiently reliable. However, the negative influence of these factors was able to be reduced due to competent planning of operations, the correct use of technology, as well as the skill and courage of combat swimmers. In the future, the experience of the not very successful torpedo of the first type was used to create more advanced modifications of the Mk II and Mk III.

As a result, “Chariots” of all types were not the most numerous and widespread technique of the KVMF, but they also managed to make a small contribution to the victory over the enemy. In addition, the experience of their development and operation, positive and negative, became the basis for the further development of special equipment for combat swimmers.