The British Department of Defense announced the development of a promising unmanned aerial vehicle under the working designation i9. This product is a limited size multicopter with its own small arms and advanced controls. Such a UAV will have to expand the combat capabilities of troops when working indoors.

The development of the i9 UAV is carried out by order and under the supervision of the British Strategic Command. The goal of the project is to find and work out solutions for creating a combat drone that can work effectively in confined spaces, both at the operator’s command and independently.

The design itself is carried out by a startup company, the name of which has not been disclosed. The project has a high priority and is being developed behind closed doors. As a result, the Ministry of Defense cannot disclose the developer and publish the appearance of the product. However, the newspaper The Times has already published a photo of a certain hexacopter with a suspension similar to small arms. Whether this product has anything to do with the i9 theme is unknown.

The restrictions did not prevent the military department from disclosing the existence of a new project, the main technical features, goals and objectives, as well as the current stage of work. Despite the lack of the most interesting details, the available data allow us to evaluate the proposed concept and how to implement it.

According to open data …

It is known that the new i9 UAV is a remotely controlled platform with advanced electronic equipment, its own optics and weapons. As i9 develops, it can receive new components and funds, incl. seriously affecting fighting qualities.

The basis of the complex is a helicopter-type drone with six rotors. The diameter of such a machine does not exceed 1 m, other dimensions and weight are unknown. It is argued that with the dimensions obtained, the UAV is capable of operating inside buildings and premises. The carrying system is protected from collisions with surrounding objects.

The UAV should receive a combined control system that allows it to work on commands from a remote operator or independently. In autonomous mode, the i9 must monitor the situation using certain sensors, build an optimal route and find potentially dangerous objects. In particular, the drone will be able to approach the walls – the problem of disruption of air flows and a decrease in the efficiency of propellers has been solved.

On board the i9 there is a video camera, the signal of which is transmitted in real time to the operator’s console. Due to this, the operator can independently monitor the situation and control the flight. In addition, the video system is integrated with “technical vision” and artificial intelligence elements that ensure the detection and tracking of the enemy. Such functions are necessary for the use of weapons.

The armament of the UAV is a pair of smooth-bore rifles of an unnamed type on a stabilized installation with guidance mechanisms. Ammunition, rate of fire, range, etc. have not been specified yet. At the same time, it is indicated that in the future i9 may receive other weapons – automatic shooting systems or even small-sized missiles.

The promising i9 UAV is designed to support soldiers in urban areas and inside buildings. Depending on various factors, the drone will be able to do this work independently or at the operator’s command. The limited dimensions will allow the device to fly through the existing openings and gaps, incl. inaccessible to humans.

With the help of a video camera and sensors, the UAV will be able to provide visual reconnaissance. It is possible that a mapping mode will be provided with a two- or three-dimensional model of the premises. The presence of such functions will greatly simplify the solution of a combat mission – already at the stage of preparation for a battle, maximum information will be obtained.

Artificial intelligence and technical vision will have to identify the enemy’s manpower and report it to the operator. Despite the maximum autonomy, the i9 product will not be able to use weapons on its own – the decision to open fire will remain with the operator. In this case, the process of target tracking, weapon guidance and firing will be automated, and only a permit for use will be required from a person.

Having your own weapon will allow the drone to participate in the assault on various premises. He will be able to independently search for the enemy and, having received permission, hit him. As a result, the assault and clearing of the premises by the forces of soldiers will be easier and with less risks.

The possibility of fighting other targets is mentioned. In particular, the i9 will be able to attack other UAVs of comparable size. For this, standard small arms or a ram can be used. It is assumed that in terms of the effectiveness of the fight against drones, the i9 complex will surpass fighters with standard weapons.

The proposed concept of a reconnaissance and combat UAV for indoor operations is of great interest to the army, but its implementation is highly complex. To develop a complex of the type i9, it is required to solve several rather complex problems of various kinds. Apparently, this is what Strategic Command and an unnamed startup are doing right now. 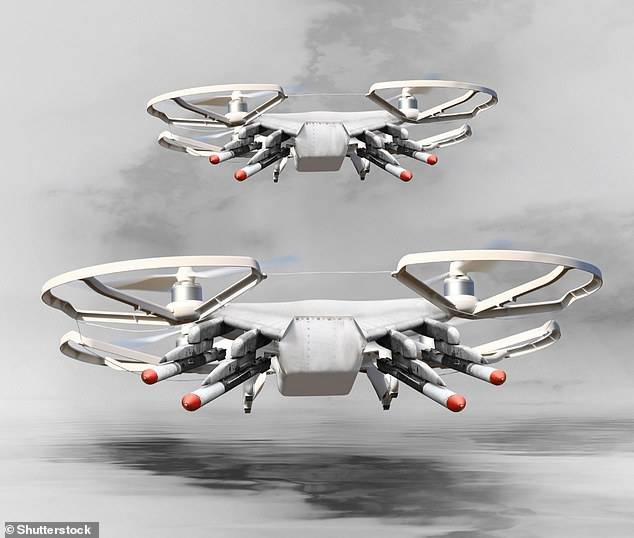 The least difficult task is the development of a hexacopter platform with the ability to suspend the required electronic equipment and a twin gun mount or other weapons. All the necessary technologies and component base are available, however, specific loads may place special requirements on the aircraft.

Of particular difficulty is the creation of artificial intelligence control systems capable of performing all assigned tasks. For the i9 complex, it is necessary to develop optical and other technical vision devices capable of quickly and reliably identifying dangerous objects, primarily armed people. At the same time, reliable fire control loops and communication means are required to ensure stable operation in buildings or premises.

Thus, the i9 project faces several difficult tasks, the solution of which can take a lot of time, effort and money. Moreover, their solution is a prerequisite. So, without controls and automation that fully meet the requirements, an unmanned complex will not be able to show its characteristic advantages.

The result of the current work will be the emergence of both a new i9 complex and a set of technologies suitable for the development of new similar systems. Thus, in the distant future, British engineers can create a whole family of reconnaissance and combat autonomous UAVs with different capabilities and characteristics.

According to the published data, the i9 project has already reached the test of an experienced drone, but it still needs further refinement. Details of the tests were not reported. It is not known how soon they will be completed and what their results will be. Perhaps the British Ministry of Defense will continue to publish various news on the progress of work from time to time, and then will show a ready-made sample suitable for adoption.

How the current work on the i9 UAV will end is a big question. Moreover, the very fact of such a project emerging shows an interesting tendency. The armies are interested in obtaining fundamentally new drones with maximum autonomy, and the development of technologies already allows them to be created. With a favorable development of events, the British i9 is quite capable of becoming at least one of the first reconnaissance and combat UAVs with artificial intelligence. And it is already clear that he will not be the last in this class.