It is possible that intelligence delivered information on foreign tanks in this form. The photo shows one of the variants of the Renault ZM Source: warspot.ru

Soviet Russia in the 1930s was just embarking on the path of industrialization, experienced a shortage of both material and highly qualified labor resources. However, the understanding that everyone around is building up their military potential forced us to develop our own military equipment in all possible ways and in spite of everything. Domestic intelligence played one of the most important roles in this.

The planning and control body providing communication between military-technical intelligence and the military-industrial complex was the Military Technical Bureau under the Defense Committee, subordinate to the Soviet government. At various times, the bureau and department included Voroshilov, Molotov, Tukhachevsky, Ordzhonikidze, Yezhov and, of course, Stalin. Later, in 1939, this body received a long name: the Department of Research and the Use of Foreign Technology under the Defense Committee under the Council of People’s Commissars. The staff of the department consisted of 21 people, the selection of each of them was handled by the Central Committee of the CPSU (b). Molotov’s memorandum to Malenkov dated June 28, 1938, in which he asks

.
One of these was engineer Sergei Vasilievich Petrenko-Lunev, who graduated from the electrical engineering department of the Higher Technical School in Karlsruhe and the Military Academy. Petrenko-Lunev spoke Hungarian, Italian, German, Romanian and French, and worked at one time as an attaché in the embassies of the Soviet Union in Germany and Italy.

The engineer remained in the position of secretary of the bureau until May 1937, after which he was arrested, accused of espionage and shot. 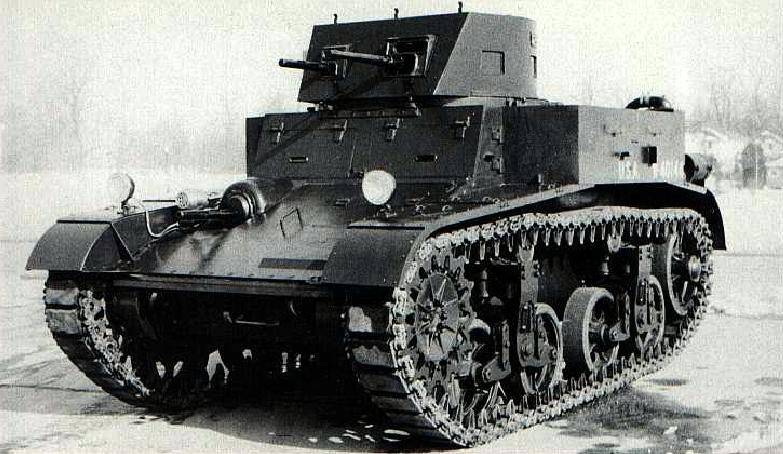 Combat Car M1 was also in the field of interests of Soviet intelligence. Source: ru.wikipedia.org

Interestingly, in professional slang, military-technical intelligence, even in internal correspondence, was referred to as a “mining authority” and was far from always characterized from a positive side. So, in September 1938, the secretariat “complains” about the scouts:

“… there is a decline in the quality of the work of our extractive bodies: materials continue to arrive, but not in the order of the implementation of the tasks of the Military-Technical Bureau.”

That is, agents abroad worked, but not always according to the given programs and with a general decrease in efficiency. In 1937, out of 16 tasks, intelligence did not cope with 7, and the next year 23 orders out of 28 did not work. Statistics were kept on the amount of materials transferred from intelligence to industry: in 1937 – 518, and in 1938 – only 384. The people’s commissariats also conducted their own assessment of the value of the data provided: in 1936, 48% of the data were useful, 29% were not of interest (the rest, apparently, was something average in importance), in 1937 this ratio was 38% / 32 %, a year later everything worsened: 17% and 55%, respectively. Two reasons are clearly visible: first, typical Soviet planning without taking into account many factors, and secondly, echoes of the repressions of the late 30s.

As a result, the following tough resolution of the Bureau Secretariat appeared:

“The extractive bodies of the NKVD, transferring a large amount of valuable material to the industry, basically do not comply with the decisions of the Military Technical Bureau (VTB), which fix the most pressing issues for our industry … From year to year, the amount of valuable materials coming from the extractive bodies of the NKVD falls … Every year, about … percent of materials that have no value come in, which only clog up our design bureaus and laboratories, distracting them from more important work …
Suggest to the NKVD … Shift your attention to the execution of VTB tasks first of all … Pay attention to the quality side of the transferred material … To focus the attention of the mining authorities on the acquisition of materials, first of all, on the following branches of the military industry: aviation, navy, artillery, gunpowder. “

Despite such criticism, the efficiency of the “extractive bodies” in some cases was amazing.

Here we will allow ourselves to deviate a little from the central theme of tank building and reveal the story of the development of the production of domestic plexiglass – artificial glass. On May 8, 1936, “material on the production of artificial glass“ Plexiglas ”” was laid on Molotov’s desk from intelligence. Already on May 9, this report was sent to the People’s Commissar of Heavy Industry Ordzhonikidze, and after all the approvals on August 9 of the same year, the Plastics Institute and the Soyuzkhimplastmass trust received an urgent task to develop a pilot shop for plexiglass. The deadline was unprecedented – on February 1, 1937, it was required to launch the workshop. It should be noted that earlier the Soviet Union wanted to buy artificial glass production technology from the Germans, but the price turned out to be exorbitant – about 2.5 million marks. As a result, they managed with the forces of military-technical intelligence and the costs of completely different amounts.

On May 14, 1938, at a meeting in a special technical group under the People’s Commissar of the Defense Industry, it was stated:

“The area of ​​application of plexiglass is extremely huge for the defense of the country: 1) the aircraft industry; 2) marine equipment (wheelhouses, portholes); 3) tank building; 4) flight goggles and gas masks; 5) colored signal signs on airplanes; 6) instrumentation … It is necessary to immediately start designing a new plant. “

And already on September 21, 1938, the head of the special technical group informed VTB:

“In August 1938, the K-4 plant was commissioned and mastered the design capacity of 100 tons of glass / year.”

The report of the People’s Commissariat of Medium Machine Building for 1939 speaks very well of how urgently information about the latest foreign tanks was needed. In it, the leadership of the People’s Commissariat insists on obtaining drawings of general views (with sections) and units of tanks, more complete coverage of super-heavy tanks, designs of their observation devices, devices for underwater navigation, data on passive and active means of anti-tank defense, information on the experience of using tanks during German attacks on Poland and on the western front. All intelligence information, the report explains, must go to the industry immediately after it appears in the country. The Soviet Union was actively preparing for the engine war, and any news from abroad was important.

In the interests of medium-sized mechanical engineering

Let us consider in more detail what valuable materials were supplied to the homeland by the “extractive organs” of the NKVD for tankers.

Of particular importance were contacts with Great Britain, from which they even managed to quite officially buy out several samples of armored vehicles. But the intelligence of the USSR also delivered a lot of interesting information through illegal channels. Vladimir Vasiliev, Candidate of Historical Sciences, in a series of articles in the Military-Historical Journal, says that the British managed to obtain secret information about advanced technologies for the production of armor. Vikkers was then working on cemented chromium-nickel-molybdenum armor, the nuances of which hit the table of both the leadership of Soviet intelligence and tank engineers. Not only secret documents were obtained, but also completely finished samples – in 1938, a piece of Hadfield’s 5-mm armor, 820 by 530 mm in size, was transported to the USSR. Chemical analysis provided a fairly complete picture of the composition of the British billet, but the technical capabilities of production did not allow at that time to organize the smelting of such steel. Only in 1941, the T-50 tank first appeared on track links made of Hadfield alloy.

The French tank industry, despite the secrecy regime, reluctantly shared with Soviet engineers the tactical and technical characteristics and photo illustrations of Renault ZM and VM light tanks, as well as the floating Laurent. The documents were at the disposal of the tank builders in April 1937. It cannot be said that there were some direct borrowings from the Soviet side, but non-standard French solutions aroused considerable interest: the transmission on the left side (Renault VM), rubber blocks as amortization of the road wheels, as well as the cast body of the Renault ZM. Previously obtained data on the French medium tank B1, Renault C2 and VO were also studied. Moreover, there is evidence that at the Mariupol Machine-Building and Izhora Metallurgical Plants, samples of the armor of the hull and turret of the Renault VM tank were tested. As with Hadfield’s steel, intelligence from France provided industry with more than documents and photographs. 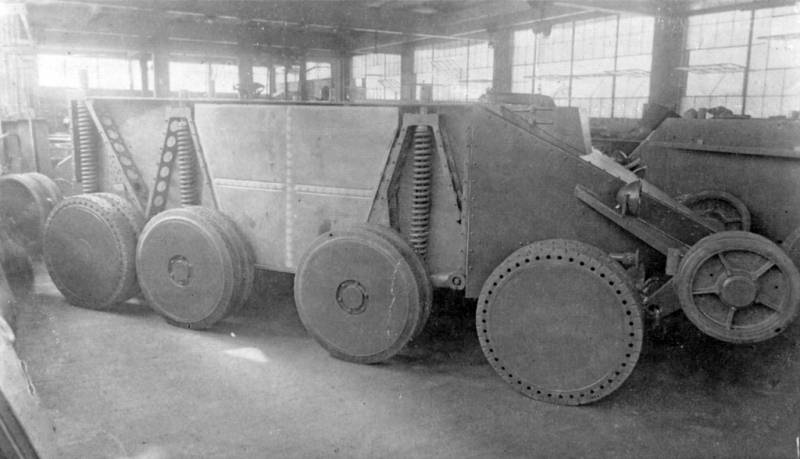 Soviet military-technical intelligence had a lot in common with the American side as one of the leading tank-building powers at one time. First of all, a special interest in Walter Christie’s high-speed cars. This was not always helpful. So, since the end of 1935, news has been coming from the United States about the development of a tank suspended under the fuselage of an aircraft, and also capable of moving on a combined wheeled-caterpillar track. The chief of intelligence of the Red Army, Semyon Uritsky, writes about this to Kliment Voroshilov:

“I have received a telegram from our American resident concerning the famous tank designer Christie, with whom negotiations are underway to build and purchase his tank for suspension to aircraft … According to available data, Christie has no ready-made tanks, but only starts assembling a suspended tank.”

Materials on the M.1933 car were transferred to the Kharkov steam locomotive plant, but they did not find a serious continuation. In the Soviet Union, and without ideas Christie conducted experiments on “flying tanks”, hanging armored vehicles under the fuselage of the TB-3. In addition to data on Christie vehicles, tank builders received blueprints for the M2A1, M2A2 and Combat Car M1 tanks adopted in the United States. In particular, special interest was aroused by rubber-metal tracks, the materials for which were highly recommended to rethink and organize production. In addition, the portfolio of the illegal residency included information on the parabolic reflectors of tank headlights and the design of the radio station’s whip antenna – this intelligence formed the basis for similar domestic developments.

As you know, the American legacy did not in the best way affect some of the design features of the best tank of the Second World War – the T-34. In particular, the Christie-style tank suspension can be considered an atavism. Here, Soviet intelligence could change the situation. Before the war, the People’s Commissar for Defense Tymoshenko was reported on the results of testing the German T-III, as a result of which he proposed replacing the complex and bulky T-34 suspension with a torsion bar. But it didn’t work out. However, this is a slightly different story.