“Patriotic Spaniards Attack French Bandits.” With such drawings in the years of the Napoleonic wars, the publishers tried to raise the morale of the people. On the banner in the distance is the inscription: “Long live King Ferdinand!” In the battle, as you can see, everyone is involved. Foreground shows effective bayonet operation.

Turned the muzzle
In the blue cold of bayonets
And the star looked at us
From behind the smoky clouds.
(In intelligence. M. Svetlov)

The history of weapons. It was not expected at all, although there were thoughts about it that it would be necessary to write so soon not only about firearms, but also about bayonets. I must say that materials about them have already appeared on VO. One not so long ago, but too short. And as many as four, devoted to an interesting question, why the Russian “three-line” was fired at with a bayonet.

However, insultingly little was said about the bayonets themselves.

Although, of course, there is, say, a book about them published by Atlant Publishing House “Bayonets of the World” (AN Kulinsky, VV Voronov, DV Voronov). But here it is already different – there is a book, but the topic is too narrow, although there is no doubt – an interesting one. This means that it is necessary to write about the bayonets in sufficient detail, but in such a way that this unnecessary knowledge does not burden anyone. Well, and, again, give a good “visual range”, so that there would also be something to see!

Well, after that – we proceed to the presentation of the “history of the bayonets.”

The term “bayonet” itself, which was originally called “bayonet”, dates back to the second half of the 16th century. Although it is unclear if the bayonets at the time were special knives that could be attached to the barrels of firearms, or if it was just a variation of them.

For example, in Cotgrave’s Dictionary of 1611, the bayonet is described as

“A kind of small flat pocket dagger fitted with a scabbard, or a large knife that can be hung on a belt.”

Similarly, Pierre Borel wrote in 1655 that

in Bayonne a kind of long knife called “bayonet” was made,

but does not provide any further description of it. 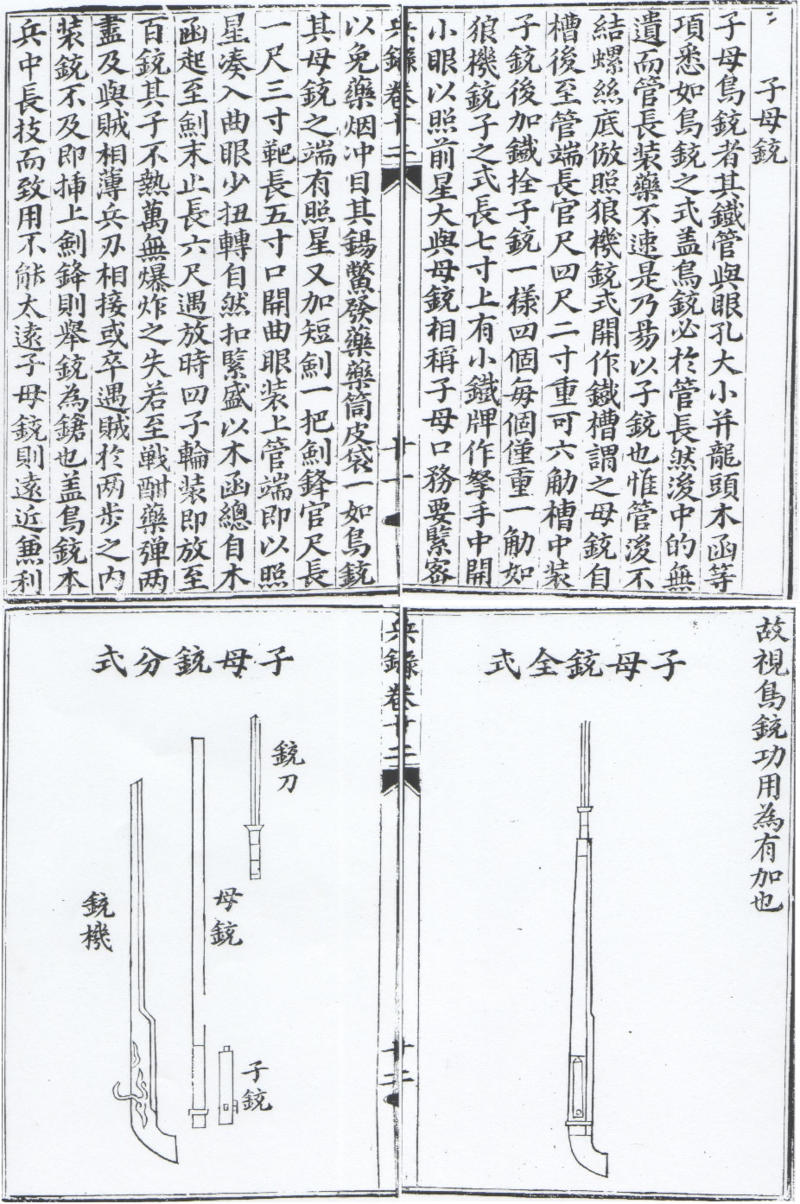 Interestingly, the first, so to speak, registered sample of the bayonet itself was found in the Chinese military treatise Binglu, published back in 1606. It was a musket, into the barrel of which a 57.6 cm blade was inserted, which ultimately gave a total length of 1.92 m.

In Chinese characters, this weapon was referred to as “blade gun” (Traditional Chinese: 銃 刀; Simplified Chinese: 铳 刀), and the bayonet to it was described as

“A short sword that can be inserted into the barrel and secured by slightly twisting it”,

and what to use it should

“When gunpowder and bullets run out in battle, as well as in a battle with bandits, in hand-to-hand combat or when they are ambushed”,

if a warrior “cannot load a gun in the time required to traverse two bu (3.2 meters) of ground, then he must insert a blade into the barrel and hold the gun like a spear.”

That is, here, too, we must give the Chinese the palm in the invention of the bayonet as a weapon of war.

But … was it really so? We certainly don’t know for sure.

But we know for sure that the first bayonets in Europe were the so-called “plug bayonets” – bayonet bayonets inserted with handles into the barrel.

The first known mention of the use of such bayonets in European war we find in the memoirs of Jacques de Chasten, Viscount de Puisegur.

He wrote that the French used rough 30 cm bayonets during the Thirty Years’ War (1618-1648). However, it was not until 1671 that General Jean Martinet armed a regiment of French fusiliers with “plug bayonets”. They were also issued to the soldiers of the English Dragoon Regiment, formed in 1672, and the Royal Fusiliers Regiment in 1685. 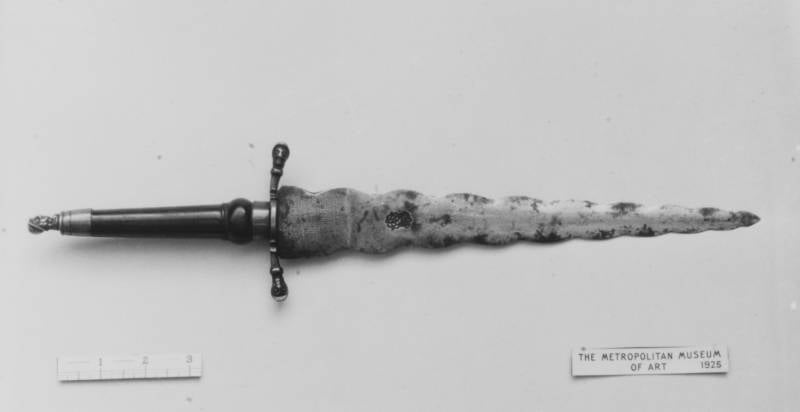 English bayonet 1685-1688 Length 41.9 cm. Weight 238.1 g. Pay attention to his blade: “shine, water, snake” – subconscious “idols of the cave” that increase the fear of a person in front of a wavy blade. Metropolitan Museum. New York

The disadvantage of such a bayonet was obvious. Having inserted it into the barrel, it was no longer possible to shoot from the gun. The defeat of government forces at the Battle of Killikrank in 1689 was, by the way, associated (among other reasons) with the use of a bayonet bayonet.

Then the Highlanders Jacobites, supporters of the exiled king James VII of Scots (James II of England), took up positions opposite the government army on the hillside. They approached the soldiers 50 meters, fired a volley, then threw their muskets and, using axes and swords, crushed the loyalist troops before they had time to attach their bayonets to them.

After that, their defeated commander Hugh McKay presented a version of the bayonet of his own invention. His blade was attached to a tube that was put on the barrel of the musket, and was at a certain distance from it, which made it possible to shoot and reload the musket, even with a bayonet attached to it.

Bayonets, and unsuccessfully, were also used in the Battle of Fleurus in 1690 in the presence of King Louis XIV, who refused to accept them into service with his army, as he noticed that they fell out of the barrels.

Soon after the Riswick Peace (1697), the British and Germans stopped using the pike, and introduced bayonet bayonets. A British bayonet of this type had a wide triangular blade with two cross hairs. But he did not have a lock to fix the bayonet handle in the barrel, and it was documented that such bayonets were often lost by soldiers in the heat of battle. Therefore, they were in service for a few years.

Already in 1700, bayonets with a split bushing and an L-shaped groove appeared in England, which made it possible to firmly fix them on the barrel. Interestingly, the bushing itself was cut lengthwise so that it could be easily adjusted to the diameter of any barrel if necessary. The blade itself was still flat and rather wide, and even with a shell-shaped guard in the place where it was attached to the sleeve.

However, the use of new samples, which made it possible to both stab and shoot at the same time, nevertheless went slowly. So, in 1703, the French infantry adopted a spring-loaded locking system for the handle, which prevented accidental separation of the bayonet from the musket. In particular, the device with a spring-loaded plate on the handle had a Swedish bayonet bayonet, model 1692.

Only around 1715, a thrusting trihedral blade appeared on the continent on the curved neck of a bayonet retracted from the barrel, which immediately proved to be very effective.

But in England in 1720 a triangular socketed bayonet was adopted to the Brown Bess musket, which served unchanged until 1840. The bayonet was carried in a hard leather sheath with brass details and was attached to the gun on command.

For some time, all the efforts of the inventors were devoted to improving the design of the sleeve for attaching the bayonet to the barrel.

The first type – a slotted sleeve with an L-shaped slot has already been mentioned here.

It turned out that the slot weakens the bushing, because of which it looses and does not provide a strong connection with the barrel. Therefore, a simplified bushing appeared, used with Brown Bess muskets with one L-shaped slot. 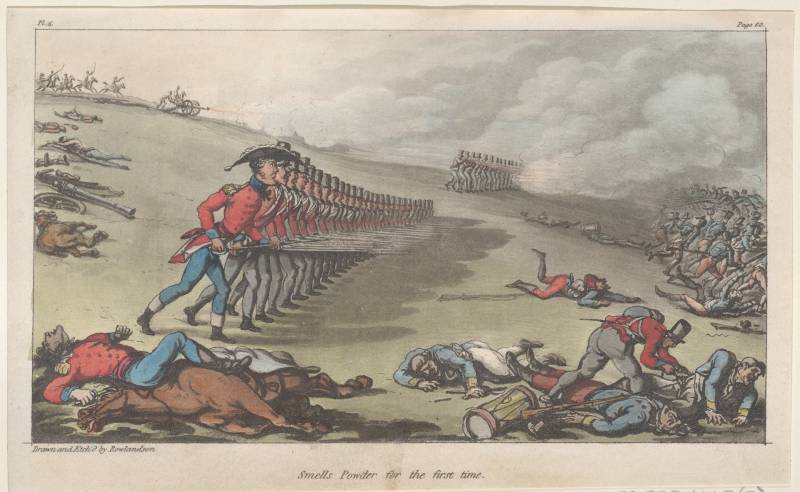 “Smells of Gunpowder for the First Time” from The War Adventures of Johnny Newcome, 1815 Thomas Rowlandson. The tactics of the British infantry of the period of the Napoleonic wars are very clearly shown. Metropolitan Museum. New York

In 1696, Sweden came up with the idea of ​​fastening a bayonet with a clamping screw, but the need to cut screws and threads for them did not cause mass imitation. 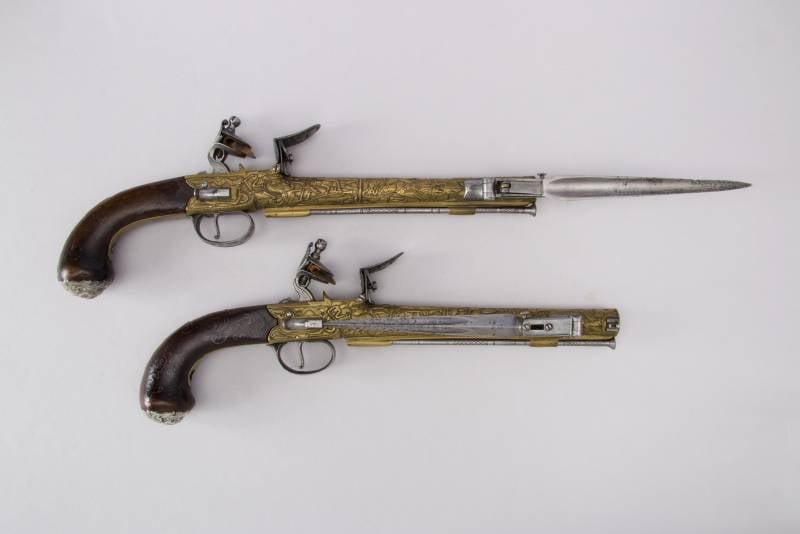 The British army in India, serving the interests of the East India Company, received bayonets with a leaf spring-latch that overlapped part of the L-shaped slot. Only by lifting it, it was possible to pass the pin on the barrel inside it, which made the bayonet completely unremovable. However, such a device took a little longer to put the bayonet on the barrel. 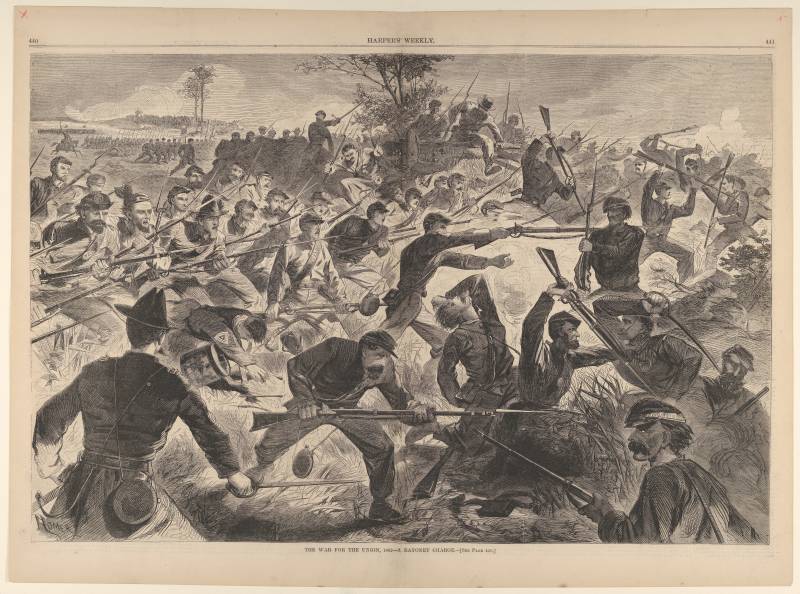 In the summer of 1862, the Army of the Potomac attacked Richmond, Virginia, but was repulsed. This dramatic event was portrayed by Homer Winslow, an artist for Harper’s Weekly, who described the fighting in Fair Oaks on May 31, when Union forces were rescued by last-minute reinforcements. We see Southerner and Northerner soldiers in hand-to-hand combat, taken to the extreme.

“Soldiers rarely cross bayonets with each other in battle. Before the attacking regiment reaches its enemy, the latter usually flees. All the strength and all the courage of the world will not protect a person from being hit with a bayonet on the body if he stops while he is approaching him …

In Fayroax, the rebels almost always broke and fled before our bayonets reached them. However, in one or two cases hand-to-hand fights took place “…

One of them is shown in our picture above.

In Denmark, in 1794, a locking plate (spring) with a square hole for a pin was proposed and then used for 50 years. Removing the bayonet with such a “lock” on the coupling was possible only by lifting it by the special “wings”.

For some reason, the Austrians made the groove on the clutch oblique and, following the French, introduced a rotating ring locking it on it. But in Hanover, a thickened rim was made on the bushing, and a spring in the form of a hook was fixed on the barrel itself. And now it was possible to remove the bayonet from the Hanoverian rifle only by bending it back. This invention was called the “Hanover latch”.

In 1873, the Americans for their bayonet-shovel came up with, firstly, a very large sleeve, which served as a “shovel” handle, and secondly, made it a composite of two halves. First, it was put on the front sight with a slot, and then the rear half of the sleeve turned and tightly locked the slot.

Already during the Second World War, the British, on their No. 4 bayonet for the Enfield rifle, used the bushing fastening between the “ears” of the front sight guard. But such a bayonet could only be put on this rifle.

It is interesting that in England in 1840, a special bayonet for policemen also appeared, which differed from army bayonets only by the presence of a special spring latch near the bayonet neck itself. It was invented so that the bayonet could not be snatched out of its scabbard by any outsider. After all, a policeman is not a soldier. He could very well find himself in a crowd of prisoners or revolting citizens who might try to take possession of his weapon.

But the cunning latch did not leave them the slightest chance to arm themselves in this way for their malicious purposes.