In the name of de Gaulle

France is armed with one aircraft carrier (not counting the universal amphibious assault ships). The displacement of the aircraft carrier Charles de Gaulle is 42,000 tons, which is significantly more than that of the Italian Giuseppe Garibaldi and Cavour. Up to 40 aircraft can be based on board the ship. The backbone of its air group is the Dassault Rafale fighter. The aircraft is interesting, significant for Europe, and as a whole represents at the moment the pinnacle of development of fourth generation fighters (similar in spirit to the Eurofighter Typhoon, but unlike it, modern radars with an active phased antenna array are just beginning to receive). 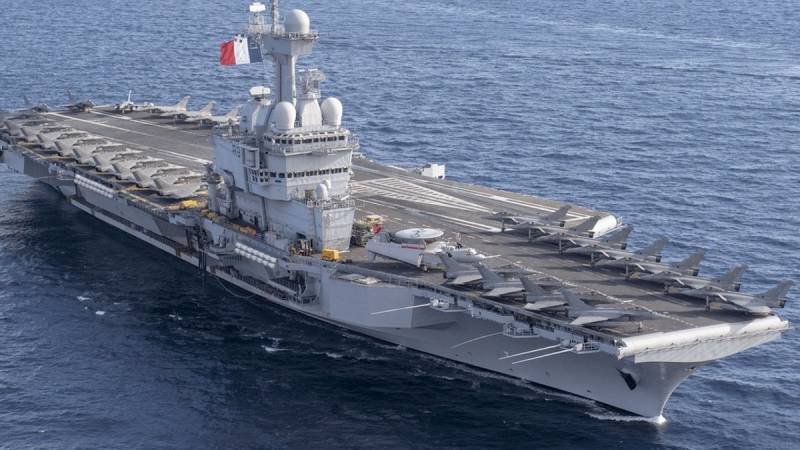 Charles de Gaulle, noted in the Syrian campaign, is far from old. It was commissioned in 2001. For comparison, “Admiral Kuznetsov” was commissioned in 1991. At the same time, according to the latest data from a source in shipbuilding announced by TASS, there is no talk of writing off. Moreover, in 2022, the upgraded ship should go to sea trials …

At the same time, the French understand that Charles de Gaulle will not last forever. They talked about replacing it before, only this was done as lengthy assumptions.

Now the leadership of the Fifth Republic has taken the matter seriously. According to the blog of the Center for Analysis of Strategies and Technologies, during his recent speech at the head enterprise of the French nuclear industrial corporation Framatome in the city of Le Creusot, Emmanuel Macron spoke about the start of the practical implementation of the Porte Avion Nouvelle Generation (PANG) program, which involves the development and construction of a promising aircraft carrier for French Navy. The ship will receive a nuclear power plant. 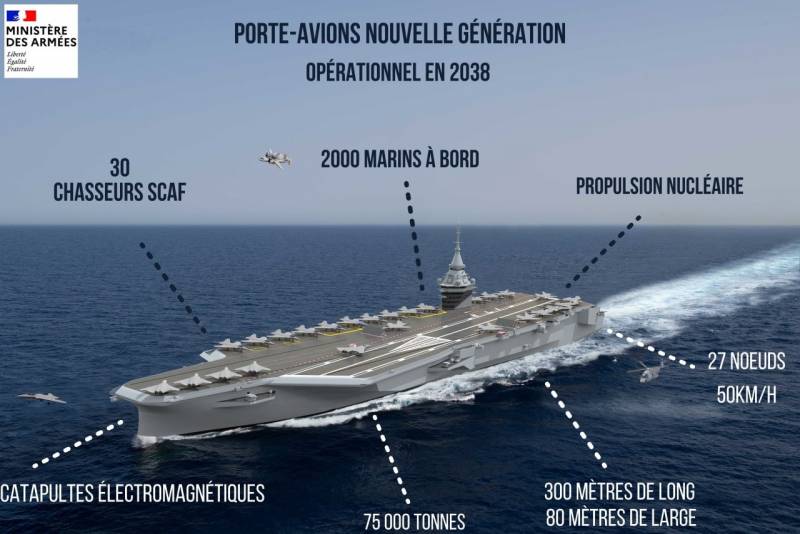 As you know, Charles de Gaulle will complete his service in 2038. That is why I decided that the future aircraft carrier with which our country and our fleet will be armed will be nuclear, like Charles de Gaulle. Your plant in Le Creusot, which throughout its long history has produced the equipment needed for our fleet, will produce, among other things, several major parts of the future aircraft carrier’s nuclear reactor, forging and processing them right here. With this choice, we reaffirm France’s desire to maintain its strategic independence.

The images shown give a general idea of ​​how the ship is seen. It is immediately clear that France does not want to build “Charles de Gaulle number two”. As, however, and the conventional analogue of the new British aircraft carrier of the Queen Elizabeth type: deprived, as you know, of a starting catapult. And it uses F-35B fighters with a short takeoff and vertical landing as the basis of an air wing: with a rather limited (against the background of a full-fledged F-35C) combat radius. 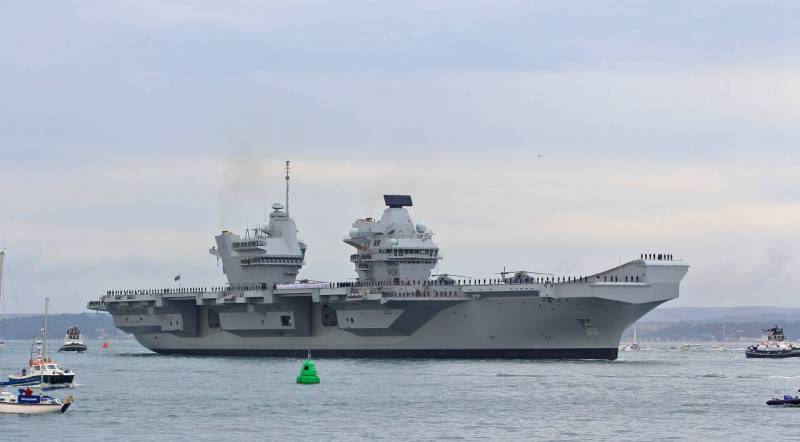 In contrast to the “British”, the French ship should receive three EMALS-type electromagnetic launch catapults and AAG aerofinishers: everything is like on the newest American aircraft carrier Gerald Ford. True, Porte Avion Nouvelle Generation, or PANG (the name of the program for which the ship is created) will still be smaller than the overseas counterpart. If the displacement (full) of the latter is 100 thousand tons, then the aircraft carrier of the French Navy will have 75 thousand tons, which, however, is much more than that of the current French aircraft carrier.

It is assumed that the length of the spacecraft created under the PANG program will be 300 meters, and the width – 30. The power plant should be based on two nuclear reactors of the K22 type, with a thermal power of 220 MW each. The full speed of the aircraft carrier will be approximately 27 knots. The crew will include two thousand people. 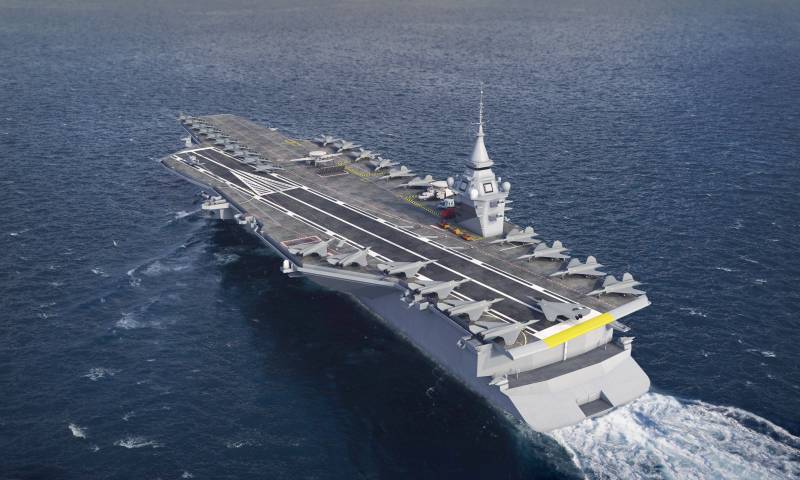 As for the air group, its basis, as one might assume, will be a new generation fighter (most often this machine is considered a representative of the sixth generation), created as part of the Future Combat Air System program. If you believe the layout presented at Le Bourget 2019 (which, obviously, represents only the general vision of the aircraft manufacturers of the current situation), this is a rather large optionally manned vehicle that will be able to carry a very wide range of weapons and will receive unmanned wingmen. 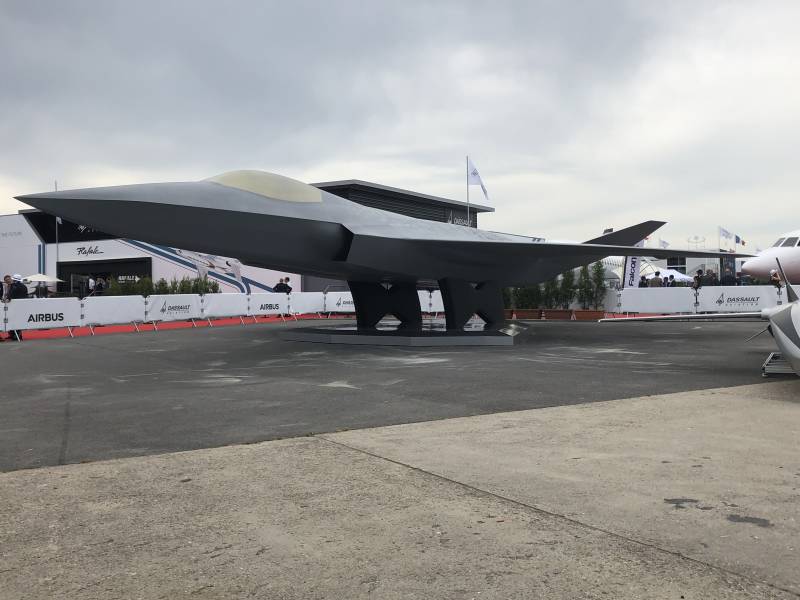 In total, about 30 such vehicles will be able to be based on board the promising ship. In addition to fighters, the aircraft carrier will be able to carry several Northrop Grumman E-2D Advanced Hawkeye early warning and control aircraft, helicopters and UAVs. They will be used with the help of two large lifts. They want to put the ship into operation in 2038.

Of course, the rearmament of the fleet is an important and necessary matter. Moreover, France sees itself as a possible political leader of the EU. However, do not forget about the other side of the issue. Presidential elections are scheduled for 2022 in the Fifth Republic. And faced with serious and often unsolvable challenges, Emmanuel Macron is doing his best to make himself known.

Could the PANG program get started without Macron and his thesis on the need for European defense sovereignty? Maybe. However, you need to understand that the construction of large ships is objectively not the main concern of modern France. In this regard, the most remarkable story of all is the story of the new nuclear submarine for the country’s Navy Suffren – the lead ship of the Barracuda class. It was laid down in 2007 and handed over to the Navy only in November 2020. With the second ship of the series laid down in 2009, the story is roughly similar. 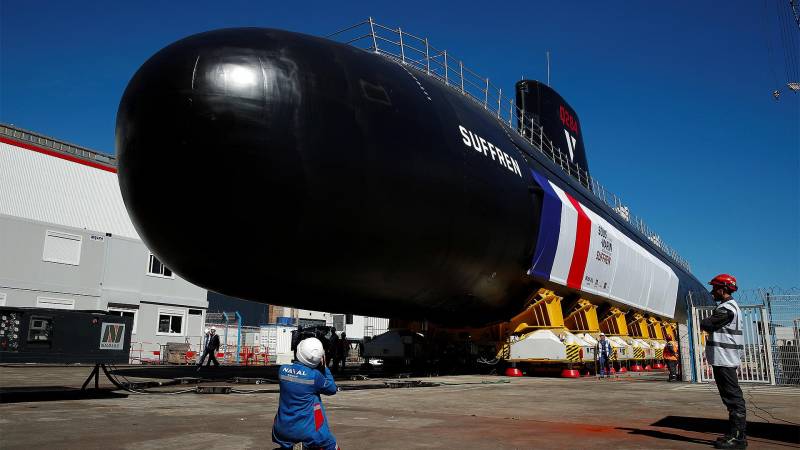 Even against the background of the Russian shipbuilding industry, which is experiencing very great difficulties, such a pace is, as they say, “into any gate”. The Fifth Republic is doing better with the construction of surface ships: the Naval Group, we recall, recently launched the last FREMM-class frigate intended for the French Navy. This is the tenth FREMM frigate built by the Naval Group and the ninth for the French Navy.

However, you need to understand that the construction of frigates is one thing, and the construction of a large nuclear aircraft carrier of a completely new type is another. The goals and objectives for which, by the way, have yet to be determined: so far, the potential of the aircraft carrier looks completely redundant. Perhaps the French will eventually decide to go the other way, more rational. Having built more than one aircraft carrier, but with a smaller displacement. So that one of the ships is always in service, while the other will be undergoing repairs and upgrades. 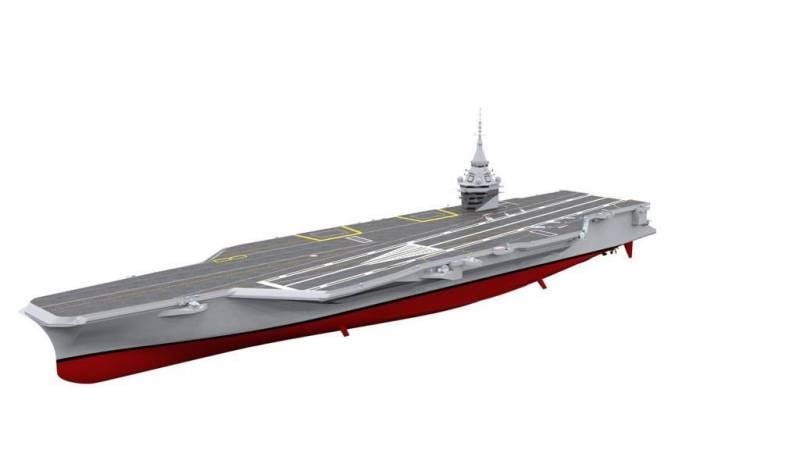 Another interesting idea last year was put forward by the chairman of the Christian Democratic Union (CDU) of Germany, Annegret Kramp-Karrenbauer, proposing to create a pan-European aircraft carrier. Now it looks more like a joke, but over time, the initiative may seem quite reasonable. At least such a program would have a symbolic character, which cannot be said about PANG. A “purely” French aircraft carrier can only become a symbol of excessive (for one country) spending, constant postponements and unfulfilled illusions about the revival of its former greatness.