“Jagdtiger”, a render from the game War Thunder

“Jagdtiger” became the culmination of the development of the class of tank destroyers in Nazi Germany.

A large, hulking vehicle, created on the basis of the Tiger II heavy tank, had a large, well-armored wheelhouse, in which it was possible to place a large-caliber gun. As in the case of the heavy Tiger tanks, the German designers turned their attention to anti-aircraft artillery, focusing on the 128-mm FlaK 40 anti-aircraft gun.

The resulting combat vehicle was practically invulnerable in a frontal duel with all tanks of the allies. At the same time, the “Jagdtiger” itself could easily hit enemy tanks from very long distances, thanks to the monstrous power and armor penetration of its 128-mm gun with a barrel length of 55 calibers. However, this opportunity had to pay with the huge combat mass of the vehicle – more than 70 tons. The weight negatively affected the running gear and mobility of the Jagdtigr, which evil tongues call not a tank destroyer, but a mobile bunker.

The Jagdtiger tank destroyer was developed in Germany between 1942 and 1944. on the chassis of a heavy tank “King Tiger” or (as it is also called) “Tiger II”. The main purpose of the self-propelled gun was the fight against allied armored vehicles. On the one hand, it was an attempt to create a miracle weapon. On the other hand, it is a promising anti-tank weapon capable of effectively holding back armada of enemy tanks during retreat.

Throughout the second half of the war, the Germans were balancing between the creation of rather interesting units of armored vehicles and projects of extremely dubious value and labor costs. “Jagdtiger” was somewhere in between these two extremes.

A feature of the self-propelled gun was originally supposed to be a weapon that would not leave a chance to any tank of the allies. And the German designers coped with this task. As with the Tiger heavy tanks, the designers turned to existing anti-aircraft guns, raising the stakes. As a basis, a 128-mm FlaK 40 anti-aircraft gun was chosen, converted into a PaK 44 L / 55 anti-tank gun with a barrel length of 55 calibers. The self-propelled version received the StuK 44 index. 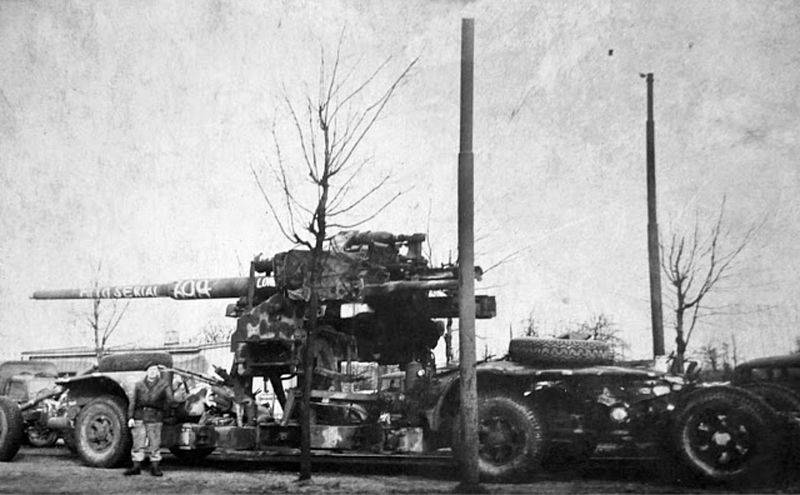 The 28-kilogram armor-piercing projectile of this gun pierced the frontal armor of all Allied tanks and did not lose its relevance until 1948. At least, it is precisely such assessments that appear today among a number of specialists.

An armor-piercing projectile of this gun with a ballistic cap, even at a distance of two kilometers, penetrated 190 mm of armor at an encounter angle of 30 degrees from the normal. The first tank to withstand shelling from it was the IS-7.

For the most massive American tank of World War II, the Sherman, this weapon did not leave any chances. American tanks were hit at a distance of 2.5 to 3.5 kilometers. And here it was not so much the armor penetration of the 128-mm projectile that played a role, but the very possibility of making a direct shot at such a distance. This shell did not leave any chances for the heavy Soviet tank IS-2.

The rifled 128-mm gun was rather bulky and had a large mass. For this reason, the designers did not implement the most common design, abandoning the classic gun mount for anti-tank self-propelled guns. The 128-mm cannon was installed inside the wheelhouse on a special pedestal, which was placed on the floor of the fighting compartment.

The gun possessed great power and high recoil, which negatively affected the Jagdtiger’s chassis, which was already a weak point of the vehicle. For this reason, the shooting was carried out mainly from the spot. The gun’s ammunition consisted of 38-40 shells, both armor-piercing and high-explosive fragmentation. 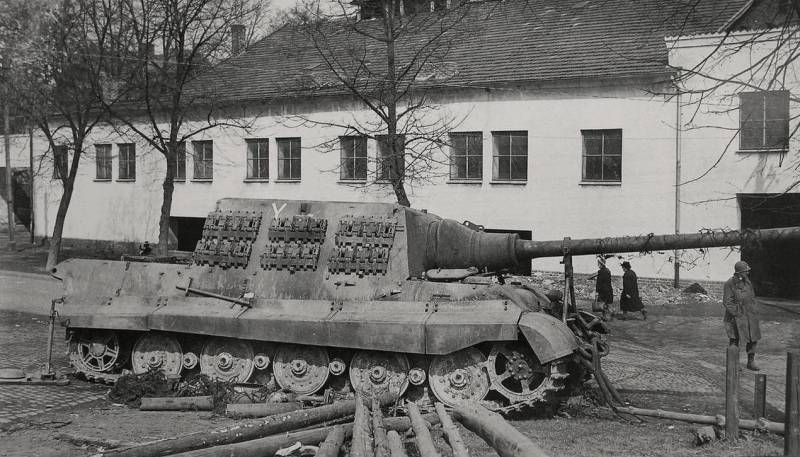 According to the memoirs of the famous German tanker Otto Karius, the 8-meter barrel of a tank destroyer cannon loosened up after a short off-road trip. After that, it was extremely problematic to aim normally with the gun, the Jagdtiger needed maintenance and repair.

In his opinion, the design of the stopper, which fixed the 128-mm gun in the stowed position, was also unsuccessful. The stopper could not be turned off from inside the ACS. Therefore, some of the crew members had to leave the combat vehicle for a while.

Difficulty with being overweight

The “King Tiger”, on the basis of which the “Jagdtiger” was designed, was not itself a successful car in terms of chassis and dynamic characteristics. In the version of the tank destroyer (with enhanced armor and a powerful cannon), the chassis felt completely lousy, and the Jagdtiger itself naturally suffered from obesity.

The combat weight of the self-propelled gun could reach up to 75 tons. For such a mass, the Maybach HL 230 engine with a capacity of 700 hp. with was definitely not enough. But the Germans had nothing else at that time. For comparison: the Germans installed the same engine on the Panther, the mass of which was almost 30 tons less.

It is not surprising that the mobile bunker turned out to be clumsy, had poor dynamics and did not accelerate over rough terrain faster than 17 km / h. At the same time, the engine consumed a huge amount of fuel at a time when it was already in short supply in Germany.

The Yagdtigra’s cruising range on the highway did not exceed 170 km, on rough terrain – only 70 km. Another problem was that not every bridge could withstand a self-propelled gun weighing more than 70 tons. 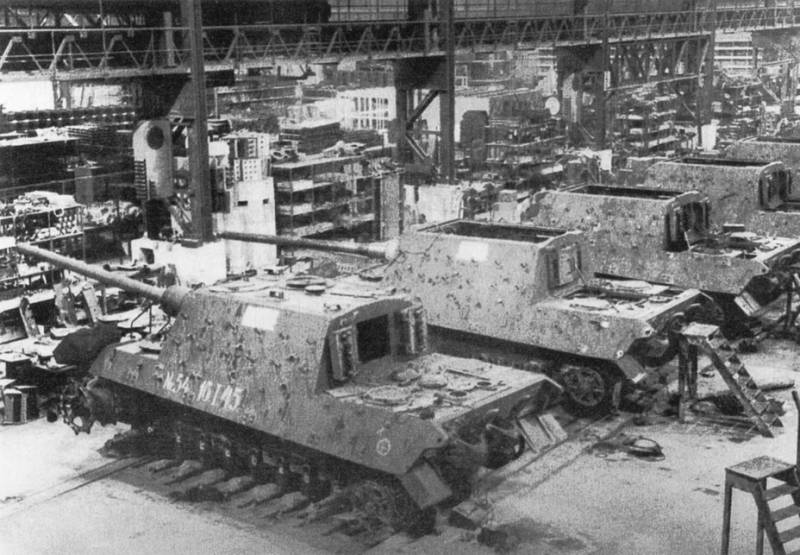 The “obesity” of the combat vehicle was caused not only by the use of a weapon of monstrous power, the anti-tank version of which weighed more than 9 tons, but also by the most powerful armor. The hull went almost unchanged to the self-propelled gun from the “Royal Tiger”. Its upper frontal plate, 150 mm thick, was installed at an angle of 40 degrees. The lower armor plate had a thickness of 120 mm and was installed at the same slope.

The best of all was the armored cabin, for the manufacture of which pre-war armor plates, intended for the Kriegsmarine, went. The thickness of the frontal armor was 250 mm, while the angle of inclination was 15 degrees. Allied tanks and anti-tank artillery were unable to penetrate this armor.

The armor and the cannon partially compensated for the low mobility characteristics of the combat vehicle, as well as the unreliability of the chassis, which simply could not cope with such a weight. If the self-propelled gun had time to take a position, it could confidently hit the enemy’s armored vehicles, not worrying much about maneuverability.

At the same time, the car did not belong to unobtrusive ones, the height of the “Jagdtigr” was almost three meters. Covering the self-propelled gun on the ground was a real problem, which was quite well used by the American assault aviation, dominating the battlefield. Even the anti-aircraft self-propelled guns Wirbelwind, Flakpanzer and Ostwind, attached to the Jagdtigers battalions, did not help much.

Tank destroyers “Jagdtiger” were mass-produced from 1944 to 1945. almost until the very end of World War II. At the same time, this anti-tank self-propelled gun turned out to be very difficult and expensive to manufacture.

In conjunction with the destruction of factories by air bombing of the Allied aviation and interruptions in the supply of parts and materials due to the increasingly catastrophic state of affairs at the front for Germany, the industry managed to produce an extremely small number of Jagdtigers. According to various estimates, from 79 to 88 giant self-propelled guns were produced. 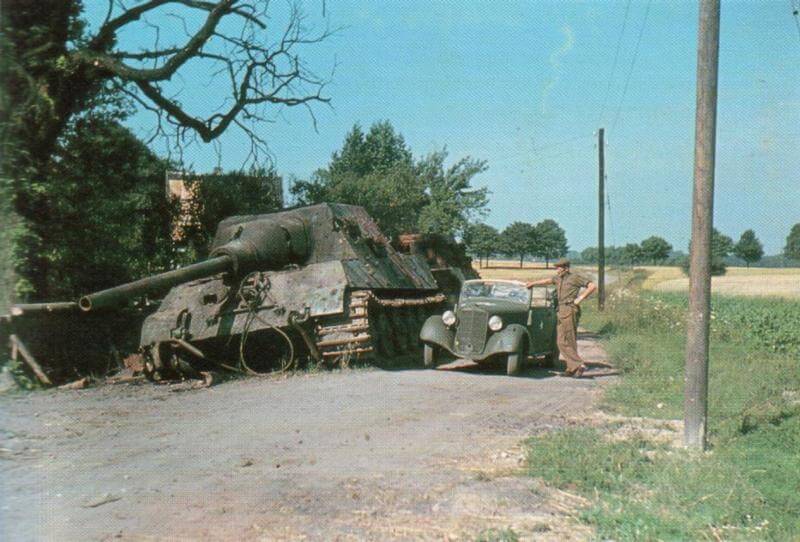 All “Jagdtigers” built and accepted by the troops fought as part of two separate heavy anti-tank battalions. These were the 512th and 653rd heavy tank destroyer battalions, which operated mainly on the Western Front in the late winter of 1944 and in the spring of 1945.

These combat vehicles could not make any significant contribution to the course of hostilities due to their small number. Despite this, in a number of battles, the Jagdtigers proved their effectiveness, inflicting significant damage on the advancing Allied forces.

The commander of the second company of the 512th heavy tank destroyer battalion was the German tank ace Otto Carius. In March 1945, six Jagdtigers of his tank company successfully proved themselves in the defense of the bridge over the Rhine in the Remagen area. Without losing a single self-propelled gun, the Germans repelled the attacks of the Allied tanks, destroying a significant amount of armored vehicles.

In these battles, the power of the 128-mm gun was once again confirmed, which did not leave a single chance for the Sherman tanks, successfully hitting them at a distance of 2.5 and even 3 km.

For other tanks, the Jagdtigers were practically invulnerable. To hit them head-on was extremely problematic, especially from distances at which the Germans could already conduct effective fire.

It is known that most of the losses of the 653rd battalion were not caused by the impact of enemy tanks, but were the result of airstrikes and artillery shelling (30 percent). Another 70 percent of self-propelled guns were out of order for technical reasons or as a result of defects. And they were blown up by the crews. Destroyed “Jagdtigers” and due to the use of fuel and ammunition.

At the same time, one “Jagdtiger” of the 653rd heavy battalion of tank destroyers was nevertheless attributed to Soviet tankers.

On May 6, 1945 “Jagdtiger” of this battalion was shot down in Austria while trying to break through to American troops. The tank destroyer crew was unable to undermine the self-propelled gun under the fire of the Soviet troops, as a result of which it became a legitimate trophy of the Red Army.

Today everyone can see this self-propelled gun in the exposition of the armored museum in Kubinka. 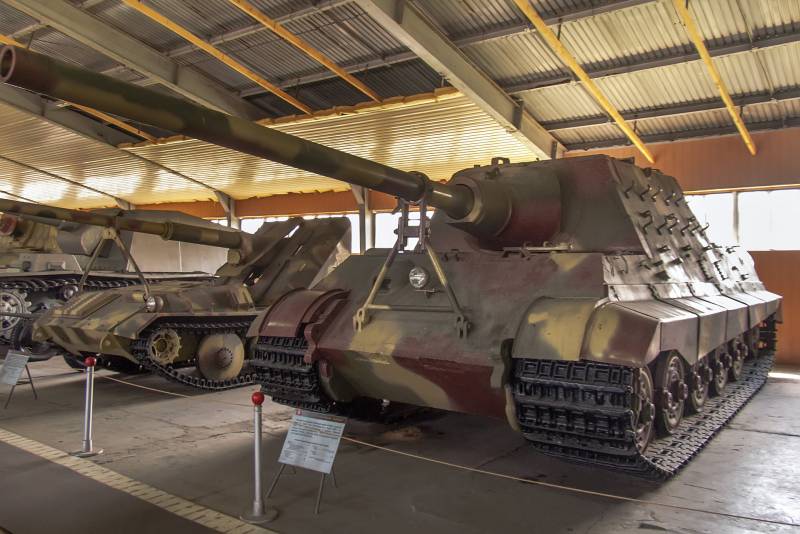 It can be noted that the Germans themselves understood all the vulnerabilities of the Jagdtigr and its weak points, immediately equipping the combat vehicle with stationary subversive charges for self-destruction. Agree, not the most common practice.

The standard charges were placed under the engine and under the breech of the gun. The crew was supposed to use them in the event of a technical malfunction and the impossibility of evacuating the self-propelled gun to the rear.

On the one hand, the explosive charges helped not to hand over the unique military equipment to the enemy in working order. On the other hand, the charge of explosives under the breech of the gun hardly added optimism to the crews of anti-tank self-propelled guns, many of which were poorly prepared.

Along with technical difficulties, the poor training of German tankers who fought on the Jagdtigers at the end of World War II became a serious problem for the Reich’s tank forces.