On October 14, at the Mitsubishi Heavy Industries shipyard in Kobe, the Taigei submarine was launched. This is the lead ship of the new project 29SS, with which it is planned to replace obsolete submarines in the future. The new project combines modern systems with ideas that were previously considered obsolete.

Under the code 29SS

According to known data, the technical and technological groundwork for a promising submarine project began to be created in the middle of the two thousandth years. Then, research began on the topic of new radio-electronic, hydroacoustic and computing facilities, as well as experiments in the field of air-independent power plants.

Work on new electronics and other components was successfully completed by the mid-tenths. Shortly before this, it was decided to abandon the use of VNEU in favor of a different architecture of the power plant. Studies and experiments have shown that a diesel-electric circuit with the use of modern storage batteries will be more efficient and quieter. 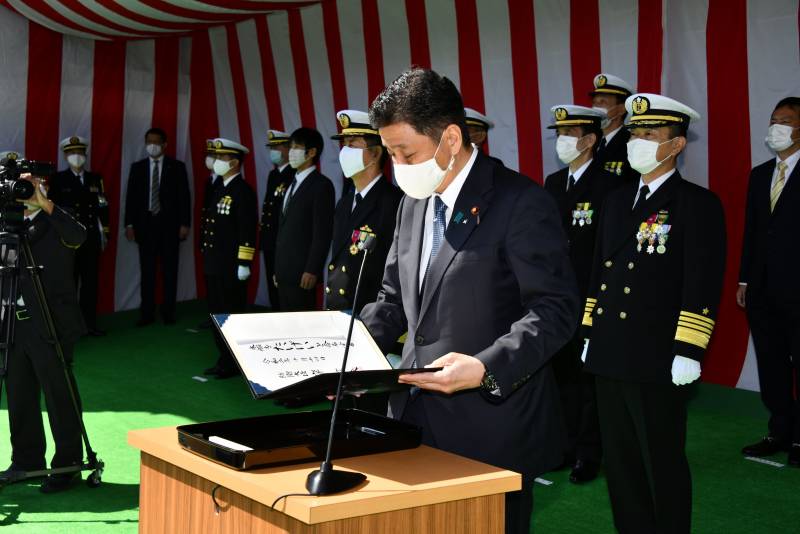 In 2015 and 2017 two non-nuclear submarines of the “Soryu” type with a rebuilt power plant were laid. They lost their Stirling engines, but kept the diesel generators and received lithium-ion batteries. To date, the first of these submarines has been tested and confirmed the correctness of the solutions applied.

By 2017-18. the main components of the new ship systems have been tested and recommended for use in a full-fledged project. By the beginning of 2018, a project with the code 29SS was prepared, according to which it was planned to build new boats. Recently, the project has been named after the lead ship – “Taigei”.

The Japanese Maritime Self-Defense Forces are currently planning to build seven submarines of a new type. There are contracts for four ships, and one of them is nearing completion. Two more orders are still at different stages of construction, their completion is expected in the foreseeable future.

The lead submarine “Taigei” was laid down in March 2018. The launch took place a few days ago, on October 14. Now the boat has to go through all the necessary tests, after which it will be able to become part of the MSS. Acceptance by the customer is expected in the spring of 2022. Thus, the construction took quite a long time, and the tests will not be quick either – this is due to the high complexity of the project. In addition, in the near future, “Taigei” is planned to be operated mainly for gaining experience, and not as a full-fledged combat unit. 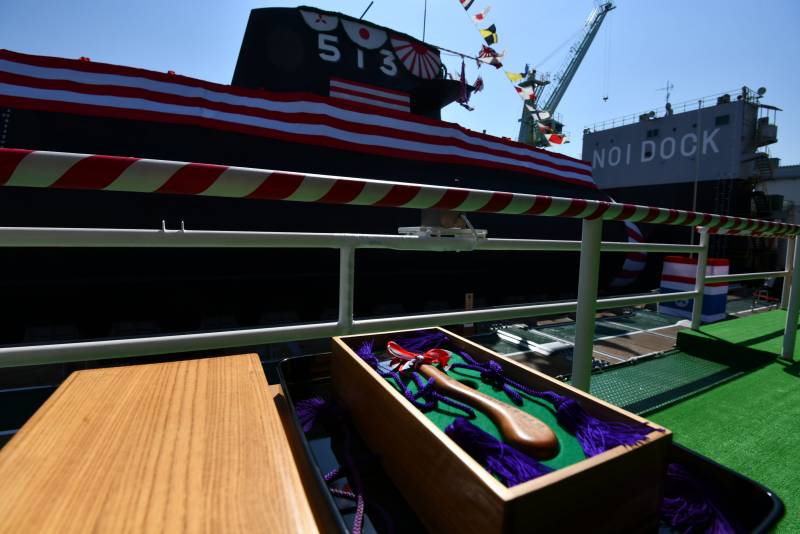 The new boat is quite expensive. Its construction cost approximately $ 710 million. For comparison, serial Soryu submarines cost less than 490 million, and their diesel-electric modification requires a cost of $ 608 million.

The construction schedule for the next four ships is still unknown. It can be assumed that shipbuilders and the military are planning to reach a high rate of construction with the annual delivery of finished ships. In this case, the seventh planned submarine will begin service in 2027. However, certain difficulties associated with the complexity of the project may lead to a shift in terms to the right. 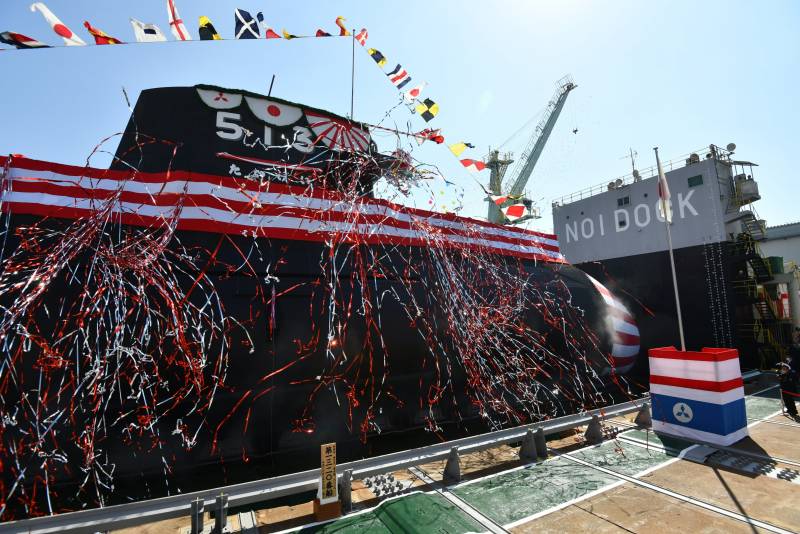 The length of the new boat is 84 m, the width is 9.1 m. The surface displacement is 3 thousand tons, the underwater one must exceed 4.2-4.3 thousand tons. A streamlined body was used, slightly different from the “Soryu”. On top of it is a modified wheelhouse fence with horizontal rudders. The stern planes are made in an X-shaped pattern.

The power plant of the ship was built using diesel generators, lithium-ion storage batteries and a propeller driven electric motor. Component types and characteristics are not disclosed. It was previously mentioned that such a power plant scheme allows you to increase the main characteristics and gain advantages over other architectures.

For the 29SS project, new electronic reconnaissance and communications equipment has been developed. Also, a “new generation” hydroacoustic station based on fiber-optic arrays was created. Due to this equipment, the ability to detect and track underwater targets will improve. On the basis of existing developments and components, a new combat information management system has been created.

The armament of the new boats consists of four 533 mm bow torpedo tubes. The submarine will be able to use the torpedoes in service, incl. the latest models Harpoon missiles will be launched using torpedo tubes. 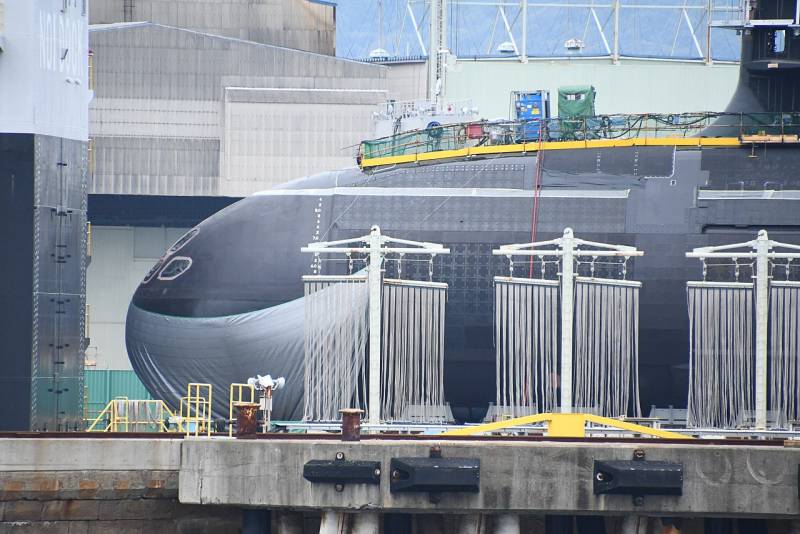 A few days before the descent. The design of the nose cone is visible

The ship’s crew consists of 70 people. Comfortable living and service conditions are provided on board. A high degree of automation will reduce loads. It is especially noted that during the construction of the submarine, the special needs of female submariners were taken into account. This feature of the 29SS project is important in view of the fact that this year the Academy of Submarine Forces for the first time accepted female cadets.

In the near future, the lead diesel-electric submarine of the new project will be put on sea trials, in which it will have to demonstrate all its advantages over the equipment of the previous types. In general, positive results are expected in all major areas, from CIUS to conditions for the crew. However, the most interesting in the project is the power plant of the original architecture.

According to the results of studies of the recent past, MSS Japan lost interest in air-independent power plants and decided to return to the diesel-electric scheme, but at a new technological level. A similar scheme has already been tested on the modified diesel-electric submarine “Soryu” and has shown its advantages. As a result, promising ships will be equipped with diesel engines and batteries. 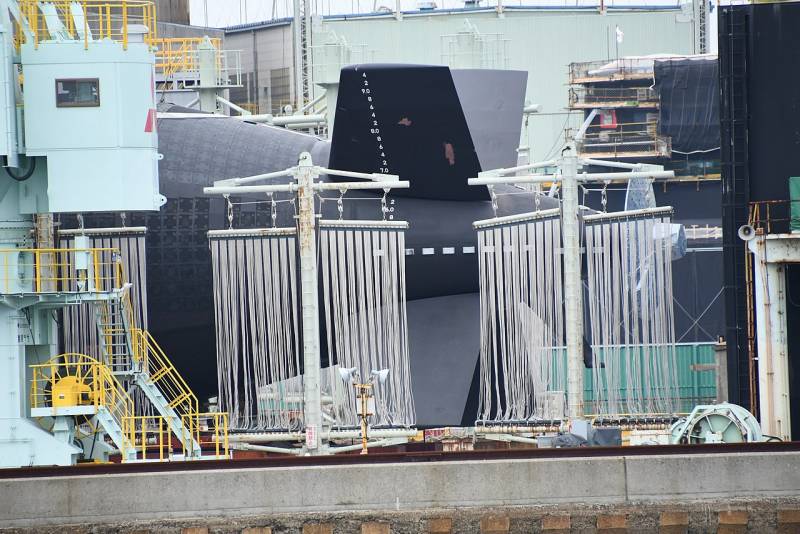 The stern of the ship. Propeller hidden

The main advantage of diesel-electric submarines over Soryu-type submarines is less noise. Unlike Stirling engines, an electric power plant in all modes, incl. produces less noise underwater. In addition, lithium-ion batteries are used, surpassing traditional lead-acid ones in all respects.

At the same time, the selected batteries are not without drawbacks. First of all, this is a high cost. In addition, batteries generate heat during charging and discharging, and may emit toxic vapors or ignite if operating modes are abnormal. All this imposes special requirements on the equipment of the accumulator pits, on which the survivability and stability of the ship and the life of its crew depend.

Against the background of competitors

The construction of the Taigei submarine and the plans of the MSS command are very interesting – especially against the background of previous Japanese developments and current plans of foreign countries. It is believed that the diesel-electric circuit is outdated, and the non-nuclear submarine fleet needs fundamentally new systems. Developing these ideas, Japan was among the first countries to master and use in practice the technologies of VNEU. Now she is the first to refuse them.

The revised version of the Soryu project has already confirmed the correctness of such a decision, and now a fundamentally new project has been created. Until the end of the decade, the 29SS / Taigei project will significantly affect the development of the submarine forces of the MSS Japan. In addition, it cannot be ruled out that Japanese work will affect the world’s submarine shipbuilding. And then other countries will also return to diesel-electric power plants.