The Navy and the aviation industry continue a large-scale program of repair and modernization of the Ka-29 transport and combat helicopters. After restoration and renovation, the equipment is returned to service and strengthens the naval aviation. In recent years, the fleet of several units has been updated in this way, and soon the improved Ka-29 will add new parts.

From design to operation

The future Ka-29 was created in the seventies; the first flight of the prototype took place in 1976. Serial production was launched in 1984 at the Kumertau Helicopter Plant. The equipment rolled off the assembly line until 1991, after which production was suspended indefinitely – in fact, forever, new helicopters were no longer produced.

Already in 1985, the naval aviation of the USSR Navy received the first serial Ka-29s and began to master them. Then there were events to develop methods of combat use. In August 1987, the new helicopter was officially adopted. By that time, the customer managed to receive a significant part of the helicopters, due to which it was possible to equip several units.

In total, 1984-91. 59 serial Ka-29s were built. Most of them, 46 units, entered the Navy. Other helicopters were transferred to other structures of the Ministry of Defense. In particular, naval helicopters were studied at the 344th Center for Combat Use of Army Aviation (Torzhok). 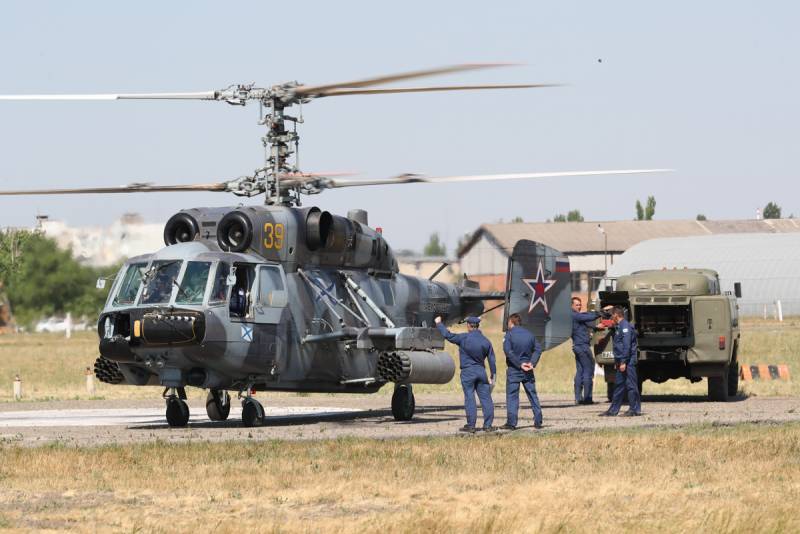 In naval aviation Ka-29 served in combat units of the Northern, Baltic and Pacific fleets. The training units worked as part of the Black Sea. Subsequently, after the collapse of the USSR, this led to the division of equipment between the two countries. The bulk of the helicopters remained in Russia, another 5 units. passed to Ukraine.

A new type of transport-combat helicopter was created to support the actions of the marines. Ka-29s were supposed to deliver fighters to the shore and provide fire support with the help of cannon-machine gun, missile and bomb armament. The passenger cabin accommodated 16 fighters with weapons; 4 points of the external sling housed 1,850 kg of aircraft weapons.

Depending on the task at hand, the helicopters could operate from coastal airfields or from the deck of ships. The main carriers of the Ka-29 were the large landing ships of the project 1174 “Rhino”. Each of the three BDKs of this type could carry 4 helicopters – with the ability to land 64 soldiers. Also, helicopters flew from aircraft carriers of various types. Experiments were carried out with the operation of the Ka-29 on ships with a single take-off pad. They were turned down in 1987 after the crash.

At the turn of the eighties and nineties, difficult times fell on the armed forces in general and naval aviation in particular. At first, the intensity of the operation of various equipment fell, incl. helicopters Ka-29. Then the main part of the aircraft-carrying ships capable of receiving transport-combat helicopters was withdrawn from the combat composition of the fleet. In addition, the disintegration of the country led to the division of the naval materiel. 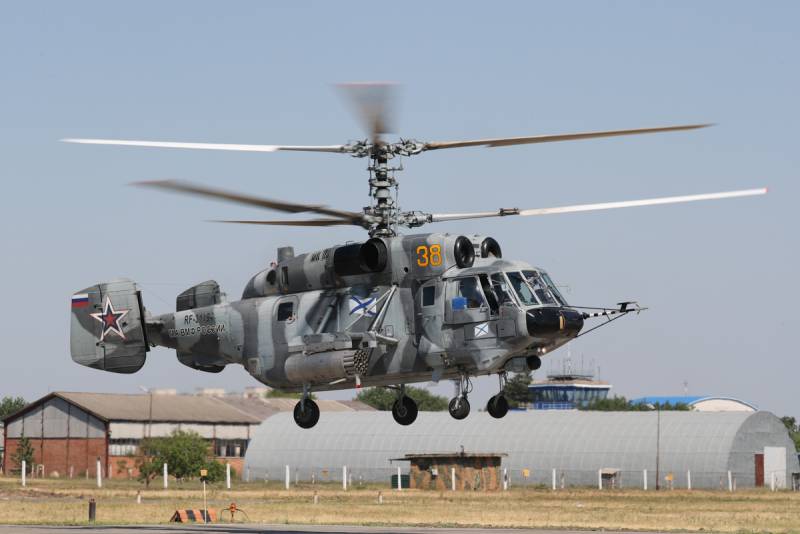 All these events hit the state of the Ka-29 fleet and its prospects. Helicopters with special capabilities turned out to be unnecessary – and there was no way to maintain their technical condition. The equipment was idle and its condition was constantly deteriorating. In the late nineties, the fleet handed over to the Internal Troops up to 15-16 helicopters.

Due to downtime and lack of proper maintenance, the condition of the helicopters was constantly deteriorating. The navy was forced to withdraw them from the combat composition with the placement in reserve or with a complete write-off. As a result, by the end of the 2000s, no more than 10-20 vehicles remained in service.

It should be noted that even against the background of the difficult events of the nineties, work continued on the development of helicopter technology. So, in 1997, two flying laboratories based on the Ka-29 were taken for testing, designed to test methods for the combat use of the Ka-50 attack helicopter. One of them carried non-standard weapons, the other received a sighting and navigation system from the Ka-50 and became an air observation and target designation point. In January-February 2001, a combat strike group consisting of two Ka-50s and a single Ka-29VPNTSU was tested in real conditions of the Chechen conflict.

At the beginning of the 2000s, it became known about the planned return of Ka-29 helicopters to full service. It was proposed to repair and modernize 10 vehicles for basing on the expected landing ships “Mistral”. To meet modern requirements, the helicopters had to receive new electronic equipment and modern weapons. However, the detailed composition of the new electronic complex was not disclosed. 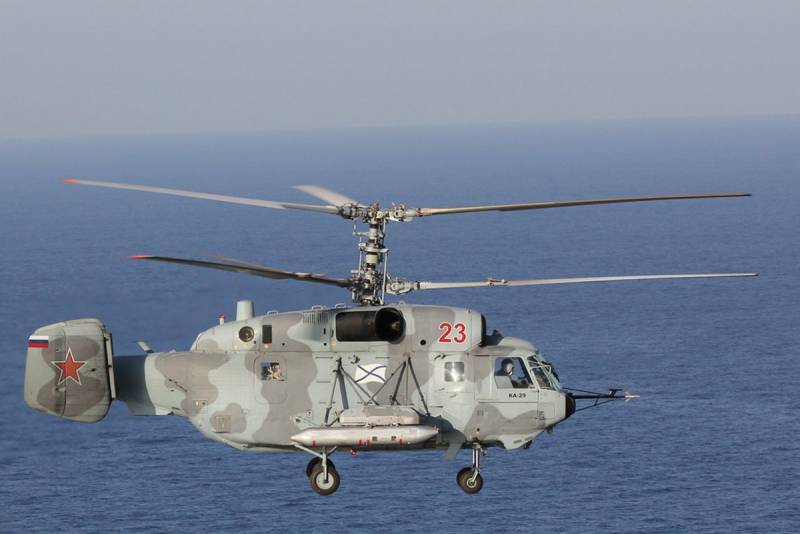 The first batches of the repaired Ka-29s were handed over to the fleet in 2016-17. She now serves in the Pacific and Baltic fleets. Then the helicopters of the Northern Fleet were repaired and modernized. According to the reference book The Military Balance, due to such measures, the number of transport-combat helicopters in the ranks is approaching three dozen.

The other day Izvestia announced the expansion of the Ka-29 helicopter operation areas. From next year, they are planned to be involved in the protection of the country’s Arctic borders. Such tasks will be divided between parts of the Northern and Pacific Fleets. Ka-29s from the 830th regiment of the Northern Fleet will operate in the western regions, the other lines will be given to the 317th mixed air regiment serving in Kamchatka.

The Ka-29 transport and combat helicopter is quite old – its creation was completed in the early eighties. At the same time, it is still not outdated and retains good potential. Timely modernization by replacing individual components and assemblies allows you to continue to operate for a long time with the full implementation of all design possibilities.

In fact, a real “flying infantry fighting vehicle”, capable of serving the marines in special conditions of their work, returns to full-fledged operation. The Ka-29 is not the only Russian helicopter capable of landing and supporting troops, but at the same time it has important advantages over other models. Thus, the naval Ka-29 is more compact than the Mi-8 family, although it carries similar weapons. It compares favorably with the combat Mi-24 in the larger capacity of the landing cockpit. In addition, the Ka-29 is adapted to work over the sea and on the deck of the ship. 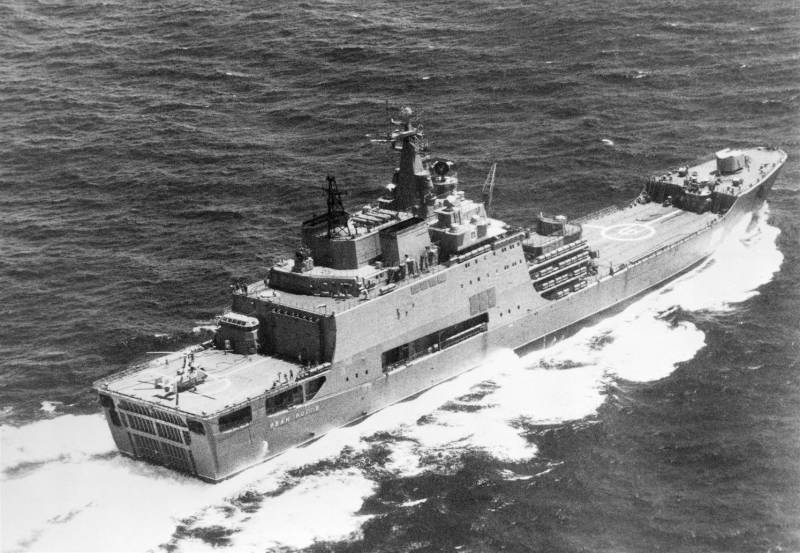 Large landing craft “Ivan Rogov” with a helicopter on the stern platform, 1985

Such a rotary-wing platform, equipped with a modern sighting and navigation system and other latest-model equipment, as well as compatible with current aviation weapons, is of great interest to the Navy. This interest has already led to the emergence of several orders and the modernization of combat equipment.

The process of returning the Ka-29 to service was launched several years ago and is yielding real results. Re-equipment of several units operating in the main strategic directions was carried out. In the near future, it will be possible to ensure the presence of transport and combat helicopters in a new region, in the Arctic. There they will be able to supplement other equipment with different capabilities.

In general, the history of the Ka-29 helicopter service is very interesting. A specialized machine with broad capabilities appeared on the eve of difficult times, which did not immediately realize its full potential. Nevertheless, several decades later, the necessary capabilities were found – and the Ka-29 will again be able to show itself in the best possible way.