The last, the most profound modernization of platform 4310 KamAZ-5350 “Mustang-M”. Source: gruzovikpress.ru

In the previous parts of the story about the birth and development of the KamAZ-4310, we bypassed the operation of a tactical truck in the Soviet Army. Meanwhile, the 4310 and its modifications were widespread in the armed forces, although they were noticeably inferior to the original military Ural-4320.

In addition to onboard KamAZ trucks and artillery tractors (guns up to 7 tons), 4410 truck tractors were used in the army for towing 15-ton semi-trailers. From the very moment the military truck appeared from Naberezhnye Chelny, a pressurized K-4310 van body was developed for it. The van was a modernized extended version of the Ural analogue of the K-4320. The body had a payload of about 5,800 kg and a dead weight of 1,520 kg. 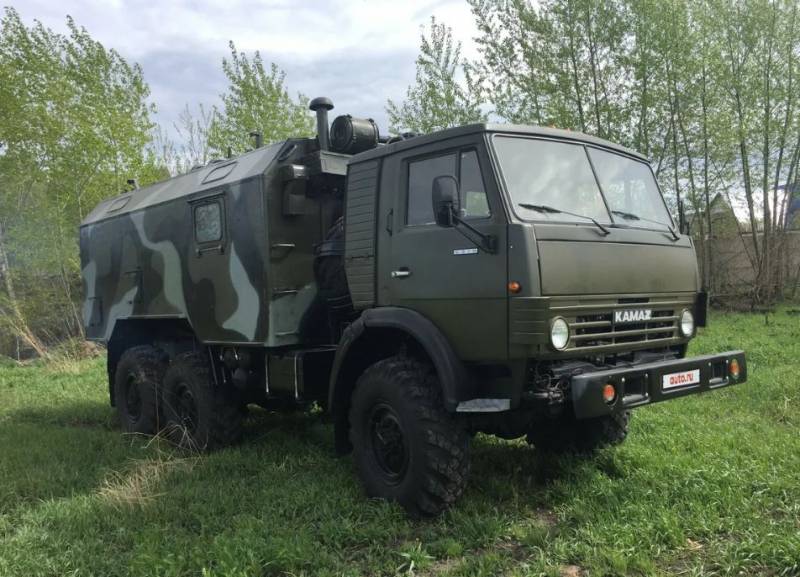 Off-road KamAZ with a canopy from the Urals-4320. Source: auto.ru

The KamAZ-4310 platform was widely used in the signal troops. The first was the R-417 “Baget-1” mobile digital tropospheric radio relay station, developed in the early 1980s. To work in rough and mountainous terrain, the R-423-1 Brig-1 station was later created, which also received a chassis from Naberezhnye Chelny as a mobile platform.

KamAZ-4310 also carried SPN-4 noise jamming systems, R-934B automated jamming stations, which made it possible to detect and suppress aircraft radio communications. Since 1986, the 35N6 antenna installation and the hardware of the Kasta-2E1 low-altitude radar station have been mounted on trucks. The station, located on two KamAZ trucks, made it possible to detect aircraft in the air at a distance of up to 105 km and was used by the air defense forces, coastal and border guards.

In the interests of the rear 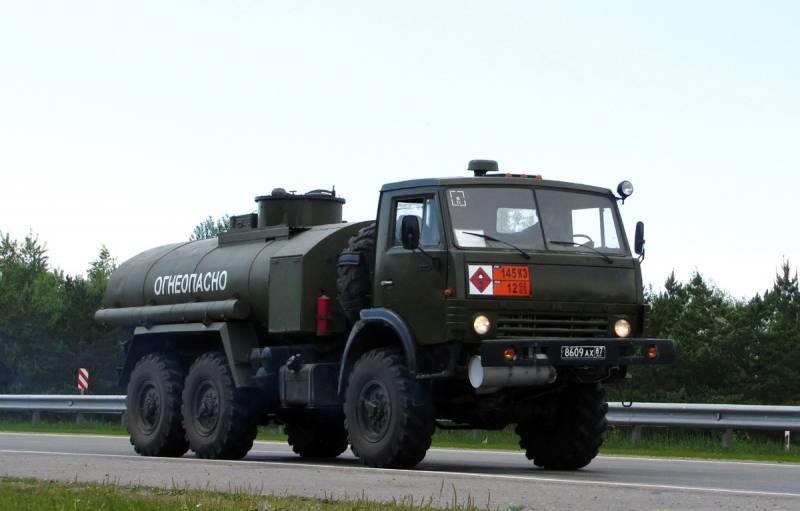 The relatively long platform of a military truck and a carrying capacity of 5 tons were excellent for placing tank trucks for various purposes.

We will not separately load readers with a cumbersome abbreviation. We only note that on the 4310 platform they built oil tankers with a 5.5-cc tank for diesel fuel (gasoline, kerosene) and a 300-liter tank for oil. A simpler machine with a 7-cc tank exclusively for motor fuel is still working in the army. For the RChBZ troops, KamAZ-4310 was built with a multipurpose auto-filling station ARS-14K to solve a wide range of tasks – degassing, disinfection and deactivation of equipment, buildings and terrain. Smoke screens were supposed to be installed in the troops by the TDA-2K vehicle, capable of masking objects up to 1 km long. 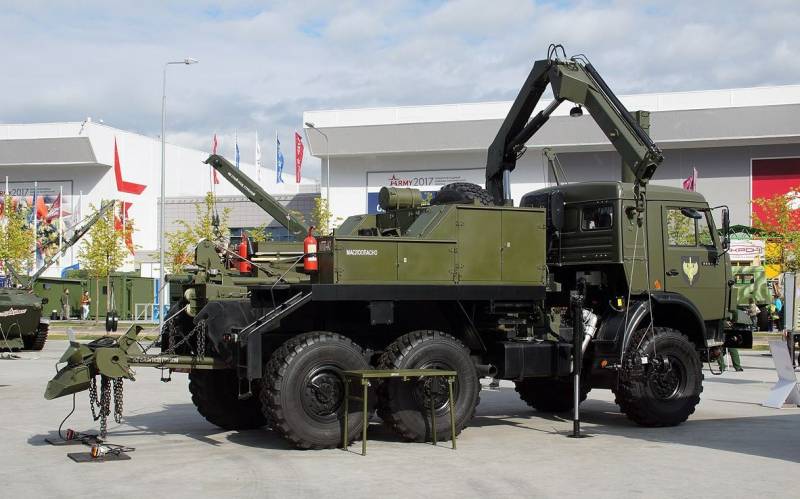 One of the latest variations of the MTP-A2 military tow truck at the Army-2017 forum. Source: dishmodels.ru

The MTP-A2 light-class technical assistance vehicle was developed at 21 NIIII in the late 1980s. But a tow truck based on KamAZ-4310 went into production only in the early 1990s. The damaged equipment MTP-A2 could be transported in a semi-submerged state. The MTP-A2.1 tow truck became similar (only on the Ural-4320 base). That is, two identical highly specialized technical assistance vehicles on different platforms are currently serving in the army.

KamAZ received the baptism of fire in the mountains of Afghanistan. At the same time, not only four-wheel drive trucks participated in the conflict, but also completely civilian vehicles of the 53rd series.

KamAZ trucks have deservedly become popular and beloved vehicles among drivers. First of all, the comfortable cab with a berth was highly appreciated. The army did not know such a luxury before – the jobs of Uralov and ZiL were both closer and simpler. Few problems arose with difficult-to-operate KamAZ-740 diesel engines, annoying leaks of coolant and engine oil.

Also in Afghanistan, there was a weak mine resistance of cabover trucks. 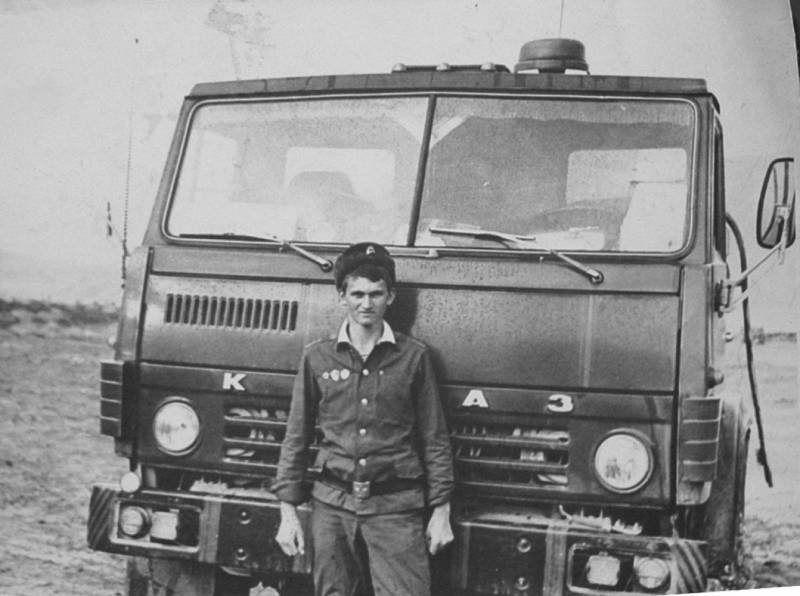 After the war, in the late 90s, the Russian army conducted comparative tests of KamAZ-4310 and Ural-4320 for detonation with an anti-tank mine. Similar mannequins were planted in the cabins. And they detonated a mine with 6.5 kg of explosives under the front left wheel. In the case of the 4310, this was fatal to the driver. After the explosion, parts of the dummy were in a crater, the wheel arch was torn apart, and fragments riddled the roof of the cab. In the video report from the tests, you can hear the following eerie thesis:

“There is no living space for the driver.”

There was an embarrassment with an all-terrain vehicle from Miass on similar tests. The truck was sent to the mine in second gear with the steering wheel fixed, but the detonator was triggered only by the last wheel on the left side. The wheel was blown off the hub by an explosion, but the Ural-4320 was able to continue moving on its own in the future.

This allowed us to conduct another crash test. Only now the truck with the dummy was being pulled by a cable. This time everything worked properly. And after the mine detonated at the dummy, even a foot on the accelerator pedal remained. In fact, only minor contusions and minor injuries threatened the passenger and the driver of the bonneted truck.

The cabover layout of KamAZ (associated primarily with its unification with civilian vehicles) significantly weakened the protection against frontal shelling.

Bullets falling below the windshield line freely penetrated the cockpit and hit the crew.

Ural-4320, to a certain extent, was deprived of this drawback.

However, both cabins from the very moment of development had the main drawback – the impossibility of integrated booking.

The local armor had to be hung on the cockpit panels. That increased the final mass and was not particularly effective.

Eternal competitors in the sand

And one more story of comparing competitors from Miass and Naberezhnye Chelny.

The problem of the three-axle 6-ton KamAZ was the overloaded front axle, which accounts for up to 35% of the vehicle’s weight when fully loaded. This was the reason for the last third place in all tests. 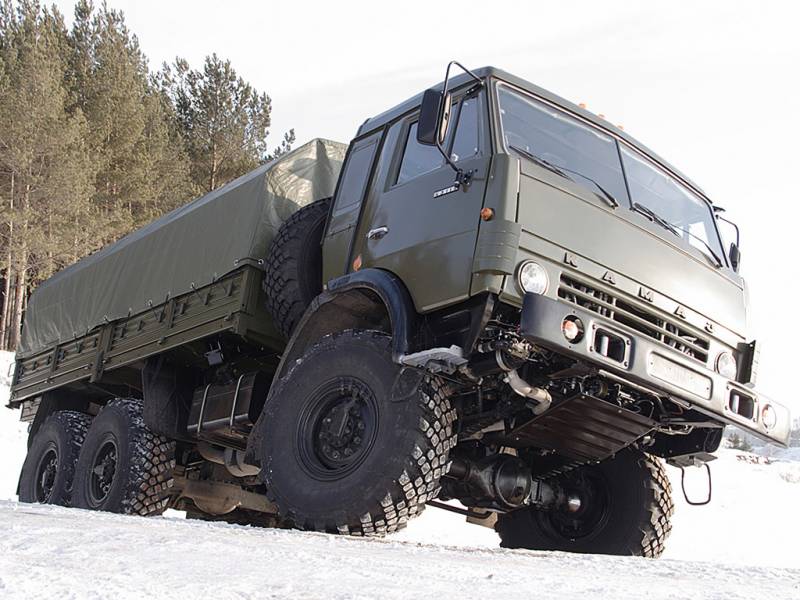 In the bonnet Urals (similar carrying capacity), the front wheels accounted for about 31% of the mass. It would seem that this is not the most cardinal difference. But this (including) allowed the all-terrain vehicle from Miass to win all tests. And maintain the highest speed on the sand – 30 km / h.

The Ural also surpassed its competitors in traction and coupling properties, that is, traction on the hook.

In search of perfection, the testers conducted a series of experiments with different tire pressures. As expected, it turned out that the lower the pressure (within reasonable limits, of course), the higher the pull on the hook.

All comparisons with the Urals and combat experience did not benefit the KamAZ all-terrain vehicles.

And over time, the Ministry of Defense transferred these vehicles from the tactical military level to the operational one. Only the Ural-4320 and its modifications remained in the role of a tactical truck.

In the late 1980s, the military formulated requirements for new combat KamAZ trucks. In accordance with them, the army waited for two-, three- and four-axle all-terrain vehicles with independent suspension, hydromechanical transmission, more powerful engines and with the ability to overcome a ford up to 1.75 meters deep. (Previously it was 1.5 meters.)

At the same time, the new cars had to keep an average speed on rough terrain of at least 40 km / h, which was unattainable for the classic 4310.

Development work received the code “Mustang”. We began to develop hydromechanics together with US.

But with the collapse of the Soviet Union, the topic was closed. 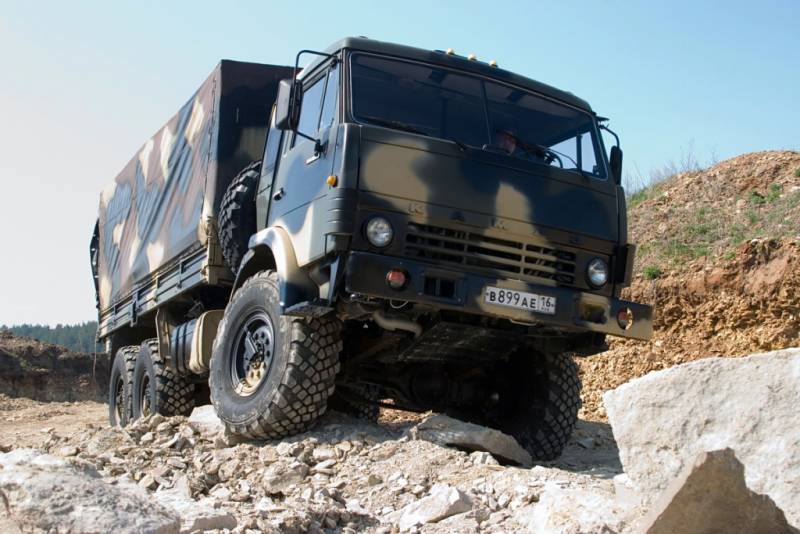 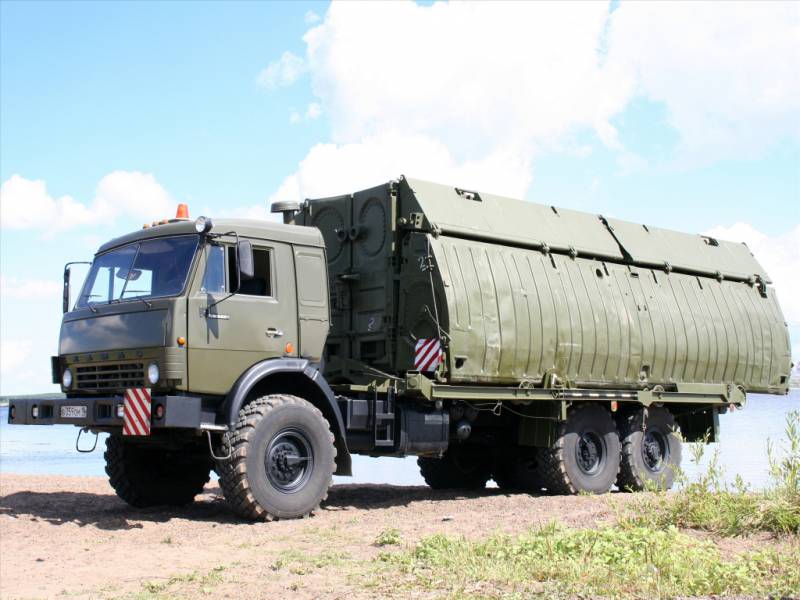 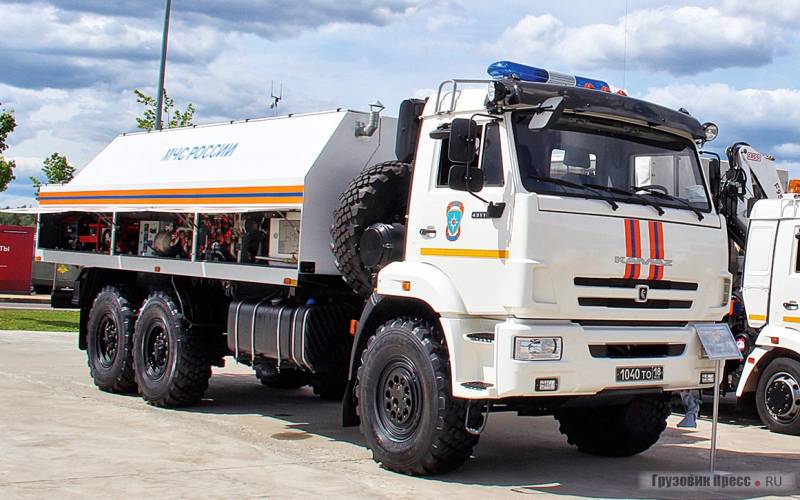 KamAZ-43118 has changed slightly in appearance since the mid-1990s. In the photo: a modernized mobile complex for special treatment (MKSO) (chassis KAMAZ-43118), manufactured by Promsnabzashita. Source: gruzovikpress.ru

Naberezhny Chelny did not forget about the modernization of the original 4310 machine.

In the late 1980s (in parallel with work on the “Mustangs”), they began to design the conditionally second generation of military off-road vehicles.

By the mid-1990s, a 240-horsepower KamAZ-43114 with a carrying capacity of 6 tons and a heavy 10-ton KamaAZ-43118 with a 260-horsepower 7403 diesel engine appeared in the Russian army. The latter model was fitted with (among other things) sections of the new PP-91 pontoon fleet. The truck’s wheelbase was lengthened by 353 mm. The track was slightly expanded and a 10-speed gearbox was installed.

It turned out to be a kind of cabover giant, which partially occupied the niche of KrAZ trucks imported by that time. The truck tractor, which received the updated index 44118, was also revised.

On the second generation series, the plant workers for the first time tried to establish a local cabin reservation.

By the way, due to the sealing of the equipment of the trucks, in Naberezhnye Chelny it was still possible to achieve the required ford depth of 1.75 meters. 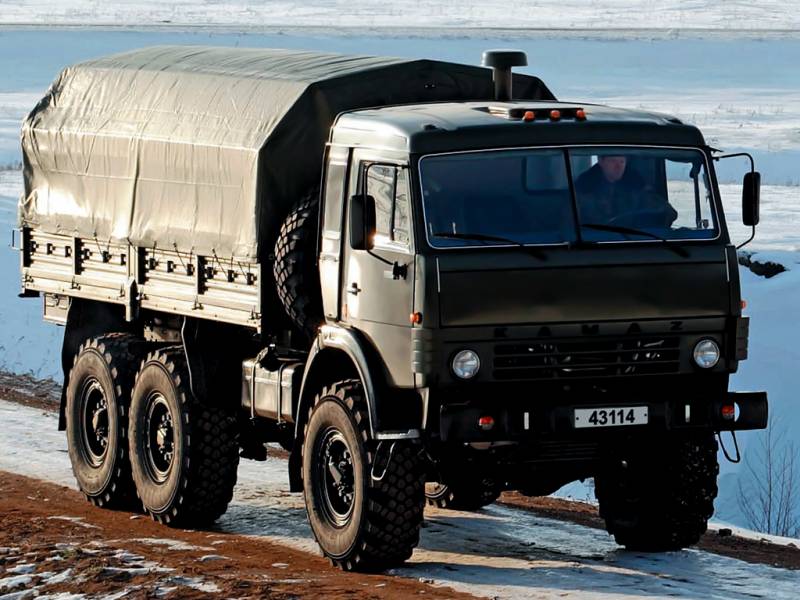 The Mustang theme ran from 1989 to 1998. Such a long period was explained by the difficult financial condition of the plant, and by the fire that occurred in the engine shop, the elimination of the consequences of which required $ 150 million in the early 1990s.

Thus, two branches of military off-road KamAZ vehicles appeared in the Russian army at once – the classic descendants of the 4310 model and the new ones from the Mustang family.

In further history, the range of machines only expanded. The factory workers offered the army armored versions. And even extreme 730-horsepower all-terrain vehicles.