KamAZ-43105 is an agricultural truck in military service. Source: en.wheelsage.org

The previous part dealt with the construction of the Kama Automobile Plant and the development of a production range of cars at the Likhachev Plant in Moscow.

The main prototype of the famous Kama truck was the ZIL-170, which in various modifications (from 1968 to 1975) was built in 53 copies. At the final stages of development work, specialists from the engineering group of the Kama Automobile Plant worked together with Moscow engineers.

From the very beginning, the development of the military all-wheel drive version of the 4310 went with maximum unification with civilian vehicles.

The most characteristic part of the truck was, of course, the cab. Its overall and internal dimensions provided a comfortable fit for three people and the placement of the necessary equipment in it. The cockpit had flat glass windscreens, separated by a thin pillar – this was the best fit for military use. Obviously, the ZIL engineers took into account their not the most logical solution with the complex curved windshield of the 131st car.

Special attention was paid to the equipment of the hoodless cab: thermal and noise insulation along the entire inner surface, a heater with a heating capacity of 6,100 kcal / h, flange seals for door openings, a sprung driver’s seat and a berth (depending on the version). The opening outer panel of the bulkhead provided access to the parts of the electrical system located on the inner panel.

Various measures were taken to ensure the manufacturability of the structure: the location of the welds made it possible to use automatic welding. The shape of the cab base parts eliminated the presence of “pockets” that could lead to corrosion. 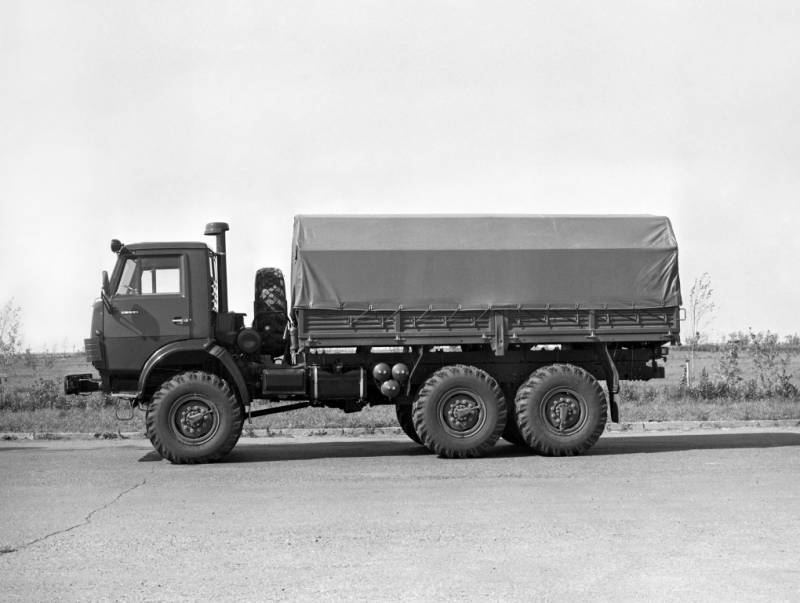 Army KamAZ-4310 with a winch, tire inflation and spare wheel behind the cab. Source: en.wheelsage.org

The chassis was also, if possible, unified with civilian counterparts. The front axle of SUVs received an original gearbox housing combined with a load-bearing beam. In its design, many components were used from the rear driving axles. The rear axles of 6×6 models did not differ much from their counterparts in 6×4 models. As well as the suspension.

When developing the design of the drive axles, the engineers deliberately abandoned the wheel reduction gears most suitable for off-road conditions, which significantly increase the ground clearance. The fact is that their use led to an increase in the cost price. Therefore, given that rear-wheel drive road trucks will prevail in the production program of the KAMAZ under construction, preference was given to two-stage walk-through axles, which are less expensive to manufacture. 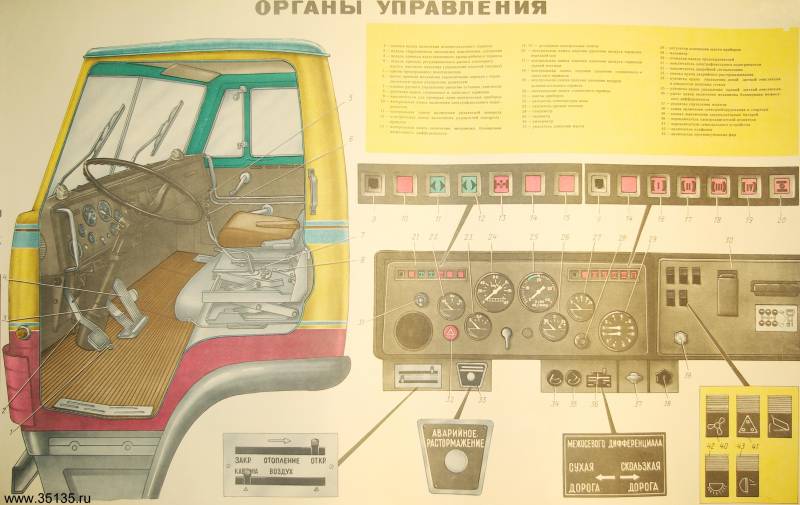 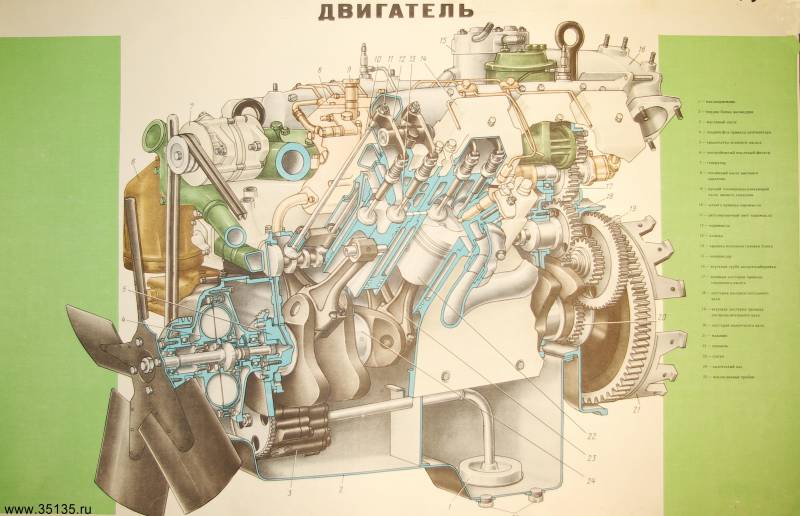 Imported cars expectedly outperformed Soviet prototypes in efficiency due to more advanced fuel equipment, but in terms of traction and dynamic capabilities, all competitors were approximately equal.

During the run, a promising 10-cylinder 260-horsepower diesel KamAZ-741 with a working volume of 13.56 liters was tested. This motor could easily stand on a 6×6 all-terrain vehicle, since according to the results of the tests, which ended in November 1976, it did not cause serious complaints.

In fact, only increased vibrations were observed (10-cylinder engines are more difficult to balance), due to which the roof of the cab was delaminated at the welding points, and the noticeably heavier front of the truck worn out the tires prematurely. The motor (due to its high power) required a new YaMZ-152 gearbox, gearboxes and even drive axle beams.

But the most negative role from the history of a 10-cylinder diesel engine was played by the low technological flexibility of the process at the new plant: there were simply no conditions for launching two motors into production at once. As a result, no one saw the 260-horsepower 10-cylinder KamAZ neither in the army nor in the civilian sphere.

The history of the appearance of an army truck from Naberezhnye Chelny is absolutely opposite to the birth of a classmate Ural-375/4320. The Miass vehicle was originally designed exclusively for the needs of the military at NAMI, but the KamAZ-4301 appeared as a product of the adaptation of civilian equipment for the army.

Considering the gigantic production capacity of the plant in Naberezhnye Chelny, the military KamAZ (from an economic point of view) outperformed the Urals. In addition, it is worth remembering that the Soviet Army was also armed with a lot of “road” KamAZ of the 5320 series – this seriously simplified the in-model unification of spare parts.

Initially, bonneted cars from Miass fell into motor dependence on KamAZ-740 diesel engines, since deliveries from Naberezhnye Chelny went on a leftover basis. Large production volumes meant that Naberezhnye Chelny would share products with other factories in the Soviet Union.

In accordance with this, Miass developed a whole family of Suha trucks, which were to become the successors of the 375/4320 series. The bonnet cabins of the new Urals were built on the basis of KAMAZ.

“Sushu” was adopted, but was not mass-produced. And at the end of the 90s, they were quietly taken out of the combat units.

As a result, since the mid-80s, it was KamAZ trucks that became the main vehicles, first of the Soviet, and later of the Russian Army.

The army KamAZ-4310 could be distinguished from civilian trucks by a higher landing, all single-wheel wheels and a shortened cargo platform. Naturally, all 4310 cars were painted in a monotone khaki.

With the coloring of KamAZ products, in general, an interesting story. Each cargo line originally had its own color scheme. The cabins of the KamAZ-5320 onboard trucks came off the assembly line in blue livery. KamAZ-5410 truck tractors were only red. And dump trucks 5511 are orange. Later, a light gray color scheme appeared, which confused the initially strict coloring system of the lineup.

In the first years of production, probably the most characteristic features of truck design appeared on all KamAZ trucks – angular aerodynamic shields near the headlights. These elements carried an important function, redistributing the air flow in such a way as not to excessively contaminate the sides of the cab. Deflectors during movement formed a narrowly directed stream of air, cutting off the streams of dirt flying on windows and doors.

KamAZ-4310 differed from civilian vehicles structurally – the presence of a two-stage transfer case with an interaxle differential and a 60 hp power take-off shaft. with. The center differential was an asymmetric planetary with a lock – all this made it possible to compensate for the inequality of the angular velocities of the wheels of different axles.

The army served both the basic 5-ton 4310 vehicles with shielded electrical equipment and a centralized tire inflation system, as well as the more common 7-ton KamAZ-43105. These trucks were deprived of winches and pumping, which lightened the car by 200 kilograms.

In fact, it was a military version of an agricultural all-wheel drive truck with a body extended up to 5.1 meters with a spare wheel inside. You can distinguish 43105 by the rectangular higher body curtain.

KamAZ-4410 was in the Soviet Army an all-terrain vehicle in the performance of a truck tractor, which at one time was tested and produced with active semi-trailers. At the very sunset of the USSR in 1989, the KamAZ-43101 with a 220-horsepower diesel engine, designed for 6 tons of cargo, entered the army.

Anti-KAMAZ sanctions of the West

With the beginning of the military campaign of the Soviet Union in Afghanistan, KamAZ trucks became one of the main characters on the roads of the mountainous country.

On the one hand, the trucks were distinguished by high power density, maneuverability and maneuverability, and on the other hand, by low mine resistance (a consequence of the cabover configuration) and the complete absence of even primitive armor.

The war in Afghanistan did not go unnoticed by the Western “colleagues” of the Kama Automobile Plant. The American company Ingersoll Rand has cut off the supply of components for the automatic line of the motor plant.

Forty years ago, our country was faced with the problem of international sanctions and forced import substitution.

Then, through the efforts of the USSR Academy of Sciences, it was possible to eliminate the failure in production on its own and to remove the question of technological dependence on potential opponents. 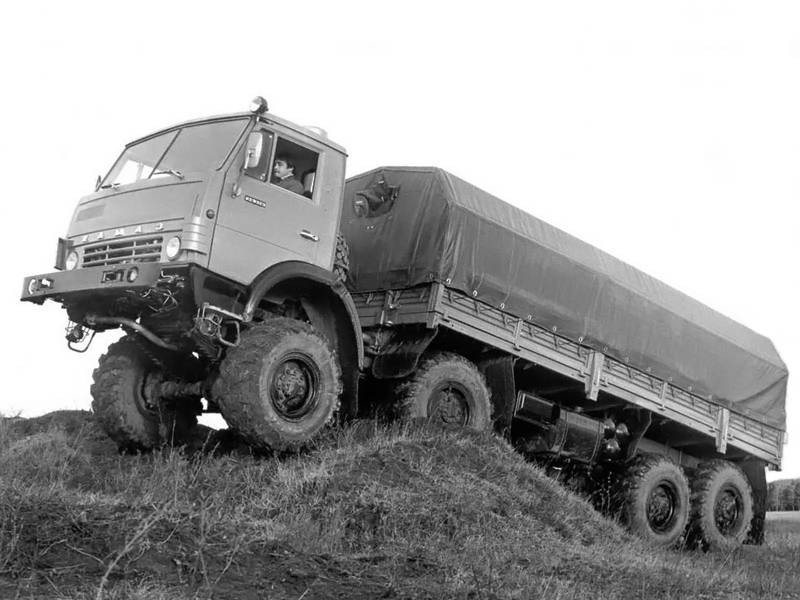 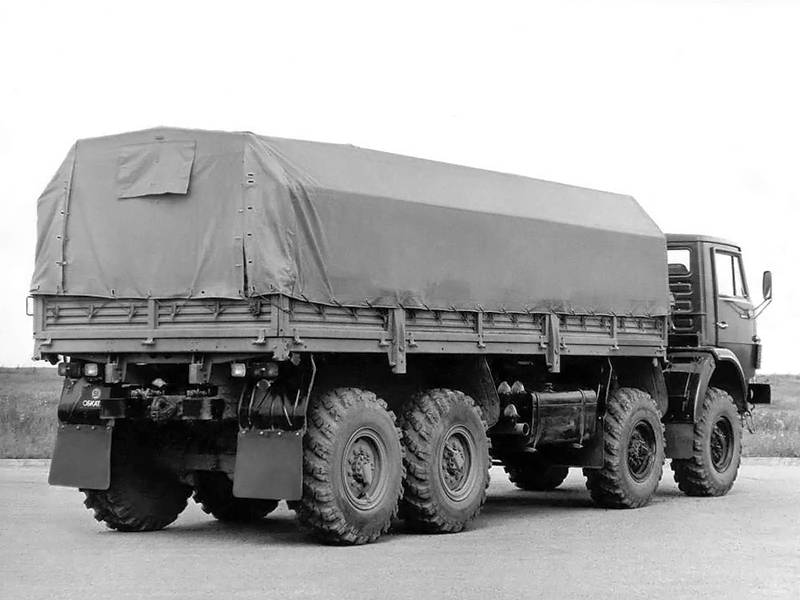 The first independent experience of the engineering headquarters of KamAZ was a vehicle with the E6310 index, developed within the framework of the “King” theme in the mid-80s. Source: autowp.ru

The basic principles of the above vehicles were laid down by the engineers of the Moscow ZIL. And the first independent work of the designers of KamAZ was the heavy machines E6310 and E6320 (ROC “King”).

The trucks had a wheel arrangement of 8×8 and for most units were unified with the younger three-axle models.

In 1985, the military tested new items, but were unhappy with the low power density, the lack of an independent suspension, a manual transmission and a number of minor flaws. Moreover, the testers noted not the best cross-country ability of a heavy vehicle – in a number of cases KamAZ 8×8 lost even to the Ural-4320.

In Naberezhnye Chelny, they were obviously embarrassed by the results of the tests and for several decades they forgot about four-axle trucks with such technical parameters.

The next independent program of KamAZ was the “Mustang” theme, which was born from the tactical and technical assignment of the Ministry of Defense on December 16, 1988.

The military demanded a family of 2, 3 and 4-axle trucks, as well as the introduction of a hydromechanical transmission. The development and testing of new military KamAZ trucks lasted a whole decade.