It is widely believed that the best environment for the use of laser weapons (LW) is outer space. On the one hand, this is logical: in space, laser radiation can propagate practically without interference caused by the atmosphere, weather conditions, natural and artificial obstacles. On the other hand, there are factors that significantly complicate the use of laser weapons in space.

Features of the operation of lasers in space

The first obstacle to the use of high-power lasers in outer space is their efficiency, which is up to 50% for the best products, the remaining 50% goes to heating the laser and its surrounding equipment.

Even in the atmosphere of the planet – on land, on water, under water and in the air, there are problems with the cooling of powerful lasers. Nevertheless, the possibilities for cooling equipment on the planet are much higher than in space, since in a vacuum the transfer of excess heat without loss of mass is possible only with the help of electromagnetic radiation.

On-water and underwater cooling of the LO is easiest to organize – it can be carried out with seawater. On the ground, you can use massive radiators with heat dissipation into the atmosphere. Aviation can use the oncoming air flow to cool the aircraft.

In the Soviet orbital combat laser “Skif”, which was planned to be launched into orbit by the super-heavy carrier rocket “Energia”, a gas-dynamic laser was to be used, the cooling of which would most likely be carried out by the ejection of a working fluid. In addition, the limited supply of the working fluid on board could hardly provide the possibility of long-term operation of the laser. 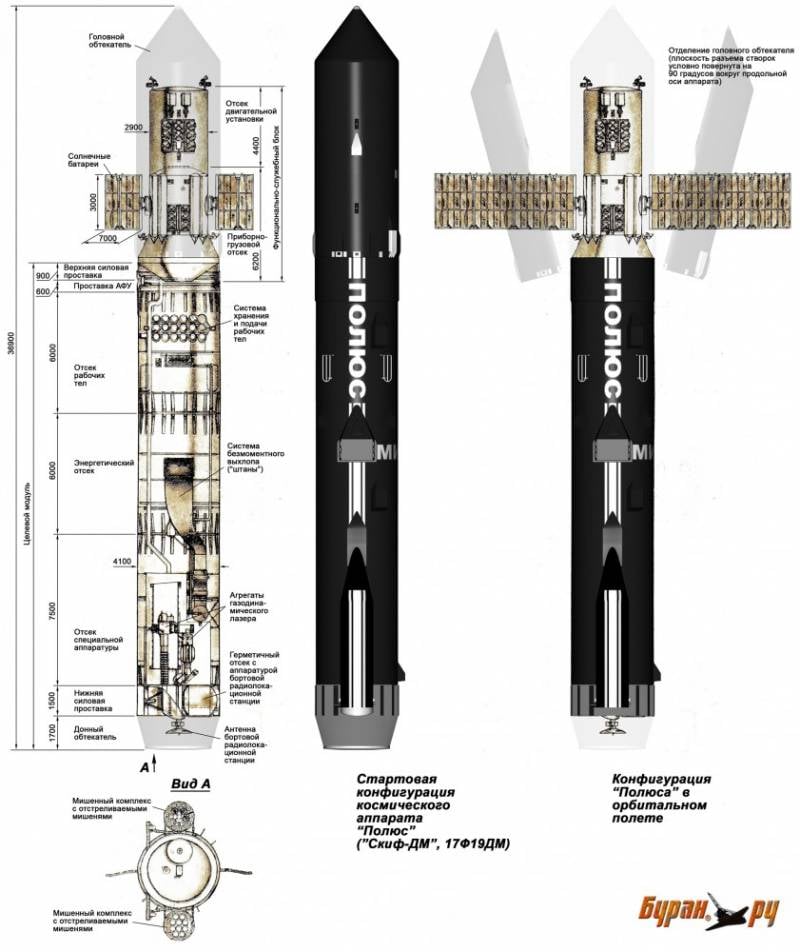 The second obstacle is the need to provide laser weapons with a powerful source of energy. A gas turbine or a diesel engine in space cannot be deployed; they need a lot of fuel and even more oxidizer, chemical lasers with their limited reserves of a working fluid are not the best choice for placement in space. Two options remain – to provide power to a solid-state / fiber / liquid laser, for which solar batteries with buffer accumulators or nuclear power plants (NPPs) can be used, or lasers with direct pumping by nuclear fission fragments (nuclear-pumped lasers) can be used. 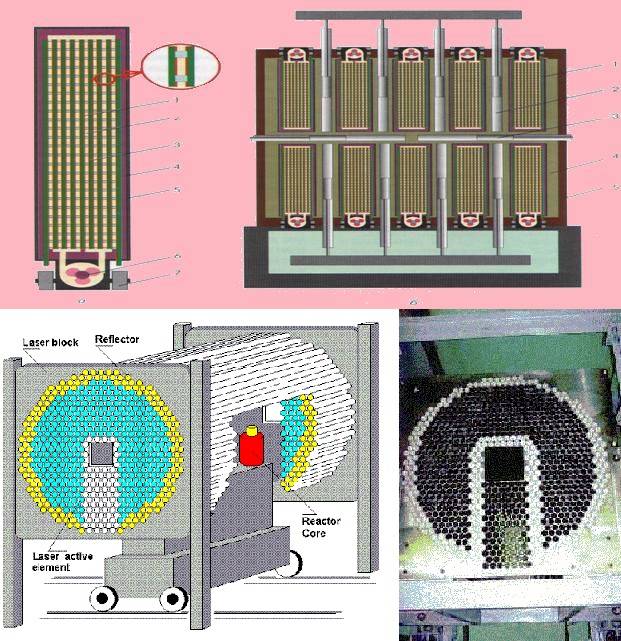 As part of the work carried out in the United States under the Boing YAL-1 program, a 14 megawatt laser was supposed to be used to destroy intercontinental ballistic missiles (ICBMs) at a distance of 600 kilometers. In fact, a power of about 1 megawatt was achieved, while training targets were hit at a distance of about 250 kilometers. Thus, a power of the order of 1 megawatt can be used as a baseline for space laser weapons capable, for example, of operating from a low reference orbit at targets on the Earth’s surface or at relatively distant targets in outer space (we are not considering an aircraft designed for illumination »Sensors).

With a laser efficiency of 50%, to obtain 1 MW of laser radiation, it is necessary to supply 2 MW of electrical energy to the laser (in fact, more, since it is still necessary to ensure the operation of auxiliary equipment and the cooling system). Is it possible to get such energy using solar panels? For example, solar panels installed on the International Space Station (ISS) generate between 84 and 120 kW of electricity. The dimensions of the solar panels required to obtain the indicated power can be easily estimated from the photographic images of the ISS. A design capable of powering a 1 MW laser would be enormous and would require minimal portability. 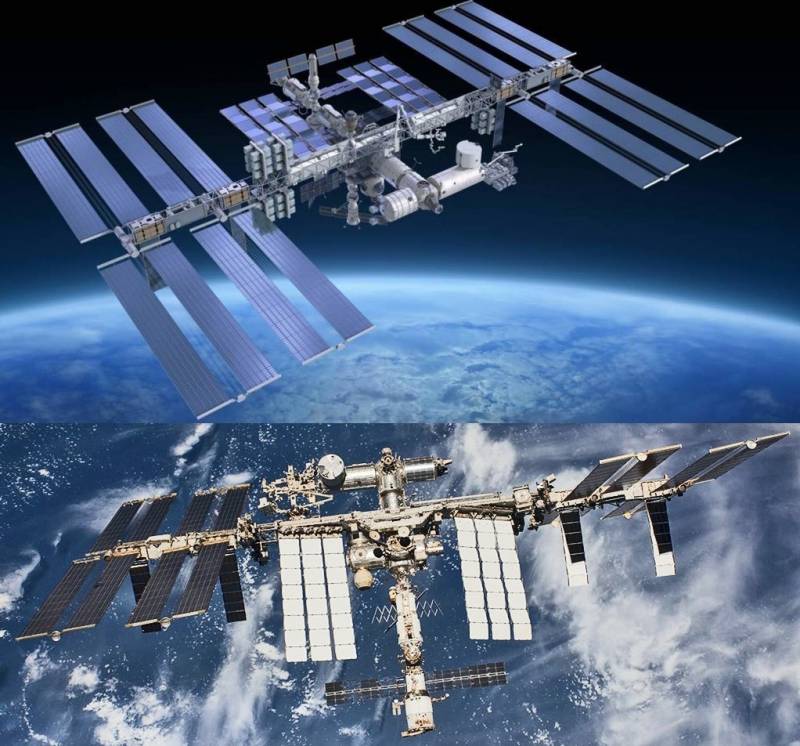 You can consider a battery assembly as a power source for a powerful laser on mobile carriers (in any case, it will be required as a buffer for solar batteries). The energy density of lithium batteries can reach 300 W * h / kg, that is, to provide a 1 MW laser with an efficiency of 50%, batteries weighing about 7 tons are needed for 1 hour of continuous operation with electricity. It would seem not so much? But taking into account the need to lay down supporting structures, accompanying electronics, devices for maintaining the temperature regime of batteries, the mass of the buffer battery will be approximately 14-15 tons. In addition, there will be problems with the operation of batteries in conditions of temperature extremes and space vacuum – a significant part of the energy will be “consumed” to ensure the life of the batteries themselves. Worst of all, the failure of one battery cell can lead to failure, or even an explosion, of the entire battery of batteries, along with the laser and the carrier spacecraft.

The use of more reliable energy storage devices, convenient from the point of view of their operation in space, will most likely lead to an even greater increase in the mass and dimensions of the structure due to their lower energy density in terms of W * h / kg.

Nevertheless, if we do not impose requirements on laser weapons for many hours of work, but use LRs to solve special problems that arise once every several days and require a laser operation duration of no more than five minutes, then this will entail a corresponding simplification of the battery. … The batteries can be recharged from solar panels, the size of which will be one of the factors limiting the frequency of use of laser weapons.

A more radical solution is to use a nuclear power plant. Currently, radioisotope thermoelectric generators (RTGs) are used on spacecraft. Their advantage is the relative simplicity of the design, the disadvantage is low electrical power, which is, at best, several hundred watts.

A prototype of a promising RTG Kilopower is being tested in the USA, in which Uranium-235 is used as fuel, sodium heat pipes are used to remove heat, and the conversion of heat into electricity is carried out using a Stirling engine. In the prototype of the Kilopower reactor with a capacity of 1 kilowatt, a sufficiently high efficiency of about 30% has been achieved. The final sample of the Kilopower nuclear reactor should continuously produce 10 kilowatts of electricity for 10 years. 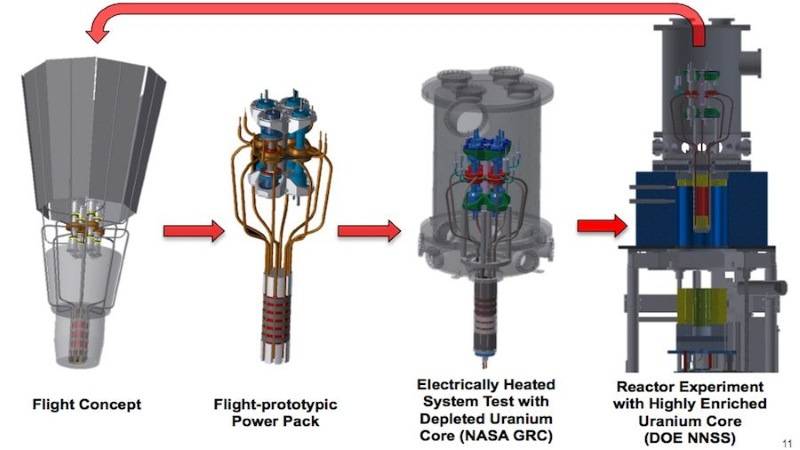 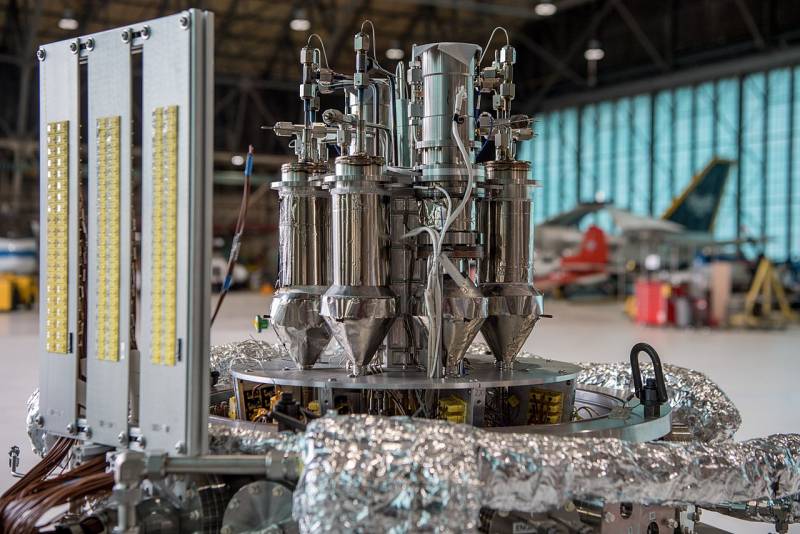 The power supply circuit of the LR with one or two Kilopower reactors and a buffer energy storage device can already be operational, providing periodic operation of a 1 MW laser in combat mode for about five minutes, once every several days, through a buffer battery.

The concept of a transport and energy module with a nuclear power plant. The need to cool the nuclear power plant and protect the crew / equipment from radioactive radiation dictates its requirements for the size of the structure

As in the case of cooling a powerful laser weapon, the use of a nuclear power plant of one type or another also puts forward increased cooling requirements. Refrigerators-radiators are one of the most significant in terms of mass and dimensions, elements of a power plant, the proportion of their mass, depending on the type and power of the nuclear power plant, can range from 30% to 70%.

Cooling requirements can be reduced by reducing the frequency and duration of the laser weapon operation, and by using relatively low-power RTG-type NPPs, recharging the buffer energy storage.

Of special note is the placement of nuclear-pumped lasers in orbit, which do not require external sources of electricity, since the laser is pumped directly by the products of a nuclear reaction. On the one hand, nuclear-pumped lasers will also require massive cooling systems, on the other hand, the scheme for direct conversion of nuclear energy into laser radiation may be simpler than with an intermediate conversion of heat released by a nuclear reactor into electrical energy, which will entail a corresponding reduction in size and weight. products.

Thus, the absence of an atmosphere that prevents the propagation of laser radiation on Earth significantly complicates the design of space laser weapons, primarily in terms of cooling systems. Providing space laser weapons with electricity is not much less of a problem.

It can be assumed that at the first stage, approximately in the thirties of the XXI century, a laser weapon will appear in space, capable of functioning for a limited time – on the order of several minutes, with the need for subsequent recharging of energy storage units for a sufficiently long period of several days.

Thus, in the near future, there is no need to talk about any massive use of laser weapons “against hundreds of ballistic missiles”. Laser weapons with advanced capabilities will appear no earlier than nuclear power plants of the megawatt class will be created and tested. And the cost of spacecraft of this class is difficult to predict. In addition, if we talk about military operations in space, then there are technical and tactical solutions that can largely reduce the efficiency of laser weapons in space.

Nevertheless, laser weapons, even those limited in terms of continuous operation time and frequency of use, can become an essential tool for warfare in space and from space.