Weapons and firms. It happens, and very often, that the desire to do “what is best” turns against the one who wished, and in the end it only turns out worse. This was the case, for example, with the Smith & Wesson lightweight carbine, developed in the United States at the very beginning of 1939. Their weapons turned out to be interesting, outwardly even beautiful, but they were never accepted into service. Why? And here we will tell about it. 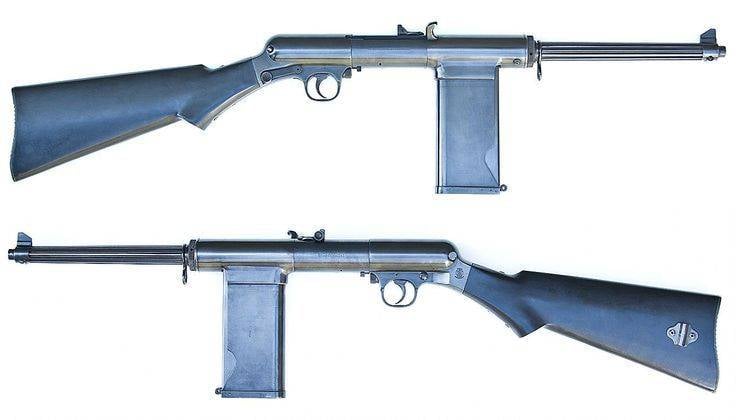 The same: left and right view

And it so happened that the British government at the beginning of 1939 turned to the firm “Smith and Wesson” with a request to create for the British army something like a light carbine for the pistol cartridge 9 × 19 mm Parabellum, suitable for mass use. The British did not stint and allocated one million dollars for the production of the carbine soon after receiving its prototypes, which were assembled on the basis of a patent application dated June 28, 1939. However, tests of the supplied samples showed that they had a serious problem. The fact is that in England these cartridges received slightly different equipment than in the United States. As a result, when firing a British cartridge in the chamber, pressure was created for which American carbines were not designed. The result is a breakdown of the receiver after the first thousand shots. Naturally, the British government immediately demanded that the weapon be modernized so that it could withstand at least 5000 rounds.

The company naturally responded to this requirement and reinforced the receiver with an additional outer casing. Such carbines with a reinforced receiver were called Mk. II, and the original version was accordingly named Mk. I. Despite the amendment, the British government decided to terminate the contract for the production of these carbines, having received only 60 prototypes and 950 serial ones, of which 750 belonged to the Mk. I, and about 200 – to the Mk. II. Five samples were kept for museums, including the Tower, and the rest were disposed of. Well, the S&W firm almost went bankrupt due to a failure with this carbine.

Mk. I with belt. The right-side fuse, the bolt handle and the magazine located in the receiver are clearly visible

Despite the setback, Smith & Wesson continued production, and the carbine was tested by the US Army at the Aberdeen Proving Grounds. However, the army rejected this design, primarily because it was designed to use a non-standard cartridge. There was a discussion about its possible modernization so that the carbine could conduct automatic fire. Words are one thing, but production is quite another, and it was stopped after 1,227 carbines were made. One of the reasons for the stop was that the weapons were considered unsuitable for sale to civilians under the National Firearms Act. A total of 217 units remained at the Smith & Wesson plant until its status was cleared with the Bureau of Alcohol, Tobacco, Firearms and Explosives in 1975.

Firearms collectors subsequently acquired 137 Mk. I and 80 Mk. II. However, there seem to be documents that 4300 of these carbines arrived in … Sweden and were hidden there in the warehouse of the Ministry of Defense. Apparently, the Swedish government purchased them in March 1941, along with 6.5 million 9mm rounds. For some unknown reason, these light carbines were never given to the troops, and they are still there in the boxes in which they were delivered. Along with them, the Swedish government also purchased 500 Thompson M1921 submachine guns (model 1928) and 2.3 million .45ACP rounds for them. Since .45ACP cartridges were never produced in Sweden, the weapons were quickly transferred to low priority units. Then, in the 50s, most of these submachine guns just disappeared and there are rumors that they were sold to Israel.

Mk. II with a belt, the safety lock is clearly visible

What exactly were these pistol-chambered carbines bad for? Yes to everyone, because the company, surprisingly, tried to make them “as good as possible.” It seems that everything is simple there: a free breechblock, shooting is in progress, fire is fired from an open breechblock and for some reason only single shots. In Mk.1, the striker is movable, and comes forward from the shutter mirror only when it has taken the extreme forward position under the influence of a special lever. This was already a clear overkill, and on the Mk.2 model, the drummer was made fixed in the bolt. 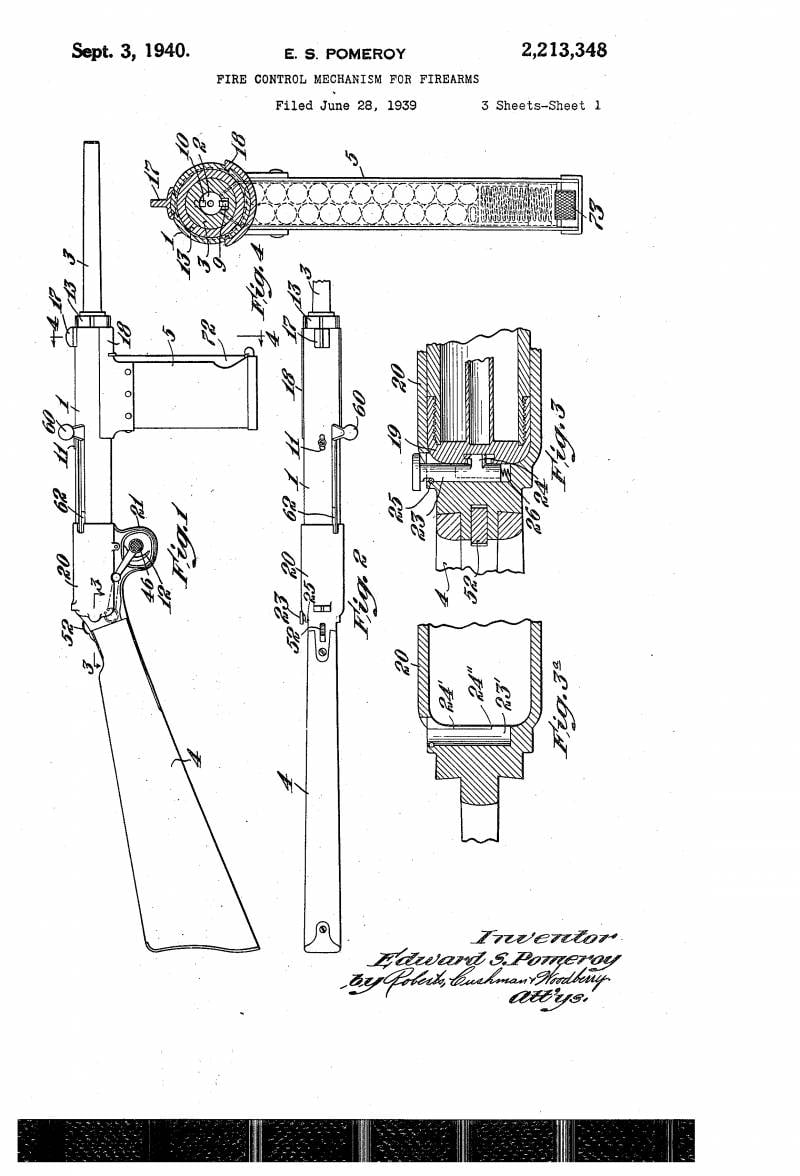 Patent for the carbine “Smith and Wesson” dated September 3, 1940 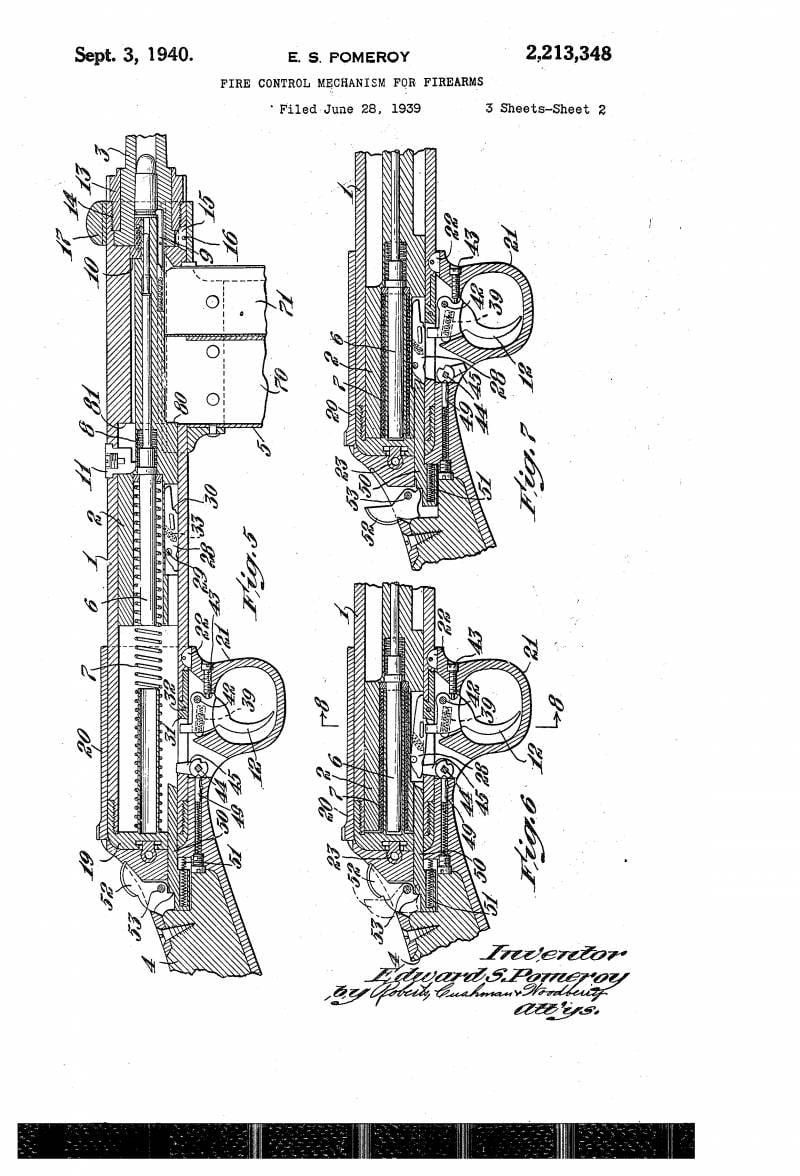 “Mechanics” of the carbine “Smith and Wesson” under the patent dated September 3, 1940 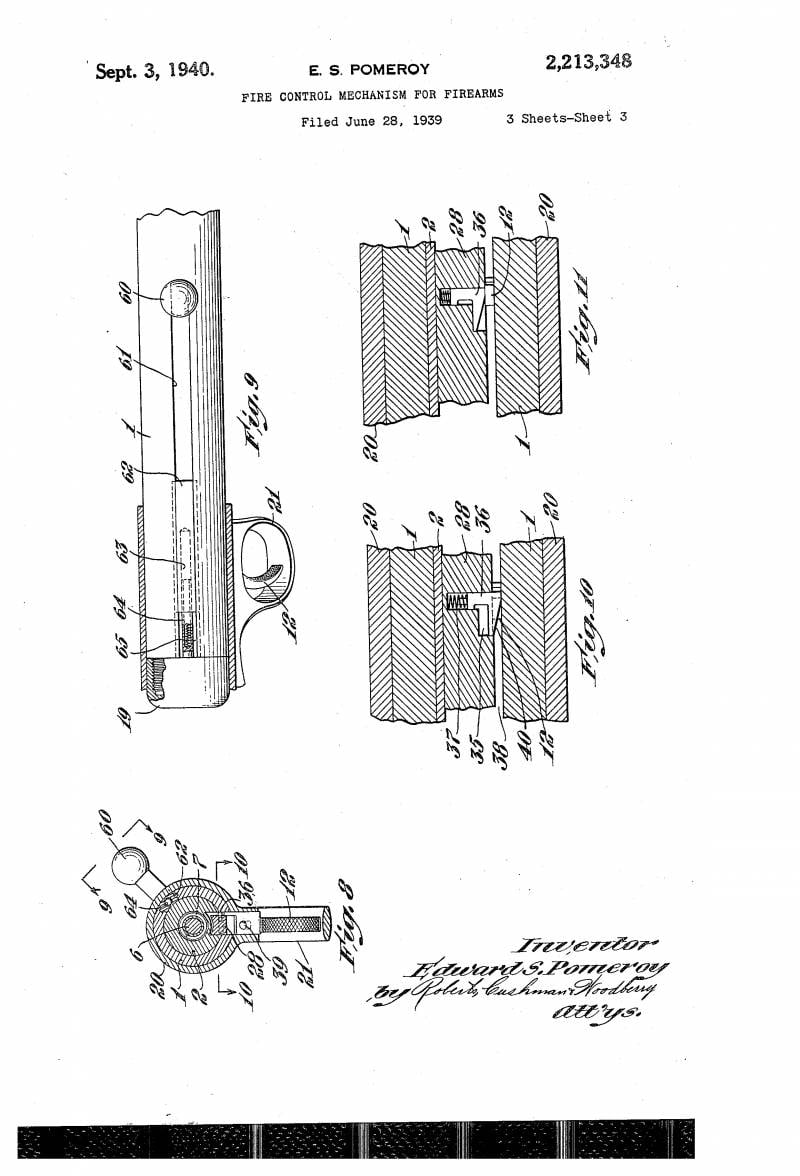 All sorts of small clever devices described in the patent, which in the end only only complicated the design of this weapon

The Mk.1 fuse was in the form of a lever, which was placed to the right and behind the trigger so that when it was moved to the forward position, it would block it. In Mk.2, instead of a lever on the receiver, they installed an original cylindrical clutch, something like a “sleeve”, on which there was a horizontal slot. The cocking handle, which was rigidly attached to the bolt, passed through it. By turning this clutch, which has an external notch, the slot was removed from the path of the handle, and the bolt was locked in the front or rear position.

But, perhaps, the most unusual solution in the design of this carbine was its receiver for the store and the way in which the spent cartridges were ejected. The receiver was installed under the barrel, as it should be, but made it twice as wide as the store itself. The fact is that it consisted of two compartments at once, front and rear, but only the front was actually the receiver. It was open in the front and just in the front, not at the bottom, and a 20-round box magazine was inserted into it. The magazine latch was placed at the bottom of the receiver, on both sides of which cutouts were prudently made to make it easier to remove it. But the back of the receiver from below was open and served as a channel through which spent cartridges were thrown out!

When firing, the shutter rolled back, carried the cartridge case by the store, and the ejector threw it down into a long channel located behind the store, from which it then fell to the ground. The solution was innovative and original. It is clear that in this way the sleeve could not hit the shooter or his neighbor in the eye, in the sleeve or behind the collar. But, on the other hand, such a technical solution both complicated the weapon and made it heavier, albeit not much, and most importantly, created great difficulties in eliminating delays in firing due to the fact that spent cartridges, it happened, simply clogged this channel.

And this happened because many shooters used to push the magazine into the ground when firing. It is convenient, they are accustomed to this manner, it increased the stability of the weapon when firing. But in this case, it was impossible to shoot like that, since the spent cartridges accumulated in the magazine receiver, which again could lead to delays in firing.

Scheme MK. I. Numerous “grooves” on the barrel are clearly visible, facilitating it and at the same time serving to cool it. But the low-tech solution for wartime weapons was obvious

The design of the sights was also clearly overcomplicated. It had an adjustable rear sight that allowed a smooth setting of the firing range from 50 to 400 yards. Initially, the carbine had a wooden buttstock with a semi-pistol neck, but the British equipped some of their carbines with a metal pistol grip and a removable buttstock, developed at an arms factory in the city of Enfield. 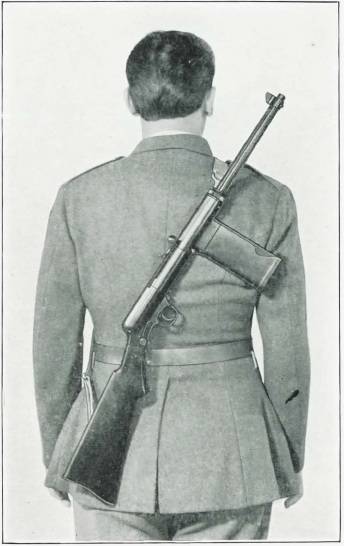 Carrying behind the back

The manufacture of carbine parts was also difficult and expensive. All parts were milled and blued. In addition, the barrel was too original. Twelve longitudinal grooves were made on it. This solution provided the barrel with good cooling and increased strength, but made it extremely low-tech and expensive to manufacture. 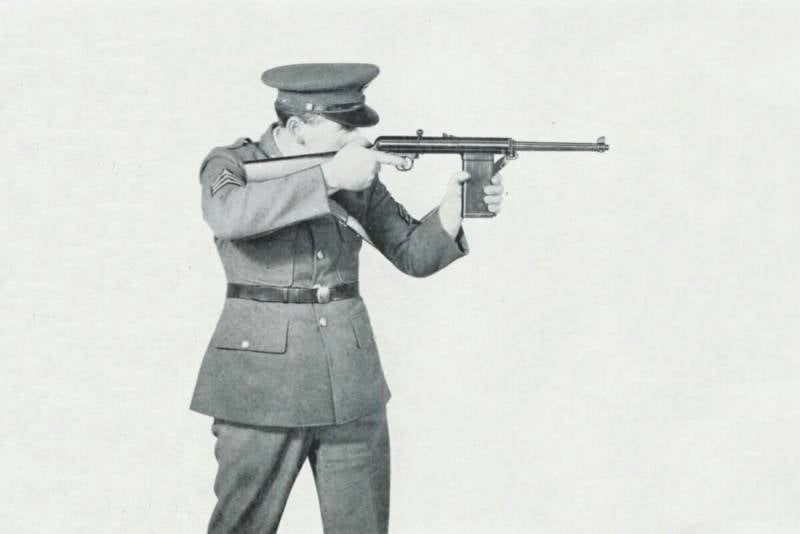 This is how it should have been held while firing.

That is, outwardly, the weapon turned out to be beautiful and elegant, but terribly low-tech, complex and expensive to manufacture, and not very convenient to use. The same “Thompson” was both cheaper and much more efficient …