The LAD light machine gun can be classified as a unique example of Soviet small arms. A new light machine gun chambered for a pistol cartridge quite successfully passed field tests in 1943, showing good results. Despite the good test results, the LAD was never accepted into service.

The very fact of the creation of the LAD light machine gun stemmed from the nature of the Second World War. The Red Army was losing to the Wehrmacht in this component. All tactics of the German infantry were based on the use of a single MG-34/42 machine gun, around which the entire squad was built. In fact, the rest of the squad played the role of carriers of machine gun ammunition. The MG-34/42, thanks to its belt feed and the ability to quickly change barrels, provided a very high density of fire. It is also known for its high rate of fire up to 1,200 and even 1,500 rounds per minute in the MG-42 model. It is no coincidence that the machine gun even received the nickname “Hitler’s circular saw.”

It is with the use of rapid-fire machine guns with a high density of fire that the widespread myth is connected that the German infantrymen were without exception armed with automatic weapons. The DP-27 light machine gun could not compete with the German MG, and the Maxim easel machine guns were not the top of engineering at that time. This was superimposed on the huge losses of small arms by the Red Army. In 1941 alone, about 130 thousand DP machine guns were lost, and in 1942 the troops lost another 76 thousand light machine guns. Such losses led to the fact that already in the states of wartime divisions, the number of light machine guns in a company in comparison with the pre-war one fell twice at once. Under these conditions, the army was in dire need of a belt-fed machine gun that could be easily mastered and put into mass production.

Machine gun LAD and its features

The idea of ​​creating a light machine gun LAD belongs to the employees of the NIPVSO, engineer-captain V.F. Lyutoy, N.M. Afanasyev and Major Engineer V.S. Deikin. Officially, the weapon was called “a light belt-fed machine gun chambered for the TT pistol cartridge.” Abbreviated name – LAD (according to the first letters of the names of the weapon designers). The model was developed taking into account the already accumulated experience of combat operations. In particular, it was taken into account that a significant part of the decisive phases of the battle takes place at short distances, which do not exceed 300-400 meters. At this range, the lethal force of the TT pistol cartridge with an initial speed of about 600 m / s would be sufficient. 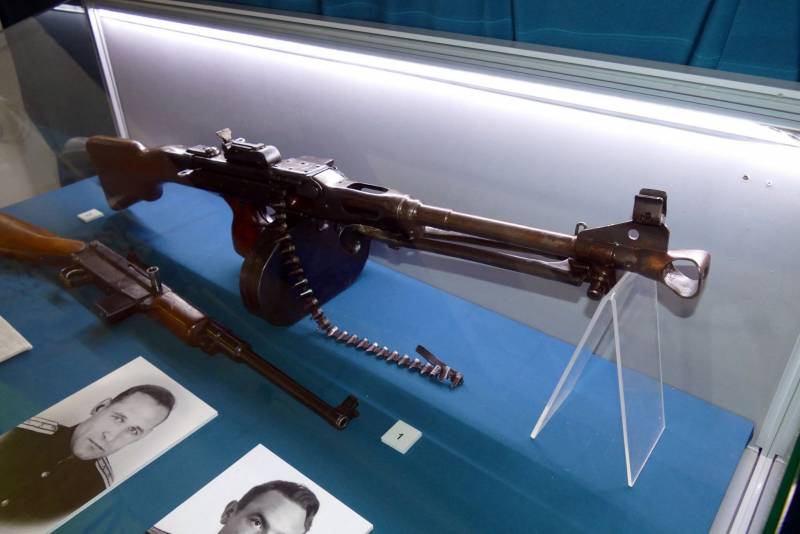 At the same time, the developers of the new machine gun rightly noted that the existing PPSh submachine guns and DP light machine guns are not able to provide the required high density of fire due to the store power implemented in them. Separately, it was pointed out that their ammunition was limited, as well as the inability of submachine guns for prolonged firing. Also highlighted was the possibility of using the new LAD machine gun for arming paratroopers, partisans and calculations of artillery guns. For artillerymen, weapons could become very useful, since often the guns were installed for direct fire, often even in front of the infantry positions. In this regard, the presence of light machine guns with a good fire density on the battery could become a serious help in the fight against the advancing enemy infantry.

The new LAD machine gun chambered for the 7.62×25 mm pistol cartridge was structurally a more maneuverable and lightweight automatic weapon than the standard Soviet DP light machine gun. At the same time, all the savings in the weight of the weapon achieved were directed by the designers, first of all, to increase the wearable ammunition. The main tactical and technical characteristics of the weapon were as follows: length – 956 mm, weight with bipod (without a box with cartridges) – 5.3 kg, together with a box for 150 cartridges, the weight of the weapon increased to 7.63 kg. Rate of fire – 600 rounds per minute (all performance characteristics from the site kalashnikov.media).

The weapon was designed for the use of TT pistol cartridges, loaded in metal strips, designed for 150 and 300 rounds. A small box with a tape could be attached to a light machine gun for firing “on the move”. In addition, the second number of the calculation carried a special knapsack pack, which contained two boxes with ribbons for 600 rounds. Shooting from them was carried out without joining the weapon. 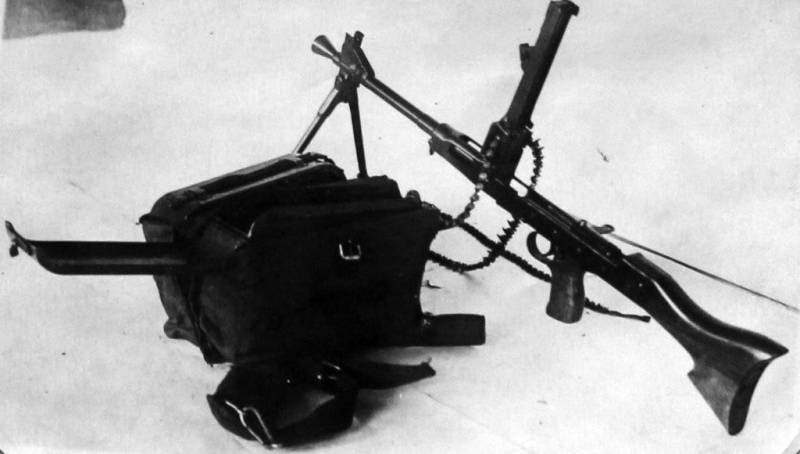 The LAD machine gun was designed as simple and technologically advanced as possible, made of 1.5 mm thick sheet steel. The main operations in the manufacture of weapons were to be stamping, riveting and welding. The automation of the new machine gun was based on a combination of two well-known principles – the recoil of the free breechblock and the gas outlet scheme, when additional acceleration occurred with powder gases. There was no fire translator on the weapon. The cartridges were fed directly from the tape, the feed mechanism of which was placed on the receiver cover.

Structurally, a light machine gun consisted of four parts: a barrel and a receiver, a receiver cover with a tape feed mechanism, sighting devices, a weapon control handle and a butt; shutter; bolt guide with a reciprocating mainspring; boxes with a machine-gun belt. The barrel of the machine gun was equipped with a muzzle brake. Another version of the machine gun had a flame arrester-bell, as in the DP.

How the LAD light machine gun showed itself in trials

The LAD light machine gun was produced in duplicate. One of the assembled machine guns was tested in 1943 at the NIPSVO – the Research and Development Range of Small Arms of the GRAU (Main Artillery Directorate). It is also known as the Shchurovsky test site. Small arms historian Andrei Ulanov wrote about the results of testing a unique machine gun in the publication kalashnikov.media.

On trials, the new machine gun performed well. The calculations of the creators of the weapon were confirmed. The LAD had very good reliability. Only five delays were recorded for 1,750 shots fired (after the weapon was immersed in a swamp, special dusting with cement dust and other “bullying” envisaged by the tests). Shooting for accuracy demonstrated that the LAD light machine gun is superior in this indicator to the PPS submachine gun at distances of 100 and 300 meters, and at this firing range is practically equivalent to the DP light machine gun chambered for the 7.62 × 54 mm R rifle cartridge. 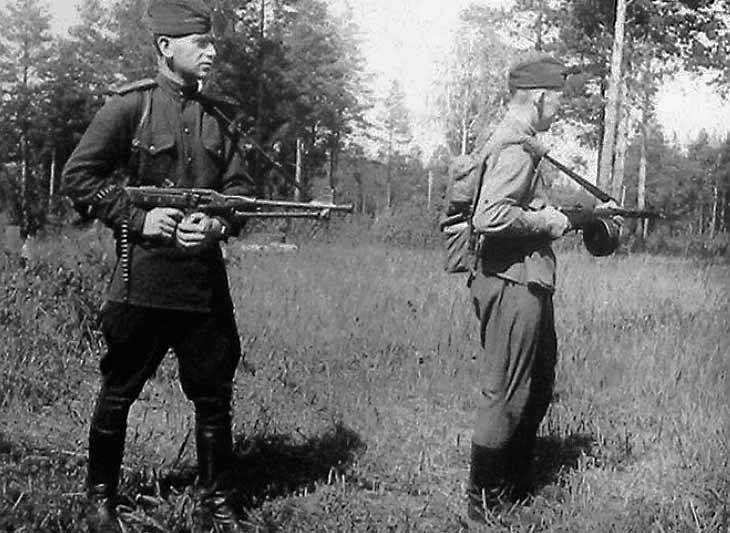 In addition, a comparative shooting from the LAD and PPSh was carried out. Shooting was carried out at several groups of targets at different distances and directions with imitation of combat conditions. During the tests, not only the advancing target of the shooters and the enemy machine gun covering its offensive with fire were simulated, but also a bypass maneuver, when the shooter had to sharply transfer the fire to other targets. Tests have shown that a shooter armed with a LAD machine gun fired his 600 rounds much faster than a fighter armed with a PPSh. At the same time, the machine gunner achieved more hits – 161 versus 112 for the submachine gun.

The report compiled based on the results of the tests carried out indicated: the simplest calculations show that when one LAD machine gun is used as part of a rifle squad, the squad’s firepower at distances up to 500 meters almost doubles. The final conclusion based on the test results at the NIPSVO test site said that the new light machine gun demonstrated satisfactory operational and combat qualities. It was recommended, after the modification of the weapon, to release a series of LAD machine guns for wider range, as well as military tests of the novelty. However, this recommendation has not been implemented.

Why LAD was not accepted into service

In the conclusion of the commission, based on the results of field tests at the NIPSVO, it was indicated:

“one. In terms of operational and combat properties, as well as reliability of operation, the machine gun demonstrated satisfactory results.

2. Due to the low power of the existing pistol cartridge TT 7.62×25 mm, which leads to a decrease in the combat properties of the machine gun, it is inappropriate to develop this type of weapon, which is inferior in maneuverability to the already existing submachine guns, in the future. “ 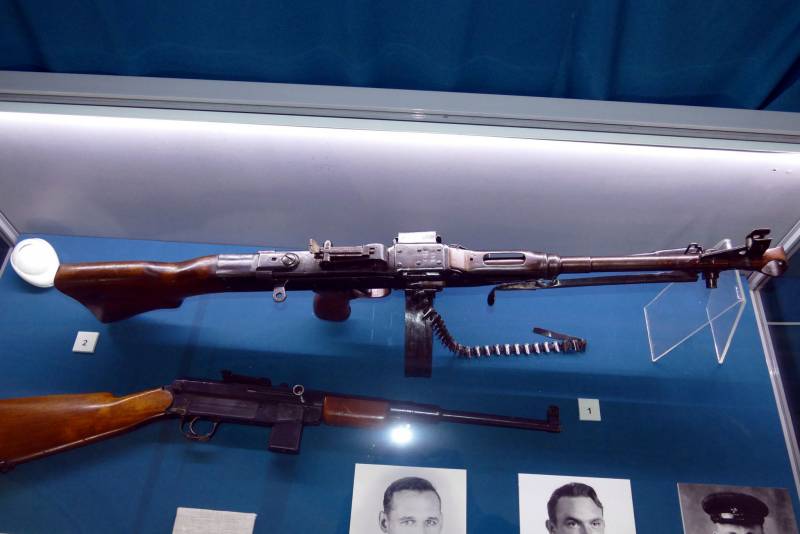 The commission came to a similar conclusion, comparing the LAD with the already well-known serial submachine guns. Which, on the one hand, looked fair, but on the other it did not. Formally, according to all the main features, the LAD was precisely a light machine gun, so it would be more logical to compare the weapon with them. So, the model of the designer Vasily Fedorovich Lyutoy had a number of obvious advantages over all the Soviet handbrakes available at that time, with the exception of a small effective firing range. The latter was an invariable attribute of the use of the low-power TT pistol cartridge. The LAD could not compete with light machine guns chambered for a rifle cartridge 7.62×54 mm either in terms of effective range of destruction of targets on the battlefield, or in terms of penetrating power of ammunition, which was also very important.

The LAD turned out to be an intermediate solution, which was between the existing and mass-produced industrial submachine guns and the DP-27 light machine gun. In fact, the weapon could be classified as heavy submachine guns with increased combat capabilities, but no more. It was considered inexpedient to introduce new niche small arms into production during the war. This was also influenced by the completion of the development of the first domestic intermediate cartridge 7.62×39 mm, model 1943. This ammunition provided the required compromise between the weight of the weapon and the requirements of combat effectiveness, including the firing range. With the advent of this cartridge, the disappearance of submachine guns from the battlefield, as well as new models of automatic weapons chambered for a pistol cartridge, was only a matter of time.