Site of open-hearth furnaces of the Ural Tank Plant No. 183 in Nizhny Tagil. Source: waralbum.ru

It is difficult to overestimate the production of high-quality steel for the military-industrial complex in war conditions. This is one of the most important factors in the success of armies on the battlefield.

As you know, Krupp’s metallurgists were among the first to learn how to produce high-quality weapons-grade steel.

The Germans adopted the Thomas manufacturing process at the end of the 19th century. This method of steelmaking made it possible to remove phosphorus impurities from the ore, which automatically increased the quality of the product. High-quality armor and weapons steel during the First World War often ensured the superiority of the Germans on the battlefield.

To organize such a production, new refractory materials were required, which lined the inner surfaces of the furnaces. The Germans used the latest magnesite refractories for their time, withstanding temperatures of more than 2000 degrees. Such substances of higher refractoriness are based on magnesium oxides with small admixtures of aluminum oxides.

At the beginning of the 20th century, countries with technologies for the mass production of magnesite refractories could afford to produce high-quality armor and gun barrels. This can be compared to a strategic advantage. 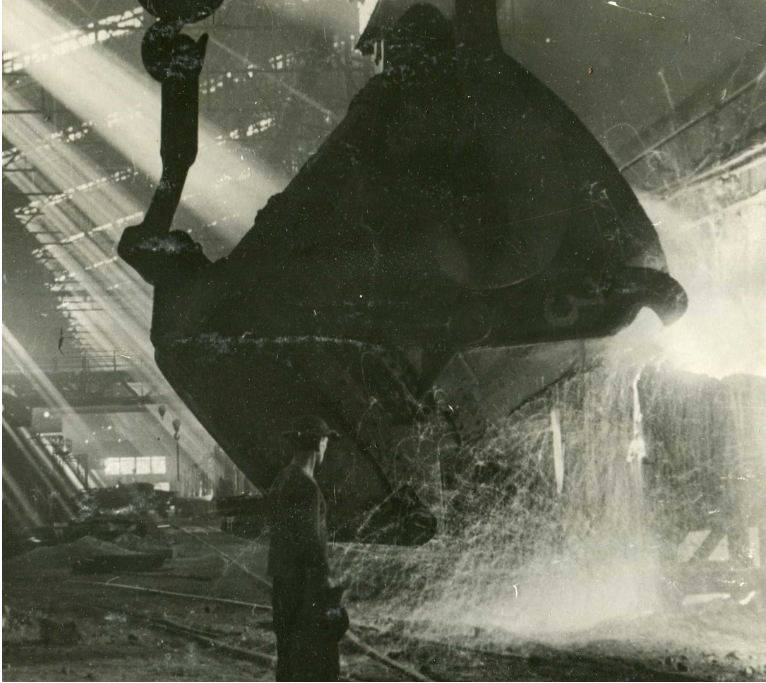 By the way, technologies and sites for the production of magnesite refractories first appeared in Russia back in 1900.

Satka magnesite refractory brick in 1905 was awarded a gold medal at the World Industrial Exhibition in Liege. It was produced near Chelyabinsk in the city of Satka, where a unique magnesite deposit was located.

The periclase mineral, from which the refractories were made at the factory, was of high quality and did not require additional enrichment. As a result, the magnesite refractory from Satka was superior to analogs from Greece and Austria.

Despite the quite high-quality magnesite bricks from Satka, until the 30s, the main refractories of Soviet metallurgists were dinas materials from clay. Naturally, getting a high temperature for smelting weapons-grade steel did not work out – the lining of the open-hearth interior crumbled and required extraordinary repairs.

There was not enough Satka brick, and in the post-revolutionary period, the main production technologies were lost.

At the same time, the Europeans went ahead – for example, the Austrian Radex magnesite was distinguished by excellent fire resistance.

The Soviet Union purchased this material. But it was impossible to get an analogue without a secret of production. This problem was taken up by a graduate of the Moscow State Technical University. N.E. Bauman Alexey Petrovich Panarin. At the Magnet plant (formerly the Satka Combine) in 1933 he headed the Central Plant Laboratory. And five years later, he launched mass production of periclase-chromite or chromomagnesite refractories for open-hearth furnaces.

At the Zlatoust Metallurgical Plant and the Moscow Hammer and Sickle, Panarin’s refractory replaced the outdated dinas. 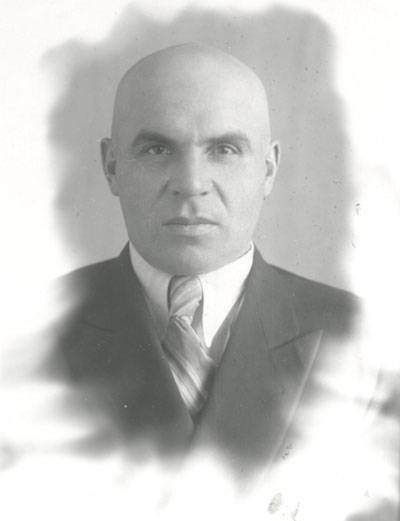 The technology, which had been developed in the laboratory of “Magnezit” for several years, consisted in a special composition and particle size.

Previously, the plant produced conventional chrome-magnesite bricks, consisting of magnesite and chromium iron ore, in a 50/50 ratio. The secret revealed by Panarin’s group was as follows:

“If we add chromite ore in coarse granulometric grains with a minimum content of fractions less than 0.5 mm to an ordinary magnesite charge, then even with a 10% addition of such ore, the thermal stability of the brick increases sharply.

As the addition of chromite ore of coarse granulometry increases, the stability of the brick grows and reaches a maximum at a certain ratio of components. “

Chromite for the new refractory was taken at the Saranovskoye mine, and periclase was continued to be mined at Satka.

At the Kirovograd Copper Smelting Plant, chromium-magnesite refractory in the roof of a reverberatory furnace withstood temperatures up to 1550 degrees for 151 days. Previously, refractories in such furnaces had to be changed every 20–30 days.

By 1941, the production of large refractories was mastered, which made it possible to use the materials in large steel-making furnaces at temperatures up to 1800 degrees. An important contribution to this was made by the technical director of “Magnezit” Alexander Frenkel, who developed a new method of attaching the refractory material to the roofs of the furnaces.

At the end of 1941, the metallurgists of Magnitka did the previously unthinkable – for the first time in history, they mastered the smelting of armor steel for T-34 tanks in the main heavy open-hearth furnaces.

The main supplier of refractories for such an important process was Satka “Magnezit”. It is unnecessary to talk about the difficulties of wartime, when a third of the factory workers were called to the front, and the state demanded that the plan be overfulfilled. Nevertheless, the plant was doing its job, and Panarin in 1943

was awarded the Stalin Prize.

In 1944, this metallurgist-researcher will develop a technology for the production of high-quality magnesite powder “Extra”. This semi-finished product was used to prepare a pressed refractory used in the especially important production of armored steel in electric furnaces. The temperature limit for such refractories reached 2000 degrees. 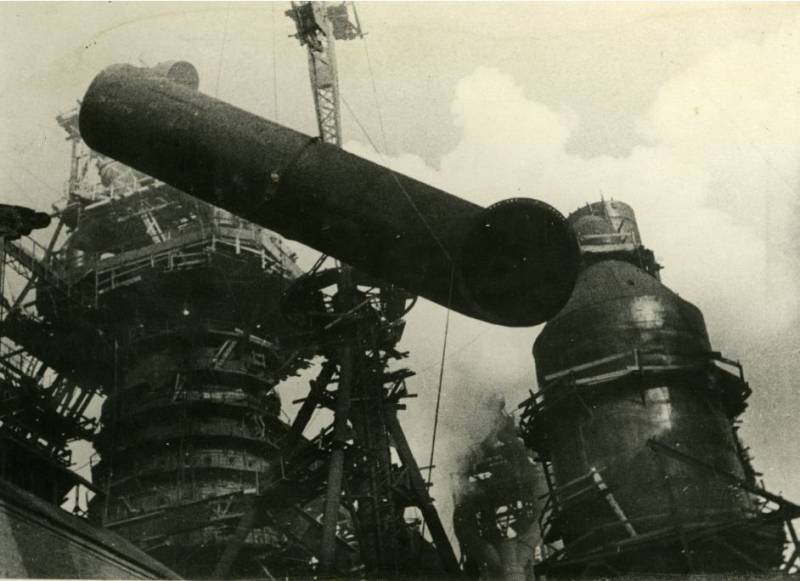 Construction of a complex of the Komsomol blast furnace No. 6 at the Magnitogorsk Metallurgical Plant in 1943. Source: m.gubernator74.ru

But one should not assume that the example of the generally successful Magnezit plant extended to the entire refractory industry of the Soviet Union.

A particularly difficult situation developed in the Urals, where practically all the country’s tank building was evacuated in 1941-1942.

For example, in Magnitka, the Dinas and Fireclay Plant produced 65–70 thousand tons of bricks per year. This was not enough even for their own needs, not to mention supplies to other enterprises.

The first difficulties arose when tank factories began to build their own heating and thermal furnaces. The Ural metallurgy already barely had enough refractories, and then the hull production of tank factories required high-quality materials for lining the furnaces.

There was no talk of any chromomagnesite refractories here – this material was in short supply, and even exported in exchange for American Lend-Lease. At least this is mentioned in a number of sources. Ural historians write that Panarin’s expensive chromomagnesite could go abroad in exchange for scarce ferroalloys for tank armor. But there is no direct evidence of this yet. 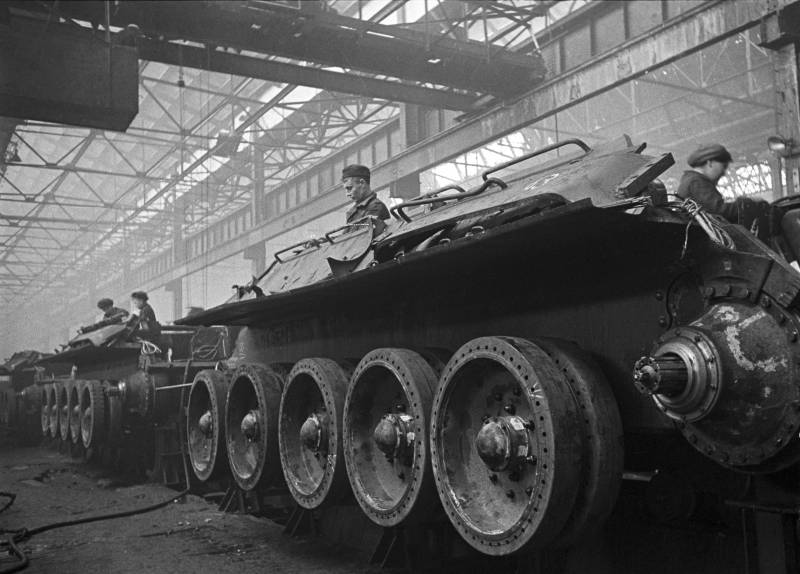 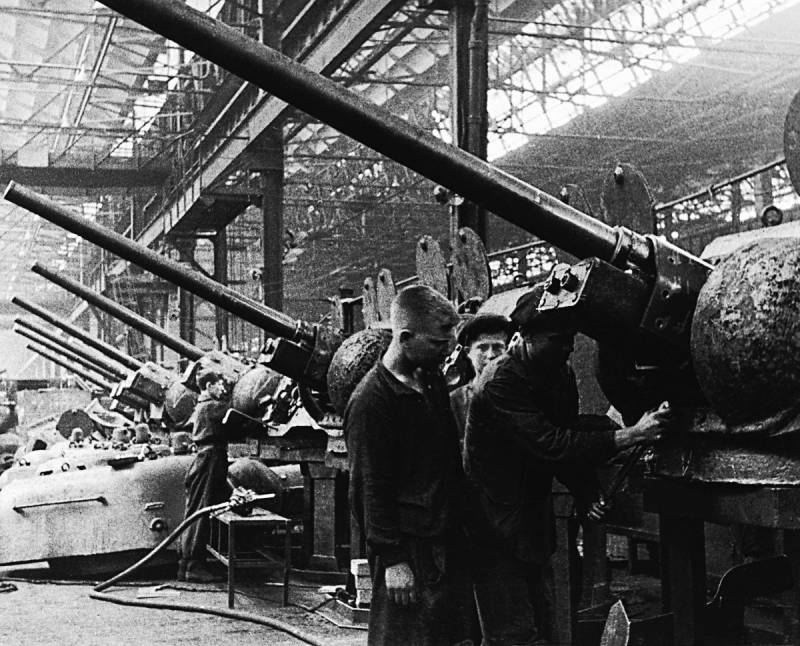 Workers at the towers of T-34 tanks in the shop of the Magnitogorsk Iron and Steel Works. Source: waralbum.ru

Tank factories mostly relied on dinas refractory material produced by the Pervouralsk plant. But, firstly, it was produced only 12 thousand tons per month, and, secondly, metallurgists took the lion’s share.

The expansion of production at the Pervouralsk plant went very slowly. And by mid-1942, only 4 new kilns appeared. The rest were either not ready, or generally existed only in projects.

Refractories for open-hearth furnaces of tank factories often came of poor quality, not in full and at the wrong time. Only for the repair of Uralmash furnaces in the fourth quarter of 1942, 1035 tons of fire-resistant bricks were required, and only about 827 tons were received.

In 1943, the open-hearth shop of Uralmash, in general, almost stopped due to the lack of refractories for repair.

The quality of refractories supplied throughout the war left much to be desired. If under normal conditions the dinas brick of the open-hearth furnace could withstand 400 heats, then in wartime it did not exceed 135 heats. And by March 1943, this parameter had dropped to 30-40 heats.

This situation clearly demonstrates how the lack of one resource (in this case, refractory) can seriously slow down the work of the entire defense industry. As the candidate of historical sciences Nikita Melnikov writes in his works, in March 1943 three open-hearth furnaces of Uralmash still stopped and carried out a full cycle of repair work. It took 2346 tons of dinas, 580 tons of chamotte and 86 tons of scarce magnesite. 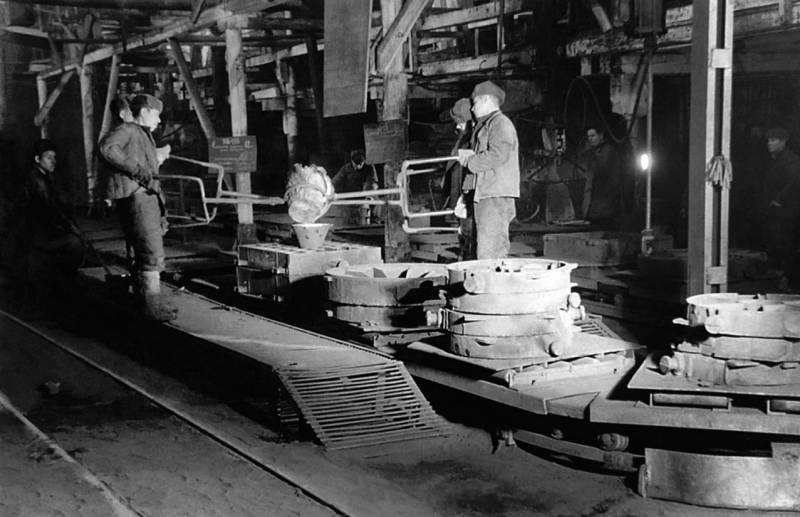 By the middle of 1942, at tank plant No. 183, the situation was developing in a similar way – steel production lagged behind mechanical assembly. And we had to “import” the T-34 hulls from Uralmash.

One of the reasons was the lack of refractories for the repair of open-hearth furnaces, which in the spring of 1942 were working at their limit. As a result, only 2 out of 6 open-hearth furnaces were in operation in the fall. Smelting volumes were restored only in the second half of 1943.

The situation with refractories in the structure of the Soviet defense complex during the Great Patriotic War clearly illustrates the complexity of the situation in the rear of the country.

A chronic shortage of, in general, not the most high-tech product directly affected the pace of production of armored vehicles.