Tank freak show. Today we again visit our tank freak show, and we will start almost from the very beginning. Rather, from what has been preserved from this beginning in the metal. And it will be the British tank “Little Willie”, from which all other tanks began.

And it so happened that when the war was already raging throughout Europe, namely in August 1915, a completely peaceful American ship arrived in Liverpool, which brought, in general, the most peaceful cargo: four American tracked tractors, and to them also a full set of spare parts and everything else. Of course, they could be sent to the army to carry heavy guns. But fate wanted them not to go to the front. When Colonel Crompton was informed of their arrival on August 3, he immediately ordered that they be transported to Barton-on-Trent, where the Royal Air Force’s 20th Squadron Proving Ground was located. Crompton did not arrive there immediately, because he stayed at home with the preparation of drawings for … the Admiralty Committee for Land Ships. Yes, yes, such a committee was created at that time in England, and he was engaged in trying to create a machine capable of fighting the enemy in a completely new way. 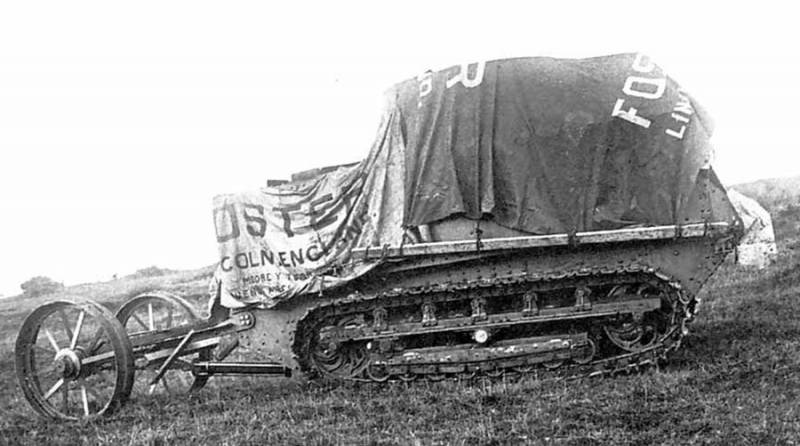 The very first option with “excavator tracks”: “No. 1. Lincoln “

The Committee on “Land Ships” by this time had already abandoned wheeled vehicles, which were at first offered to it, and decided that the “ships” should be tracked. Some of the committee members favored long articulated vehicles, but neither Crompton nor his assistant lieutenant Walter Wilson approved of this idea, as they feared for the strength of the twin machine connection. Of course, on paper, everything looked great: they say, one half of the land ship gets stuck in the crater from the shell, and then the other pulls it out. But when such a connection began to be tested, it turned out that it was unreliable and could not be used!

Therefore, it was decided to use the chassis of new tractors, which in principle had no joints in the chassis. Albert Stern, secretary of the Committee, from his headquarters in Pell Mellstreach, London, immediately afterwards contacted engineer William Tritton of William Foster & Co. will come out, make a “land ship” from one section. 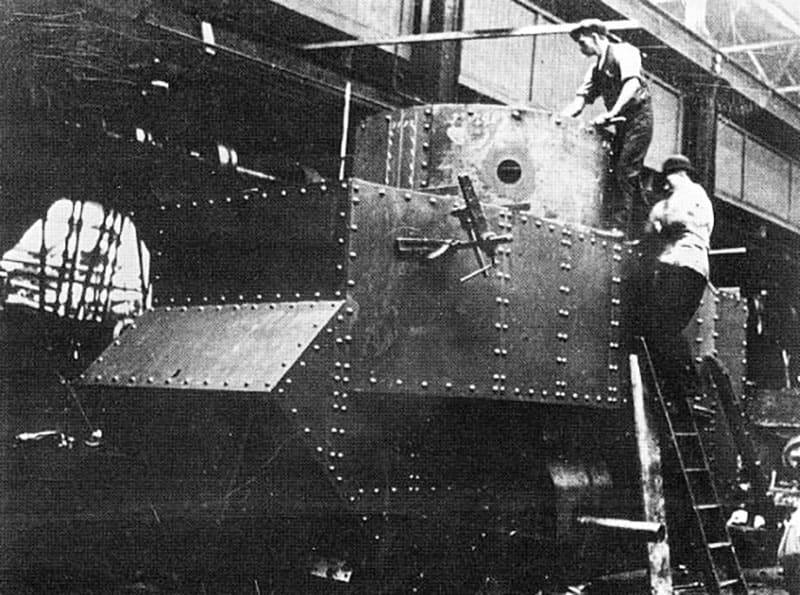 The model of the tower is being mounted!

Meanwhile, all the tractors drove to Lincoln, to the Tritton facility, and then, on August 11, everyone else gathered there. Tritton and Walter found the quality of American cars questionable. For example, you had to use a sledgehammer to hook the tracks of the tracks with the leading sprockets! In addition, although the tractors were made to order and Crompton indicated in it that the bow should be raised, this was not done. Therefore, the caterpillar belts of the machines sent along their entire length adhered to the ground just like the tracks of modern excavators. A lot of bad words were said about the Americans, but work on the “ships” still began.

On September 8, 1915, the first car was ready, and it was run in the yard of the plant. It turned out that she was completely uncontrollable, so they immediately began to redo it. By September 14, the new version was ready. On it, the chassis was raised. On September 19, members of the committee, Eustace Tennyson d’Ayncourt, Ernest Swinton, Walter Wilson, came to watch it. Then the car was covered with a tarpaulin – and in this form, the first real tank in the history of mankind was sent to Cross Cliff Field, Crosscliff Field, where they began to test it. It turned out that the tracks often slip off the idler wheels, but, nevertheless, on September 21, the committee in London sent its famous telegram from Tritton: “The ballad died on the test site yesterday morning.” That is, the tank was “born”, although no one called it a tank yet. 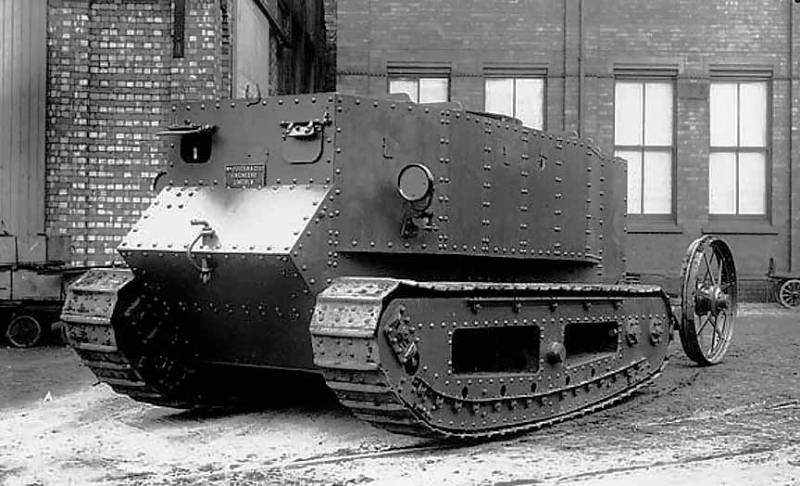 Tritton suggested stamping the tracks. The durability was higher and the technology simpler, although the track bases were still cast. It would seem, what is so difficult? But after all, all this had to be fastened with bolts, the fastening holes had to be marked and drilled under them, and the tracks themselves had to be connected so that the caterpillar tape would not disintegrate later! But everything was done, and already on December 3, 1915, new tracks were installed on the prototype of the car. They tested it right in the yard of the Foster plant, and everyone immediately liked this new car. Previously, the caterpillar bypass was open, but now it was covered with a metal sheet, which imparted greater rigidity to all wheelsets. There was confidence that the track chains would no longer fall off. And by the way, when the car was now lifted with a crane, they did not sag by more than an inch! 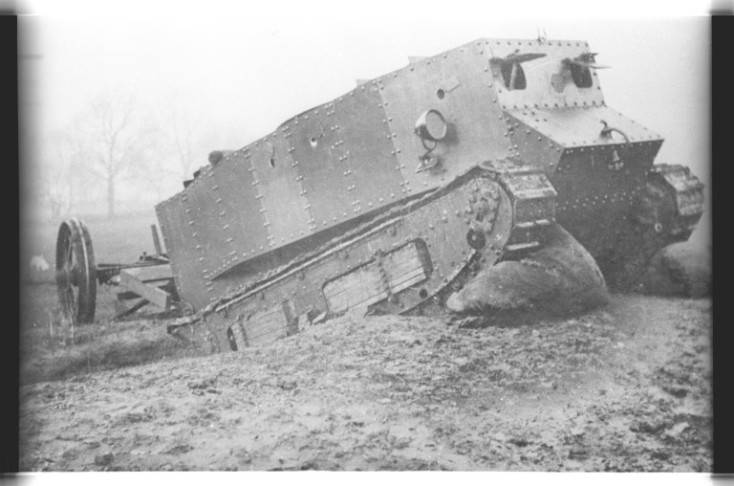 Go! It was smooth on paper, but they forgot about the ravines!

Of course, both Tritton and Wilson, looking at their brainchild in metal, were very happy. However, they already knew that Little Willie would not be finalized. By the way, this name itself appeared because one of the employees decided that the car was similar (!) To its designer Wilson, which is why it was named that way. Well, this is purely British humor. Although, on the other hand, the very first car of Tritton and Wilson was generally called “№1. Lincoln “(named after the city where the manufacturer was located). More importantly, both Tritton and Wilson had already started working on the Mother tank around mid-August, and by the beginning of December its wooden model was ready. 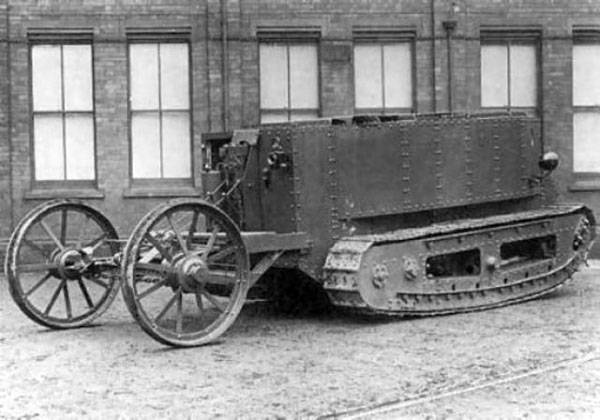 The wheels are just huge …

That is, it was obvious that they had turned out to be a “stillborn child”, but his tracks and caterpillars were quite efficient. During trials, the tank moved awkwardly, which, however, was caused by the presence of a massive tail bogie with large diameter steering wheels. The driver, using a cable system, could deflect it to the sides, which led to the tank turning. But the turning radius was, of course, very large. But the width of the ditch, which could be overcome by “Little Willie”, the military assessed as insufficient, as well as the height of the vertical obstacle, which would be within his power. 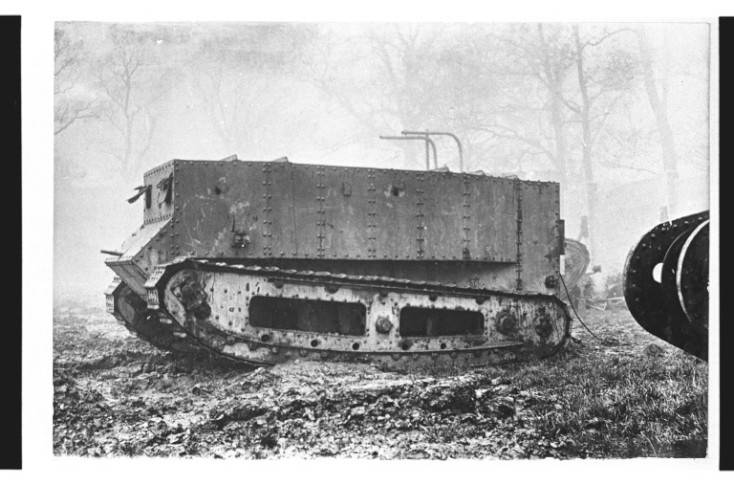 Interestingly, at first the tank had a very solid turret, quite suitable for placing a 40-mm automatic pom-pom cannon in it. And such weapons were fully consistent with the project, according to which the “land ship” should have had exactly the “pom-pom” installed in the tower. In the frontal armor plate there was to be a machine gun, and in the body there were holes for shooting from personal weapons of the crew members. But if the model of the tower was still on the Lincoln, then on the Little Willie it was no longer there, and all efforts were directed to improving the chassis. 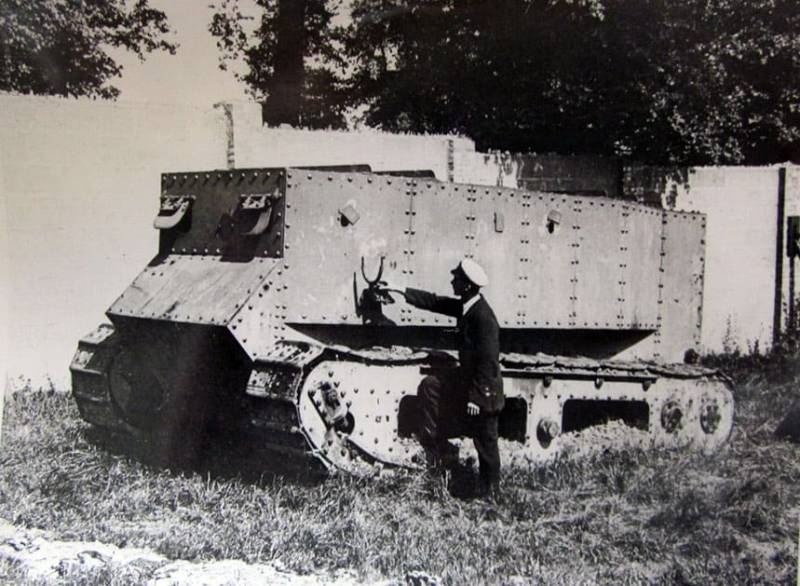 “Willie” and next to him the king himself!

Although it was a turret tank armed with a rapid-fire cannon that was much closer to modern vehicles than the British “rhomboids” adopted for service. In any case, the military lost interest in “Little Willie”, but they still did not begin to dismantle it for metal. He found himself in Wembley Park in London, without the rear wheels. At the end of 1917, this park became a real graveyard of experienced British tanks. And here “Willie” stood for a year. It got to the future Royal Tank Museum in Bovington in 1919 and was kept there until 1928, when King George V arrived in Bovington. He took a picture with this tank during a walk, which, however, did not affect his fate in any way. The tank was all overgrown with thorns and remained in this form for about 20 years. There are legends from the Second World War that “Little Willie” was used as an anti-landing pillbox at Bovington and that it was hidden because it was a national relic, and that it was also transported to Gloucestershire, where it stood near the airfield as a pillbox. The main thing, however, is that the tank has survived and still looks very good, although it is completely empty inside. 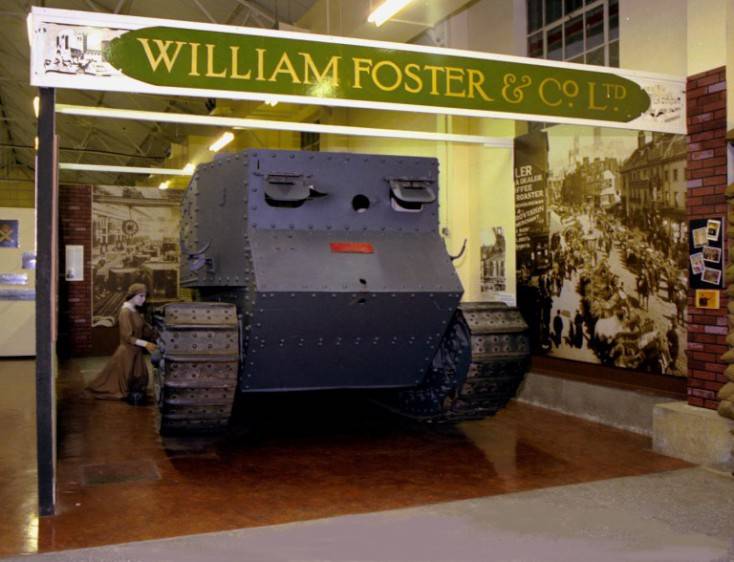 In 1980, it was repainted in a matte gray, which, as the museum experts decided, is closer to its original color than “deep bronze green” (green with a bronze sheen) – the traditional color of British tanks of the Second World War, which at one time was painted and this tank. 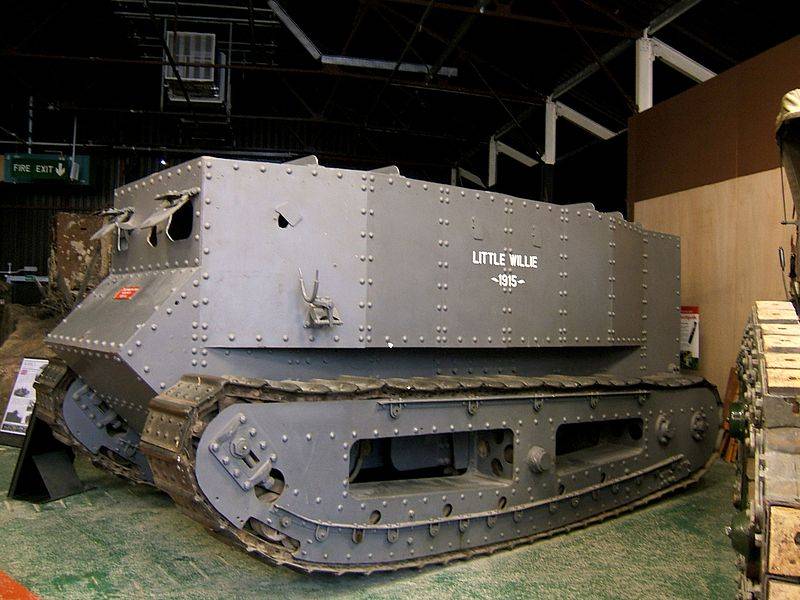 Now it stands in a place of honor in the hall of the museum, and each of its visitors can see exactly where the whole world tank building began. 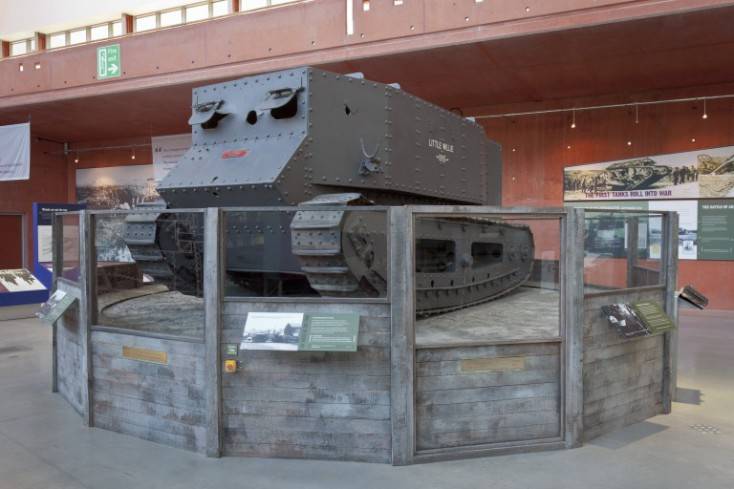 PS It is interesting that, having tested “Little Willie” as a running platform for a combat vehicle, the British did not even attempt to put at least some kind of weapons on it. The layout of the tower with a pom-pom, of course, does not count. When the designers removed it, they closed the hole under the tower with an iron sheet with a small gap and thus arranged something like a flat-shaped ventilation fungus. True, there were nine rifle embrasures on the machine, but nowhere is it said that Little Willie was fired at least once on the move. 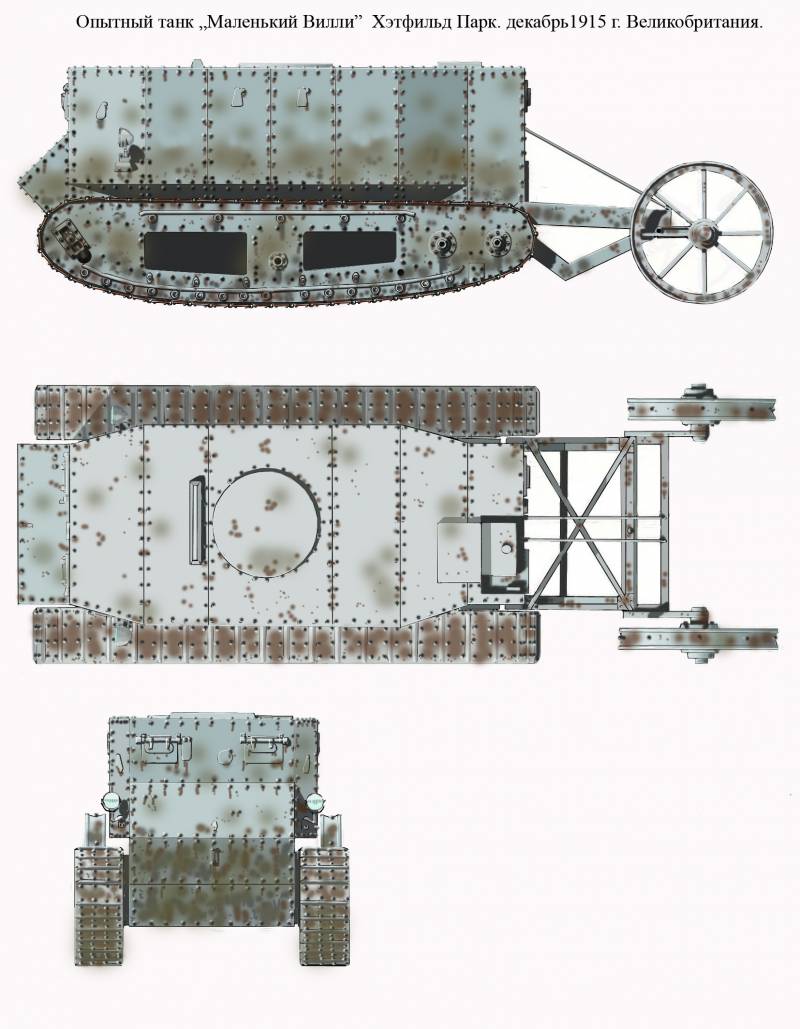 Meanwhile, its design quite made it possible to install two side sponsons on it and put either two machine guns or two 37-mm Hotchkiss guns in each. Although the designers initially did not like the vehicle’s cross-country ability, which is why they chose the version with the “rhombic chassis”, even in this version, the first British tank would actually not be inferior to the French CAI “Schneider” tank. Why was this not done and why the very first British tank was never fired? Today we can only guess on this topic …

Tank “Little Willie” in a hypothetical version with a turret and machine-gun sponsons (fig. A. Sheps)