The first version of the M1E5 carbine (below) compared to the base M1 Photo by Thefirearmblog.com

By the beginning of World War II, the US Army had mastered the newest M1 Garand self-loading rifle well. This weapon showed high technical and combat characteristics and was an excellent replacement for old magazine rifles. However, the characteristic dimensions of this product in some cases made it difficult to use. The troops needed a carbine with similar combat qualities, but smaller dimensions.

The M1 Garand rifle had a length (without bayonet) of 1.1 m and weighed (without cartridges) at least 4.3 kg. This was normal for infantry weapons, but gunners, tankers, etc. needed a more compact weaponry. In 1942, the US Army adopted the new M1 carbine. It was compact and lightweight – but it used a less powerful cartridge and was inferior to the Garand in terms of fire performance.

In 1943, new requests and wishes from the units began to arrive at the relevant bodies of the military department. Troops actively working on the front line would like to get a promising rifle with ergonomics like the M1 Carbine and combat characteristics at the level of the M1 Garand. Such a model could help in the fight against the enemy in all theaters.

At the very beginning of 1944, the Infantry Commission of the Ministry of Defense received a more specific proposal of this kind. The officers of the 93rd Infantry Division, based on the accumulated experience, drew up a project for converting the regular “Garand” into a lightweight carbine. Such a product was made and tested with very interesting results.

Based on the results of tests of the “handicraft” carbine, the Infantry Commission instructed the Springfield Arsenal to study the proposal of the 93rd Division. Then they had to develop their own project, taking into account the specifics of mass production and weapons in the army. It is curious that the work on the carbine was personally led by John Garand, the creator of the M1 base rifle.

The carbine was supposed to make the most of the units of the serial rifle. Only individual elements have undergone refinement, primarily the fittings. As a result, the work was completed in just a few weeks. Already in February 1944, an experimental carbine with the working designation M1E5 was submitted for testing.

The standard barrel, 24 inches (610 mm) long, was replaced with a new 18-inch (457 mm) barrel. The chamber and the base of the front sight remained near the muzzle, and also retained the influx for installing the bayonet. The design of the gas engine as a whole remained the same, but some parts were shortened. The shutter did not change. The return spring was replaced in accordance with the change in gas pressure due to a decrease in barrel length.

The second version of the carbine with a folded stock. Photo Historicalfirearms.info

The shortened barrel required the removal of the front element of the stock. The upper barrel pad remained in place. The stock itself was cut off behind the receiver, removing the butt. In place of the cut, a reinforcing metal casing with axles was installed for installing a new butt. The butt itself had a folding design and consisted of two movable frames and a butt pad. If necessary, it folded down and forward and was placed under the box. It was suggested to hold the weapon when firing beyond the frame “neck” of the butt.

Taking into account the new characteristics of the barrel and other ballistics, the standard sight was redesigned. In addition, a separate sight for rifle grenades has appeared. Its main element was a rotary disc with a notch – it was installed on the butt joint on the left.

The M1E5 carbine with an unfolded stock was 952 mm long – almost 150 mm less than the original rifle. By folding the stock, you could save approx. 300 mm. The weight of the product without cartridges did not exceed 3.8 kg – the savings amounted to a whole pound. A slight drop in fire performance was expected, but this could be an acceptable price to pay for greater convenience.

Carbine at the training ground

In February 1944, Arsenal assembled an experimental M1E5 carbine and tested it in May. The results were mixed. In terms of compactness and lightness, the carbine was superior to the base rifle, although it was inferior to the serial M1 Carbine. In terms of fire characteristics, the M1E5 product was close to the Garand, but slightly inferior to it. 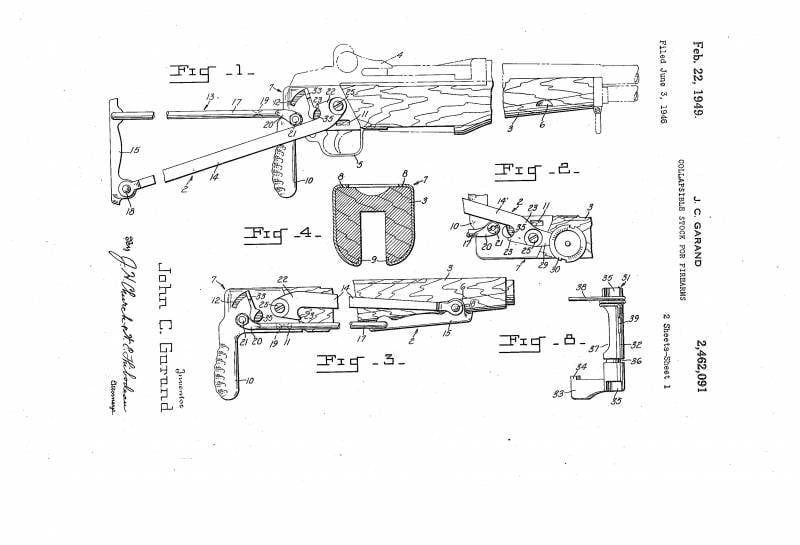 The folding stock performed well, although it needed some work. The carbine had to retain the ability to fire rifle grenades, and the proposed frame stock could not withstand such loads and needed reinforcement. In addition, the carbine needed a separate pistol grip. The carbine turned out to be inconvenient to hold, and shooting with the stock folded was virtually impossible.

The shortened barrel made it possible to maintain accuracy and accuracy at ranges up to 300 yards. At the same time, the muzzle flash and recoil increased. This required the development of a new muzzle brake and flash suppressor, as well as taking measures against a weak butt.

In general, the new project was considered interesting and promising, but in need of improvement. As a result, according to the results of the first tests, the M1E5 project received a new Rifle M1A3 index, indicating the imminent adoption into service.

In the early summer of 1944, a group of engineers led by J. Garand set to work on the finalization of the carbine. The first step in this direction was the installation of a pistol grip. This part had a specific shape and was mounted on the butt stock housing. An existing prototype was used to test such a handle. 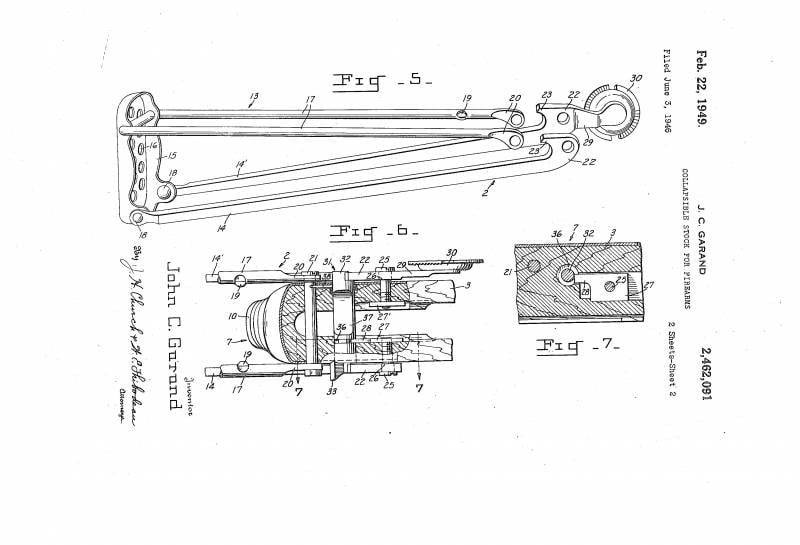 Butt design described in the patent

Then work began on a muzzle device and a reinforced butt. However, during this period, the M1E5 / M1A3 project faced new difficulties, this time of an organizational nature. Springfield Arsenal began development of an automatic version of the Garanda, designated the T20. This project was considered a priority, and it occupied the bulk of the designers. Work in other areas slowed down sharply.

Due to such difficulties, the M1A3 project could not be completed by the end of 1944, and it was decided to close it. They did not have time to make a full-fledged carbine with a handle, a muzzle brake and a reinforced butt. After the war, in 1946, J. Garand applied for a patent describing the design of a folding stock with a built-in sight for rifle grenades.

For several months, the idea of ​​a folding version of the M1 Garand faded into the background. However, the troops still expected such weapons and sent more and more requests. In July 1945, a new project of this kind was initiated by officers from the command of the Pacific theater of operations.

They instructed the arms shops of the 6th US Army (Philippine Islands) to urgently make 150 Garand rifles with a shortened 18-inch barrel. These rifles entered military trials, and one sample was sent to Aberdeen for official checks. In addition, a request was sent to start production of such rifles as soon as possible. In the Pacific Ocean, at least 15 thousand of such products were required. 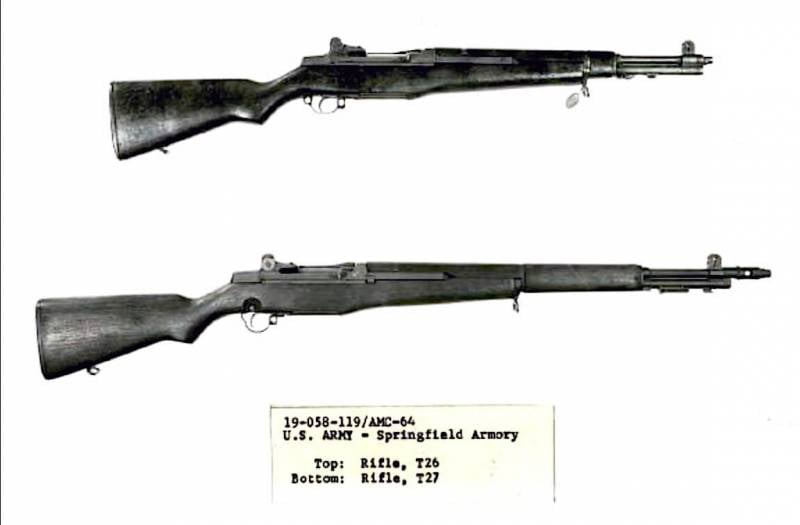 The “Pacific” carbine differed from the base M1 Garand only in the length of the barrel and in the absence of some fittings; he kept a regular wooden stock. The carbine was accepted for testing, assigning it the T26 index. The characteristic purpose of the weapon has led to the emergence of the nickname Tanker – “Tanker”.

The request for a carbine came too late. In just a few weeks, the war in the Pacific was over, and the need for the T26 was gone. No later than the beginning of autumn 1945, work on this project was stopped. However, according to various sources, such a weapon managed to take part in battles. Several carbines made by the 6th Army ended up at the front.

For all the time, almost 5.5 million M1 Garand self-loading rifles have been produced. M1 Carbine production exceeded 6.2 million. J. Garand’s M1E5 / M1A3 carbine was made in just one copy for testing. It is now in the Springfield Armory. The T26 product turned out to be more successful, but an experimental batch of 150 units did not leave a noticeable mark either.

Thus, two projects of carbines based on “Garand”, created in 1944-1945, did not lead to real results, and the US Army had to end the war only with samples mastered in a series. However, this was not the fault of the carbines themselves. They were abandoned for organizational reasons, but not because of fatal technical problems. Perhaps, under a different set of circumstances, these projects could reach their logical conclusion, and the customer would receive a compact, but powerful and effective weapon.