The McMillan TAC-50 rifle is rightly considered the epitome of small arms that has revived interest in anti-material rifles. At least this statement is exactly true for the United States. In America, the rifle was adopted in 2000, and since then it has been actively used by the American armed forces. According to experts, the large-caliber 12.7-mm rifle impressed the military of many countries of the world with its accuracy. Today, this model is in service with the Marine Corps and the special operations forces of the US Navy, as well as special forces and the military of Canada, France, Turkey, Israel and other countries of the world.

For some time, anti-material rifles experienced a decline in their development, as the niche of their use was reduced, which, in fact, was reduced to the defeat of light vehicles vulnerable to .50 BMG ammunition. In this regard, the McMillan rifle was able to again attract the attention of the US military, offering the shooter a high level of versatility. The rifle is equally good at striking objects of military infrastructure, lightly armored targets, but, more importantly, it is effective against single human targets at long and ultra-long distances. With the help of this rifle, you can hit the command staff of the enemy at a great distance. Fortunately, the TAC-50 rifle combines a high effective firing range with good stopping and penetrating action and high accuracy, which is characteristic of the best examples of military sniper weapons.

The history of the creation of the McMillan TAC-50 rifle

We can say that all modern large-caliber sniper rifles grew out of the first anti-tank rifles, the development of which began at the end of the First World War. An example is the German Mauser T-Gewehr rifle of 1918, which could hit the armor of British Mark IV tanks. During the Second World War, anti-tank guns, which were real anti-material weapons, flourished especially rapidly. The best examples of such weapons were the Soviet PTRD of the 1941 model and the British Boys anti-tank rifle. These models made it possible to fight against light tanks of Germany and light wheeled-tracked armored vehicles of the enemy.

After the end of World War II, interest in anti-material rifles dropped worldwide. Large-caliber sniper rifles were created, but they were not as massive and in demand as before. The designers of a small American company McMillan tried to reverse this trend in 1996. The development of a new rifle began in the second half of the 1980s and continued with varying success until the 2000 year. Released seven years after the introduction of the powerful but relatively inaccurate M107 sniper rifle, the TAC-50 rifle was an anti-material weapon that could be used as a long-range sniper rifle. 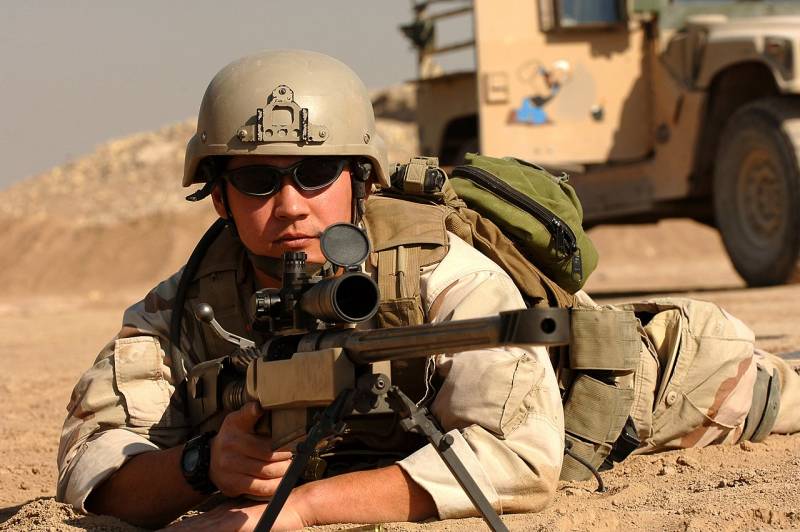 In 2000, the rifle was put into service. Simultaneously with the start of operation, the serial production of the model began, which continues today. The rifle is still mass-produced, and even ordinary citizens can purchase this weapon on the American market. Sale of the McMillan TAC-50 rifle is allowed in all states except California. However, the purchase will not be cheap. For the purchase of one of the best large-caliber sniper rifles, those who wish will have to shell out at least $ 11,999 from their pockets. We are talking about the updated TAC-50C model, built on the Cadex Dual Strike chassis (stock). In this case, the shooter will have to pay additionally for a sniper scope and a body kit. In turn, the rifle’s lifetime warranty is a nice bonus.

McMillan TAC-50 is a classic large-caliber sniper rifle chambered for the NATO cartridge 12.7×99 mm. Technically, the model is a bolt action rifle. The rifle is powered by a magazine, carried out from box magazines, designed for 5 rounds. The manufacturer sells weapons without sniper scopes. At the same time, the presence of Picatinny rails allows you to install various modern sights and bipods on the rifle. For example, the standard scope for the Canadian Armed Forces TAC-50 rifles is the 16x scope.

When using suitable sniper ammunition, the manufacturer guarantees the model an accuracy of less than 0.5 MOA per 100 yards. This makes the McMillan TAC-50 anti-material rifle one of the few prototypes that can be used very effectively as a long-range sniper rifle. The rifle’s accuracy allows trained shooters to confidently hit targets at long and ultra-long distances. The three longest successful sniper shots of the top 5 were fired from the TAC-50 rifle.

One of the features of the rifle is its relatively low weight for its class. Modern designs weigh 24 pounds (10.8 kg) without ammunition and scope. But even the first TAC-50 models already weighed within 11 kg, which is a very good indicator for a large-caliber sniper weapon. The rifle stock is made of fiberglass: a typical solution for modern high-precision systems. The rifle butt is made of carbon fiber. The shooter has the ability to completely separate it from the weapon by simply pressing the locking button. The butt plate received special rubber shock-absorbing inserts. 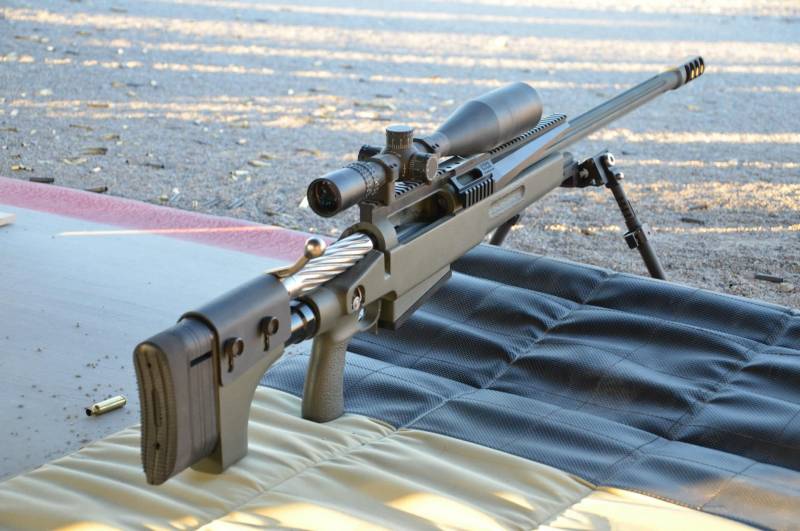 The rifle has a total length of 57 inches (1448 mm). Barrel length – 29 inches (737 mm), which is almost half of the total length of the weapon. The barrel is freely suspended, made of chrome-molybdenum steel. In terms of strength, such steel is comparable to modern titanium alloys, but it has a higher density. To facilitate the rifle, there are longitudinal valleys on the barrel. The barrel is crowned with a massive muzzle brake, which is a proprietary design by McMillan. It improves shooting accuracy and reduces the huge recoil that occurs when firing 12.7 mm ammunition.

Trigger pull is adjustable from 3.5 to 4.5 pounds, with a manufacturer’s recommended value of 3.5 pounds (approximately 1.6 kg). The effective range of the rifle is 2000 meters. It is for this range that the standard Leupold Mark 4-16x40mm LR / T optical sights are designed. But, as practice shows, two kilometers is not the limit for this sniper rifle.

It so happened that it is the McMillan TAC-50 large-caliber sniper rifle that owns the most accurate long-range shots today. Moreover, representatives of the Canadian special forces have succeeded best in mastering this formidable weapon. The record shot is believed to have been fired in 2017 by a Canadian sniper from the 2nd Joint Task Force (the shooter’s name was not disclosed). In Iraq, he managed to kill a terrorist organization fighter from a distance of 3540 meters. With this shot, the bullet flight time was up to 10 seconds.

Prior to that, record shots were also made from the TAC-50 rifle, but they pale in their effectiveness with a shot at a distance of 3.5 kilometers. It is known that in 2002, two snipers from the Canadian army managed to hit live targets at a distance of 2310 and 2430 meters. Aimed shots were made by Arron Perry and Rob Furlong. Before them, the most accurate sniper shot belonged to the American Marine Carlos Hascock, who distinguished himself during the Vietnam War, hitting a target at a distance of 2286 meters. 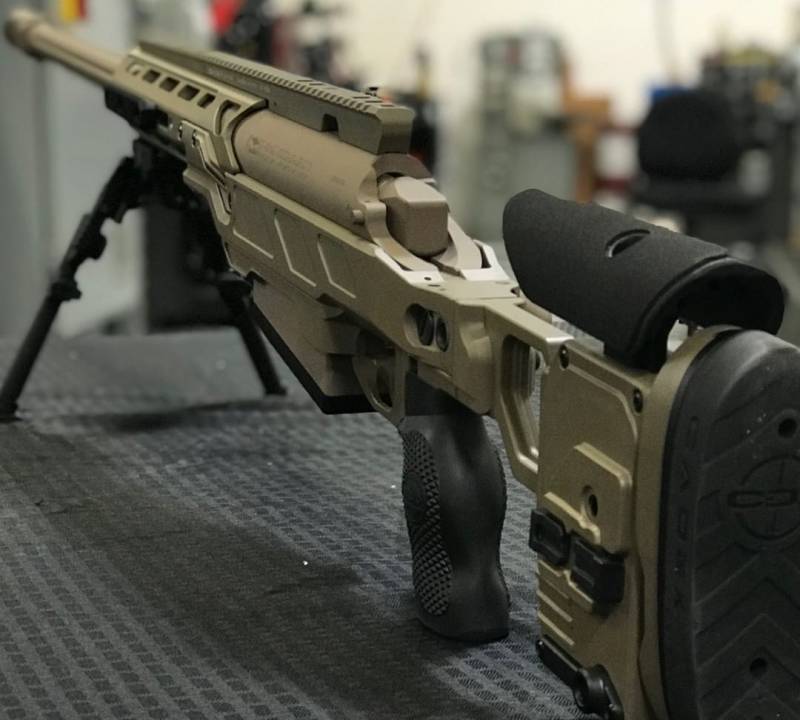 It’s important to understand that even experts recognize that hitting a human-sized target at this distance has a lot to do with luck. At such a long distance, the shot itself is greatly influenced by various factors of external and internal ballistics, which affects the trajectory of the bullet. At a distance of 2.5 kilometers, the dispersion will be at least 0.7 meters, even with the best ammunition. An arrow’s mistake in determining the wind speed of 0.5 m / s will lead to a bullet deflection by one meter from the target. And an incorrect determination of the range to the target by only 10 meters will cause the bullet to drop by almost one meter from the aiming point. So any successful shot at maximum distance is not only a high quality weapon and excellent training of the shooter, but also a tangible amount of luck.

At the same time, no one will argue with the fact that the McMillan TAC-50 rifle allows the shooter to make such shots. As the journalists of The Globe and Mail reported at one time, the accuracy of the record shots of Canadian snipers was confirmed using video cameras and other means of control and reconnaissance.