To date, the main attack helicopters of the army aviation of the Aerospace Forces have become the Mi-28N and Ka-52 – the troops already have more than 220 aircraft of two types, and construction continues. In parallel with production, the development of new modifications with improved characteristics is being carried out. One updated helicopter has already gone into production, and the other will reach production in the near future.

In July 2016, the first flight of an experimental Mi-28NM helicopter, an improved version of the serial Mi-28N “Night Hunter”, took place. Over the next few years, the helicopter underwent comprehensive tests, which confirmed the high results of modernization. At the beginning of 2019, the Mi-28NM showed its potential in a real conflict – the machine worked in Syria. All characteristics were confirmed, and the helicopter received a recommendation for adoption.

The first contract for the production of the Mi-28NM was signed at the end of 2017. Then it was about an installation batch of equipment. The first helicopter of this order took to the skies in the spring of 2019 and was soon followed by the second. In June, the equipment was handed over to the customer. Soon, the management of Russian Helicopters clarified that it was the entire installation batch. 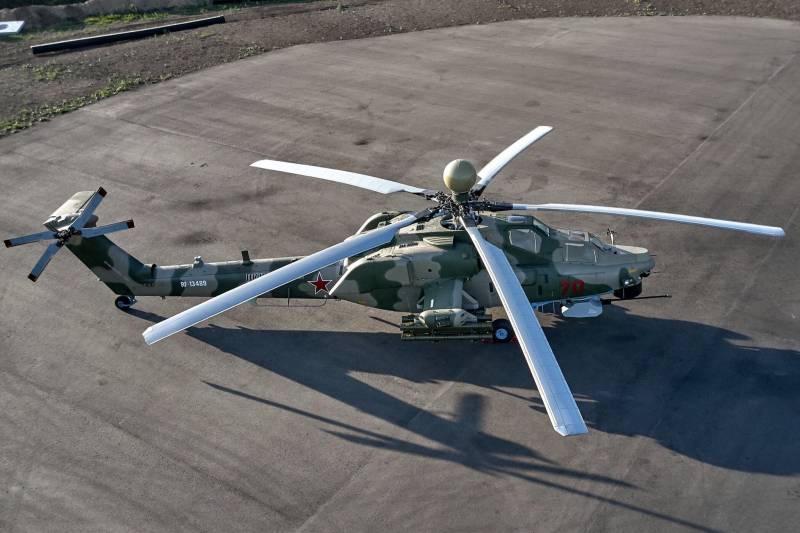 At the end of June last year, during the Army-2019 forum, a contract for full-scale serial production was issued. The Ministry of Defense has ordered 98 Mi-28NM helicopters with the first delivery in 2020. The first batch, according to the contractor, will include six machines. The last helicopters will go to the troops in 2027.

The number of helicopters built to date is unclear. It was reported about the transfer of two machines of the pilot batch; news of other helicopters has not yet been reported. However, if plans have not changed, then over the next few months, army aviation will receive six new Mi-28NM.

The Mi-28NM is a deep modernization of the previous “N” version helicopter. Due to the processing of some units and the replacement of part of the equipment, an increase in tactical, technical and combat characteristics is provided. In addition, there are ergonomic and other innovations. 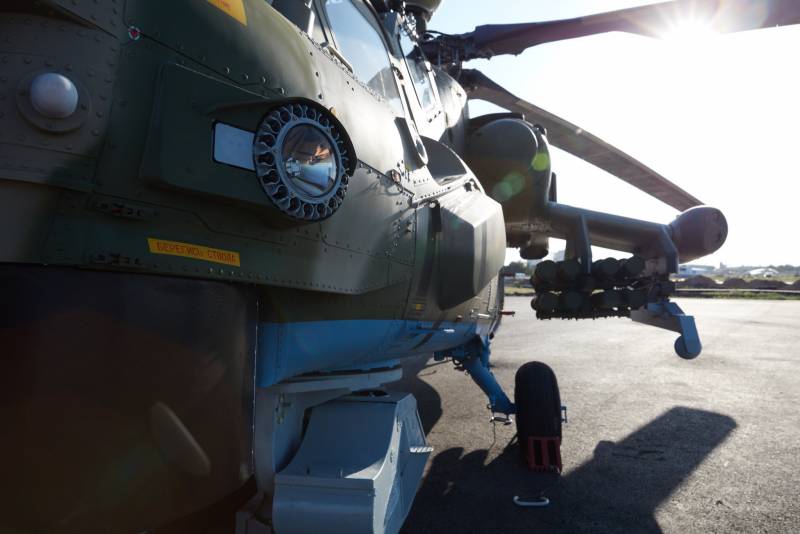 The electronic complex has been improved, and some of its changes have affected the appearance of the helicopter. So, the N025 over-sleeve radar became standard. The composition of the antennas has changed, as a result of which the nose of the fuselage has a different shape. A new weapons control system has been introduced, which ensures the use of modern and advanced models. Helicopter controls are now available in both cockpits, which allows the navigator-operator to fly as well. An on-board defense system has been installed to protect against anti-aircraft and aircraft missiles.

The Mi-28NM retains compatibility with all weapons for its predecessors. The groundwork for further expanding the range of weapons has also been provided. So, a light multipurpose guided missile LMUR has already been developed for work on ground and air targets. The new composition of avionics will allow in the future to use promising missiles with laser or radar guidance.

Not so long ago, work began on the modernization of the Ka-52 Alligator attack helicopter. The Ka-52M project has so far passed only the early stages and is not yet ready for the production and dispatch of equipment to the troops. Nevertheless, important results have been obtained to date. 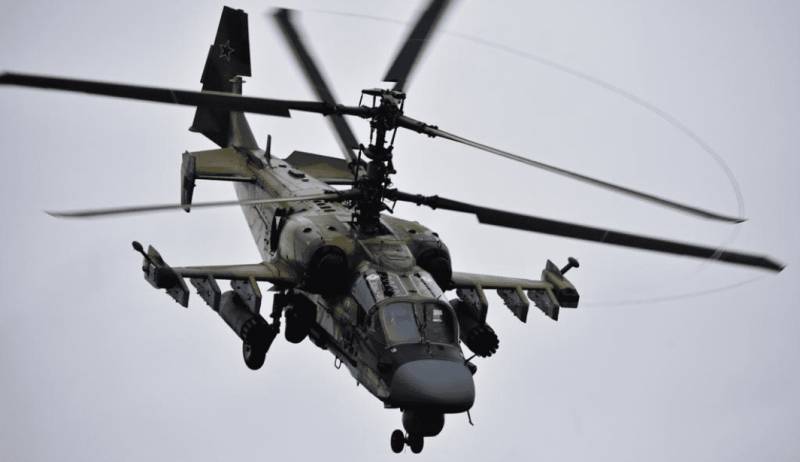 Despite the current status of work, the Ministry of Defense already has ambitious plans for the Ka-52M. Last year, it was reported that a contract for 114 production vehicles of this type would be signed in 2020. At the same time, the department understood and took into account that the first batches would be produced only in a few years.

At the beginning of June 2020, the National Center for Helicopter Engineering named after V.I. Mil and Kamov ordered the Progress plant to build and test two experimental Ka-52Ms. The cost of the work is more than 153 million rubles. The next news came in early August. The first of the experimental helicopters took off for the first time at the Progress airfield. Refinement and factory testing of the two vehicles will continue until the end of the year.

By the beginning of 2021, two Ka-52M helicopters will be transferred for preliminary flight tests, after which they will undergo state tests. All these activities must be completed no later than September 2022. If the helicopter confirms its characteristics, then a recommendation for adoption will appear and serial production will be launched. A major contract should be signed by then.

It was reported that the development of the Ka-52M used the experience of operating such equipment in our country and abroad. Also applied are the solutions borrowed from the existing modifications of the “Alligator”. The result was an improvement in flight and operational characteristics, an increase in combat qualities, etc. 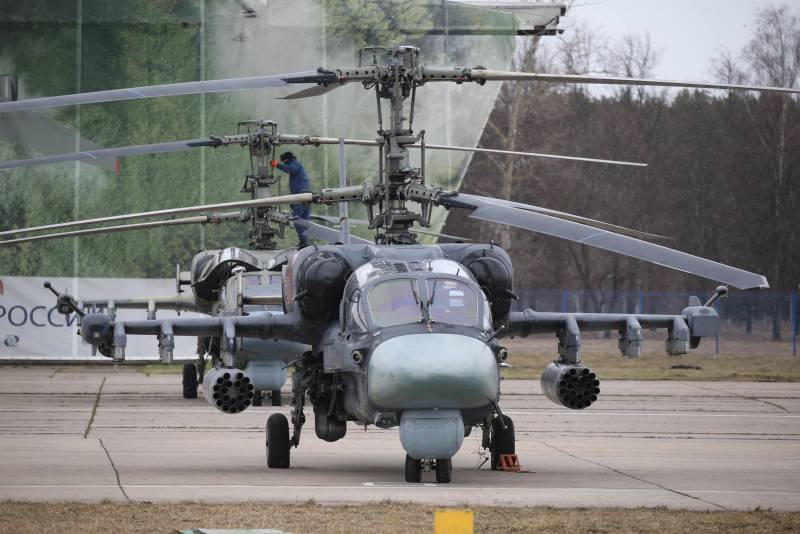 The Ka-52M receives an updated radar complex with AFAR and a modern optoelectronic complex. Improved navigation, communication, etc. The interior of the cab has been changed to improve ergonomic characteristics and improve the convenience of working at any time of the day. Various units have been improved, including the support system, which allows the helicopter to operate in colder climates.

At the request of the Ministry of Defense, the weapons control facilities have been modified. Unification of the Ka-52M ammunition with the serial Mi-28NM was ensured. This simplifies the simultaneous operation of two helicopters, and also increases the firing range at various targets. The artillery mount has also been improved. The development of a new guided missile “Product 305” is mentioned.

To date, the Aerospace Forces has created a fairly large fleet of modern attack helicopters. There are more than 120 Ka-52 helicopters and approx. 100 Mi-28N and Mi-28UB. The production of equipment continues and the number of vehicles will increase by the end of the year. Also in operation is approx. 160 new and modernized Mi-24/35 helicopters.

Last year, the Mi-28NM helicopter went into production and now has to replace the older Mi-28N / UB in production. 98 of these helicopters have been ordered for delivery in 2020-27. Thus, by the end of the decade, the Aerospace Forces will have at their disposal almost two hundred helicopters of the Mi-28 family, half of which are built according to the newest project and have improved characteristics. 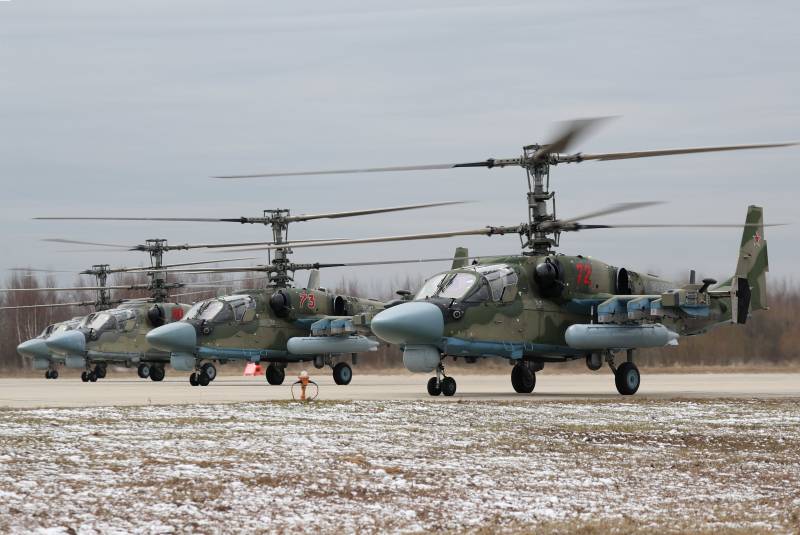 The Ka-52M will remain in testing until 2022, and only after that the series will start. Apparently, until that time the basic Ka-52 will remain in production, after which it will be replaced by the “M” version. The expected order for 114 helicopters will bring the total number of Alligators to 230-240 units. However, the timing of the formation of such a park is still unknown.

Thus, the army aviation of the Aerospace Forces has already undergone significant modernization, and its renewal continues. There are plans for 212 new helicopters, the appearance of which will allow replacing the equipment of outdated types, as well as increasing the quantitative and qualitative indicators of the helicopter fleet.

However, so far we are only talking about matters in the distant future. Only one of the two modernized helicopters has been brought to serial production, and the construction process of more than two hundred machines will stretch almost until the beginning of the thirties. But work on two samples of technology continues and gives the desired results – and with them, and reason for optimism.