In the foreseeable future, the newest 6S20 Mixture grenade-and-flame thrower complex may enter service with the Russian army. Work on this product is nearing its final stage, and soon the first samples will go to the test site. After their completion, the complex is expected to be put into service. It will be included in the promising combat equipment “Sotnik”.

According to open data

The existence of the project with the code “Mix” first became known in February 2019. In the thematic collection “Missile-technical and artillery-technical support of the Armed Forces of the Russian Federation – 2018” from the Ministry of Defense, the appearance and main features of the new weapon were disclosed.

The collection pointed to the emergence of “conceptually new melee weapons” suitable for the destruction of manpower, various equipment and structures – rocket-propelled grenades and assault grenades. The emergence of such models is associated with the generalization of the experience of conflicts in recent years. The development of weapons is carried out with an eye to introducing the next third generation into combat equipment.

New details appeared only a few days ago in Izvestia and were obtained from unnamed sources in the defense industry. It is claimed that the development process for the 6S20 Mixture product is nearing completion. The documentation for this complex has already been handed over to the Planta chemical plant (Nizhniy Tagil), which is to set up serial production.

The grenade and flamethrower complex is preparing for testing. The verification process will continue for over a year. According to the established schedule, state tests will be completed next fall. After that, the product will have to be adopted.

The Mixture complex includes several main components. This is a multifunctional sight and two types of rocket-propelled grenades in disposable transport-launch containers. This architecture allows you to get the best balance of combat and operational characteristics.

There are two models of rocket-propelled grenades – with tandem cumulative and thermobaric warheads. They have a caliber of 72.5 mm and are unified in terms of their propulsion system. The parameters of the anti-tank ammunition have not yet been specified – only its ability to hit armored vehicles with dynamic protection is stipulated. The volumetric explosion grenade is said to be comparable in power to a howitzer shell. The flight characteristics of the grenades are unknown.

Ammunition is supplied in disposable tubular TPK. The ends are covered with breakable covers with a protruding soft rim to prevent impacts. The container has connectors for installing fire controls.

The most interesting component of the “Mixture” is the sighting device installed on the TPK. The compact rectangular unit is equipped with day and night optics, as well as a laser rangefinder. There is a ballistic computer that generates data for firing. The processed signal with additional data is displayed on the monitor in the eyepiece. There is a spare open sight of the type used on old grenade launchers.

Depending on the task at hand, the grenade launcher must choose a TPK with a grenade of the desired type. An aiming unit is installed on it. When aiming, the latter ensures the determination of the range to the target and the calculation of data for firing, which sharply increases the accuracy and effectiveness of fire. After firing, the container is separated from the sight and thrown away.

The necessity and combat value of rocket-propelled grenade launchers / grenades and flamethrowers is obvious. Such a weapon allows you to effectively deal with various targets at significant ranges and has a positive effect on the capabilities of the infantry. However, modern samples of this kind have certain limitations – in terms of accuracy, range of targets, etc. 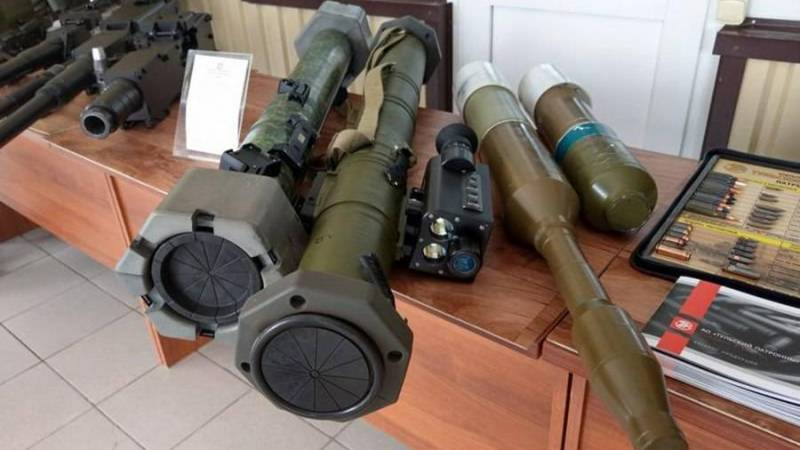 Complex 2S60 and its grenades

Project “Mix”, justifying its name, provides for the creation of a universal complex, devoid of such disadvantages. First of all, this is ensured by the presence of two grenades for different purposes. A single complex with such ammunition is capable of replacing the systems of two different classes that are in service now, while obtaining comparable combat qualities.

The exact characteristics of the grenades have not yet been reported, but the available data allow us to draw some conclusions. So, the anti-tank ammunition of the tandem scheme allows you to get maximum performance in the given dimensions. Such a grenade will be able to hit a wide range of light and medium armored vehicles. In a number of situations, effective use against tanks is also possible.

A thermobaric grenade is said to be as powerful as an artillery shell. Some existing samples show that the volumetric explosion ammunition in the dimensions of a grenade launcher is really capable of showing a high-explosive effect at the level of a 122-mm projectile. Such ammunition is of obvious interest to the army.

The most important advantage is the availability of a “reusable” sight with the most necessary functions. Until now, domestic grenade launchers / grenades and flamethrowers were equipped only with mechanical sighting devices with limited capabilities. In some situations, this could lead to errors and a drop in accuracy.

A fundamentally new electronic product will take on the most difficult tasks in preparation for shooting and eliminate possible errors. Accordingly, the accuracy of shooting will increase dramatically. Optical-electronic sight with two channels allows you to use weapons at any time of the day, which gives serious advantages.

Weapon of the future

So far, not too much is known about the 6S20 Mixture grenade-and-flame thrower complex, but the available data also make a good impression. Everything suggests that domestic gunsmiths, already having extensive experience in the field of grenade launcher systems, have managed to create a new successful model with great potential. It is quite possible that in the future the modern “Mix” will replace several outdated grenade launchers and grenades at once.

However, the 6C20 product is not yet ready for operation and mass production. He has yet to confirm the declared characteristics during tests. Their completion is scheduled for the fall of next year, after which issues of acceptance into service will be resolved. Then some time will be spent on the production of a sufficient number of complexes and their development in the troops.

It should be recalled that the “Mix” is not an independent development, but is being designed within the framework of promising military equipment for a serviceman. Together with the grenade launcher, the Sotnik may include a promising machine gun and machine gun, new uniforms, protective equipment, communication systems, etc. Thus, the 6S20 project has a great future – both in itself and as part of promising equipment.