At the parades on June 24, they showed a large number of promising weapons and equipment, incl. brand new. One of these novelties was demonstrated in Tula – at the place of development. In the parade formation, for the first time in front of the public, a promising mobile reconnaissance post PRP-5 or “Mars-2000” passed. Let’s consider this product in more detail.

According to known data, the development of PRP-5 was carried out by the Tula PJSC NPO Strela with the involvement of a number of other organizations. According to his open documents, in the spring of 2012 a contract was signed with the Ministry of Defense for the development of a mobile reconnaissance station PRP-5, the code of the topic is Mars 2000.

The next mentions of the PRP-5 project in the open press appeared only a few years later. At the beginning of 2015, the corporate publication of the RG group of companies spoke about its work in recent years. Among other things, the fruitful cooperation of CJSC Gidrosila (part of the RG group) with NPO Strela on the subject of Mars-2000 was mentioned. In 2013, Hydrosila was alleged to have manufactured and tested a mockup of a hydraulic lifting mast. In 2014, an order appeared for the assembly of finished products for installation on experimental equipment. The messages were accompanied by a photograph of the mast.

In 2015, NPO Strela received a patent No. 2557770 for a new design of a telescopic mast. After that, there were disputes that reached the court. The court documents mentioned the Mars-2000 ROC, within the framework of which the mast was created. The proceedings ended in 2018 and likely influenced the course of the project. 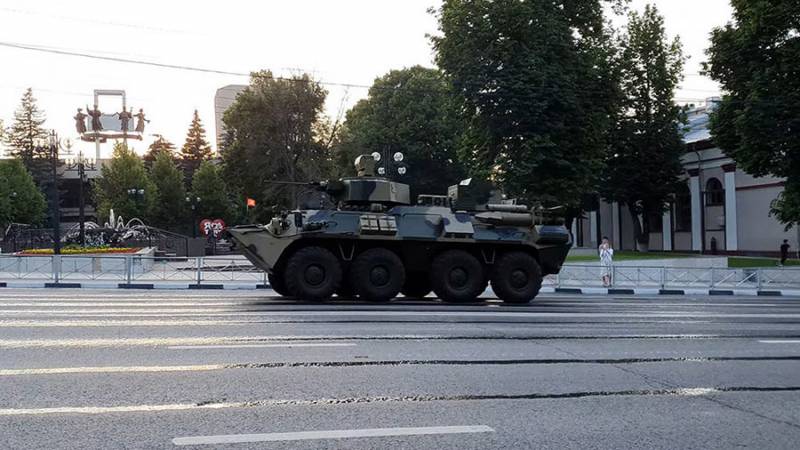 On May 27, 2020, TASS published excerpts from a conversation with the General Director of Military Industrial Company LLC Alexander Krasovitsky. He spoke about the development of new types of equipment based on the BTR-82 armored personnel carrier. In particular, a “new combat reconnaissance vehicle” called “Mars-2000” is being created. Unfortunately, this time too, the official announcement did not go without any particular details.

On the eve of June 24, rehearsals of the festive parade were held in several cities, and these events traditionally attracted public attention. At a training session in Tula, a new sample was noticed – a previously unknown vehicle based on the BTR-82, equipped with a specific turret and other units. Soon it became known that this was a mobile reconnaissance point PRP-5. It was shown for the first time in Tula – at the place where the project was developed.

Unfortunately, most of the data on Mars 2000 has not yet been published. Only the purpose of this machine, the type of base chassis and the presence of some units from subcontractors are reliably known. In addition, some conclusions can be drawn after an external examination, although the main parameters will remain unknown after that.

The basis for the PRP-5 was the wheeled chassis of the BTR-82. It is easy to see that when converted into a mobile reconnaissance point, the armored personnel carrier loses some devices and receives new ones. So, behind the turret ring there is a small superstructure, the configuration of the side hatches has been changed. A new unit is placed in place of the standard cannon and machine gun turret; behind it on the roof is a new casing of unknown purpose. There are other innovations as well. At the same time, apparently, the level of protection, mobility and other characteristics of the basic armored personnel carrier have been preserved. 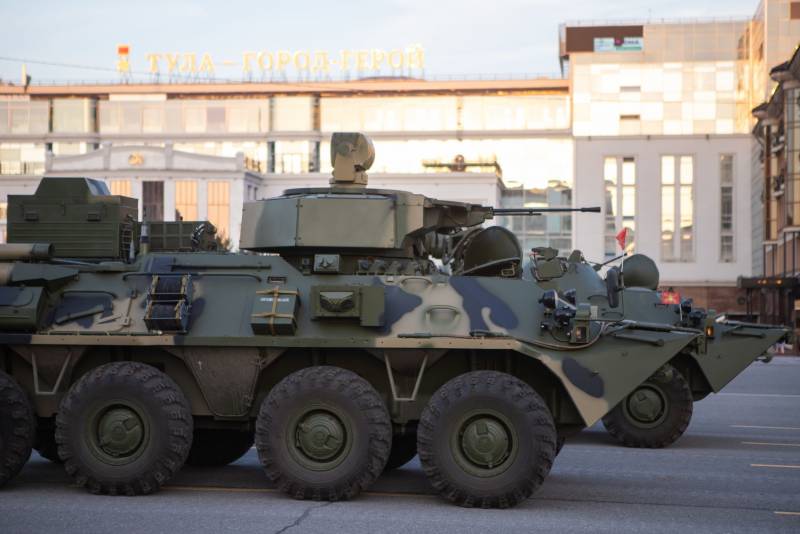 On the forehead of the vehicle, in front of the commander’s hatch, instead of the standard searchlight, an optoelectronic unit is installed, which replaces the standard periscope and provides a better view in any conditions. On the sides there are devices of unclear purpose, probably side-scan sensors.

In place of the standard tower, a unit of a different shape with a different composition of equipment was installed. The new tower has a complex forehead, as well as developed side and stern niches. A large-caliber machine gun is installed in the embrasure, next to it – optics for guidance. However, of greatest interest is the product on the roof of the tower. There is a U-shaped platform with a swinging block.

This is probably the main part of the optical-electronic reconnaissance equipment. It can be assumed that this particular block is integrated with the mast from “Gidrosila” and with its help it is raised to a certain height. However, the availability of such functions, as well as the characteristics of the optics, remain unknown.

The mobile reconnaissance posts of the previous models carried small-sized radar stations for monitoring ground objects. The exterior of the new PRP-5 does not indicate the presence or absence of a radar. If such equipment is available, then the antenna device in the stowed position is retracted into one of the casings. However, the antenna may also need a mast for lifting.

At the stern, above the engine compartment of the armored personnel carrier, there is a rectangular casing with a trapezoidal cover. Some pipes are transported on either side of it. The purpose of these units is unknown. 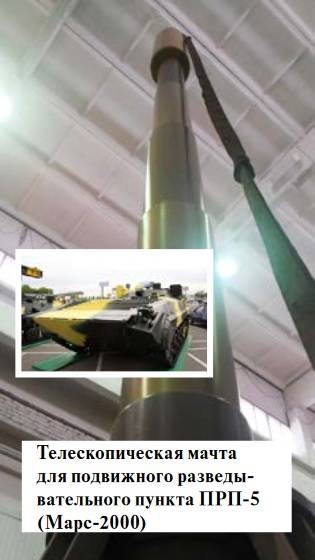 Obviously, the internal volumes of the case are given for certain devices. Required control panels for reconnaissance equipment, as well as communication and control facilities for interaction with headquarters, batteries, etc. However, the composition of such equipment and its exact capabilities are still unknown – and it is unclear when they will be revealed.

A mobile reconnaissance post must be present on the battlefield, monitor the terrain and search for enemy targets. Data on the identified structures, armored vehicles or soldiers are transmitted to the higher headquarters for organizing the strike. Also, a reconnaissance armored vehicle is capable of working as a fire spotter. Modern domestic samples of this class are equipped with day and night optical devices, as well as radar and a developed communications complex.

At present, the Russian army has several types of reconnaissance points, mainly vehicles of the same family – PRP-4 “Nard”, PRP-4A “Argus” and PRP-4M “Deuteriy”. All of them are made on the BMP-1 tracked chassis and have the necessary set of reconnaissance and communication equipment.

The newest PRP-5 “Mars-2000” should retain the basic capabilities of its predecessors, but the use of modern instruments allows to increase key characteristics, and, consequently, work efficiency. It should be assumed the presence of more “long-range” optics and improved radar. Communication facilities should ensure full-fledged operation in existing and future network-centric structures. 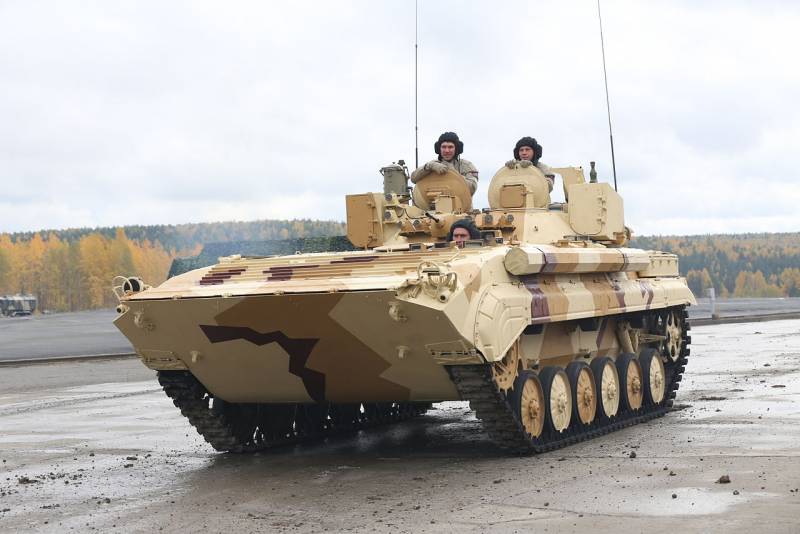 The use of new equipment is of great importance. The ground forces are armed with models and weapons with wider capabilities, requiring special support equipment. Prospective PDPs should look for targets and provide coordinates for both “conventional” and precision weapons.

A significant difference between the PRP-5 and its predecessors is the wheeled chassis. It is more profitable than a tracked vehicle in terms of operation and possible strategic mobility. In addition, the BTR-82 armored personnel carrier is much newer than the BMP-1/2 infantry fighting vehicle, and also remains in serial production. One should also take into account the fact that VPK LLC is developing several models of equipment based on armored personnel carriers at once – this will provide a high degree of unification.

The vehicles of the PRP-4 series retained the standard dome of the BMP-1 turret, which limited the available volumes and forced the armament to be reduced to one PKT machine gun. The new Mars-2000 tower is notable for its large volumes, and due to this it accommodates not only equipment, but also a large-caliber machine gun – a more serious argument for self-defense.

The existing mobile reconnaissance posts, which are in service with the Russian army, generally meet current requirements and effectively ensure the solution of fire missions. However, in the medium term, the products of the PRP-4 line will become obsolete morally and physically, and they will need to be replaced.

A replacement model, PRP-5 Mars 2000, has already been created, built, and is likely undergoing testing. The timing of the completion of the development work, the launch of production and the introduction into service remain unknown. However, the fact that the new car was openly shown at the parade may indicate the success achieved. There are reasons to look to the future with optimism and expect the imminent appearance of “Mars” in the army.