Warheads BLU-109 / B as part of bombs. Photo by US Air Force

One of the typical targets for tactical aviation is a variety of protected and buried structures for various purposes. To defeat such targets, aircraft require special weapons – penetration or concrete-piercing bombs. Such weapons are being developed in several countries and are widely used.

The widest range of penetrating bombs has been developed and manufactured in the United States. Customers are offered several universal warheads with different design features and differing characteristics, which can be used as part of various aerial bombs. Due to this, a good balance of performance and unification is achieved.

In 1985, the BLU-109 / B warhead entered service with the US Air Force. This product had a body 2.4 m long with a diameter of 370 mm with 25 mm walls. Inside the body was placed 240 kg of tritonal and a bottom fuse with a moderator. Modifications were developed with a different explosive or other effect. Thus, the BLU-118 / B product has a volumetric explosion charge that strikes manpower after breaking through a concrete shelter.

Bomb GBU-57A / B MOP and its creators. Photo by US Air Force

Warheads of the BLU-109 / B family of various modifications are used in four types of bombs and on the AGM-130 rocket. When falling on a target with an optimal speed, BLU-109 / B penetrates up to 1.5-1.8 m of reinforced concrete, after which an explosion occurs.

The greatest interest in the concrete-piercing nomenclature of the US Air Force is the GBU-57A / B MOR bomb weighing 13.6 tons, which was put into service in 2012. Its fighting qualities are associated with the use of BLU-127 / B warheads. Such a warhead weighs more than 2.4 tons and carries a large explosive charge. There is a satellite guidance system. Depending on the conditions, GBU-57A / B can penetrate more than 60 m of reinforced concrete. 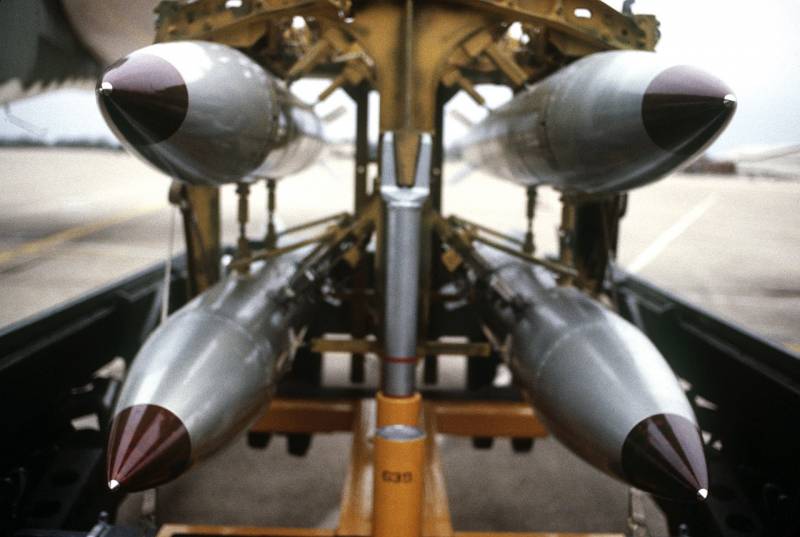 Thermonuclear B61. Photo by US Air Force

In 2016, a new modification of the bomb, GBU-57E / B with increased penetration characteristics, was adopted. The serial production of MOP bombs has been going on since the beginning of the last decade and is not mass production, since the Air Force does not need large quantities of such weapons. In addition, it can only be used from long-range bombers B-52H and B-2A.

The tactical thermonuclear bomb B61 Mod has been in service since 1997. 11. It was made on the basis of the serial B61-7 using a new hardened body. Inside it is placed a charge of variable power, from 10 to 340 kt, controlled by a delayed fuse.

When falling at high speed, the B61-11 bomb penetrates obstacles up to 3-6 m thick. The lack of penetrating power, depending on the type of target and its depth, is compensated by the power of the explosion. A thermonuclear warhead creates a powerful shock wave that destroys objects at depths of tens of meters. 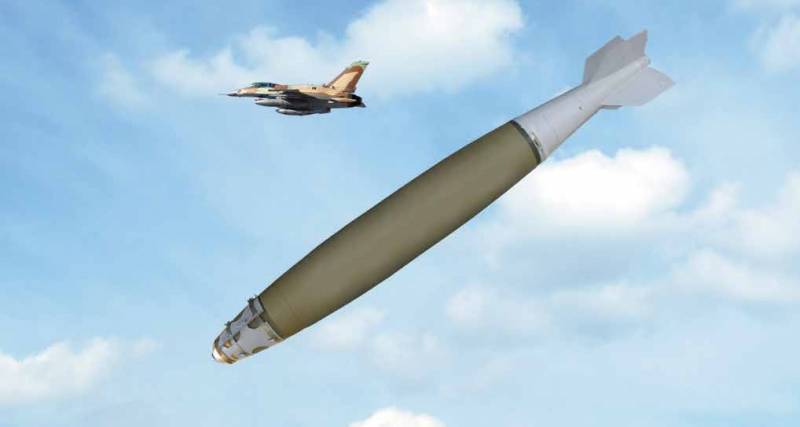 Currently, the US Air Force is armed with six types of conventional warheads for concrete-piercing bombs and one thermonuclear. They are able to punch from 1-1.5 m to 50-60 m of concrete with the subsequent defeat of manpower and equipment of the bunker. With their help, a significant number of bombs are being built with one or another peculiarity. A number of samples of American design are supplied abroad – to NATO partners and non-aligned states.

In the past, the Israeli Air Force had only American-made penetration bombs. In the future, measures were taken to create their own weapons of this class. The first example of this kind was the MPR-500 product from Elbit Systems, presented in 2012. As noted by the development organization, the purpose of the project was to create a bomb with the combat qualities of the American Mk 84 in the dimensions of the Mk 82. In addition, they provided unification with these products on the fuse, guidance systems, etc.

The MPR-500 has a streamlined, reinforced hull with tail rudders. Product weight – 230 kg. There is a satellite guidance system. When accelerating to 330 m / s, the bomb is capable of penetrating up to 1 m of reinforced concrete or 4 floors between floors. After breaking through the obstacle, a continuous defeat of manpower is ensured within a radius of 23-25 ​​m with the scattering of individual fragments up to 80-100 m. 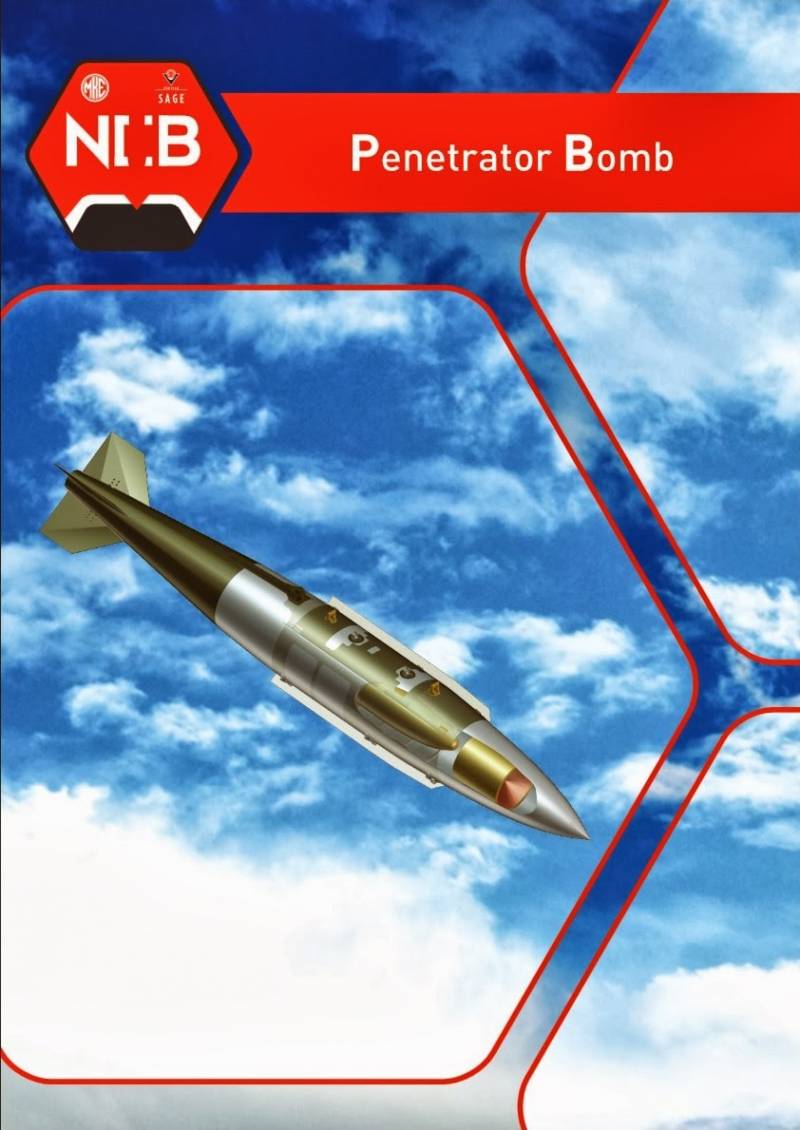 The Elbit MPR-500 product is mass-produced and supplied to the Israeli Air Force. Cases of the combat use of such weapons have been reported. Details are unknown, but high accuracy and effectiveness against protected objects is indicated.

Turkey presented its first version of a concrete-piercing bomb in 2016. TÜBİTAK SAGE has developed the NEB product. The penetrating warhead has a length of 2.6 m and a diameter of 457 mm. Weight – 870 kg. The warhead of the NEB type has two charges. Under the nose fairing is the leading cumulative PBXN-110 with explosives, providing initial target penetration. Behind it is the main hardened case with a high-explosive charge of the PBXN-109 composition. A block with control and guidance equipment is connected to the tail section of the warhead – Turkish or foreign-made blocks are offered.

In the Turkish Air Force, the NEB aerial bomb should be used by F-4E / 2020 fighter-bombers. The minimum penetration of a warhead with two charges is declared at 2.1 m of reinforced concrete. The main charge ensures the defeat of manpower behind an obstacle within a radius of tens of meters. 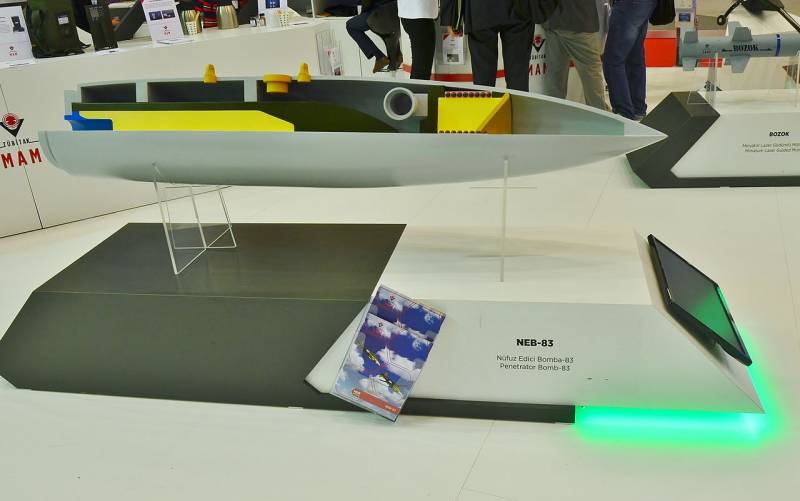 In 2016, the NEB bomb entered service with the Turkish Air Force and, probably, went into series. There is no information about the production, its volume and cost. The use for real purposes was also not reported.

In recent decades, the Russian Aerospace Forces have received several types of concrete-piercing bombs with different characteristics and capabilities. Products with different equipment are capable of effectively hitting both buried structures and runways. In addition, compatibility with all modern frontline strike aircraft is ensured.

The BetAB-500 air bomb is a 2.2 m long product, 330 mm in diameter and weighing less than 480 kg. Inside the thick-walled body with a strong head part, 76 TNT is placed. On its basis, the BetAB-500U product was created, which is distinguished by the presence of a rocket booster. A solid propellant charge is placed in the tail part of its hull, which provides acceleration when falling. Due to the introduction of the accelerator, the length of the bomb increased to 2.5 m, the mass – up to 510 kg, but the explosive charge was reduced to 45 kg. 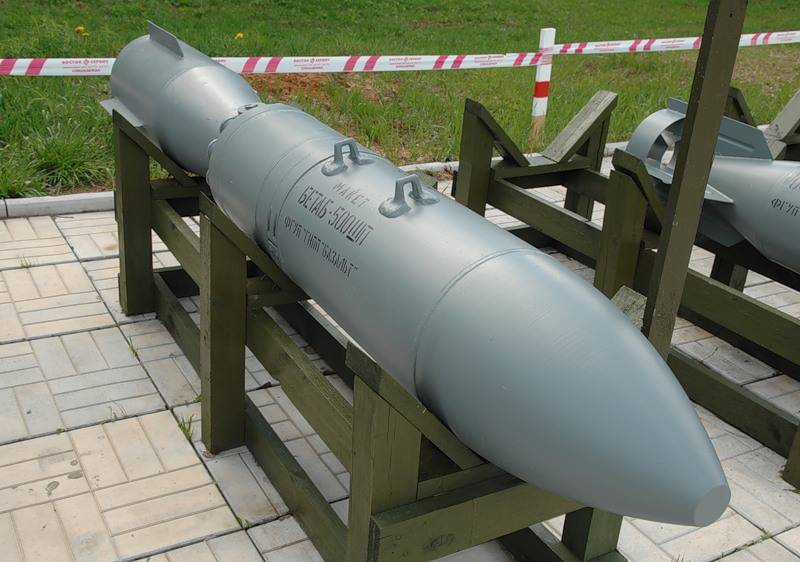 Gaining speed when falling, BetAB-500 (U) bombs are capable of penetrating more than 1.2 m of reinforced concrete and over 3 m of soil. The base BetAB-500 must be dropped from high altitudes. A product with an accelerator is applied from a height of 150 m – then it independently develops the required speed.

A specialized “assault” concrete-piercing bomb BetAB-500ShP has also been developed. Due to its special design, it shows increased efficiency against runways and other similar structures. This bomb is slightly longer than the other products and weighs only 424 kg and carries 350 kg of TNT. The bomb is equipped with an accelerator and a parachute. After the drop, a parachute is thrown, providing braking and giving the aircraft time to leave the danger zone. The accelerator then accelerates the bomb. BetAB-500ShP penetrates at least 550 mm of reinforced concrete, and when blown up, leaves a funnel with a diameter of 4-5 m.

Penetrating (concrete-piercing) bombs in their current form appeared during the Cold War in connection with the active construction of buried and underground structures for the placement of tactically and strategically important objects. To combat them, new aircraft weapons were needed, nuclear and conventional. A number of samples of that time, as well as newer products of the same ideology, still remain in service. 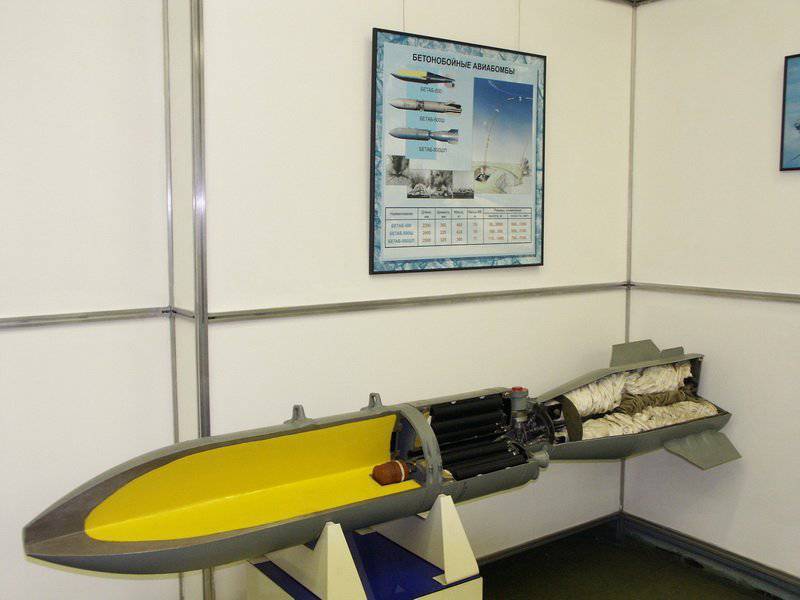 In the course of current local conflicts, bunkers are not a common and frequent target for airstrikes. Nevertheless, concrete-piercing bombs are not only preserved in arsenals, but also continue to develop. It was in recent years that the most powerful samples were created, and the list of developers of such weapons was replenished with new countries. Some of them, as far as is known, even used such bombs in real operations.

Thus, concrete-piercing bombs, despite the limited range of tasks to be solved, remain an important component of the arsenals of the developed Air Force and will retain this status in the future. This means that the production of existing samples will continue, and new ones will come to replace them.