One of the few surviving photographs of the Morris Salamander armored car. Photo Strangernn.livejournal.com

In 1940, Brigadier General Vivienne W. Pope, inspector of the Royal Armored Corps, proposed the development of a promising light armored vehicle capable of replacing existing motorcycles with a sidecar and a machine gun. On this proposal, two projects were developed, one of which remained in history under the name Morris Salamander.

In the pre-war period, armed motorcycles became widespread in the British army – they were used for reconnaissance, as communication vehicles, etc. In general, this technique suited the military, but it did not go without complaints and claims. First of all, the crews were not satisfied with the lack of any protection, which made it difficult to work on rough terrain and threatened in battle.

In this regard, General W. Pope proposed to develop and adopt specialized light armored cars that can replace motorcycles. The concept involved bulletproof armor, armament in the form of a single machine gun and a crew of two. The minimum cost of a serial car was specially negotiated.

Automobile companies Hillman and Morris Motor Limited expressed their desire to create a new armored car. The latter soon presented a project called Salamander (“Salamander”). Morris already had experience in the development and construction of wheeled armored vehicles, which helped to a certain extent in the new project.

On the existing base

Earlier in the year, Morris introduced the Light Reconnaissance Car (LRC) light reconnaissance armored vehicle. In the future, he received approval and went into the series. Already in 1940, the first proposals for the development of the LRC appeared, and one of the machines based on it was supposed to be the light “Salamander”.

The new light armored car was made on the basis of the modified LRC chassis. The existing frame was shortened, but the arrangement of the units remained the same. This made it possible to reduce the required dimensions of the armored hull, as well as to reduce its weight and internal volumes in accordance with the new requirements. At the same time, the main units of the machine remained the same.

The Morris Salamander was powered by a 30 hp 4-cylinder petrol engine. The mechanical transmission delivered power to the rear drive axle. According to other sources, it was possible to introduce four-wheel drive. The chassis included two axles with vertical spring suspension. The engine, transmission and chassis were borrowed practically unchanged from the LRC armored car. 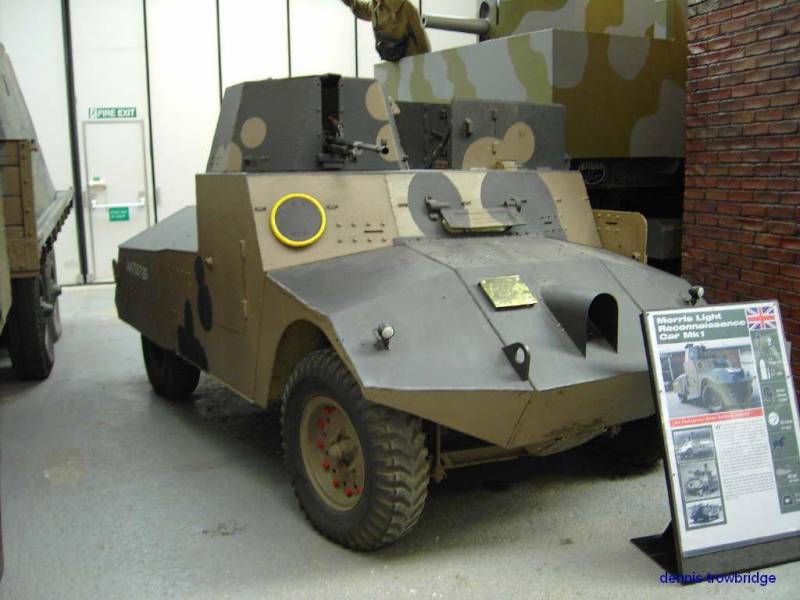 An original riveted armored body of reduced dimensions with protection at the LRC level was developed. The frontal projection was protected by sheets with a thickness of 14 mm, armor with a thickness of 6-8 mm was used in other areas. The hull with a characteristic “nose” had a single habitable compartment for the driver and gunner. Behind the fighting compartment was an armored engine casing with a stern grille. An important feature of the hull was its small cross-section. In fact, the hull was built with the “compression” of the crew and power plant.

A polygonal turret without a roof was placed on the roof of the armored car. Light wings of a simplified design were installed over all the wheels. On the sides, at the level of the wheels, there were boxes for property. There was the necessary lighting equipment on the forehead. The sides received eyelets for the installation of additional equipment.

The Salamander crew consisted of two people – like a motorcycle. The driver was placed in the front of the hull and could observe the road through a hatch in the frontal sheet and cracks in the cheekbones. Behind him was the gunner commander, who used a machine gun. The vehicle was accessed through a door on the starboard side or through an open turret. Communication means, internal and external, were absent.

The armament of the armored car consisted of one Bren machine gun. In the fighting compartment next to the commander there were racks for ammunition in box magazines. The design of the turret provided circular shelling and fire with significant elevation angles.

The Salamander armored car could move on highways and rough terrain, overcoming small obstacles. To overcome water barriers, special pontoons were developed. Two such units were attached to the sides of the vehicle using pipes with locks. Movement was proposed to be carried out by rotating the driving wheels; the steering functions were assigned to the steered wheels.

In 1940, the Morris company was engaged in the development of serial production of LRC armored cars, which significantly influenced the implementation of the Salamander project. Development and construction dragged on, and it was possible to bring the prototype vehicle of this type to testing only by the end of the year, and the main checks took place already in 1941. For some time now, the Salamander has been tested in conjunction with the Hillman Gnat product, comparing two samples. 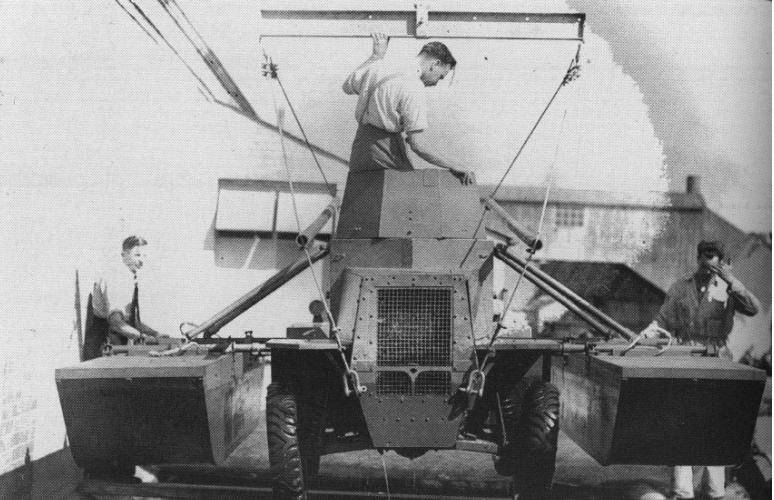 The chassis on the existing base proved to be good, but it was not without claims. The Morris Salamander armored car moved confidently along the highway and rough terrain. Under certain restrictions, obstacles were overcome. However, on rough terrain, chassis performance without all-wheel drive dropped sharply. Experiments with the installation of pontoons are known, but there is no information about actual tests on water.

The booking was deemed sufficient. At the same time, the likelihood of hitting the vehicle was reduced by reducing the frontal and side projections. Armament was also found acceptable. From these points of view, the Salamander armored car looked very good – especially against the background of the motorcycles that it was supposed to replace.

The ergonomics of the habitable compartment were sharply criticized. The car was too cramped: boarding, disembarking and working were difficult and inconvenient. Moreover, in emergency situations, such design features directly threatened the lives and health of the crew.

In general, the prospects for the Morris Salamander project were already determined based on the results of the first tests. Nevertheless, for some time, new tests were carried out, and two promising armored cars retained the theoretical chances of entering service. However, the command treated them without enthusiasm and was not going to make a positive decision.

In fact, everything was decided in October 1941. The initiator of the project, General V. Pope, died, and promising armored cars were left without support. At the beginning of the next year, the two products were reviewed again – and this time the final decision was made. Both projects were closed due to the dubious ratio of positive and negative qualities, as well as due to the lack of real prospects.

After this decision of the army, the two car companies returned to their previous projects. Hillman focused on the production of Tilly light trucks, while Morris continued the already established production of LRC armored cars. The latter were built until 1944, and in a few years more than 2,200 vehicles rolled off the assembly line. In addition, various specialized armored vehicles were developed and tested, but none of them went into series.

Thus, the two projects of light armored cars did not progress beyond testing and did not lead to the replacement of army motorcycles. However, they allowed British industry to explore opportunities and identify real prospects for an interesting direction – as well as draw conclusions and focus on more rewarding projects.