Ka-27 naval aviation of the Navy. Photo of the Ministry of Defense of the Russian Federation

Several years ago it became known about the beginning of work on a promising helicopter for carrier-based aviation with the code “Lamprey”. Subsequently, the project went through early stages, and now development work is open. The prototype helicopter is expected to appear in a few years.

From ideas to the project

The first information about the development of a new multipurpose helicopter appeared in 2015, at the same time the code “Lamprey” became known. Some sources used the unconfirmed Ka-65 cipher. In the future, it was repeatedly reported about the implementation of certain works, the development of individual components, etc. By mid-2019, preliminary design was completed.

In February 2020, the management of the Russian Helicopters holding announced new details of the ongoing work. At that time, aircraft manufacturers and the military department were coordinating the terms of reference for the future helicopter. As a result of these events, the opening of the ROC was expected – this year.

An agreement on the development of a technical project for the Lamprey was signed at the end of August as part of the Army-2020 military-technical forum. By this time, the appearance of the future helicopter was formed and the terms of reference were approved. The design was entrusted to the National Center for Helicopter Engineering named after V.I. Mil and Kamova. The first stage of the ROC is given three years. 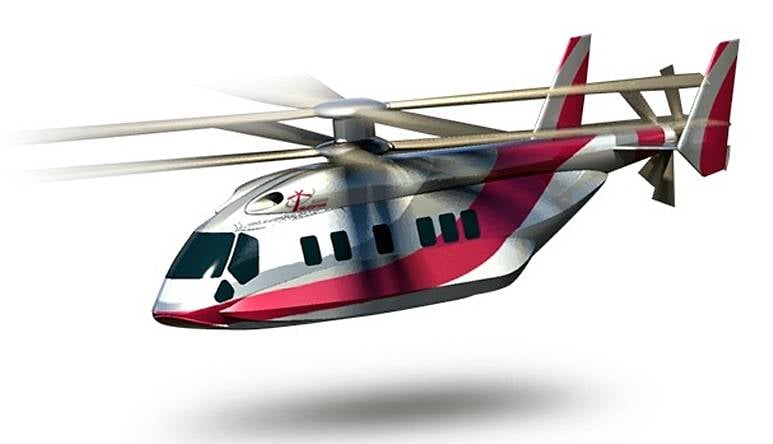 One of the concepts, presumably, of the Lamprey helicopter. Graphics Bastion-karpenko.ru

At the end of September, the general director of Russian Helicopters, Andrei Boginsky, gave an extensive interview to RIA Novosti, in which, among other things, he spoke about the prospects of the Lamprey. He noted that it usually takes 5-7 years from the start of development to the first flight of the helicopter. He expects the appearance of an experienced helicopter according to the new ROC and the start of hover tests in 2025-26. Technical details were not disclosed.

The goal of the Lamprey project is to create a promising multipurpose helicopter for the Navy’s aviation. Such a machine in the future will have to replace the existing Ka-27 of all modifications, now performing various tasks. In the early stages, the design of the helicopter was carried out by Kamov. It was claimed that she was using all her competencies accumulated over the past 50 years. After recent transformations, the design will be carried out by the joint NCV.

The exact shape and functions of the future “Lamprey” have not yet been disclosed. In this case, there is information about the use of certain components. In addition, at exhibitions and in various presentations, “unnamed” layouts and concepts were demonstrated that may be relevant to the new project. Last year, a photo was made publicly available, which allegedly shows an unfinished full-size model of the Lamprey. All this allows us to imagine the approximate appearance of the future deck helicopter and evaluate some of its characteristics.

The mock-ups demonstrate a helicopter with a pine design with two turboshaft engines and a developed tail unit. A large cargo-passenger cabin with a ramp under the tail boom is envisaged. On the sides of the fuselage there are sponsons accommodating the main landing gear and other units. Outwardly, this “Lamprey” is similar to the Ka-27 and other Kamov helicopters, but differs markedly from them. 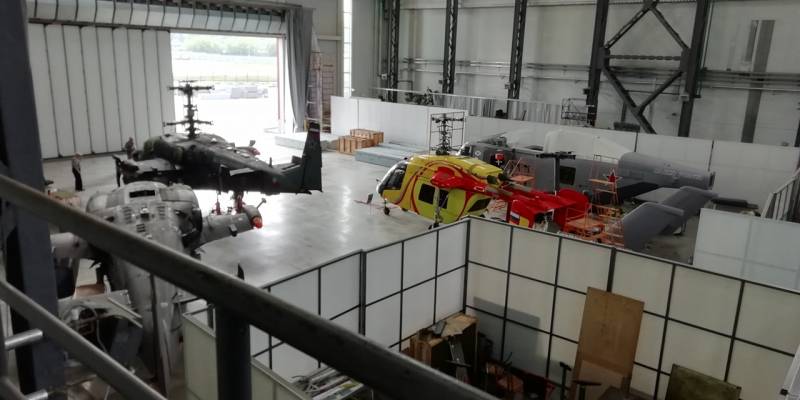 Photo from the assembly shop. In the background, presumably, a model of the Lamprey. Photo Aviaforum.ru

The power plant of the Lamprey should include two turboshaft engines TV7-117VK developed by JSC Klimov. Maximum take-off engine power – 3000 HP, extraordinary – 3750 HP. The engine is controlled by a digital automatic system BARK-6. R&D work on the new engine began in 2015 and was to be completed in 2020.

Already in 2016, it became known about the development of a part of electronic equipment. The Nizhniy Novgorod NPP Polet (United Instrument-Making Corporation) has created a communications complex for the Lamprey. It was indicated that this is a completely new digital equipment that ensures the full integration of the helicopter into automated command and control systems. The complex will provide voice communication and data transmission of various kinds. Means of automatic tuning, self-diagnostics, etc. are provided. Due to a number of innovations, the immunity to interference and the level of protection of the transmitted information will increase.

The new helicopter in terms of its dimensions and weight will correspond to the limitations of ship hangars and take-off sites. From this point of view, it will not fundamentally differ from the Ka-27 or other domestic deck helicopters.

“Lamprey” is created as a replacement for the existing machine, which determines the minimum required range of tasks to be solved. Ka-27 exists in anti-submarine, transport-combat and search-and-rescue modifications – each of them provides for its own set of equipment. Lamprey should have similar equipment and the same functions. In addition, it was proposed to create other modifications, for example, landing. 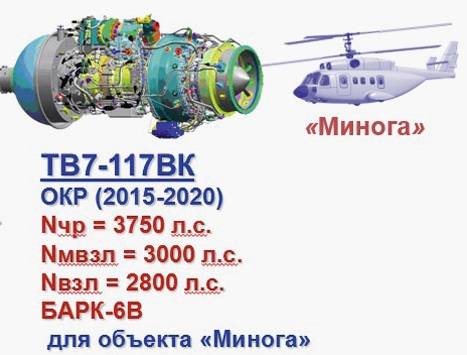 TV7-117VK engine. Nearby is a possible appearance of a helicopter. Graphics Bmpd.livejournal.com

In the past, Russian Helicopters mentioned that the new project is considering the possibility of creating a universal machine with a quick restructuring for certain tasks. Probably, it was about the modular architecture of the target equipment. Officials also talked about the possibility of creating an unmanned modification. The list of versions and variants of the Lamprey should be determined by the customer.

The new helicopter is being created taking into account the weight and size restrictions imposed by the shipbuilding standards. This can make it difficult to design, but will provide simple and efficient operation. All domestic ships capable of receiving the Ka-27 or other vehicles will be able to carry the new Lamprey. A wide range of ships has such capabilities – from a corvette to an aircraft-carrying cruiser.

In the distant future, the Lampreys will be able to enter the aviation group of the 23900 universal amphibious assault ships. Each such UDC will be able to carry up to 16 helicopters of various types, including transport-combat, amphibious and attack helicopters. In the future, a decision may be made to build an aircraft carrier – such a ship will also not do without multipurpose helicopters.

The exact dates for the completion of the R&D work on the Lamprey have not yet been announced; the management of Russian Helicopters gives only rough estimates. However, the forecasts of past years and recent times look realistic and can be taken into account, but only until accurate information appears. 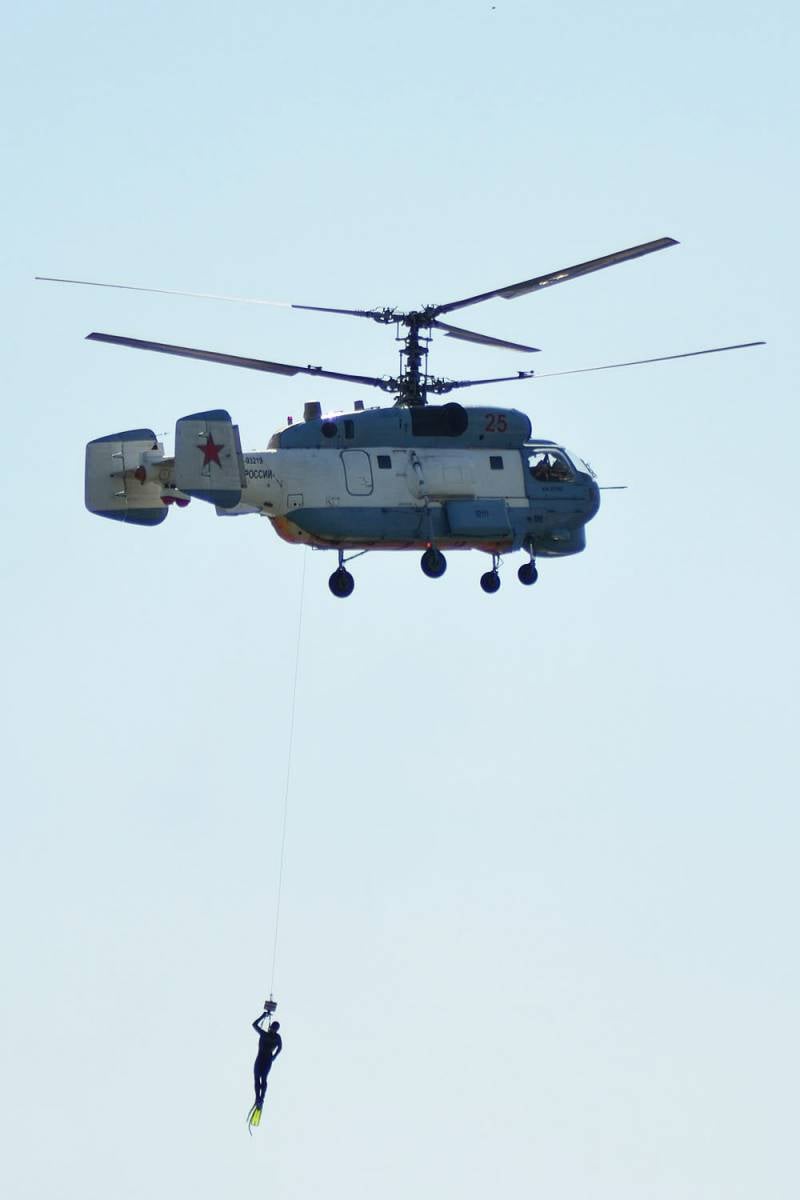 Search and rescue of the victim by Ka-27PS. In the future, such tasks will be solved by “Lamprey”

It took about five years for research work with the formation of a technical appearance and the subsequent development of technical specifications for the “Lamprey”. The technical design will take about three years, after which two years will be spent on the construction of a prototype and its preparation for the first flights.

Such a time frame does not seem impossible. NTsV them. Mila and Kamova, as well as related aircraft manufacturing enterprises, have extensive experience and are able to cope with the assigned tasks for several years. Accordingly, in 2025 or a little later, flight tests may begin. The start of serial production in the past was attributed to 2027-28, and this is also real.

Thus, the processes of updating the Russian Navy continue and cover all major areas. Ships and vessels are being built, incl. fundamentally new classes, and in parallel, measures are being taken to modernize naval aviation. Now one of its foundations is the Ka-27 of all modifications, but at the end of the decade they will begin to give way to the newer Lampreys. These measures will have a noticeable impact on the general condition and potential of the Navy – although they will have to wait for several years.