The Estonian company Milrem Robotics, widely known for its universal robotic platform THeMIS, is working on a new combat complex. RTK Type-X is at the design stage, but this year it is planned to build and test the first prototype. Unlike its predecessor, the new Type-X will belong to the heavy class and will be able to carry a full range of weapons.

The development of a new heavy RTK was announced a few weeks ago, in early April. A promising project with the working title Type-X provides for the construction of a tracked autonomous combat armored vehicle with the ability to work on operator commands. It is expected that such a sample will show significant advantages over the current “manned” technology and can replace it in some situations.

Milrem Robotics management noted that the new project already has a starting customer. The armed forces of an unnamed country became interested in the heavy RTK and almost completely paid for its development. In the future, new orders from other countries are expected.

In early April, it was reported that the development of the project was coming to an end. Separate components of foreign production have already been ordered. In the near future it was planned to import them into Estonia and use them in the construction of an experimental RTK. The assembly of the prototype is going to be completed by the beginning of autumn, and then start testing.

The development company believes that it will take about three years to continue work, testing and fine-tuning, as well as obtaining the necessary permits. Only after that it will be possible to start mass production in the interests of certain customers.

On May 25, the Defense Update published new information about the project received from its developer. The timing of the appearance of experimental equipment has been clarified, and the main technical features have been disclosed. The completion of construction of the Type-X prototype was shifted to the end of the 3rd quarter of this year, after which factory tests will begin.

The Type-X project provides for the construction of a modular tracked AFV with maximum process automation and remote control. The possibility of installing various combat modules and towers is offered, incl. with anti-tank or anti-aircraft weapons. In the future, it is possible to create a new modification without armor and weapons, adapted for use in various commercial organizations.

Type-X will be able to solve a wide range of combat missions determined by the operator. With the help of this RTK, it will be possible to conduct reconnaissance, provide fire support, accompany convoys, etc. In some situations, this technique will have advantages over conventional armored vehicles.

The concept of a mobile control center for several RTKs

The basis of the RTK Type-X is a medium-sized tracked platform with a curb weight of 9 tons; payload, incl. in the form of a combat module – 3 tons. The chassis must have an armored body with anti-bullet and anti-fragmentation protection. On board such a machine, there is a power plant, communication and control facilities, navigation, etc. Product length – approx. 6 m. Height – approx. 2.2 m.

RTK Type-X will receive a hybrid power plant based on a diesel generator and electric motors with batteries. Diesel and traction motors are located in the aft compartment; the nasal volume is given under the accumulators. The undercarriage receives seven independently suspended rollers on board. The design speed of the car on the highway reaches 80 km / h, on the ground – 50 km / h. The power reserve is 600 km.

The chassis provides for the installation of a set of television and thermal imaging cameras for a circular view, lidars and other sensors. The information from the sensors is collected by the on-board computer, which creates a map of the area and controls the movement. Depending on the task, the RTK will be able to move independently or at the operator’s commands. In both cases, the direct control of the systems falls on the automation.

The first to be developed is a combat version of the Type-X, equipped with a turret with a cannon and machine gun armament. The two-ton combat module should carry an automatic cannon of 30 or 50 mm caliber, a rifle caliber machine gun and smoke grenade launchers. To search for targets and control fire, the use of a panoramic sight is provided.

In the future, the appearance of other combat modules with one or another weapon is possible. The issue of creating a self-propelled anti-aircraft complex, mortar or radar is being considered. The refusal of additional equipment is also possible, as a result of which the robot becomes a vehicle for people and goods. This version of the complex may be of interest not only to armies, but also to civilian structures.

The RTK Type-X will include an operator console equipped with large-format monitors and the necessary controls. Depending on the needs of the customer, the console can be installed on any platform. In particular, a project is being developed for a mobile control center based on an armored personnel carrier. The troop compartment of the armored personnel carrier can accommodate up to four workplaces – this will allow you to control a whole group of robots.

Milrem Robotics believes that their new Type-X RTK has a great future and will find its place in the market. This opinion is already confirmed by the presence of an order from one of the armies and its financial support. New orders are also expected. The development company believes that in the future, robotic systems will become more widespread, and this predetermines the prospects for current developments.

The key feature of the Type-X is called a combination of three factors: a hybrid power plant, autonomous operation and no crew. In this respect, the new Estonian RTK looks more successful than other modern developments. 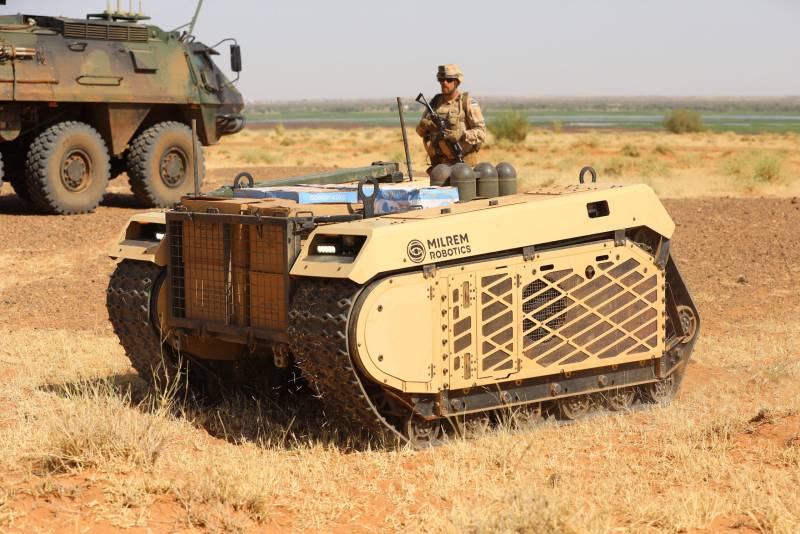 An interesting comparison with the traditional technique is offered. Thus, the Type-X armored fighting vehicle turns out to be three times lighter and half the price of an average modern infantry fighting vehicle with similar running and combat characteristics. At the same time, the robot has a reduced profile, which increases its survivability. The reduced mass reduces the requirements for military transport aircraft, increasing strategic mobility and providing the ability to parachute landing.

Complex for the future

The promising RTC Type-X project from Milrem Robotics is at the forefront and provides for the use of a number of promising ideas. Due to this, it can be of some interest to potential customers. Moreover, according to the development company, while the technology being developed has already found a buyer.

The strengths of Type-X include modular architecture, which provides the ability to build samples for various purposes, a developed electronic complex, limited size and weight, as well as flexibility of use and the ability to solve a wide range of tasks. Such a RTK can really find application in various fields and give the desired results.

However, the project may face serious difficulties. The main ones are related to ensuring effective autonomous work. The complex must independently determine the features of the terrain and carry out some operations without the intervention of the operation. Also, reliable algorithms for automatic tracking of the situation, detection and tracking of targets are needed.

The ability of the developer company to establish full-scale serial production with the delivery of a large number of equipment in a limited time raises questions. It is now clear that the assembly of a prototype, incl. with the involvement of foreign suppliers, it will take several months. How quickly they will be able to build serial products is unclear.

Despite all the complexity, the prospects for the Type-X project can be viewed in an optimistic manner. Milrem Robotics has extensive experience in the development of robotic systems and was able to interest a number of countries with its products. By now approx. 10 armies of NATO countries have purchased the THeMIS RTK in different configurations for testing and evaluation. This technique performs well and gets high marks.

The developments on the THeMIS platform in finished or modified form could be used in a new project of the Type-X AFV – with good results. In addition, as follows from the messages of the developer company, the promising RTC uses imported components, possibly from leading manufacturers. This, too, can have a positive impact on overall performance and capabilities.

In general, the Milrem Type-X project looks quite interesting and may have good prospects. The direction of robotic systems in the form of armored combat vehicles is actively developing by the forces of several countries, and the results of this development attract the attention of the armies. The new Estonian development has already found its buyer, and it may not be the last one.