MBT of the third generation “Type 99A”. Photo Wikimedia Commons

In recent decades, Chinese industry has developed a number of main battle tanks and re-equipped the army. It is obvious that right now the development of a completely new MBT can be going on, incl. belonging to the next generation. However, official information about this project – if it exists – has not yet been published. There have been only a few leaks of information that can be associated with a hypothetical project.

At the end of the eighties, China adopted its first tank of the 3rd post-war generation, the Type 88. It is believed that soon after this, specialized enterprises began working on the issues of creating the next generation MBT. However, this was not officially reported, and all data on such works came only from foreign sources.

According to their information, since 1992 the MBT project “9289” has been developed. The design went on for several years and stopped in 1996 for unknown reasons. In the late nineties, a new project was launched with the index “9958”, the result of which, it is believed, was a real experimental tank. The prototype, known as CSU-152, was allegedly built and tested in 2003. The foreign press cited some technical aspects of the project, but later on, no new data was received. A variety of explanations can be found for this. 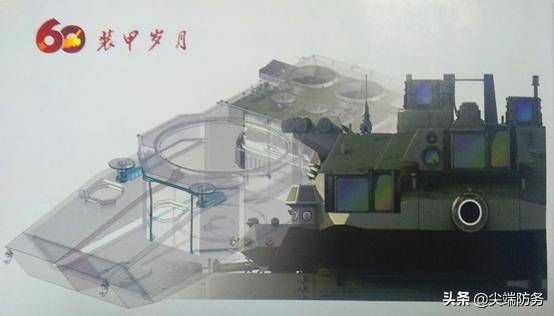 It is curious that during the period of the proposed development of the 4th generation MBT, the PRC developed and put into series several machines of the previous, third. So, until the mid-nineties, the production of Type 88 continued in various modifications, after which the more advanced Type 96 was put into the series. By the beginning of the 2000s, a promising Type 99 tank was created, which is still being produced and has undergone several upgrades.

Thus, despite all the expectations of foreign experts and the specialized press, China does not speed up work on the next generation of MBTs and is not in a hurry to create fundamentally new machines. At the same time, the development of the current 3rd generation continues, aimed at obtaining maximum results.

The first technical details of the new generation Chinese project became known only a few years ago. Jane’s published data on the CSU-152 tank obtained from its sources. In this case, it was only about the most general design features, but not about the exact characteristics or the course of the project.

The proposed interior of the habitable compartment. Photo Club.6parkbbs.com

Jane’s wrote that the CSU-152 has a traditional layout, but can get an uninhabited fighting compartment. Enhanced protection of the frontal projection based on combined armor was expected, incl. with ceramic or uranium elements. The use of dynamic protection was not excluded. The main armament was considered a new 152-mm cannon with an automatic loader and a modern fire control system. The use of an uninhabited tower and a separate habitable compartment made special demands on the electronic equipment.

In the future, new messages about the technical features of the MBT CSU-152 did not appear. Moreover, even the very existence of this project has not been clarified. It is very likely that new information will never appear – unless China suddenly and unexpectedly decides to talk about its experimental tanks.

At the end of last year, new information appeared in the Chinese media about the development of a promising tank. For the first time, they showed the possible appearance of a certain unknown machine, namely, some of the external elements, the layout of the units and the interior of the habitable compartment. The shown MBT resembles advanced foreign developments and is of great interest.

An unknown tank developed by one of the enterprises belonging to NORINCO has a layout uncharacteristic for Chinese projects with a front control compartment and an isolated uninhabited fighting compartment. In this regard, the tower houses a large number of optoelectronic devices for various purposes – with their help, an overview and guidance of weapons is provided.

The crew in their seats. Photo Club.6parkbbs.com

Of greatest interest in last year’s staff is the appearance of the department of management. Shown are two crew positions. At the disposal of tankers there are three LCD screens, a center console and other consoles, as well as periscopes for forward viewing. On the left (probably the driver’s seat) there is a characteristic steering wheel. On the right is the gunner using a traditional-looking remote control. Perhaps the crew also includes a commander, whose place is located behind other tankers. At the same time, the diagram shows that the control compartment has only two hatches.

What exactly was shown in these frames is unclear. This may be the result of a theoretical study of the appearance of a promising MBT, “fantasy on a theme” or materials on a real project. Perhaps the situation will become clearer in the future.

This spring, images of a “concept” called MBT-2020 appeared on Chinese resources. Apparently, these are unofficial drawings, but they are based on previously published materials. Thus, a tank with an isolated control compartment and an uninhabited turret is shown. In addition, the previously published appearance of the MBT was supplemented with hinged protection modules, lattice screens and other components.

Thus, a very interesting situation takes place in the Chinese tank building industry. It is obvious that at present the leading enterprises of the industry are working on the development of existing armored vehicles and at the same time are working on issues of further development of the direction. Preliminary work in this area, according to foreign data, started almost 30 years ago and could already create a technological groundwork for real projects. 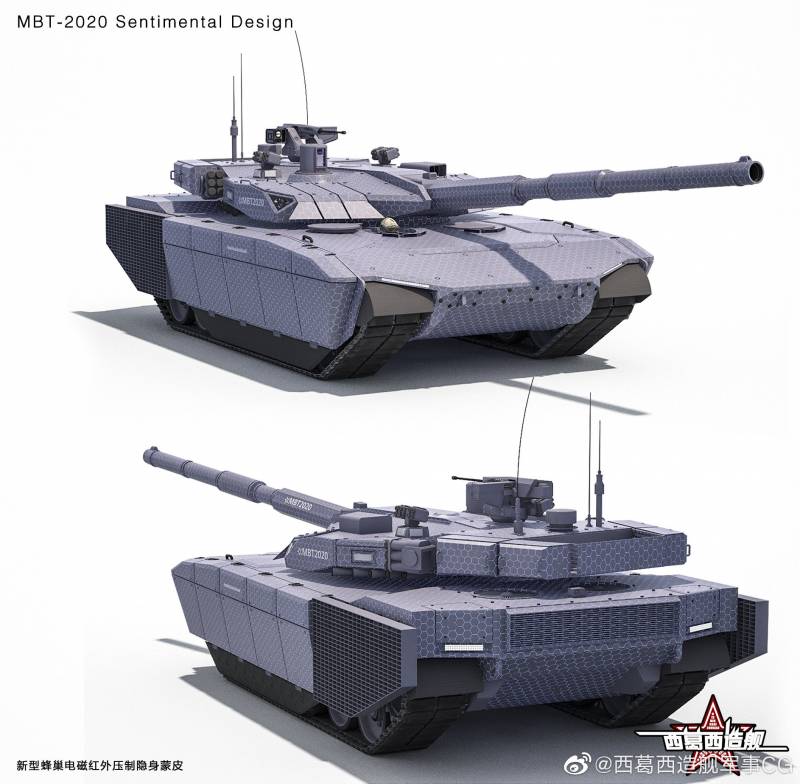 However, the research or design of a real MBT for the army has not been reported. The PRC very rarely talks about promising projects at the development stage and prefers to show ready-made samples. It follows from this that the process of creating the next generation tank is unlikely to have advanced beyond development work. Accordingly, the Chinese army does not yet have to count on updating its tank fleet.

However, there are reasons for optimistic forecasts. Since the end of the nineties, Chinese tank building has been demonstrating a good pace of development, and also regularly confirms the desire and ability to narrow the gap with world leaders. With the use of modern developments and technologies, the development of existing tanks is carried out, as well as new samples of the 3rd generation are being developed. Work on the next 4th is also very likely.

When a fundamentally new Chinese MBT will appear and what it will be is unknown. It is obvious that sooner or later such an armored vehicle will go into service and strengthen the PLA’s tank units, providing advantages over a potential enemy. In the meantime, the army for an unknown time will have to use the existing tank fleet, combining modern and outdated samples.