The current state programs for the development of weapons, designed for long periods, provide for the massive purchase of various models for all types of troops. A special place in these programs is occupied by the purchase of combat and combat training aircraft for the air force and naval aviation. In recent years, very remarkable results have been obtained in this direction and a foundation for further modernization has been created.

According to open data, in the period from 2010 to 2020 inclusive, the Russian armed forces received at least 525-530 training and combat aircraft of new construction – not counting military transport and passenger or equipment of other classes. This is several times higher than the total volume of supplies over the two previous decades. The bulk of the aircraft, more than 490 units, was built and delivered within the framework of the State Program for 2011-2020.

In general, the dynamics of the supply of aviation equipment demonstrated all the benefits of drawing up clear procurement programs and increasing funding for this area. So, in 2010, the army transferred only 16 new aircraft, and in the next 2011 – 19 units. Already in 2012, the volume of deliveries increased to 29 units, and in 2013 the army received more than 60 aircraft. 2014 and 2015 became a record in this respect – 101 and 89 units. respectively. 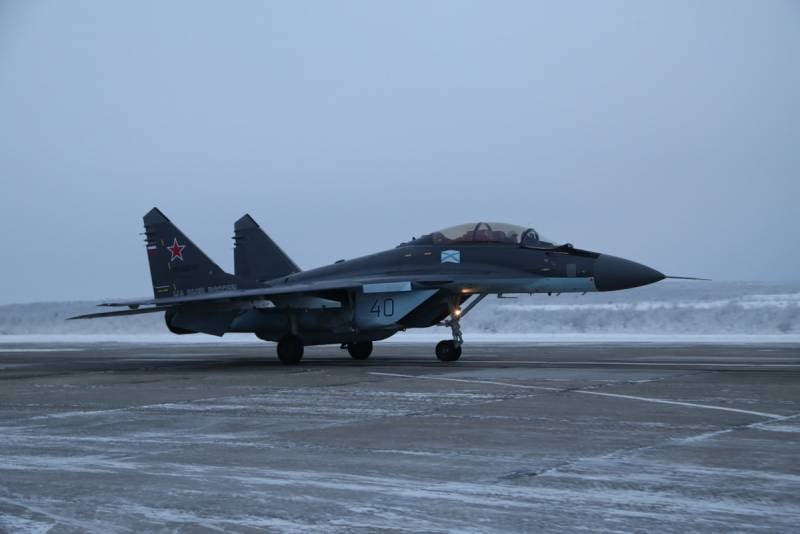 One of the few MiG-29KUB aviation of the Northern Fleet, November 2020

Subsequently, there was a gradual decrease in the total volume of construction and supplies. In 2016, the industry delivered 70 aircraft. In the next two years, volumes remained at 50 units, and in 2019 only 20. Last year, there was a slight increase again.

Such supply dynamics are quite understandable. In the early years of the last decade, the aviation industry completed ongoing contracts that were not in themselves high in volume. The last deliveries for these orders were carried out after the start of the 2020 State Program. In 2011, new large contracts were signed, and in just a couple of years the factories gained the required production rate. This explains the mid-decade records.

Growth in supply volumes in 2013-16 allowed to satisfy the main part of the current requirements of the Air Force and naval aviation, as a result of which, in the future, the rate of production began to decline and gradually returned to the level of 2011-12. However, new growth is expected soon. In 2020, the Ministry of Defense placed several new orders for this or that equipment. Accordingly, the aircraft of these parties will be included in statistics as early as 2021 or later. 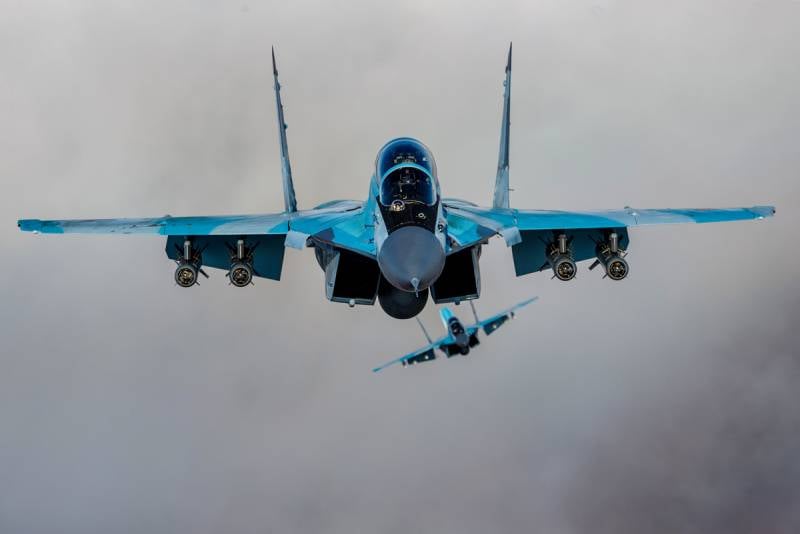 It should be recalled that new combat and training aircraft are produced not only for the needs of our own army. Batches of dozens of machines are regularly handed over to foreign customers. However, according to various sources, the total volume of foreign orders for the period under review is inferior to supplies to the Air Force and the Navy. Thus, the potential of our industry is much higher than what is required to meet the requirements of the army. The benefits of such a reserve of production capacity are obvious.

In 2010-2020. a specific situation was observed with the supply of MiG fighters. Such aircraft remain in service, but their number is small and inferior to the equipment of another manufacturer. In addition, there are still no large orders for the construction of new machines. As a result, over the past 10 years, the army received less than 50 units. MiG-29 and MiG-35 of various modifications. This fact is especially interesting in light of the fact that in 2009 a contract for 34 MiG-29SMT and MiG-29UB aircraft was fulfilled.

From 2010 to 2012, the new MiG aircraft did not enter the army. Only in 2013 were two MiG-29K and MiG-29KUB units delivered. A year later, naval aviation received a second pair of combat training vehicles, as well as eight MiG-29Ks. The last delivery of the “K” modification took place in 2015 – 10 units. Thus, to update the grouping of carrier-based fighters, 20 single-seat and 4 combat training aircraft were built. 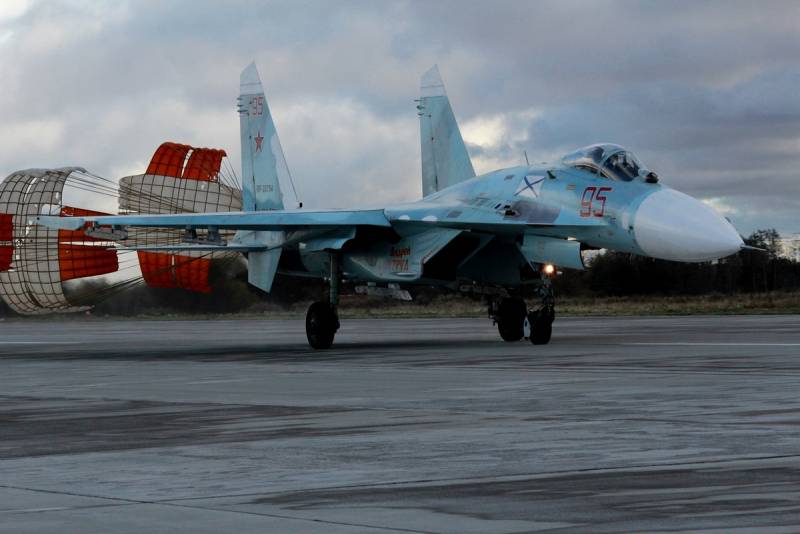 In the same 2015, three new MiG-29SMT and a pair of MiG-29UB entered service. In 2016, 11 SMT vehicles were accepted, and supplies again stopped for several years. In 2019 alone, the industry delivered one MiG-35S and one MiG-35UB. In 2020, three more MiG-35S and one UB were completed. It is expected that the construction of MiG equipment will continue, but its pace will be limited so far.

The bulk of the deliveries of new combat aircraft fell on Su-brand equipment. In 2010-2020. The Air Force and the Navy received more than 370 aircraft of six types. At the same time, some models were produced in a fairly large batch, while others were included in statistics in minimal quantities. For example, the Air Force has so far received only one serial Su-57, and the construction of the Su-27SM was completed back in 2011 due to the appearance of newer modifications.

In 2010-11. the army handed over only four Su-30M2 fighters. In 2013, three more new machines were adopted, and in 2014-16. their fleet has increased by 13 units. Having received 20 of these aircraft, the customer curtailed their production. 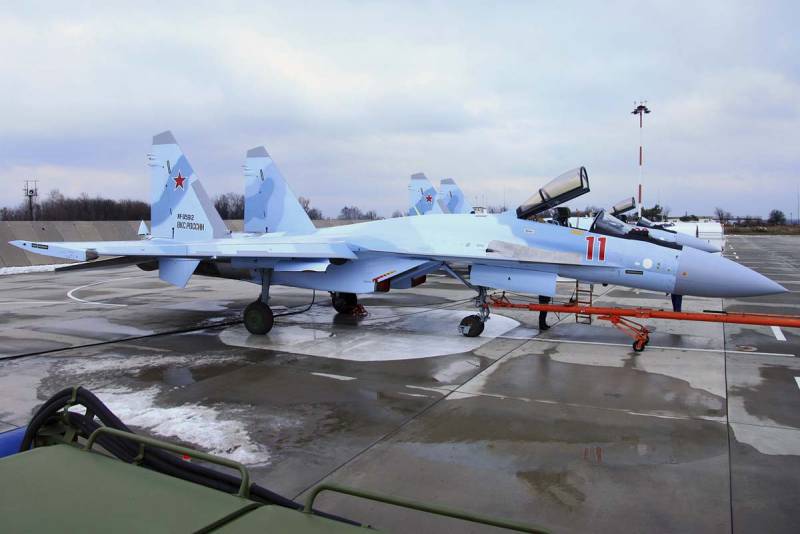 A pair of Su-35S of the last series, transferred to the Lipetsk Aviation Center, November 2020

In 2012, the Air Force received the first pair of the newest Su-30SM, and over the next few years, the pace of production of such machines grew. The maximum was reached in 2015 – 27 units. The last Su-30SM were delivered in 2018, completing a series of 114 units. In the structure of supplies of the last decade, it is the Su-30SM that is the most massive fighter.

In the same 2012, the first two serial Su-35S were delivered to the armed forces. In the next 2013, they passed eight, and then set a record – 24 units. In 2015-16. deliveries were reduced to 12 units. per year, and from 2017 to 2020, 10 cars were handed over. In total, almost a hundred of these fighters were built and handed over to the customer, which in a known way affected the combat effectiveness of the Air Force.

The production of Su-34 bombers occupies a special place in the program of modernization of front-line aviation. It was launched at the end of the two thousandth years, but it was only within the framework of the State Program-2020 that it reached a high rate of deliveries. So, in 2010, the army handed over only four such vehicles in addition to the three previously transferred. In 2011, 6 units were delivered. The following year, 14 aircraft were put into operation, and in 2014-17. received 16-18. In 2018, 12 units were completed; the same amount in total came out in 2019-2020. In total, during the period under review, the Air Force acquired 126 Su-34 bombers, and almost all during the period of the previous State Program.

The Yak-130 combat training aircraft are of particular importance for the Air Force and naval aviation. The first delivery of serial equipment of this type took place in 2009. Then the production continued and gained momentum. 2011 to 2015 the army signed several large contracts for the Yak-130, according to which more than 105 units were delivered to the Air Force and the Navy. technology. 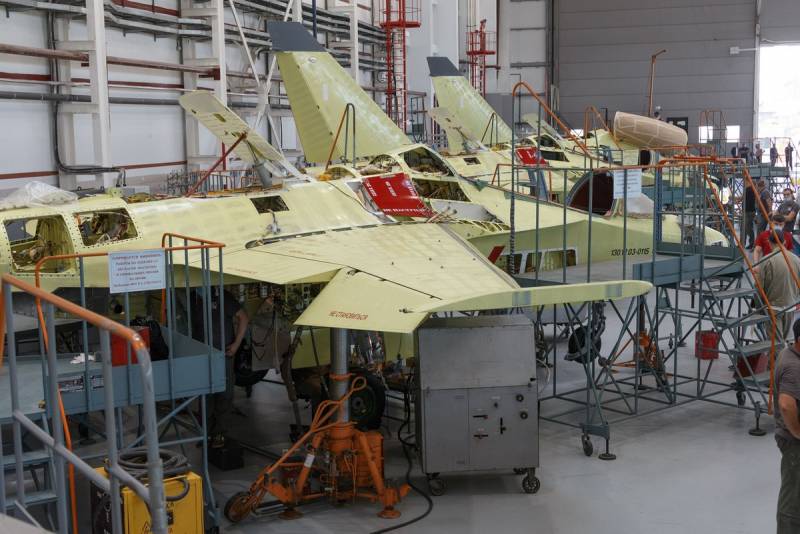 Before the full launch of the State Program-2020, the pace of construction of training aircraft was low – 6 units. passed in 2010 and only 3 in 2011. However, already in 2012-13. The Air Force handed over 15 and 18 aircraft, respectively. The peak took place in 2014, when 20 vehicles were put into operation. Subsequently, annual deliveries ranged from 6 to 14 units. in year. In connection with the execution of the existing contracts in 2019, the new Yak-130s were not supplied to the customer, but in 2020 the army transferred 4 units. next order.

Due to competent planning and a sharp increase in funding in 2010-2020. managed to significantly update the fleet of combat aviation of the Air Force and the Navy. However, not all urgent tasks in this area have been solved, and new development measures will be taken already within the framework of the current State Program for 2018-2025.

First of all, it is necessary to continue the production of modern aviation technology both with the aim of increasing the combat effectiveness of troops, and for the gradual replacement of obsolete and decommissioned vehicles. Last year, it was reported that new contracts were soon to be signed for fighters and training aircraft of all major types. Deliveries for these orders can begin as early as 2021 and solve some of the existing problems. There is information about plans for dozens of aircraft of various types. 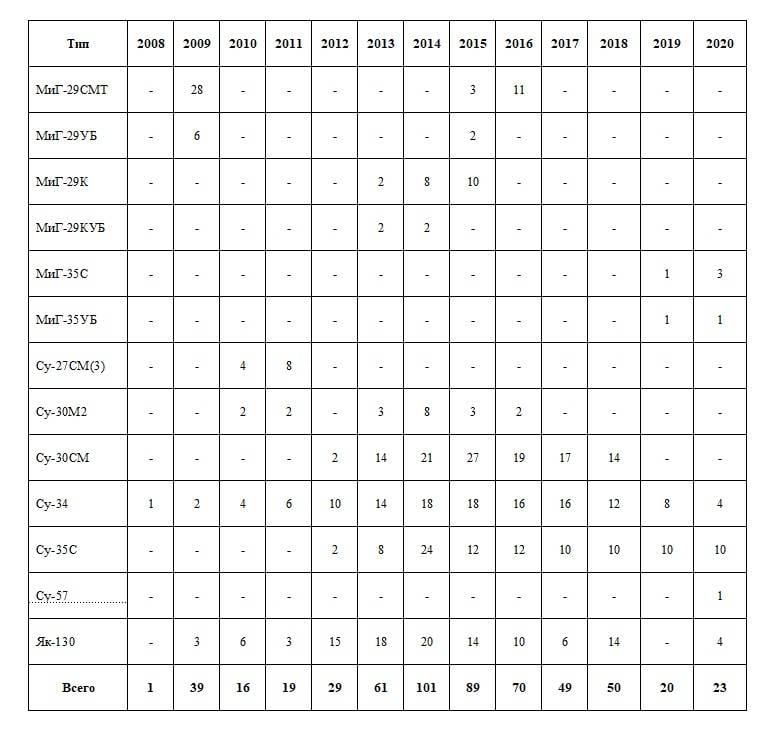 It is easy to see that in 2010-2020. combat aircraft were built only for tactical aviation, while long-range aircraft were updated exclusively by modernizing the available fleet. In the near future, the situation will begin to change. The first Tu-160M ​​bomber of a new construction is expected to be delivered this year, and in the future the number of such machines will grow. Later, by the middle of the decade, it is expected to launch the production of fundamentally new PAK DA bombers.

Thus, the period 2010-2020. was of great importance for the restoration and modernization of Russian military aviation. Annual deliveries of equipment in comparison with previous periods have grown significantly. Quantitative and qualitative growth was observed. In addition, the latest State Armament Programs have had a positive impact on the state of the aviation industry and related industries.

After 2020, the process of modernizing the combat aviation of the Air Force and the Navy will not stop. New contracts are planned and concluded for the next few years. One important and responsible period is replaced by another – with similar goals and objectives. At the same time, new stages of rearmament and modernization will be built on the foundation laid in the recent past.