Models of modern armored vehicles at the OMT consultation in October

In early November, the US Army Ground Vehicle Systems Center (GVSC) revealed new details of the promising OMT (Optionally Manned Tank) program. In October, the Center held regular consultations with tankmen from the combat unit, and they evaluated the proposed concept projects of a promising tank. Recently, new details of various kinds appeared in foreign media.

Recall that the goal of the OMT program at the moment is to develop the appearance of a promising main tank that can be operational by the early thirties. The work is carried out by GVSC specialists with the involvement of various contractors and consultants in the person of the US Army tankers.

In the wake of a recent military event, several interesting photographs have been posted. They included description posters and mock-ups based on current OMT concepts. Despite the retouching, it could be concluded that the tankers were shown four variants of the combat vehicle.

The other day, clear images of the three proposed concepts have become freely available. Armored vehicles are shown on them from different angles, which allows you to see them well. In addition, the main tactical and technical characteristics and features of the ammunition are given. Of great interest are the published opinions of tankers-consultants. With all this, there are no materials on the fourth version of the promising tank.

The first variant of the OMT concept proposes the construction of a tank with a front control compartment, an aft engine compartment and, probably, an uninhabited turret. Its characteristic features include an upper frontal part with a large angle of inclination and two hatches for the crew, a turret with an inclined forehead and a developed aft niche, as well as various attachments of protection. The mass of such a tank is determined at 54.9 tons. 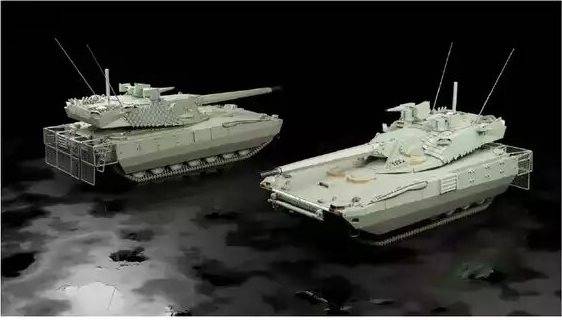 OMT Var.1 is proposed to be equipped with a 120-mm smoothbore cannon with an automatic loader. On the roof of the tower there are observation devices and two remotely controlled combat modules with 12.7 and 7.62 mm machine guns. Ammunition includes 28 rounds for various purposes for a cannon, 1,000 large-caliber rounds and up to 11,000 rifle cartridges.

The second OMT concept envisages the construction of a tank with a similar architecture, but a different appearance with specific features. For example, a rear-engined hull with a “capsule” of the crew is used, behind which there is a fighting compartment, which is probably uninhabited. The side projection of the hull is covered with reactive armor, the stern is covered with a lattice screen. The tower has an interesting design: a narrow barrel breech casing is attached to the turntable, immediately behind which the dome expands and forms a developed niche. Perhaps it contains ammunition in an automated stowage. The mass of such a tank is almost 59.9 tons.

The OMT Var.2 tank is proposed to be equipped with a 1XX mm cannon with a developed muzzle brake. Additional armament – two DBMs with machine guns of normal and large caliber, as well as a coaxial machine gun. The tower houses a full set of necessary observation and guidance equipment. The ready-to-use gun ammunition – 30 rounds, 6 more were placed in the packing of the second stage. The tank also carries 1,000 rounds for a large-caliber machine gun on the DBM and 11,000 for the other two.

The third concept of the OMT tank resembles some modern examples. This is a traditional vehicle with a non-standard two-seat control compartment in the hull and a manned turret. The latter is distinguished by its large size and is capable of carrying appropriate weapons. Unlike other concepts, OMT Var.3 has only obscure type hinged screens; reactive armor and grilles, apparently, are not provided. The mass of such a tank will exceed 64.8 tons.

In the picture shown, the OMT Var.3 is equipped with a cannon similar to that used in the second concept. This is a system with a caliber of over 100 mm with a characteristic muzzle brake. The ammunition load, ready and of the second stage, corresponds to the previous concept – 36 shells for various purposes and 12 thousand cartridges of two types. 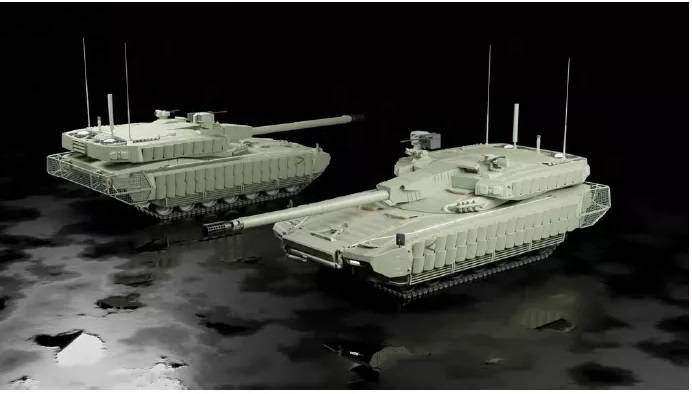 Second version of the tank

A curious feature of all three concepts is the ability to integrate their own reconnaissance unmanned aerial vehicle. With its help, the crew will be able to study the terrain and look for targets in the range of ranges of application of tank weapons or beyond. It is possible to introduce specific functions, up to equipping the UAV with one or another weapon.

According to the name of the program, the promising MBT will be able to work under the control of the crew or at the commands of a remote operator. However, the published data does not reveal any such questions. How the optional crew presence will be implemented is unknown.

As reported, tankers from the Fort Benning base appreciated the presented concepts and expressed their opinions. Some of the ideas received support, while others were criticized. Most likely, this will affect the further development of the OMT program.

The tankers confirmed the need to use an auxiliary power unit. With its help, the armored vehicle will be able to perform some functions without starting the main engine. The widespread use of electronic systems makes the APU an indispensable component. It is proposed to introduce an advanced self-diagnosis system that monitors the state of the tank’s units. In addition, it is necessary to provide for the possibility of control and combat use with the electrical systems turned off – due to mechanics and hydraulics.

The fighters would like to have an integrated climate control system in the tank, combining air conditioning, heater and collective defense against weapons of mass destruction. Such a complex can be controlled from one control panel, which will relieve work places. In addition, during repairs, it will be possible to replace the entire unit as a whole without reaching the individual components. 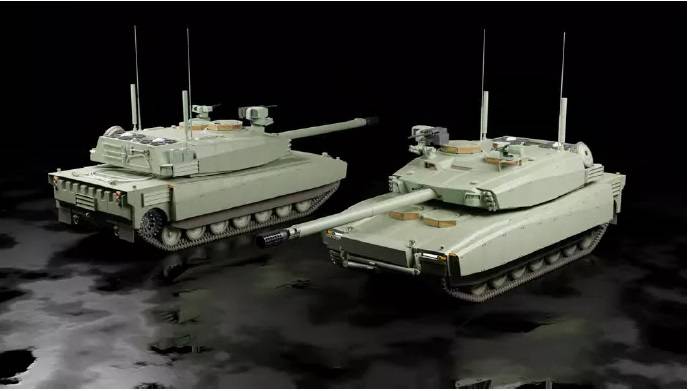 The fire control system should continue to include independent commander and gunner instruments. Standard devices should be supplemented with a “transparent armor” system and “friend or foe” identification means. It is necessary to further develop navigation aids, incl. with the ability to create a three-dimensional map of the area using a standard UAV. Requirements for the gun descent angles remain. Like its predecessors, the new MBT should be able to fire from reverse slopes. It is proposed to develop a new system of counteracting enemy fire weapons. It must send incorrect data to enemy sensors, interfering with aimed shooting.

The idea of ​​using the UAV was approved, but several proposals were made. So, tankers require the use of optics with good image quality. The function of automatic return of the drone to the carrier tank is desirable. There is interest in tethered UAVs, powered by a tank and capable of hovering and flying for extended periods of time. The idea of ​​using a light reconnaissance and strike UAV did not find active support. Tankers are interested in getting maximum firepower, but not at any cost and not at the expense of other functions.

The issues of the operation of equipment in combat conditions did not go unnoticed. So, it is necessary to provide independent evacuation of the damaged armored vehicle or to simplify the preparation for towing behind the ARV. Now this requires the efforts of 3-6 people. and quite a long time. In a combat situation, they are all exposed to risks, which, among other things, threaten the evacuation process.

At the evaluation stage

Currently, GVSC continues research work on a promising “optionally manned tank” and searches for the most interesting and useful ideas and solutions. To date, they have been collected in several concept projects with different characteristics. Recently, a regular consultation with future operators took place, based on the results of which new conclusions will be drawn that will determine the further development of the program.

The current stage of work on the OMT will continue until 2023, when it is planned to form the optimal appearance of the promising MBT. Then the project will be offered to the customer, who will determine his future fate. With a positive decision by the Pentagon, the OMT program will be developed, and by the end of the decade, at least experimental tanks will appear. What they will be is unknown. However, it is quite possible that one of the current concepts will form the basis of a real project.