The Russian defense industry has launched mass production of new models of guided bombs, and in the near future such products will go to the troops. Boris Obnosov, General Director of the Tactical Missile Armaments Corporation, spoke about the latest developments in the field of guided aircraft weapons in a recent interview for the Military Industrial Courier newspaper.

According to the head of the KTRV, last year there were serious shifts in the field of guided bombs. Thus, tests of bombs of a new family in calibers 250, 500 and 1500 kg were completed. The Ministry of Defense issued large and long-term contracts for the production of such weapons and the supply of finished products to combat units of the Aerospace Forces. The production of new aerial bombs is organized at the facilities of the State Scientific and Production Enterprise “Region”.

In the context of new developments B. Obnosov mentioned several already known products from KTRV. Probably, it was they who were meant in the story about the launch of the series and the early deliveries to the troops. These are the K08BE, UPAB-1500B-E and KAB-250LG-E guided gliding bombs. Earlier in the news only plans for their production appeared. 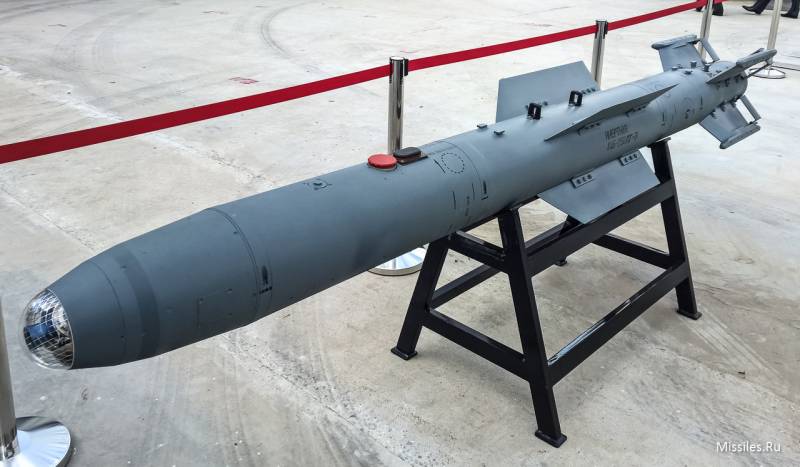 Testing is ongoing for several other products that may be serialized in the future. These are the KAB-250LG-E bombs, as well as the UPAB-500 and UPAB-1500. All these bombs are created taking into account the use of Su-57 aircraft. In accordance with the plan, they are tested on such a medium. The head of KTRV noted that the fact of purchasing a serial batch of Su-57 fighters, among other things, shows the success of testing the aircraft with new weapons.

The mentioned samples have the letter “E” in the designation, indicating the export configuration. According to the general director of KTRV, this does not mean the creation and supply of weapons only for export. Such products go into their own army, but in the open press they consider it necessary to disclose only the agreed export image.

It should be noted that the samples of aviation weapons listed in the interview are already known to specialists and the public. Materials on them were published earlier, and models were demonstrated at exhibitions. However, the latest news about the completion of tests and the start of production is of great interest. In fact, we are talking about the adoption of a new generation of domestic guided aerial bombs with new capabilities and improved characteristics. 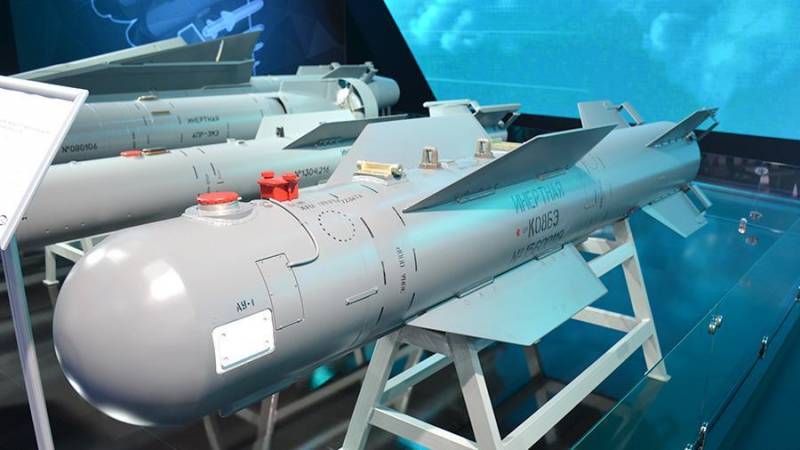 The new family of bombs, put into production, is built on the basis of common ideas and components, which greatly simplified the development and reduced the cost of rearmament of the Aerospace Forces. In addition, in all cases, a gliding method of flight to the target was used, which increases the drop range and the overall combat qualities of the product. The differences between the three new bombs are in the caliber and power of the warheads, as well as in the means of guidance.

The smallest of these is the KAB-250LG-E aerial bomb. This product is 3.2 m long with a case diameter of 255 mm and two sets of planes on the outer surface. The mass of the bomb is 256 kg, of which 165 kg falls on the high-explosive fragmentation warhead. Explosive charge – 96 kg. A contact fuse with three delay modes is used. The bomb is equipped with a laser homing head.

The KAB-250LG-E product is proposed for use by front-line aircraft. It can be dropped from heights up to 10 km; target illumination by the carrier or third-party gunner is required The range of such a bomb has not been specified. Accuracy – up to 5 m. With the help of KAB-250LG-E, you can attack vulnerable vehicles or unprotected fixed structures. 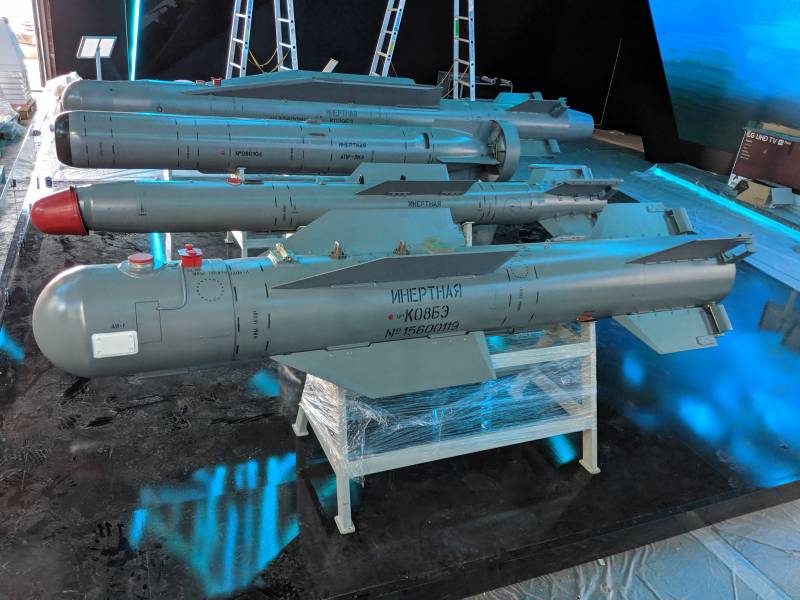 The K08BE bomb (the designation UPAB-500 is also found) is a larger ammunition for hitting point and area targets with previously known coordinates. It is built in a cylindrical body 2.85 m long and 355 mm in diameter. Outside, there are small wings and rudders. Product weight – 505 kg, incl. 390-kg warhead. A contact multi-mode fuse is used. For flight to the target, a combined inertial and satellite guidance system is used.

Front-line aircraft can drop a K08BE bomb from altitudes up to 14 km. Depending on the initial altitude and speed, it can hit a target at a distance of up to 40 km from the drop point. The guidance accuracy is up to 10 m. Due to the peculiarities of the guidance means, the K08BE / UPAB-500 cannot attack moving targets.

The K029BE or UPAB-1500B-E product is similar in its tasks to the UPAB-500, but has increased dimensions and a different design. The bomb is over 5 m long and 400 mm in diameter. Weight – 1525 kg, including a high-explosive concrete-piercing warhead weighing 1010 kg. UPAB-1500B-E is distinguished by a triangular X-shaped wing design, which compensates for the increase in mass. Guidance – inertial and satellite. 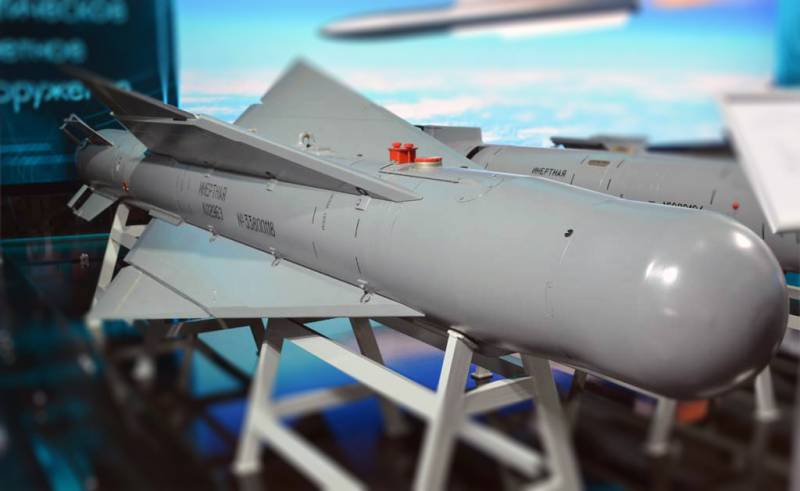 When dropped from altitudes up to 15 km, the UPAB-1500B-E can hit a target at a distance of up to 50 km. The declared deviation is no more than 10 m. Due to the concrete-piercing warhead, such a product can be used against strong and protected enemy targets – bridges, command posts, industrial structures, etc.

It should be recalled that the Russian Aerospace Forces already have a number of guided aerial bombs of different calibers and with different guidance principles. The adoption of new models will expand the ammunition load of front-line aviation and have a positive effect on its combat capabilities. In addition, such a weapon will allow you to get rid of known risks.

The strengths of guided bombs are their high accuracy, increased power, as well as relative simplicity and low cost in comparison with missiles of similar characteristics. At the same time, the lack of a propulsion system seriously limited the range of use of bombs, and in a number of situations the missiles had no alternatives.

The latest generation of aerial bombs from KTRV is distinguished by the possibility of gliding flight over a range of tens of kilometers. Thanks to this, the carrier aircraft can drop the bomb at a safe distance from the target, without entering the enemy’s air defense zone. At the same time, all other advantages of weapons in the form of accuracy, power, simplicity and low cost are preserved.

It is important that last year there were long-term contracts for the supply of new bombs to the Aerospace Forces, and the development organization has already begun mass production. Thus, in the near future, such weapons will fully enter the arsenals of combat aviation and expand its capabilities for solving certain tasks.

Products of new types, having entered the arsenals, will supplement the existing corrected bombs and missiles. A wider choice of means of destruction will provide new opportunities in the context of strike planning and will significantly increase the flexibility of the use of front-line aviation. In other words, depending on the characteristics of the target and the threats on the battlefield, it will be possible to choose a bomb with the optimal combination of flight characteristics, the principle of guidance and power.

KTRV enterprises continue to develop the subject of corrected aerial bombs, and the first results of such processes are already known. In the coming years, it is planned to adopt several new products of this kind with certain features. For example, in 2022, the first deliveries of the PBK-500U Drel cluster bomb are expected. Also, products are created with a caliber of up to 50-100 kg, intended for use by unmanned aerial vehicles.

Thus, the process of creating guided aircraft weapons does not stop and is gaining momentum. With a frequency of several years, the industry presents whole lines of new designs with certain features and advantages. Then these products go through a full cycle of tests and go into service. The latest news shows that processes of this kind continue – and have a positive effect on the capabilities of the videoconferencing system.