Tu-214ON, number 64525, is the second aircraft of this type. Photo Wikimedia Commons

To perform observation flights under the Open Skies Treaty (OON), a small fleet of specially equipped aircraft was created in our country. The newest examples of this kind were two Tu-214ON vehicles, built in 2011-13. In connection with the withdrawal of Russia from the Don, the further fate of the observation aircraft could be called into question, but they have already found a new role.

By the beginning of the tenth years, the Russian aviation detachment, to perform flights on the DON, included relatively old Tu-154M LK-1 and An-30B aircraft with aerial cameras and some other equipment. In the 2000s, the development of a new aircraft with more advanced surveillance equipment began. The Tu-214 airliner was taken as the basis for it, and the Vega concern was entrusted with the development of the Open Sky Air Surveillance System (ASN OH). Also known is the designation “Airborne Observation Equipment Complex” (BKAN).

The first Tu-214ON (board number 64519) took off in the summer of 2011, and the second (w / n 64525) went out for testing at the very end of 2013. It was assumed that these aircraft will be used to inspect facilities in the United States. European facilities, in turn, were planned to be checked using old technology. However, such plans were not immediately fulfilled. 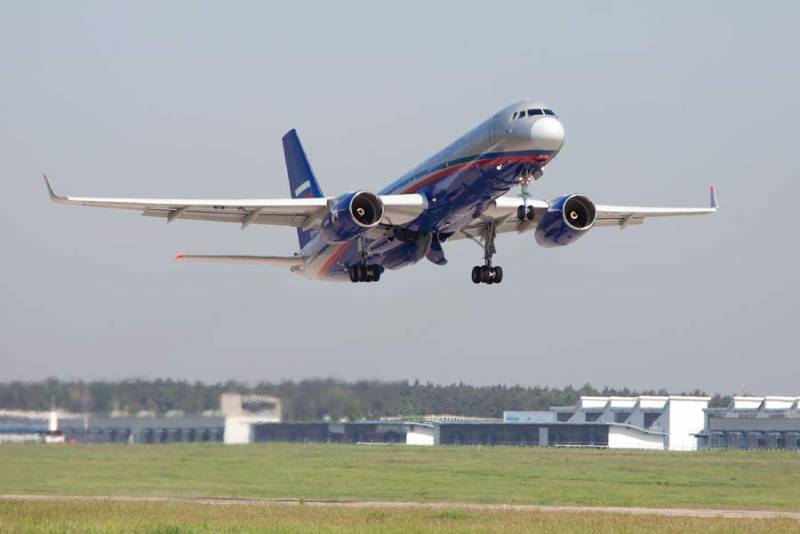 For several years, the Tu-214ON could not start flying: the American side refused to certify such equipment to work on its territory. Washington suspected that the new Russian aircraft did not meet the required characteristics and had “undocumented reconnaissance capabilities.”

International certification of a new type was carried out in September 2018. Then it was possible to obtain a permit for flights from two dozen countries, incl. from the USA. Thanks to this, from April 25 to April 27, 2019, Tu-214ON, w / n 64525, was able to perform the first flights over American territory. During this inspection, military bases, factories and landfills in the states of Texas, New Mexico and Colorado were checked.

The first series of flights was the last. Just a few months after it, the United States began to look for reasons to withdraw from the Don. In May 2020, Washington formally announced such a decision, and on November 22 withdrew from the agreement. Accordingly, new flights of Tu-214ON or similar equipment from other countries over American territory are now impossible. 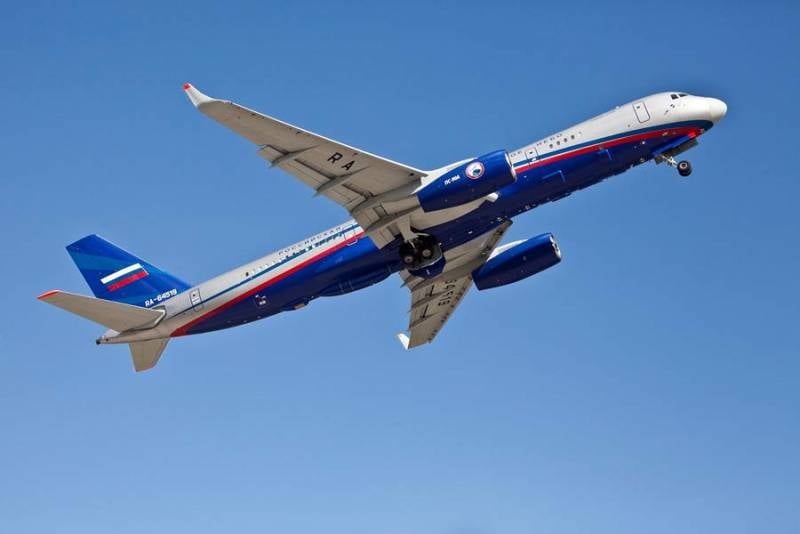 The first aircraft of its type. Photo “Tupolev”

On January 15, responding to the actions of the United States, Russia also began procedures to withdraw from the Don. All the necessary measures will be completed in the near future, and plans for new flights of Russian aircraft over foreign objects have already been canceled. Thus, the short-term operation of the Tu-214ON in its original role has been completed and, most likely, will not resume.

On February 19, the Rostec press service revealed interesting information about the possible future of the existing Tu-214ON. Concern “Vega”, which has developed the ASN ON / BKAN complex, is ready to modernize it to obtain new functions and capabilities. After this modification, the observation aircraft can be used in the military and civilian spheres.

The Vega leadership claims that the Tu-214ON in a modified version will be able to solve a number of tasks in the interests of the Ministry of Defense. It can be converted into a reconnaissance aircraft with the ability to collect data in different spectra. Also, this aircraft can be used to control the security of facilities of the armed forces, to monitor army exercises or as part of testing various weapons or equipment. The Border Guard Service will be able to use surveillance aircraft to patrol border areas. 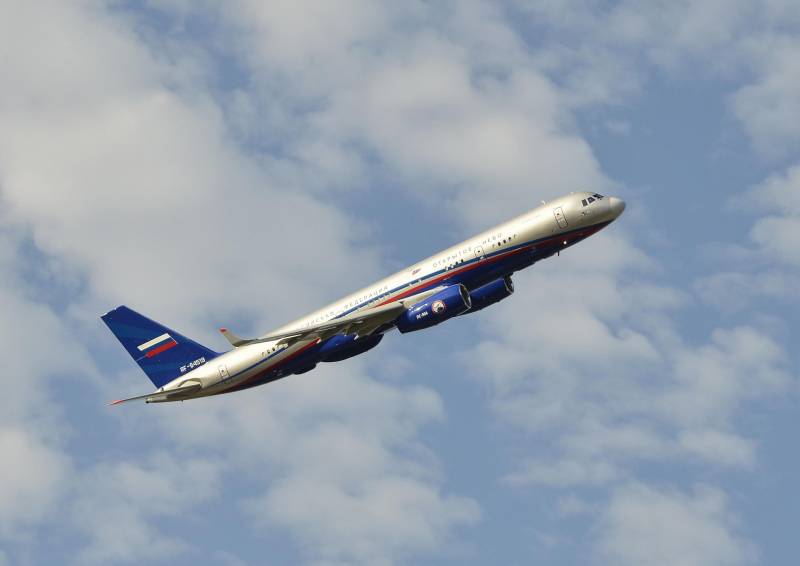 It differs from the serial Tu-214ON only in a few fairings on the bottom. Photo “Tupolev”

With the help of the modernized Tu-214ON, it is possible to carry out mapping or data collection about the current situation, for example, about ice conditions. Such an aircraft can interest the Ministry of Emergency Situations and other non-military structures.

Vega argues that the BCAN system is made according to the principles of an open architecture, which simplifies its modernization or restructuring for different tasks. Thus, two Tu-214ONs have the widest opportunities and prospects. The methods and terms of their implementation directly depend on the wishes and plans of customers.

In a new role

On March 4, Tu-214ON, number 64519, took off from the airfield in Taganrog, passed along the coast of the Azov Sea and flew around the Crimea perimeter. Then he headed for Anapa, where he performed a number of maneuvers and then flew to Novorossiysk. After several hours of such a flight, the plane returned to Taganrog. The flight was carried out with the transponder turned on, and users of tracking services could watch it in real time. 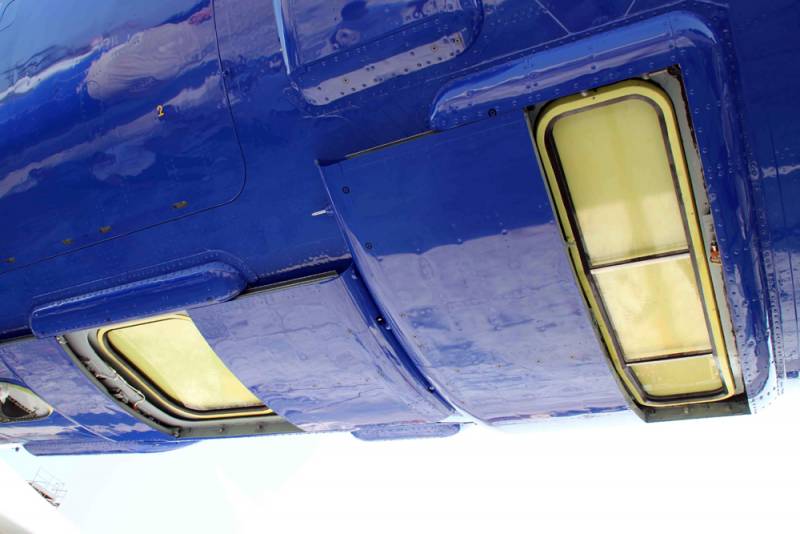 Camera portholes on the bottom of the aircraft. Photo Bastion-karpenko.ru

Later, the details of this flight became known. As RIA Novosti reported on March 6, the Tu-214ON made a flight in the interests of the Ministry of Defense. The plane checked the security and camouflage of military installations along the route. In particular, they checked the Sevastopol and Novorossiysk naval bases. In addition, the Tu-214ON became a conditional air target, on which the air defense system crews worked out their skills.

The RIA Novosti source also claims that other, unnamed tasks were solved during the flight. In addition, during the event, it was possible to assess the potential of the Tu-214ON onboard equipment in the context of the typical tasks of the armed forces. Now the military will have to analyze the results of the flight and make a decision on the launch of the aircraft operation or on the need for its modernization.

According to open services, flights were carried out later. For example, on the morning of March 23, aircraft w / n 64519 flew from the Chkalovsky airfield to Kubinka, and from there went to Taganrog. Probably, in the coming days, there will be new messages about his “reconnaissance” flights with one purpose or another.

At its core, the Tu-214ON is a reconnaissance aircraft carrying optical-electronic and radio-technical means of collecting information. According to DON, the performance of such equipment is limited. Thanks to this, the aircraft cannot collect unnecessarily detailed information and does not threaten the security of the countries participating in the treaty. 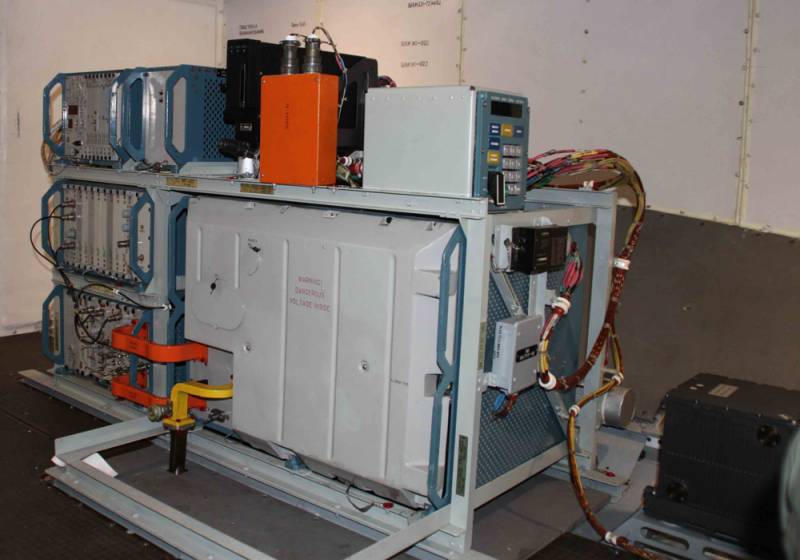 One of the equipment blocks. Photo Bastion-karpenko.ru

According to open data, the BKAN complex includes a set of optical-electronic devices of various kinds, a radar complex and a central computer complex with automated workstations. The equipment is controlled by a crew of five people: this is the senior flight representative, as well as the operators of the aerial photographic complex, infrared equipment, television cameras and radar.

Target equipment is located on the lower deck, incl. under the protruding fairings. The aircraft is equipped with a side-looking radar “Ronsard” with a swath of up to 25 km and a field of view of 50 km. Collection and recording of data for subsequent processing is provided. Radar resolution is limited to 3 m.

Installed three digital aerial cameras, one planned and two prospective. Initially, the Tu-214ON was equipped with foreign cameras, then modernization was carried out using similar domestic equipment. For heights up to 1000 m, one planned and two perspective television cameras are intended. The daytime equipment is supplemented with an infrared system. In accordance with DON, the resolution of optics is limited to 30 cm, and of IR equipment – 50 cm. 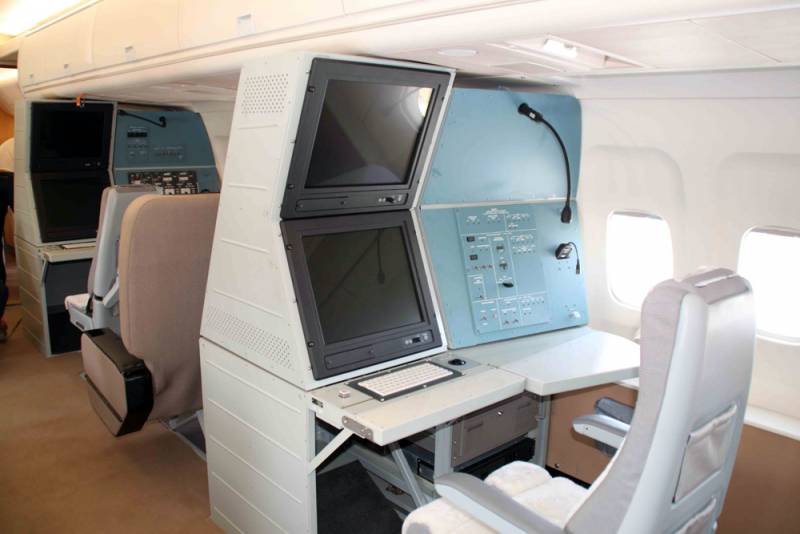 BKAN / ASN ON allows observation in daylight and dark hours of the day in any weather conditions. All available devices can be used under favorable conditions; in other situations, the crew must use thermal imaging or radar equipment.

Tu-214ON is operated together with the COEN-214 ground equipment complex. It includes a data preparation workstation with software, document printing tools, training tools, etc. After the flight, data from the on-board computer are transmitted to COEN-214 for the subsequent preparation of documents.

Two Tu-214ON aircraft were created and built to solve a specific task aimed at ensuring transparency and improving international relations. The deterioration of the military-political situation no longer allows these vehicles to perform their original tasks, but they do not remain without work. One of the planes now simulates enemy reconnaissance and tries to identify unmasked objects of the army. 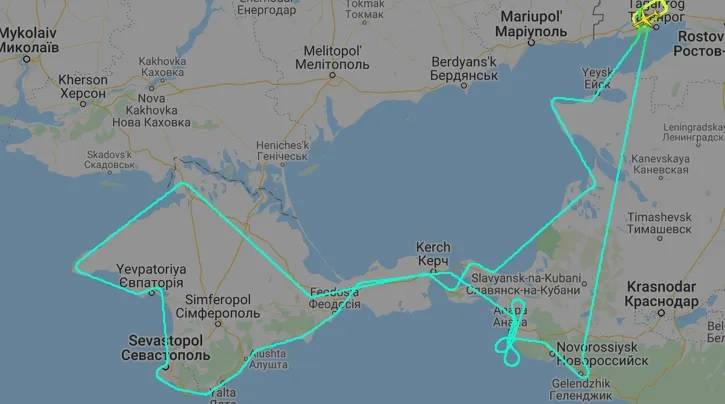 The possibility of modernization in order to obtain certain characteristics or new capabilities, depending on the customer’s requirements, was announced. More complete compliance with the wishes of the military department or other structures will lead to more active use of aircraft in various fields. The flights observed now from the Moscow region to places of work will become familiar and routine.

Thus, a very interesting situation is developing around the Tu-214ON. The specialized aircraft can no longer perform the mission for which it was created. However, the impossibility of new flights over the USA does not interfere with working in Russian airspace. And it is already clear that such operation of the Tu-214ON will be long-term and useful in all respects. Perhaps even more important than the Open Skies Treaty.