In the interests of the US Army, a promising ENVG-B (Enhanced Night Vision Goggle – Binocular) night vision device is being developed. To date, these products have been brought to the stage of small-scale production and military trials. In the near future, testing of the first batch of devices will be completed, and the Pentagon will order full-scale production.

At the end of the 2000s, the US Army began introducing the latest monocular-type ENVG night vision device. In the future, this product was modernized with new capabilities. In the mid-tenths, it was decided to create a new night vision device with improved characteristics. The ENVG-B program provided for the development of a binocular device based on modern technologies.

Several commercial organizations have joined the work. L3Harris and the American branch of Israel’s Elbit Systems entered the final stage of the program. They presented experimental batches of new night vision devices for testing and showed their advantages over competing designs.

Already in 2018, L3Harris received the first order for small-scale production of its version of the ENVG-B. The first deliveries took place the following year, with the army donating 52 sets of new equipment. Under the terms of the contract, the development company, upon successful completion of the tests, will have to supply 10 thousand night vision devices with a total value of more than $ 390 million. 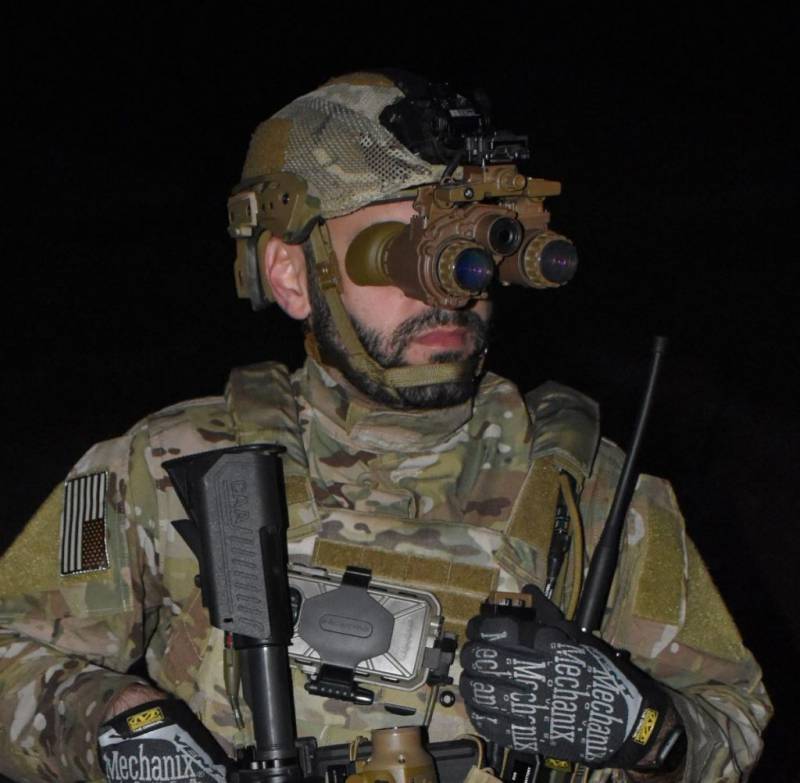 Elbit Systems of America previously supplied the customer with a small batch of NVDs for the first tests. In October 2020, it received a new contract for the supply of an unnamed number of products worth $ 22.5 million until the end of 2021. It is reported that in the future, it is possible to conclude new agreements for 440 million.

Army units involved in military trials received two types of ENVG-B devices in 2019. After mastering these devices, military personnel were involved in comparative tests in laboratories and training grounds. The first events of this kind took place in the spring-summer of 2020. Subsequently, similar tests were carried out with the participation of different military units, incl. from different types of troops.

So, on January 14, the Pentagon announced that tests were being carried out with the involvement of members of the Maryland National Guard Army. The fighters arrived at the Aberdeen Proving Ground, where they were able to test the ENVG-B devices in laboratory conditions. In the light and in the dark, the fighters were shown two-dimensional figures and volumetric objects, incl. at different distances. This made it possible to evaluate the accuracy of transmission of the optical signal in different modes of operation and its distortion.

On January 24, at the Fort Bragg base, field tests of the ENVG-B NVG were completed with the participation of fighters from the 82nd Airborne Division. Together with a night vision device, a sighting device for STORM II rifles was tested. The paratroopers, who received new products, made parachute jumps and fought a training battle in difficult conditions. The tested devices coped with the assigned tasks and got good marks. 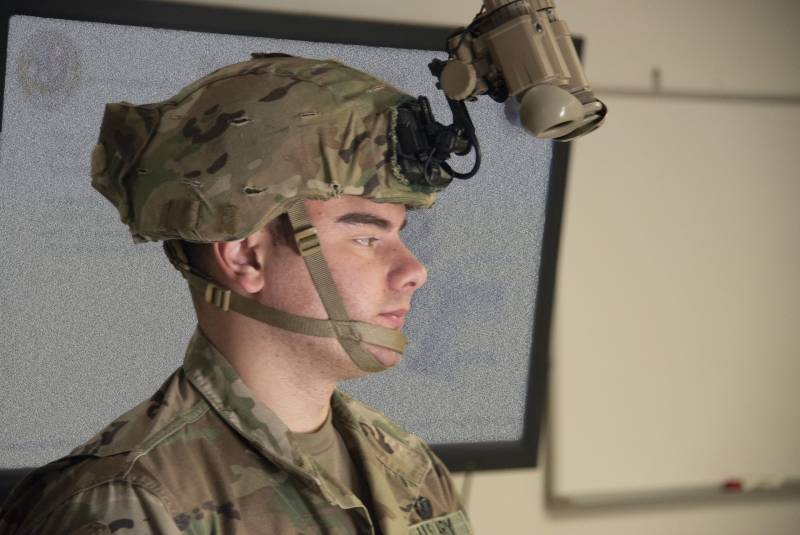 A soldier from the 82nd Airborne Division on trial, January 2021. Photo by US Army

ENVG-B devices from two developers have the same architecture and similar appearance, and their characteristics are on the same level. At the same time, there are certain minor differences that can affect the real capabilities of a soldier equipped with such a product. In the course of ongoing testing, it is planned to determine the most convenient and efficient instrument of the new model.

ENVG-B is a compact device with a mount for installation on a regular infantry helmet. The product is equipped with three optoelectronic elements. These are two units with dual-band image intensifiers and eyepieces that form binoculars, as well as a separate infrared camera. All elements are mounted on hinges and can be removed from the fighter’s field of vision. In addition, an electronic unit has been developed for data processing and information exchange.

Both types of NVD have several modes of operation. When using only “tubes”, the product provides surveillance in low light conditions. In this case, the device receives weak light and provides an enhanced image to the eyepiece. So, the device from L3Harris uses a new generation of image intensifier tubes based on white phosphorus with increased characteristics. The eyepieces have built-in color screens with a resolution of 1280×1024.

It is possible to connect an IR camera, incl. with the use of backlighting. The signal from the camera goes to the screens or is combined with the picture from the “tubes”. In the latter case, observation in several ranges is provided, and the image quality is also improved. Provided fast switching between modes for more effective search and destruction of targets. 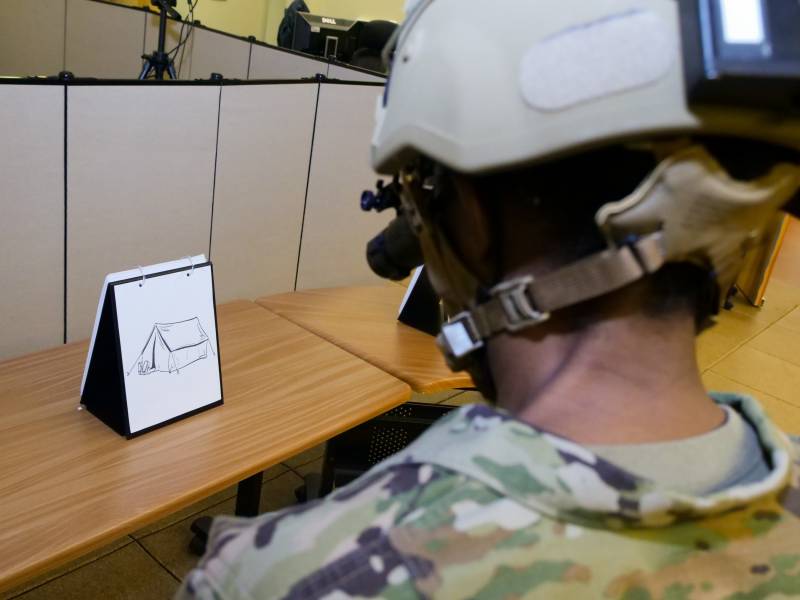 Study of the optical characteristics of the product. US Army Photos

The use of an electronic unit and screens allows you to create augmented reality. The electronic unit of the NVD can receive various information from other devices and display it graphically over the “live” image. The possibility of receiving and targeting, displaying maps of the area, etc. is declared. Additional information can be displayed on the right or left eyepiece, depending on the preference of the soldier. Also, the customer requires the transmission of all signals to third-party devices.

In recent tests, the ENVG-B type NVG was used in conjunction with the STORM II rifle scope. The latter is able to provide aiming at any time of the day and in the presence of various interference. In addition, the sight can be connected to a binocular device and transmit a video signal to it, which simplifies firing in difficult conditions and reduces the risks for the shooter.

On the eve of refitting

The US Army already has a number of night vision devices and thermal imagers in mono- and binocular design for infantry use. Such equipment has long shown and confirmed its capabilities in the conditions of training grounds and real conflicts. There are also developments in optical-electronic sights, communications, etc. Thus, the development of new samples with certain improvements was exclusively a matter of time.

The current Enhanced Night Vision Goggle – Binocular project is based on the curious idea of ​​combining several different devices in one device. Thanks to this, the fighter receives only one night vision device with the potential of several, as well as with completely new functions and with the ability to pair with other equipment. 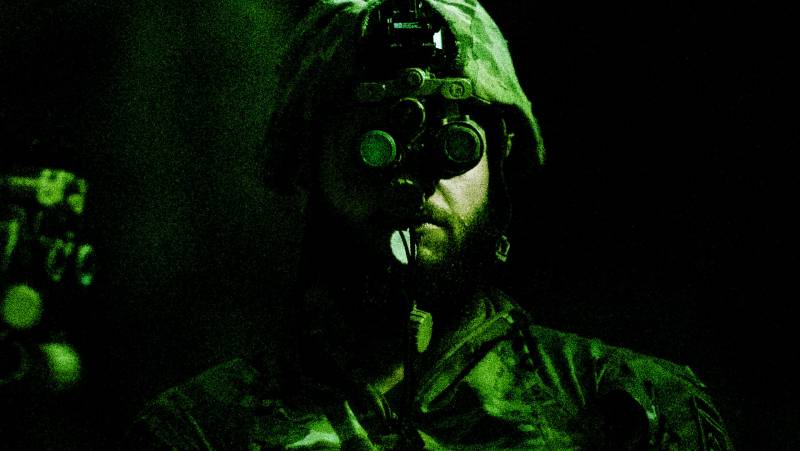 Currently, ENVG-B instruments are undergoing extensive testing with the involvement of military personnel and are showing themselves in the best possible way. It is obvious that the developments of the companies L3Harris and Elbit Systems will be put into service in the near future, after the completion of the fine-tuning and all the checks.

At the moment, it is known about preliminary orders for 10 thousand new devices with a total cost of at least $ 390 million. However, for the full rearmament of all infantry and airborne units, a much larger number of promising night vision devices may be needed. Perhaps the contracts for their supply will be divided between the two manufacturers, which will make it possible to re-equip the army in a shorter time.

Thus, in the near future, the US Army will receive a new generation of night vision devices with advanced capabilities. It is likely that the ENVG-B products, having proven their advantages, will not only ensure the rearmament of their army, but also create a new trend in the field of soldier equipment. As a result, similar developments will soon appear in other countries.