Currently, the Polish armed forces are studying the issue of modernizing tank forces. It is supposed to write off the obsolete equipment and purchase a number of new machines. Among others, the South Korean corporation Hyundai Rotem is interested in obtaining a production contract. She offers the Polish military promising MBT K2PL.

The program for the modernization of tank forces with the Wilk (“Wolf”) code was launched in 2017. Its goal is to decommission the obsolete T-72M1 and PT-91 Twardy tanks and purchase up to 500 vehicles of the new model. These may be tanks of foreign design, but it is planned to produce them, at least, with the participation of the Polish industry. Along with the new tanks, the existing Leopard 2s undergoing modernization will remain in service.

At the moment, “Wolf” is in its early stages. The Ministry of Defense studies its needs and considers offers on the market. Thus, the possibility of joining the French-German program MGCS or another foreign project is being investigated. In 2019, the Polish military showed interest in the South Korean K2 Black Panther tank and even got acquainted with a production vehicle of this type.

In January this year, the South Korean media reported on the imminent signing of a contract between the Polish Ministry of Defense and Hyundai Rotem Corporation for the development of the K2 modification, taking into account Polish requirements. The document has not yet appeared, but the project, most likely, has entered the preliminary study stage. 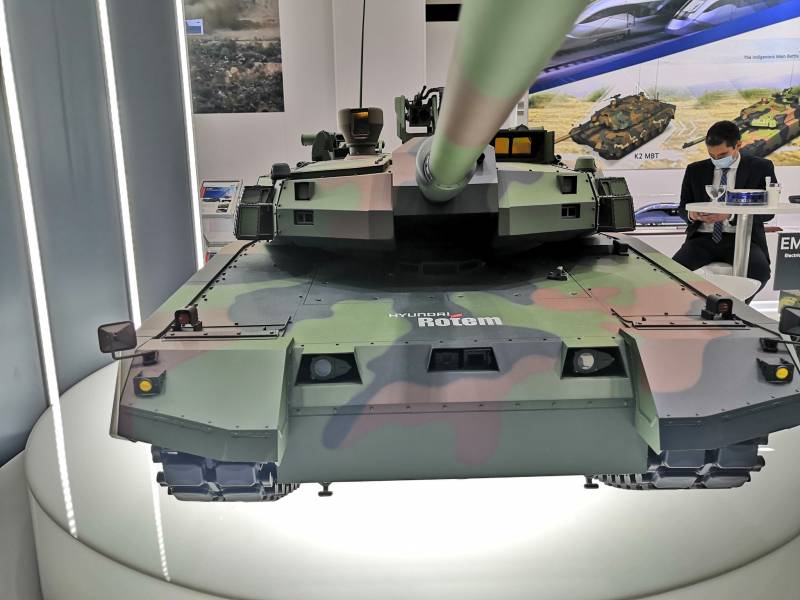 The military-technical exhibition MSPO-2020 was held in Poland from 8 to 10 September. At this event, Hyundai Rotem showed for the first time a mock-up of a tank with the symbol K2PL. This MBT is noticeably different from the “Black Panther” of the serial appearance and should more fully meet modern requirements – both Polish and global.

New components on the old platform

The K2PL project provides for a relatively quick and easy creation of a new MBT with higher performance. It is proposed to keep the standard hull and turret, power plant and other components. At the same time, the complex of protection and weapons is being seriously reworked, and the chassis is being strengthened to compensate for the increased combat mass.

It is proposed to supplement the standard armor of the K2 tank with overhead modules – combined or dynamic protection. Such modules are located on the frontal projection and on the side. The aft compartment of the hull, in order to avoid overheating, is equipped with lattice screens. The layout also contains active protection launchers. It is possible to use a complex of optical-electronic suppression. 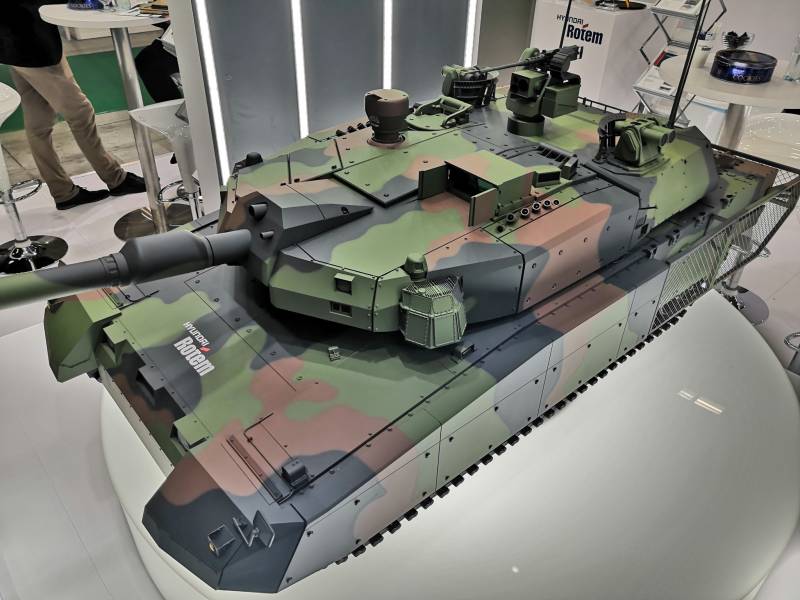 The replacement of the engine and transmission has not been reported, and it is likely that the standard units of the South Korean MBT will be retained. However, the exact composition of the power unit is unclear – serial tanks for the Korean army had three options for engines and transmissions. In all cases, a 1500 hp diesel engine was used. and automatic transmission. The undercarriage for the K2PL gets an additional pair of hydropneumatically suspended road wheels to compensate for the expected increase in combat weight.

The tank should retain its standard 120mm smoothbore cannon that meets NATO standards. At the same time, a significant modernization of the fire control system is proposed. It will retain the general architecture with combined gunner and commander sights (panoramic), but may receive new components. To the standard firing modes, at the request of the customer, they can add firing at low-altitude air targets.

Additional armament was rebuilt according to the standards of the Polish army. At the same time, they retained a coaxial machine gun of normal caliber. A combat module with a large-caliber machine gun is provided on the roof of the tower. Along the sides of the tower, under the cover of hinged modules, it is proposed to place two batteries of smoke grenade launchers. 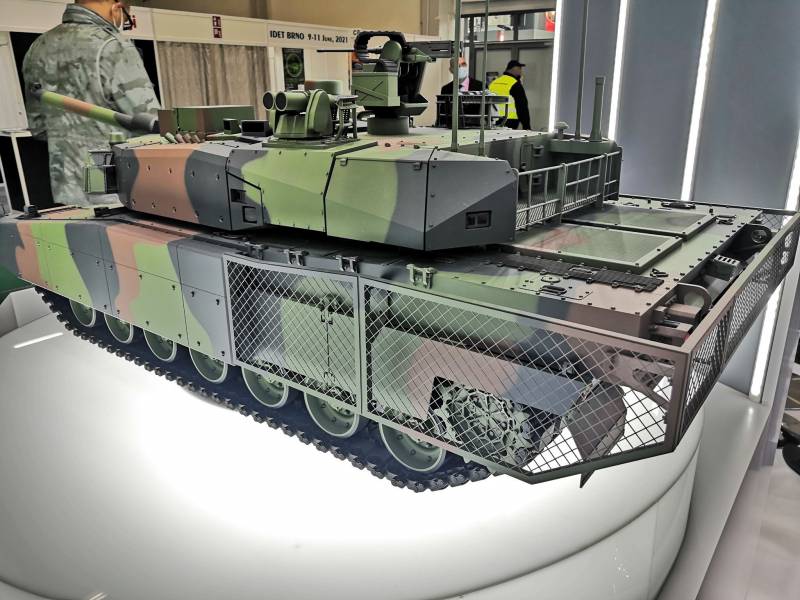 In terms of dimensions, the upgraded K2L tank should not differ significantly from the basic K2. A slight increase in width is possible due to the use of new onboard modules. At the same time, a significant increase in mass is expected in excess of 55 tons of the base sample. The measures taken to compensate for this weighting are likely to keep the driving characteristics at the same level.

The South Korean K2 Black Panther, according to various estimates, is one of the best main tanks in the world. It has an optimal balance of all the main characteristics and, at least, is not inferior to other advanced developments. Now Hyundai Rotem Corporation continues to assemble tanks for the South Korean army, and is also looking for foreign customers.

The basic K2 was developed taking into account the specifics of the potential Korean theater of operations. The modernized K2PL has a number of differences due to the specifics of the European theater of operations and its typical threats. By improving protection, OMS, etc. a certain increase in all basic characteristics is possible. In fact, a good tank gets even better. 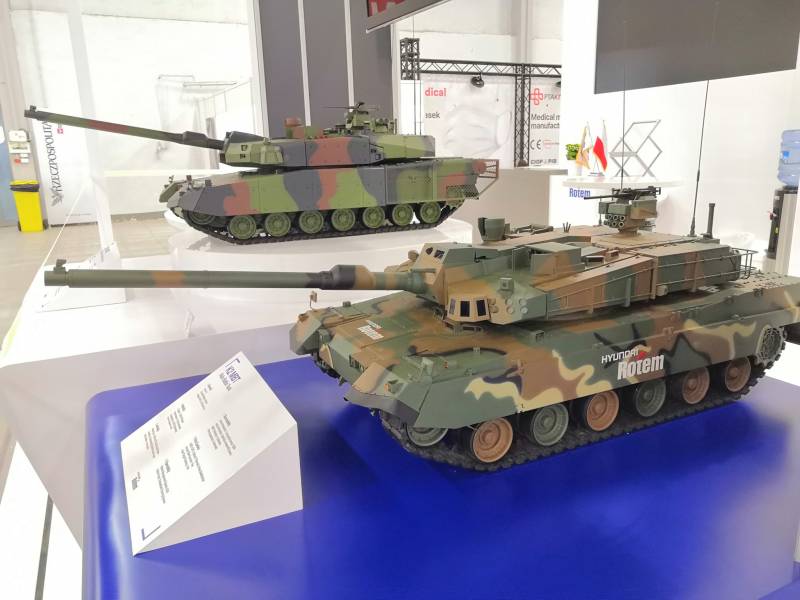 However, K2 and its “Polish” modernization have a big drawback – high cost. Serial “Black Panthers” of the latest series for South Korea cost approx. USD 9 million. Retrofitting by installing new components and appliances can increase the cost. The customer and the developer will look for ways to reduce the cost of the tank, but one should hardly count on a serious drop in price.

The future of the K2PL project under the Wolf program is uncertain. We can say with confidence that rearmament with the help of such tanks will not take place at all or will be very limited in scope. The reasons for this are simple – the South Korean tank is too expensive for poor Poland.

It should be considered that serial K2PLs, even when produced at Polish enterprises, will not be cheaper than $ 8-9 million per unit. Accordingly, a series of 50 required tanks will cost at least $ 4 billion. For comparison, Poland’s defense budget for 2020 is 12 billion. It is unlikely that the government will approve a tank building program worth a third of the Defense Ministry’s annual budget.

There are several ways out of this situation. The first is planning the construction of a large series for a long time, which will reduce the annual costs to an acceptable level. The second is the reduction of the required series, incl. with the total cost divided over several years. The third way out is to abandon the interesting but expensive South Korean project in favor of cheaper technology. 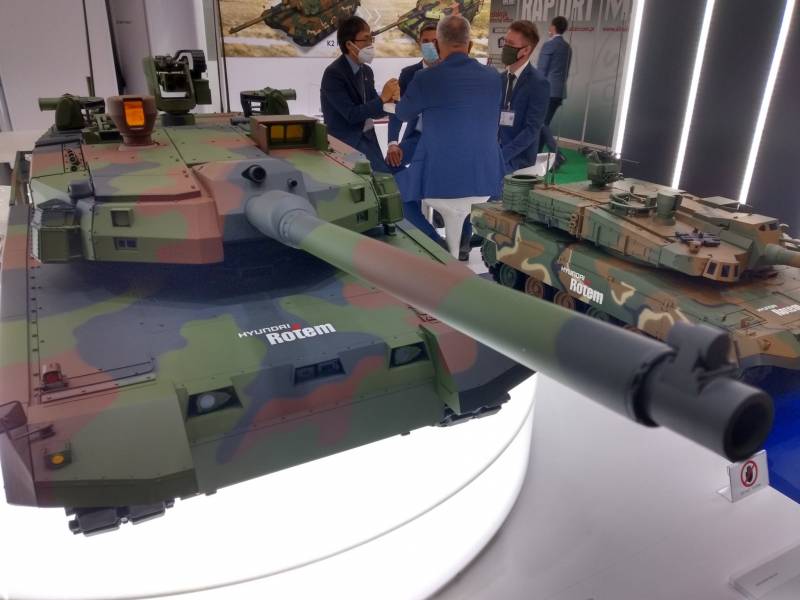 It should be recalled that Poland plans not only to purchase new tanks, but also to modernize the existing Leopards-2. Such a project also requires a lot of money and can take a long time. At the same time, the search for funds for two tank projects will certainly face problems.

The Wilk armored forces modernization program is still in its earliest stages. The army is still studying the possibilities and proposals – and still has not chosen a tank for purchase. Taking into account various circumstances and factors, it is possible to predict the further development of events and imagine how the current work will end.

Apparently, Poland by the end of the decade will have to abandon the T-72M1 and PT-91 tanks due to the exhaustion of the resource and the impossibility of full service or modernization. Only German-made vehicles will have to remain in service, which are planned to be updated in a few years according to the Leopard 2PL project.

The purchases of completely new equipment are still in question. To do this, the Polish Ministry of Defense needs to complete ongoing research and select an MBT for purchase. You also need to assess the possibilities, draw up plans and get the approval of the country’s leadership. Which tank will be chosen and what the procurement plans will be is a big question.

Regardless of the results of the Wilk program, the K2PL project is of great interest from a technical point of view. South Korean engineers offered an interesting option for improving the serial tank by introducing new components and assemblies. However, outside the “Polish” context, the future of this project is also in question. The K2 tank, which is notable for its excessive cost, has not yet become the subject of an export order. And it is very likely that its new modification will not change this state of affairs.