On water and under water

At the beginning of the 20th century, two types of ships began to develop in the navies of the leading countries of the world: surface ships (NK) and submarines (PL), the design and tactics of which were radically different. However, before the appearance of submarines with a nuclear power plant (NPP), submarines could be called rather underwater surface, since the imperfection of electric batteries of that time did not allow them to stay above water for a long time. Even the invention of the snorkel only partially solved the problem, since the submarines of that time were still tied to the surface of the water.

French boat Narwhal 1900. The submarine used a steam engine to move on the surface and electric motors, recharged from a steam generator, to move underwater.

Nevertheless, the location of the submarine at the interface between the two environments was not an end in itself, but a forced measure, and later, as technology improved, submarines began to be under water more and more of the time. The emergence of nuclear power plants provided submarines with practically the time spent under water, limited rather by the endurance of the crews than by technical obstacles.

Since in the first half of the 20th century, submarines most of the time moved on the surface, with short-term dives to attack a target or evade a strike, the submarine hulls of those times had a bow design with a pointed nose, optimized for better seaworthiness. As the submarines spent more and more time under water, the shape of their hulls more and more moved away from the shape inherent in surface ships, acquiring characteristic teardrop-shaped outlines.

One of the most famous hybrids of a surface ship and a submarine can be considered the domestic small submersible missile ship of project 1231, developed since the 1950s of the XX century, which was a missile boat capable of submerging and moving under water, which provided greater stealth compared to conventional missile boats at a surface speed higher than that of conventional submarines.

It was assumed that the submersible missile ship of project 1231 would be able to act from an ambush, covertly waiting for the enemy, or just as covertly independently advance under water in the direction of the enemy. After detecting a target, the diving ship ascends and at maximum speed reaches the range of a missile strike. The advantage of the approach was to be greater resistance to enemy aircraft. At the same time, there were no air defense systems on the project 1231 ship. 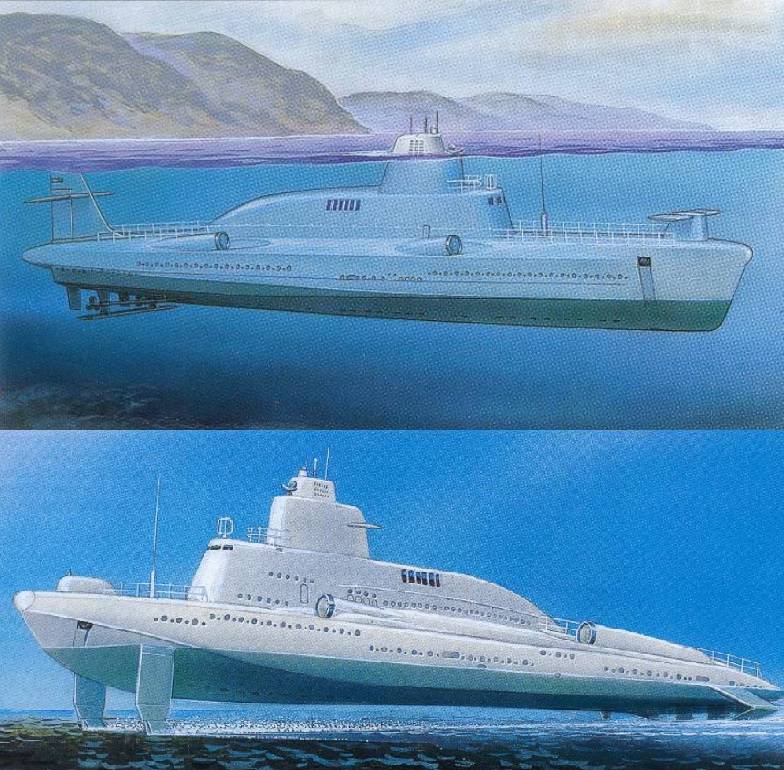 In fact, the project 1231 submersible missile ship had a low speed and underwater range. The shallow depth of immersion in the absence of air defense allowed enemy aircraft to freely use anti-submarine weapons. The disadvantages include the increased complexity of the design, as well as the imperfection of the design due to the lack of experience in the construction of “hybrid” ships of this type.

A modern example of a diving ship is the project of the 21st century warship SMX-25, presented by the French shipbuilding concern DCNS at the Euronaval-2010 naval exhibition. The length of the SMX-25 is about 110 meters, the underwater displacement is 3,000 tons. The semi-submerged hull has an elongated shape optimized for high surface speed. As conceived by the creators, the SMX-25 submarine frigate should quickly, at a speed of 38 knots, arrive in the combat area, and then go under water and secretly strike the enemy. 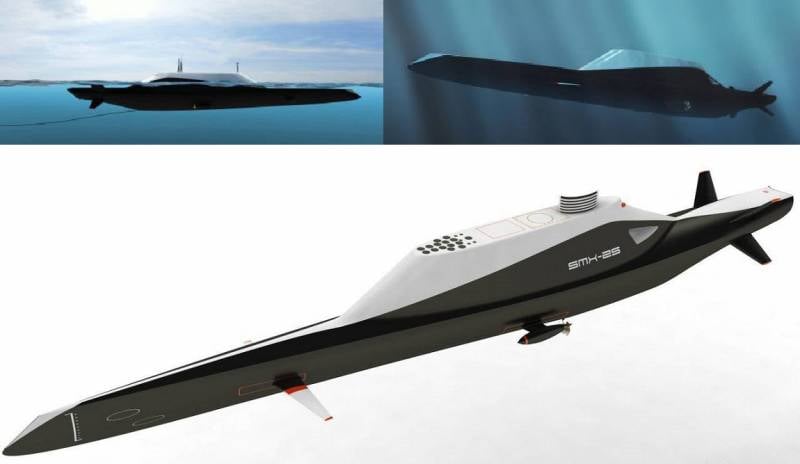 It is characteristic that the Soviet project 1231 and the French project SMX-25 have the main mode of movement on the surface, and the underwater one is intended only for “sneaking up” to the enemy. In the conditions of saturation of the battlefield with various sensors, it can be assumed that a ship moving at high speed will be detected long before approaching enemy forces, and after submersion, it is found and destroyed by anti-submarine aviation forces.

Another “hybrid” vessel can be considered a high-speed submarine project of the British company BMT. The SSGT Submersible Gas Turbine Submarine should be capable of cruising at near-surface depth at a speed of 20 knots, with an acceleration capability of up to 30 knots.

The air supply for the turbines is carried out through a retractable shaft, essentially a snorkel. The submarine hull shape is optimized to minimize the influence of near-surface waves. In a fully underwater mode of movement, the movement is carried out at the expense of fuel cells with an autonomy of up to 25 days. 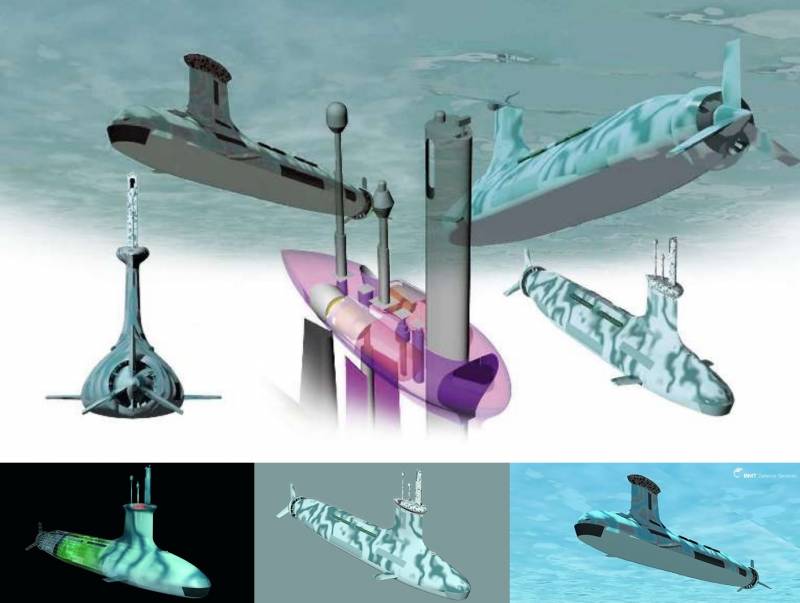 Unlike the Soviet project 1231 and the French project SMX-25, which are more likely surface ships with the ability to submerge, the British project of the “hybrid” ship is rather a submarine. Nevertheless, the submarine of the SSGT project is firmly attached to the surface, since its supposed advantage – a high speed of movement, is realized only when moving in the near-surface layer with an extended air intake device.

Indirect mention can be made of semi-submersible transport vessels, such as, for example, the Chinese ship Guang Hua Kou. In them, the ability to partially submerge is not used to gain advantages in battle, but for loading and transporting bulky cargo – oil platforms, surface ships and submarines. 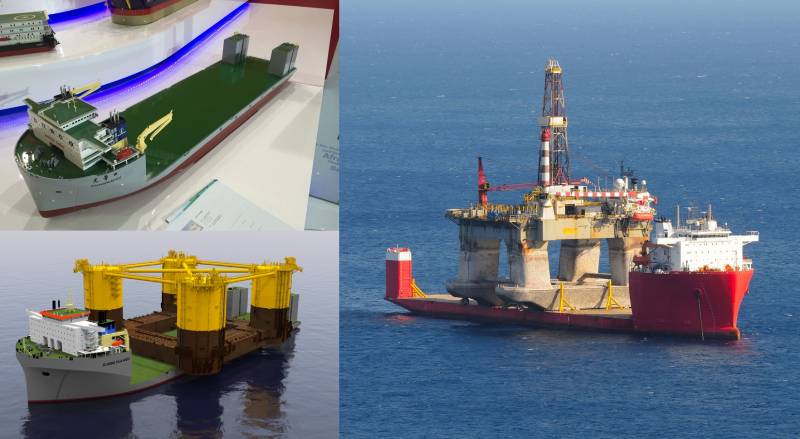 In addition to the projects of diving and semi-submersible vessels discussed above, there were other projects, for example, to create semi-submersible tankers for transporting oil and gas in the Far North. One of these projects was proposed by Yuri Berkov, Candidate of Military Sciences, who served in the Northern Fleet, and later a leading employee of one of the defense research institutes of the USSR / RF Ministry of Defense, in the publications From Fantasy to Reality and My Underwater World, which, among other things, considered problems of movement of ships in the near-surface layer. In general, it is difficult to say how many such projects and studies are in the classified archives of the Ministry of Defense, specialized institutes and design bureaus, so the topic can be worked out much deeper than it seems. 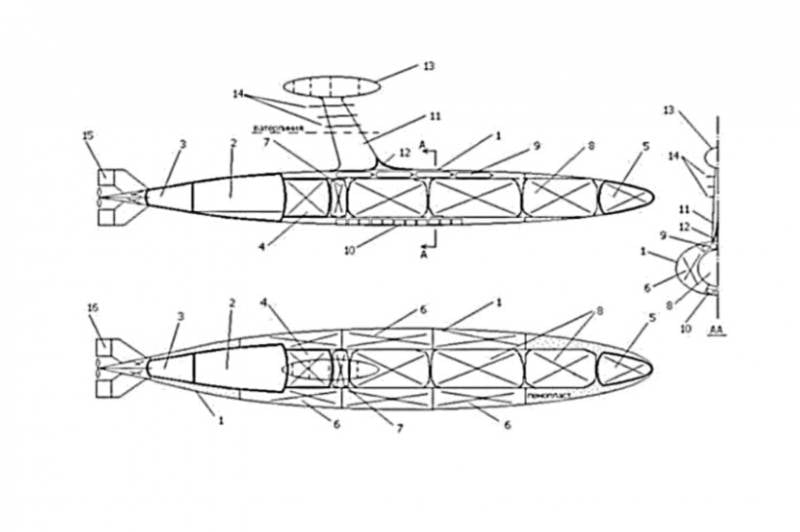 Sketch and description of the underwater tanker Yuri Berkov

Are there factors now that may require the development of submersible / diving ships? After all, apart from conceptual projects, no country in the world produces such ships? There is no doubt that diving ships will be more difficult and more expensive than traditional ships. What then is the meaning of their creation?

If we talk about reducing visibility, then this task is successfully solved by the layout of the surface of ships in accordance with the canons of stealth technology. Movement under water for the purpose of camouflage will be better carried out by a submarine of classical design, which does not need to be close to the surface. 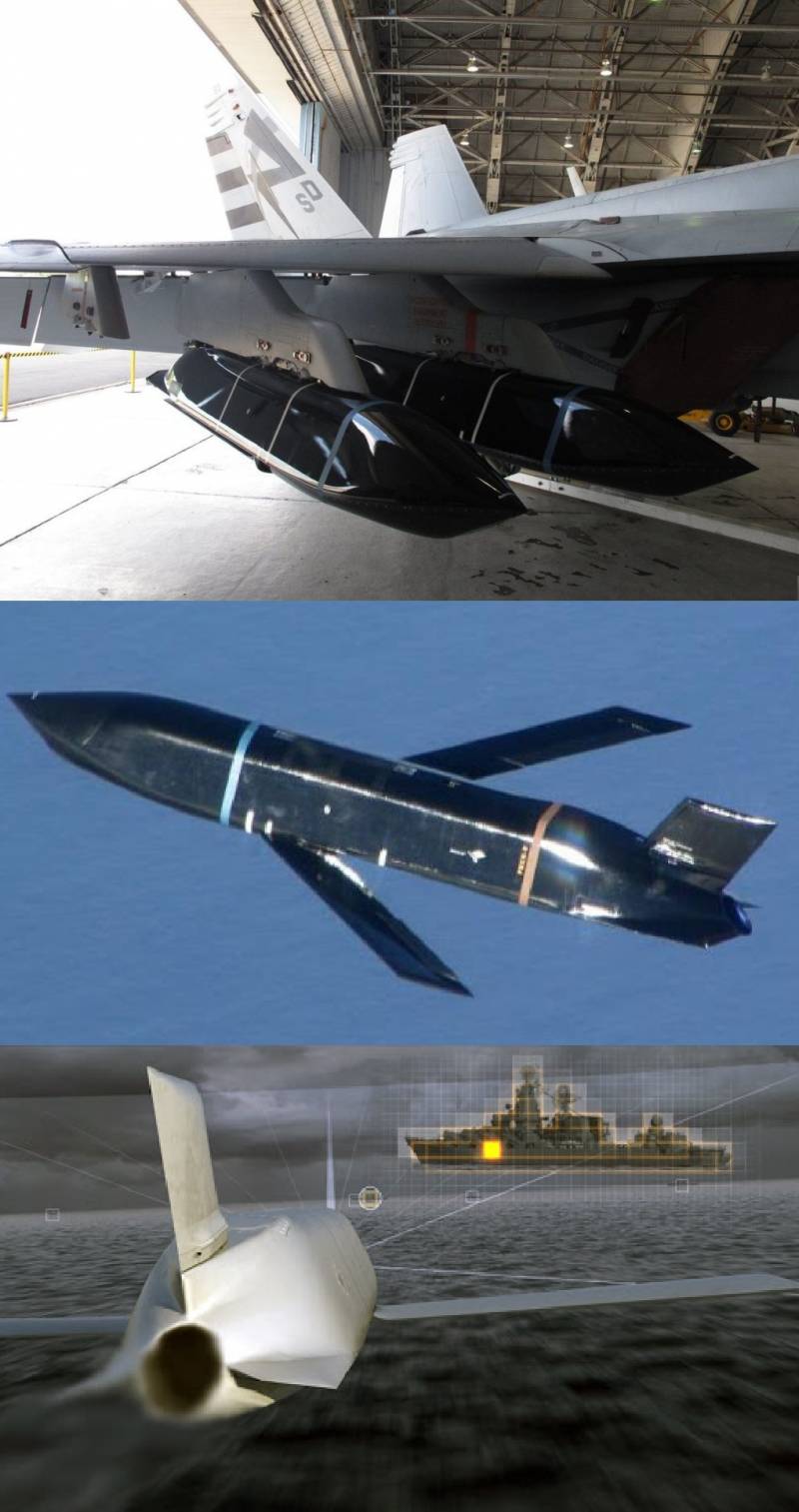 The LRASM anti-ship missile system is described in detail in the article by Andrey from Chelyabinsk “On the revolution in the US naval art. RCC LRASM “.

Building a surface fleet capable of withstanding a massive attack by anti-ship missiles is beyond Russia’s power in the foreseeable future.

Earlier, Voennoye Obozreniye published articles by Oleg Kaptsov about the advisability of recreating battleship-class ships at a new technological level, the armor of which would be able to withstand the strikes of anti-ship missiles.

The concept of a promising battleship

Without going into the missile-armor confrontation, it can be assumed that in Russia, which is unable to build destroyer-class ships, it will be practically unrealistic to build a battleship. But the Russian industry has not yet forgotten how to build submarines.

But it is impossible to abandon surface ships in favor of building submarines alone, since the latter cannot completely replace surface ships, primarily due to the impossibility of providing air defense (air defense) of the combat area. Equipping submarines with anti-aircraft missile systems (SAM) capable of operating from under water, from periscope depth, discussed in the article On the border of two environments. The evolution of promising submarines in conditions of an increased likelihood of their detection by the enemy will allow submarines to solve limited tasks of defense against enemy anti-submarine aviation, but in no way provide air defense of the area.

Even the equipment of submarines with long-range air defense systems, discussed in the articles “Nuclear multifunctional submarine: an asymmetric response to the West” and “Nuclear multifunctional submarine: a paradigm shift”, will not allow replacing surface ships. In the considered form, AMPPK are intended rather for raider actions: reaching the line, striking at airborne aircraft and surface ships of the enemy, followed by covert withdrawal, but not to provide air defense of the combat area.

Perhaps the solution is in diving ships operating on the border of two environments? The concept of a diving surface ship, its advantages over classic surface ships and a place in the Russian Navy will be considered in the following article.