Submarine “High Moon” built by the Netherlands. Photo by the Ministry of Defense of Taiwan

For several decades, the Republic of China has tried unsuccessfully to upgrade its submarine forces, faced with the problem of obsolescence of technology. Several years ago, it was decided in principle to build new submarines on their own. In accordance with it, a new shipbuilding plant was built, which will have to solve the newly set tasks.

There are currently only four diesel-electric submarines in the Taiwanese fleet. All of them serve at the Kaohsiung Naval Base on the southwestern coast of the island. The construction of such a submarine force began in the seventies, and the oldest submarines still remain in service.

In 1973-74. The United States, by way of assistance, handed over to Taiwan two diesel-electric submarines of the Tench project, built during the Second World War. The ships “Hai Shikh” (“Sea Lion”) and “Hai Pao” (“Sea Leopard”) partially covered the needs of the Navy, but their great age led to a lot of restrictions. Active operation of the two Tench boats continued until the appearance of newer ships.

In 1981, the Republic of China ordered from the Netherlands two diesel-electric submarines of the “Hai Lun” (“Sea Dragon”) type. They were developed on the basis of the Dutch project Zwaardvis with some changes. The ships were laid in 1982 and 1983, and in 1986 they were launched almost simultaneously. In October 1987, the lead ship Hai Long was included in the Taiwanese Navy, and a few months later they raised the flag on the Hai Hu (Sea Tiger) boat. 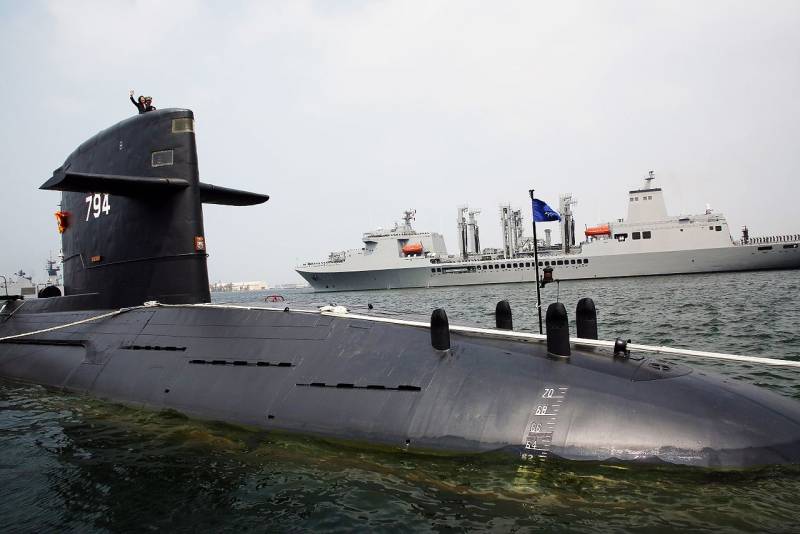 Boat “Hai Hu” in the port. Photo by the Presidential Administration of Taiwan

Due to moral and physical obsolescence, the “Sea Lion” and “Sea Leopard” are unsuitable for combat service and are used as training ships. Newer “dragons” continue to serve and regularly go to sea. Several years ago, they were modernized, replacing part of the equipment and updating the weapons. Now two diesel-electric submarines carry not only 533-mm torpedoes, but also Harpoon missiles.

Soon after receiving the Dutch-built submarines, the Taiwanese Navy was concerned about the further renewal of the submarine forces. Initially, it was planned to buy new ships from the main partner, the USA. However, the American side refused such a deal. In accordance with the Law on Cooperation with the Republic of China, the United States could not sell offensive weapons to it, which, among other things, included submarines.

The search for alternative suppliers began. The purchase of equipment from different countries was considered. We also appreciated the possibility of acquiring a license for the independent construction of submarines. Such searches continued for several years and did not yield any results for organizational and economic reasons.

In 2001, the American authorities revised their policy towards Taiwan and allowed the sale of various weapons and 8 submarines to it. However, new difficulties arose. The US has not built diesel-electric submarines for a long time, and the search for a supplier has begun. Germany and the Netherlands refused to build diesel-electric submarines for Taiwan. Italy was ready to sell submarines from stock – but the customer wanted new ships. In 2004, the United States offered to acquire a foreign license and build diesel boats at one of the American factories. This idea also did not give the desired results. 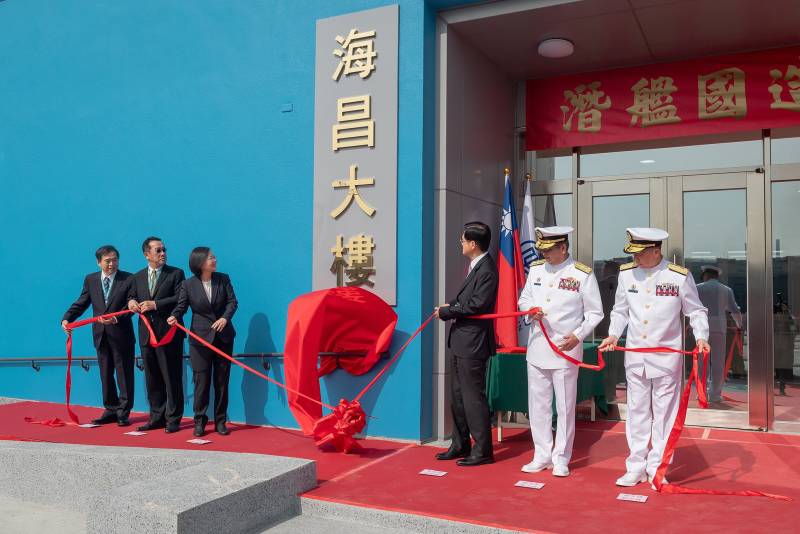 Opening of a new plant. Photo by the Presidential Administration of Taiwan

By the middle of the 2000s, all measures to update the submarine forces actually stopped. Subsequently, Taiwanese officials have repeatedly argued that the Republic, with the help of foreign partners, is capable of building its own diesel-electric submarines. Conversations of this kind continued for several years – and again had no real consequences.

Only in 2014, the National Program for the Development and Construction of Submarines was launched, calculated for several years in advance. The National Zhongshan Institute of Science and Technology became the main executor of the program. It was planned to involve a number of own companies and enterprises in the work. In addition, Taiwan counted on various support from the United States.

One of the first steps in the National Program was the laying of a new shipyard in Kaohsiung. This enterprise was created for the China Shipbuilding Corporation (CSBC) and was immediately intended for the construction of submarines.

In 2017, the Republic of China and the United States signed a memorandum of cooperation in the development and construction of submarines. In 2018, the US authorities approved the export of a number of technologies. The range of companies involved in cooperation and the list of transferred products, licenses and technologies has not yet been disclosed. 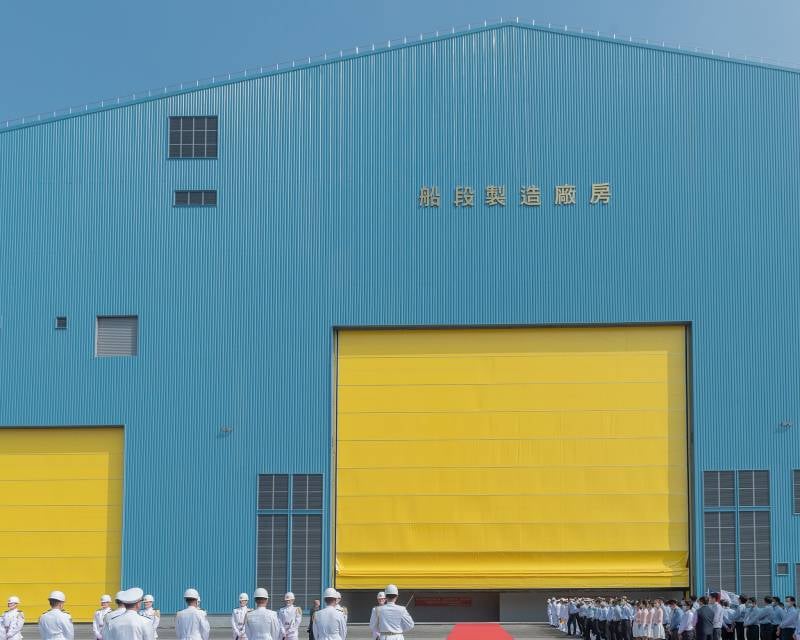 Boathouse, from which new ships will emerge. Photo by the Presidential Administration of Taiwan

On November 24, 2020, the opening ceremony of the new shipyard took place. In the near future, the plant in Kaohsiung will begin full-scale operation and lay down the first submarine developed by the Zhongshan Institute. The exact date has not yet been announced, although the general plans have already been announced.

The head diesel-electric submarine of its own Taiwanese project will be laid down in 2020-21. Several years are allocated for construction and testing, and no later than 2025 it should become part of the Navy. CSBC has no experience in building submarines, but it is assumed that foreign colleagues will help it cope with such a difficult task.

In total, the Navy plans to receive eight boats of the new project. The timing of their delivery was not named. Probably, the last ships will begin service no earlier than the mid-thirties. The appearance of eight new diesel-electric submarines will lead to a sharp increase in the number of submarine forces, and will also make it possible to withdraw obsolete units from the fleet.

The first to be replaced will be outdated diesel-electric submarines of the Tench type, which have long developed a resource and do not suit the fleet even as training ones. Newer diesel-electric submarines of the “High Moon” type will continue to serve. Due to the recent modernization, the service life has been increased by 15 years. Two such submarines can serve until the early thirties. By the time they are decommissioned to develop the resource, the Taiwanese Navy will have several ships of the new project.

As follows from the well-known reports, the National Zhongshan Institute has already developed a new submarine project. Its designation was not disclosed; technical aspects also remain unknown. At the same time, at a recent event, a model of a new submarine was demonstrated, reflecting the main aspects of the project. 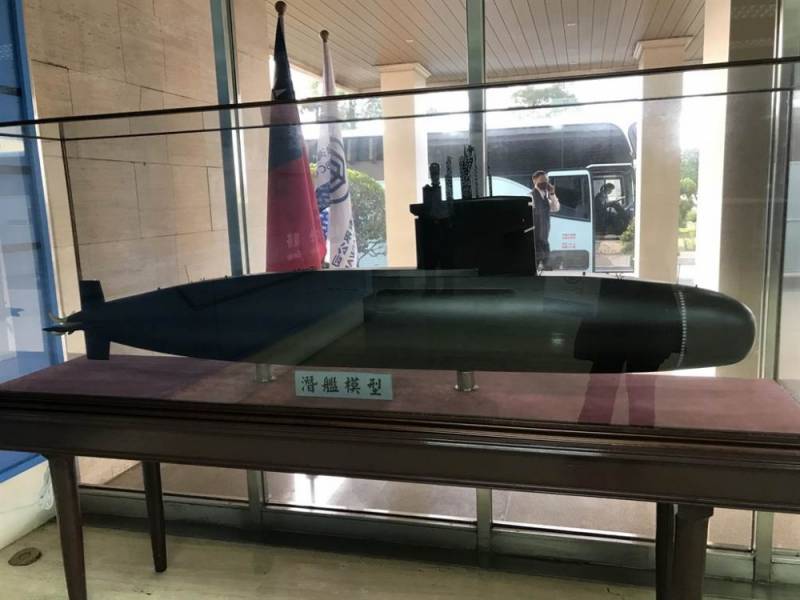 It is envisaged to build a submarine of traditional architecture with a fairly large deckhouse fence and a single-rotor power plant. Apparently, a single-body design is proposed with the division of internal volumes into several compartments. The type of power plant is unknown. It is possible to preserve the traditional diesel-electric system or introduce an air-independent one – if you have your own developments or through the acquisition of someone else’s technologies.

Probably, the complex of weapons will continue to be built on the basis of a set of torpedo tubes. They will be used to launch torpedoes and anti-ship missiles. It also requires modern hydroacoustic equipment and an information management system. Perhaps they will be ordered abroad.

Eight instead of four

Currently, the state of the submarine forces of the Navy of the Republic of China leaves much to be desired. Nominally, there are only four submarines, and only two can go into combat service – moreover, these are outdated ships. In terms of the number and quality of pennants, the Taiwan submarine fleet is obviously inferior to any combination of submarine forces of the main enemy in the person of the PLA Navy.

After years of waiting, arguing and solving various problems, the real work has begun. A new shipyard has been built and put into operation, which in the next 10-15 years will provide the fleet with eight new submarines. This will not solve all of Taiwan’s defense problems, but it will significantly improve the current situation. It is not known whether it will be possible to complete all the assigned tasks on time. However, the current situation – against the background of past events – is already conducive to optimism.