If you take a short excursion into the history of the creation of ammunition, it can be noted that centerfire cartridges have replaced and practically supplanted rimfire cartridges, with the exception of the smallest calibers. There were quite obvious reasons for this course of things. The new cartridges turned out to be more reliable and also resistant to external influences. In addition, gunsmiths around the world have the opportunity to realize higher combat characteristics compared to the previous generation of ammunition. Most of the cartridges produced today on the planet are centerfire cartridges. Perhaps the most famous exception is the .22 LR (5.6 x 15.6 mm) cartridge, which is a unitary rimfire cartridge.

By the end of the 19th century, it was finally clear that centerfire cartridges were far ahead of their competitors. Despite this, some hairpin cartridges were delayed in production until the early 20th century, and some types of rimfire (sidefire) cartridges still do well on the market today. But also cartridges with a central location of the primer did not immediately take their place on the market. It took quite a lot of time to find the optimal designs and the best solutions. Initially, this was due to the low level of technology. In particular, the industry did not have a working technology for the manufacture of solid-drawn sleeves, since the main sleeve designs of those years were based on manual assembly from individual components. This approach had obvious and obvious drawbacks. At a relatively cheap cost, such sleeves did not have sufficient tightness, strength, but the most obvious disadvantage of manual assembly was dimensional instability. 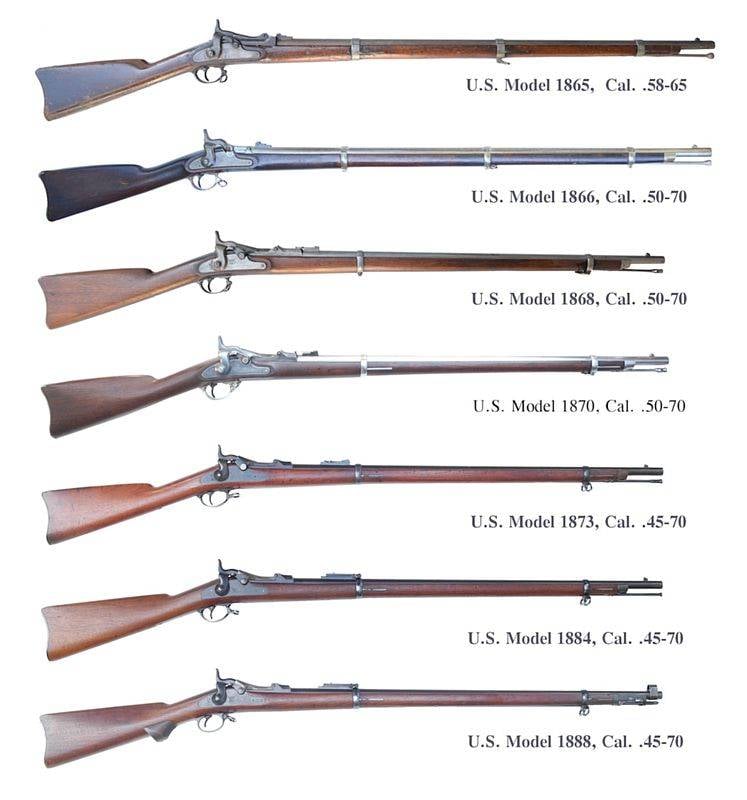 Despite this, experiments to create new cartridges were carried out in many countries. One of the first attempts to create a centerfire cartridge was carried out in France: a patent for a similar cartridge, obtained by Jean Pauli on September 12, 1808, has survived to this day. For a long time, all such attempts ended, in fact, with nothing. At the same time, some designers continued to work with paper sleeves, trying to create a new centerfire cartridge on their basis. Such attempts continued even in the middle of the 19th century. In the United States, a patent from 1852 from New York gunsmiths Frederick Goodell and William Martson has survived. The designers have created a centerfire cartridge with a paper sleeve and a leather bottom.

An important milestone in the development of centerfire cartridges was the development of the Englishman Charles Lancaster, who in the same 1852 proposed a new cartridge with a cylindrical flanged sleeve, which was entirely made of brass. The design proposed by Lancaster had its own characteristics: a circle of paper with a primer was placed inside the sleeve in the center of its bottom part, and on top the circle covered a brass disc with four holes in the center. The disk was firmly fixed in the bottom of the sleeve by crimping its walls. In this cartridge design, the primer composition was clamped between the flat bottom of the sleeve and the brass disc. At the time of the shot, the drummer of the weapon crushed the bottom of the sleeve, the primer composition broke against the brass disc.

A similar design was experimented with in the United States. Designers from Springfield and Frankford Arsenal developed new ammunition for the American army. The first centerfire cartridge in the United States, which was adopted by the army, had a small steel bar in the bottom of the sleeve, on which the primer shattered when the striker hit. This cartridge was the well-known .50-70 Government, created for the US Model 1866 Springfield rifle. The designer of this cartridge, which had a very unusual ignition system, was the inventor from the United States, Edwin Martin. The .50-70 Government cartridge, loaded with black powder, in the actual caliber of 13.1 mm, at a distance of 457 meters, pierced pine logs 183 mm thick. 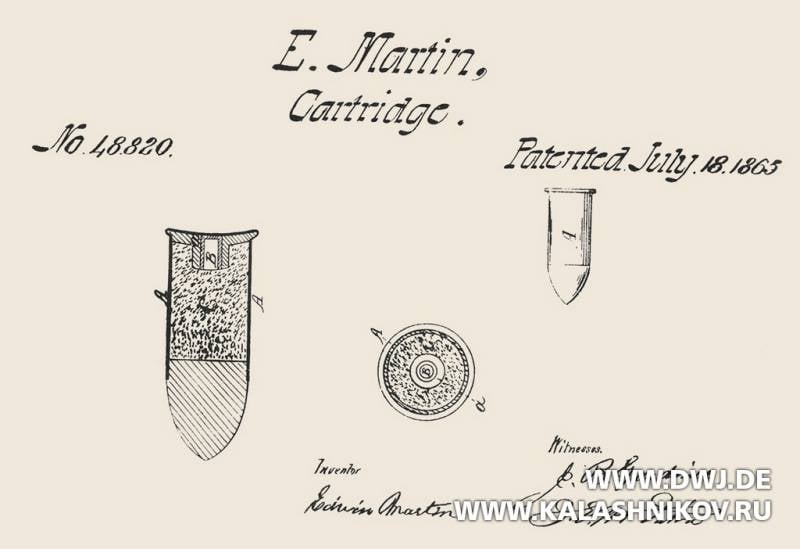 Drawing from Martin’s patent of 1865, the slightly concave bottom of the sleeve is clearly visible

American inventor Edwin Martin of Springfield, Massachusetts has focused his efforts on developing an extended primer cartridge case. At the same time, Martin originally designed the original central ignition system, which used a glass capsule. To prevent the possibility of unauthorized ignition, a slightly concave shape has been given to the cartridge’s normally flat-bottomed capsule. Martin filed a patent for his new cartridge on July 18, 1865. Despite the registration of the patent, the project did not become more successful because of this. The ignition system proposed by Martin proved to be too costly for organizing the mass production of ammunition. The second problem was fragile glass capsules – there was a danger of accidental detonation when loading cartridges.

Despite the first setback, the American designer, rich in ideas, decided to redirect his efforts to create his own central ignition system, as well as technologies that would make the production of new cartridges available. Having received financial support from business representatives, Martin began new survey work. During the design, he came to the conclusion that before the cold drawing of the bottom of the liner, in three additional transitions, it would be possible to create a central cavity in which the igniting charge would be located. When the cavity is filled with a flammable substance, it can be covered with a metal circle, which will act as a miniature disc-shaped anvil. In the course of further work, the slightly thickened leading edge of the capsule fixed the anvil. So the design of the cartridge in an article for the German Weapons Journal (DWJ) was described by Dr. Manfred Rosenberg.

Drawing of Martin’s cartridge, the capsule socket of a given shape and the disc-shaped anvil are visible

In the created documentation for the new ammunition, Edwin Martin outlined his ideas about different options for the central ignition system, the presented cartridge was protected by a patent on March 23, 1869. At the same time, already when organizing the mass production of new cartridges, a simplified version of the system developed by Martin was chosen. In general, we can say that the main distinguishing feature of Edwin Martin’s cartridges was a rather deep and wide groove in the bottom, which was the result of work on molding the place for the location of the capsule. According to the Martin system, a whole line of cartridges was produced in the United States, their release was carried out by the Frankford Arsenal. In addition to the .50-70 Government cartridges, there was also .50-60 Peabody ammunition with a similar ignition system. For a long time they were produced by Union Metallic Cartridge Co. (UMC) and Remington Arms Co. (RA).

When comparing, one can find a clear similarity between ammunition with the ignition systems of Martin and Benet, who introduced his cartridge around the same time. Both cartridges had a sleeve with a rim and a central ignition system, while the ammunition was structurally different. The main drawback of the cartridges was that, due to the more or less complex design of the sleeve, such cartridges could not be re-equipped, and if this could be done, then only with the utmost effort. Including for this reason, both ammunition quickly disappeared from wide circulation. This was also facilitated by the emergence of a new Berdan cartridge with a simple ignition system, which made it easy to re-equip. 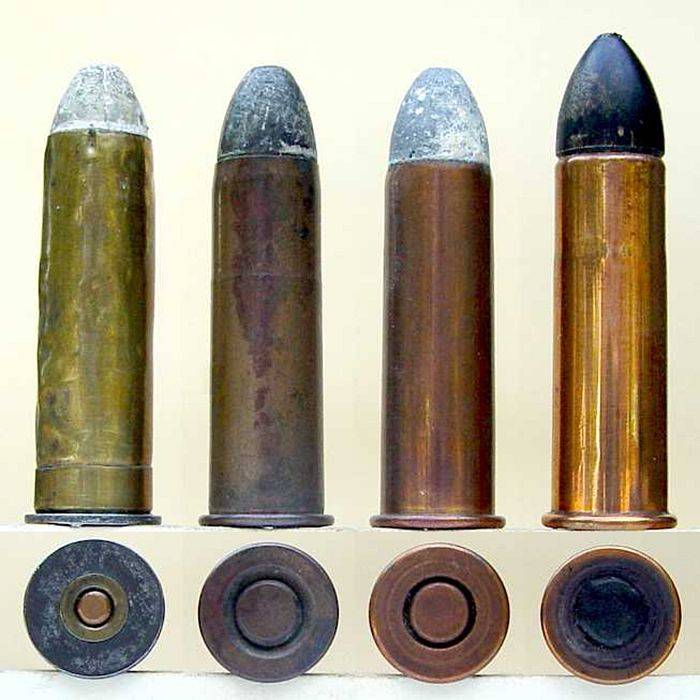