“Who owns space, he owns the world.”

This phrase, uttered by American President Lyndon B. Johnson in the early 1960s, is more relevant today than ever.

Let’s make a small digression to the topic of reconnaissance satellites. In a recently published article Perspectives of radar systems on nanosatellites, the possibility of creating satellite constellations for remote sensing based on small-sized satellites – cubesats, with radar stations (radars) operating in the aperture synthesis mode is considered.

Moreover, only receivers can be installed in the reconnaissance satellites themselves, and existing sources are used as emitters. In particular, transmitters of satellite communication systems can act as sources. In this case, the more satellite receivers, the less power can be used to work, since the signal from several receivers will be integrated, which will increase the signal-to-noise ratio by the corresponding number of times.

This feature brings us back to SpaseX’s Starlink Global Internet Project. Given the number of Starlink satellites, they may well be used as an active part of the Earth radar reconnaissance satellite network. Moreover, it is not at all excluded that this project will subsequently be taken up by SpaseX itself within the framework of some conditional StarEye project, implemented in the interests of military and / or civilian users.

In the longer term, space-surface orbital systems will be developed, capable of striking stationary ground, buried protected targets, and later on mobile targets on the ground, on water and in the air. 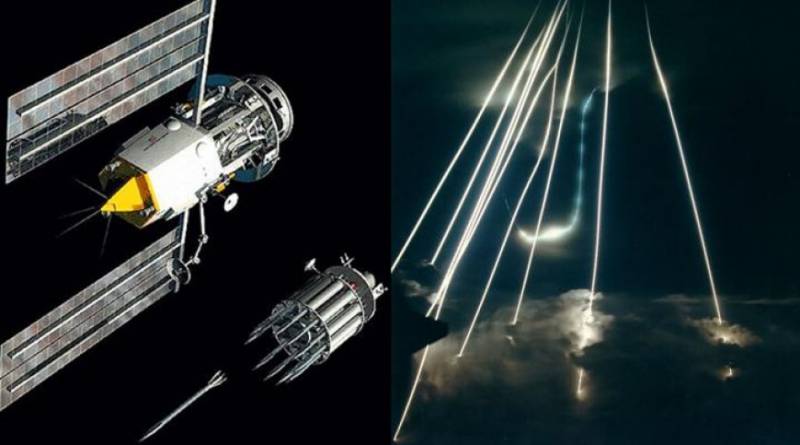 As we mentioned in the previous article, the task of missile defense is in many ways similar to the task of destroying enemy spacecraft. And its solution with the help of interceptor missiles is ineffective in terms of cost / efficiency.

However, there are other methods of destroying enemy space vehicles – this is the use of space-to-space weapons.

Unlike the United States, which regards interceptor missiles as a priority weapon, the Soviet Union relied on military satellites.

Since the beginning of the 60s of the XX century, the air defense forces of the USSR began developing the Satellite Fighter (IS) program. And already in 1963, the world’s first maneuvering satellite, the Polet-1 spacecraft, was launched into space. And in 1964, the Polet-2 spacecraft was sent into space. 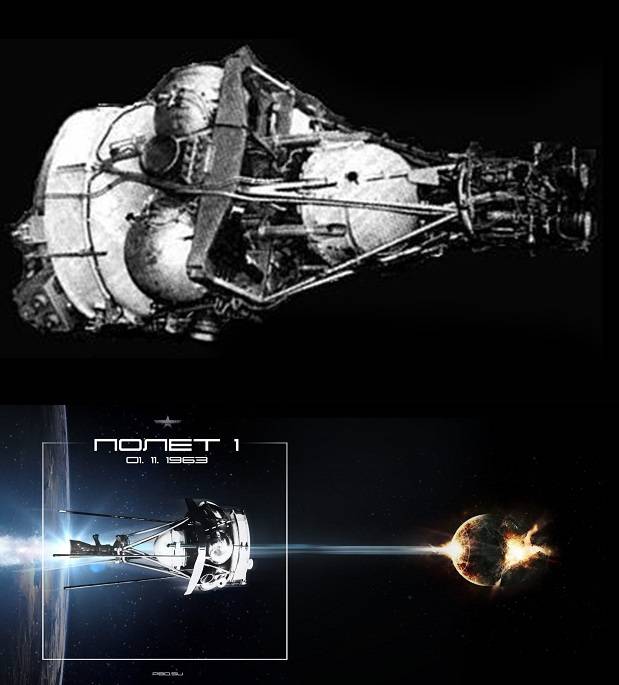 Spacecraft of the Flight series could change the altitude and inclination of the orbit over a wide range. Theoretically, the fuel supply allowed them to fly even to the moon.

The Polet series spacecraft were guided to the enemy’s satellites from the ground control and measuring control station according to the radar and optical observation points. The IS itself was also equipped with a radar homing head (radar seeker).

Since 1973, the IP system has been accepted for trial operation. The enemy’s satellites could be intercepted at altitudes from 100 to 1,350 kilometers. 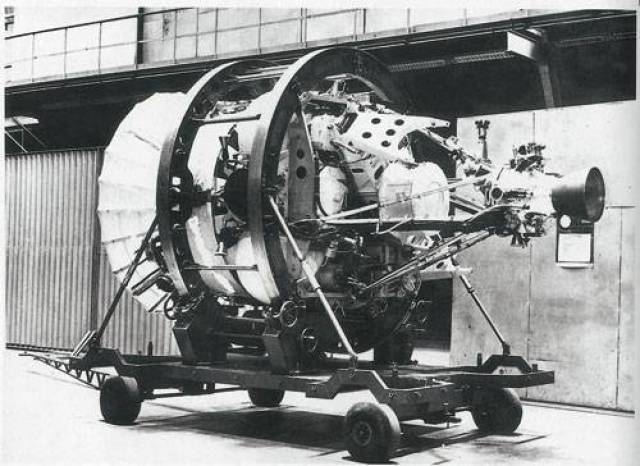 Serial spacecraft of the IS-M system

The newer is the spacecraft “Kosmos-2519”. It is assumed that the Kosmos-2519 spacecraft can be carried out on the Karat-200 platform (developed by NPO Lavochkin), capable of operating in orbits up to geostationary. 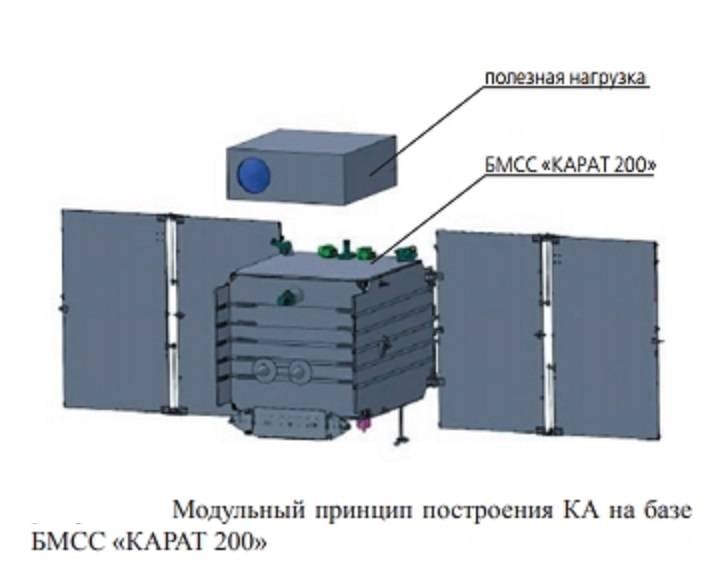 Image of the satellite on the platform “Carat-200”

In July 2020, the Interfax news agency announced the successful testing of another satellite inspector. And in January 2020, the Russian satellite-inspector “Cosmos-2543” approached the American reconnaissance satellite at a distance of about 150 kilometers. Then the American satellite corrected its orbit.

The tasks carried out in orbit by the “inspector satellites” are classified. It is assumed that they can read intelligence information from enemy satellites, jam signals or otherwise interfere with their work. And finally, the very probability of active maneuvering in orbit presupposes the possibility of destroying the enemy spacecraft by ramming – by self-destruction of the “inspector’s satellite”.

Similar systems are being created by our “partners” – the United States and China. 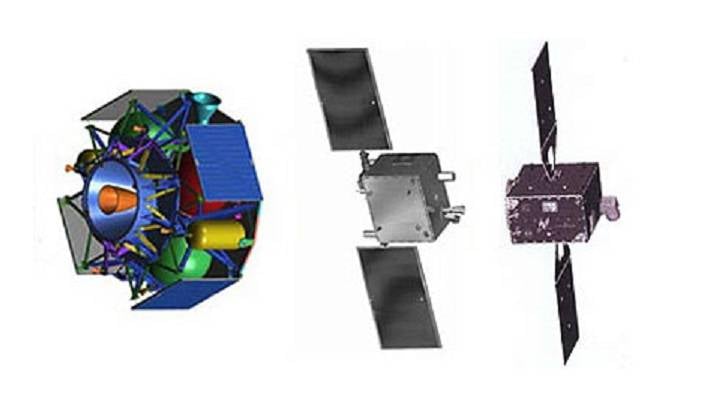 Image of the MiTEX satellite with an accelerator

In China, satellite convergence experiments and robotic arm tests were carried out on the Chuang Xin 3 (CX-3), Shiyan 7 (SY-7) and Shijian 15 (SJ-15) vehicles. The official purpose of these spacecraft is to clean up space debris. 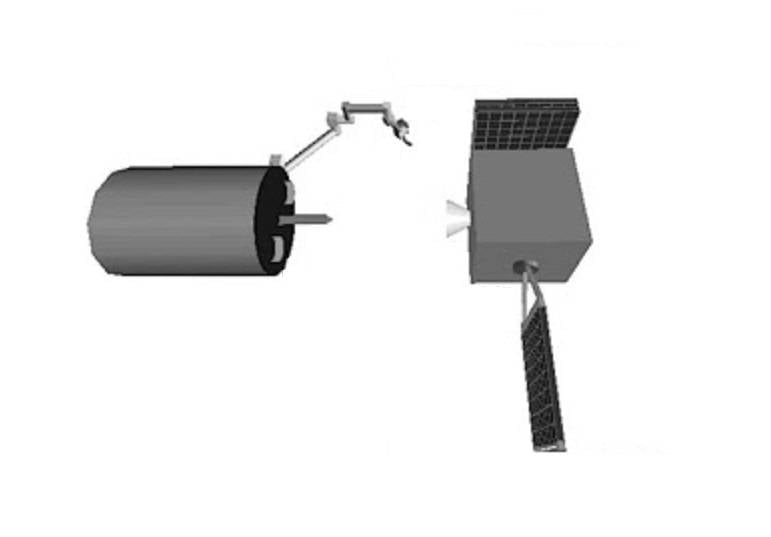 In 2010, two Chinese spacecraft SJ-6F and SJ-12 deliberately collided with each other. With a high probability, this was a test for the possibility of their use as a space-to-space weapon.

However, all government projects have one distinctive feature – the products created within their framework are distinguished by an extremely high cost. Considering that promising intelligence and communications groups can be built on the basis of much cheaper commercial solutions, this approach is unacceptable.

One of the options for solving this problem is the use of commercial spacecraft, developed to remove space debris from orbit, to destroy enemy satellites.

Theoretically, the problem of space debris removal itself may well become relevant in connection with the rapid increase in the number of satellites in low orbits, as well as with their unplanned failure with the loss of the possibility of forced deorbiting and / or destruction into small fragments.

Visualization of the increase in the amount of debris in orbit from 1957 to 2015.

It is planned that as part of the first test mission, the ClearSpace-1 spacecraft will lift the spent stage of the Vega LV with a mass of about 100 kilograms from an altitude of 600-800 kilometers. 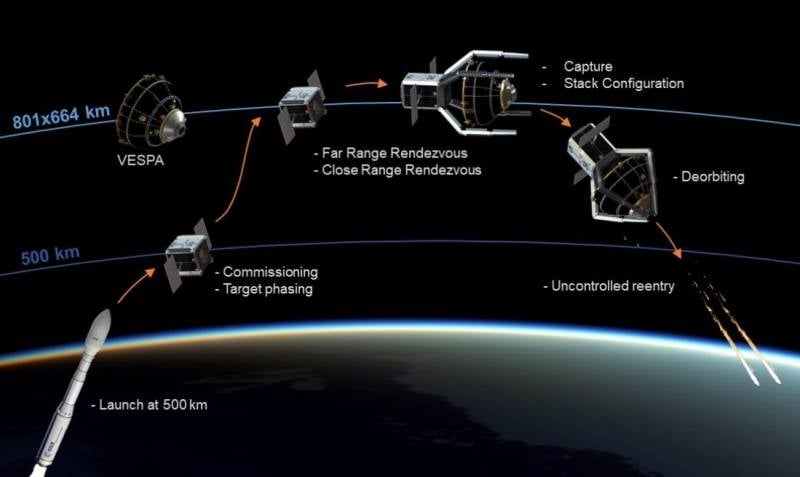 Scheme of the ClearSpace-1 spacecraft

The ClearSpace-1 spacecraft will capture the spent stage by robotic arms, after which it will burn with it in the atmosphere. In the future, more complex missions are planned, in which ClearSpace-1 will try to capture and destroy several pieces of space debris at once.

In the British project RemoveDEBRIS, which is being developed by Surrey Satellite Technology and the University of Surrey, it is planned to capture space debris with a network or a harpoon capable of piercing the spacecraft body. 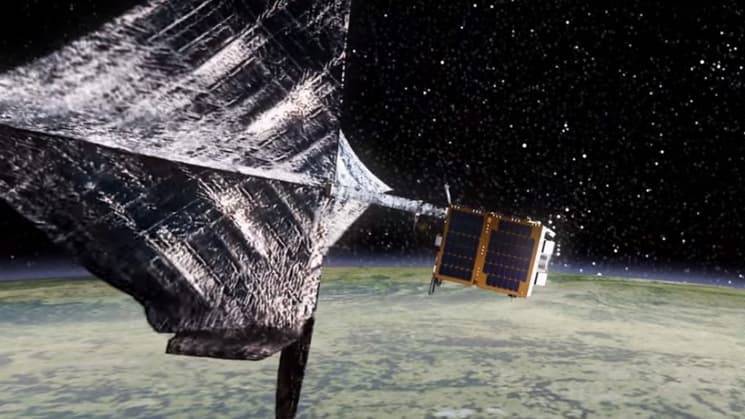 It is assumed that the RemoveDEBRIS spacecraft will be able to sequentially collect several objects and bring them out of orbit, burning together with them in the atmosphere.

The first experimental launch is to be carried out by the Soyuz LV from the Baikonur cosmodrome in March 2021. An experienced satellite of Astroscale Holdings Inc., measuring 110×60 centimeters and weighing 175 kilograms, will have to collect imitation debris, and then enter the Earth’s atmosphere and burn with it. 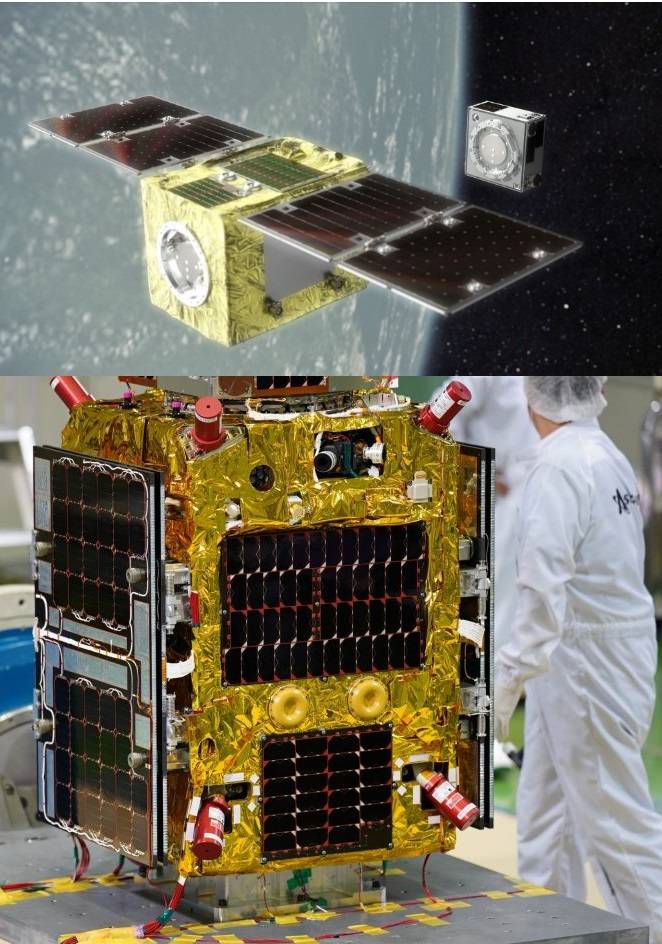 Among civilian, albeit not commercial, spacecraft, one can recall the Japanese probes Hayabusa-1 and Hayabusa-2.

The spacecraft data are intended not for cleaning up space debris, but for approaching asteroids, landing a controlled module on them, extracting soil and its subsequent delivery to Earth.

It should also be noted that the Hayabusa-2 spacecraft was equipped with a Small Carry-on Impactor (SCI) module, in fact, which is an ammunition operating on the principle of a “shock core”. In fact, Japan has tested conventional weapons in space – in the future, the “strike core” may well be used for military purposes. 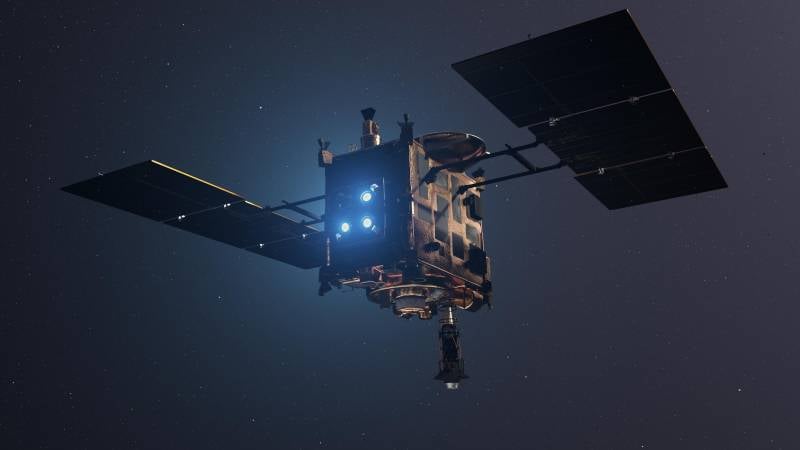 Image of the Hayabusa-type spacecraft

The topic of commercial spacecraft, developed for the removal of space debris from orbit, is not limited to the above projects.

There are much more startups and projects in this area.

There are similar projects in Russia. However, they are being developed by government agencies – GK Roskosmos, JSC Russian Space Systems. This means that you should not expect a low cost from them. In the best case, the developments on them will be in demand in the promising Kosmos satellites. 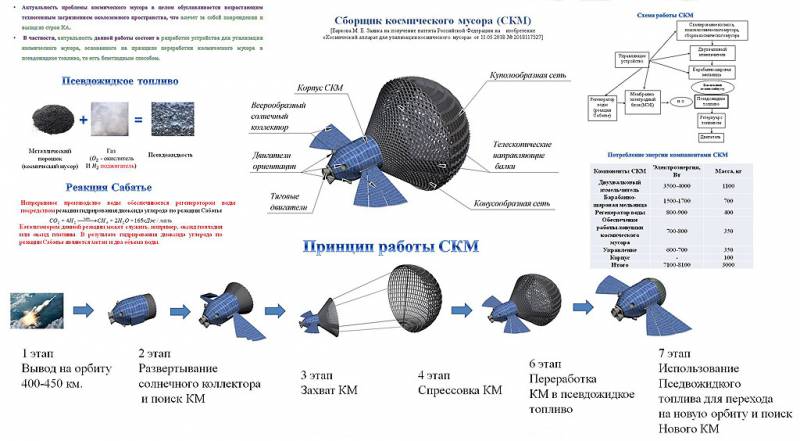 Infographics on the Russian satellite for the processing and disposal of space debris – the plans are, of course, ambitious.

As with Capella Space’s Starlink communications satellites and Earth remote sensing satellites, the military can be expected to be interested in orbiting cleaner projects.

In fact, as part of the creation of orbital cleaners, all technologies are being tested to solve the problems of destroying enemy spacecraft and satellites, including:

– target detection;
– the output of the spacecraft to it;
– maneuvering and approaching the target;
– shelling of targets (capture);
– Destruction of the target by penetration or vault from orbit.

The question of price remains.

In general, if we are talking about the vault of space debris from orbit, and not about its secondary use (by processing in orbit or by lowering it to the ground in the shuttle’s cargo hold), then these undertakings will not bring profit. You can get a grant, master it by building a spacecraft to remove debris from orbit, but you will hardly be able to commercialize it – there are not many altruists in the West. The task of cleaning the orbit itself is unlikely to be paid by space agencies systematically – for example, one-time orders.

But the military may well be interested in the most interesting projects. And after a little refinement, to get effective and inexpensive anti-satellite weapons. Their development, testing and even deployment can be carried out under the slogan of clearing the orbit from space debris.

And in fact, the deployment of space-to-space weapons will be organized?