We have become English more than once
In battles they dulled
But the gold of the English us
Bought at the market.
Robert Burns. Scottish glory

Weapons from museums. This article was born like this: one of the readers of “VO”, having read an article about Scottish broadswords, took and wrote to me that, in addition to very peculiar broadswords, the Highlanders also had very interesting pistols, one might say, unique, more never met. “Write about them, interesting!” And yes, indeed, this is a very interesting sample of weapons, and it was possible to write about it for a long time, but there were no interesting photographs and illustrations. And then suddenly all the “stars converged”, and at the same time both were found. Well, if so, it was only a matter of technique to write about these Scottish pistols.

These pistols are called by the British and the Scots call the Highland Pistol or Scottish Pistol, which translates as “highland pistol” or “Scottish pistol”. Although they have another interesting name, indicating the place of their appearance: pistols from Dong. 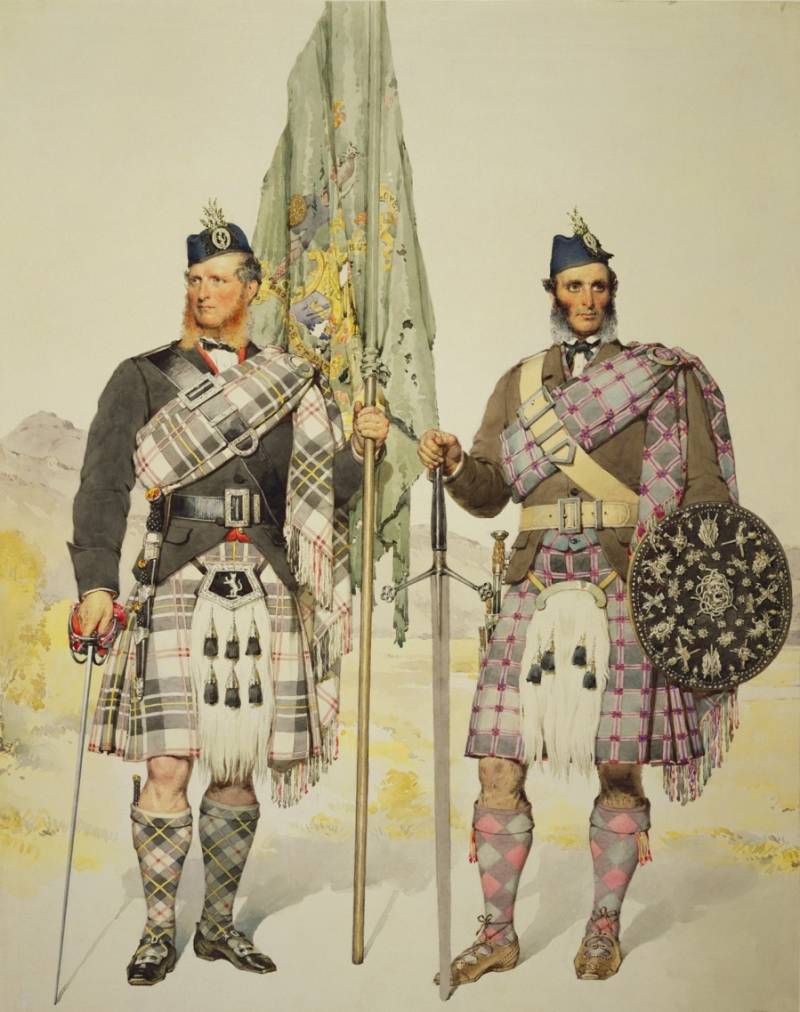 Please note that, in addition to photographs, the article uses excellent illustrations, in which we see the Scottish Highlanders in their national costumes with characteristic weapons in their hands. They were painted by Kenneth MacLay Jr. (1802-1878), a wonderful miniaturist who painted people and their clothes with photographic accuracy. He painted portraits in oil, but was also a recognized master of watercolors. As one of the earliest members of the Scottish Academy of Painting, he exhibited at least five works a year, usually in series. And the most famous series of color drawings in watercolors were images of the Highlanders of Scotland, executed by him for the collection of Queen Victoria, which were then reproduced in the form of lithographs and painted by hand. These include portraits in a highland costume of the late Prince Consort, Duke of Edinburgh, as well as illustrations depicting members of the thirty-five major Scottish clans. Work of stunning volume and quality. Maclay lived in Edinburgh, where he died. In this illustration, we see 18th century clanmen, one of whom is armed with a claymore sword. This is the power of tradition in Scotland

Now a little general, so to speak, the history of pistols in Scotland.

Records of pistol use in Scotland first appear around the middle of the 16th century. For example, it is reported that a wheel-lock pistol was used in the assassination of the Italian secretary to Queen Mary of Scots Mary David Rizzio in 1566. It was followed by the famous assassination of James Stuart I, Earl of Moray, in 1570. He was also shot with a wheeled pistol. Then all pistols were produced either in England or in continental Europe. This is not to say that there were no Scottish gunsmiths in the 16th century, but there were definitely few of them, and they most likely did not deal with firearms. Well, maybe they could fix it.

However, in the early 17th century in Scotland, wheeled pistols with fishtail grips became widespread. They can often be seen in pairs with locks on both the left and right, suggesting that they were intended to be fired with two hands. And it was at this moment in Scottish history that such pistols became a common part of the armament of the high-altitude nobility, often along with a broadsword and a shield (or “target” as the Scots called the shield, and it was often richly decorated and covered with leather), as well as various daggers. 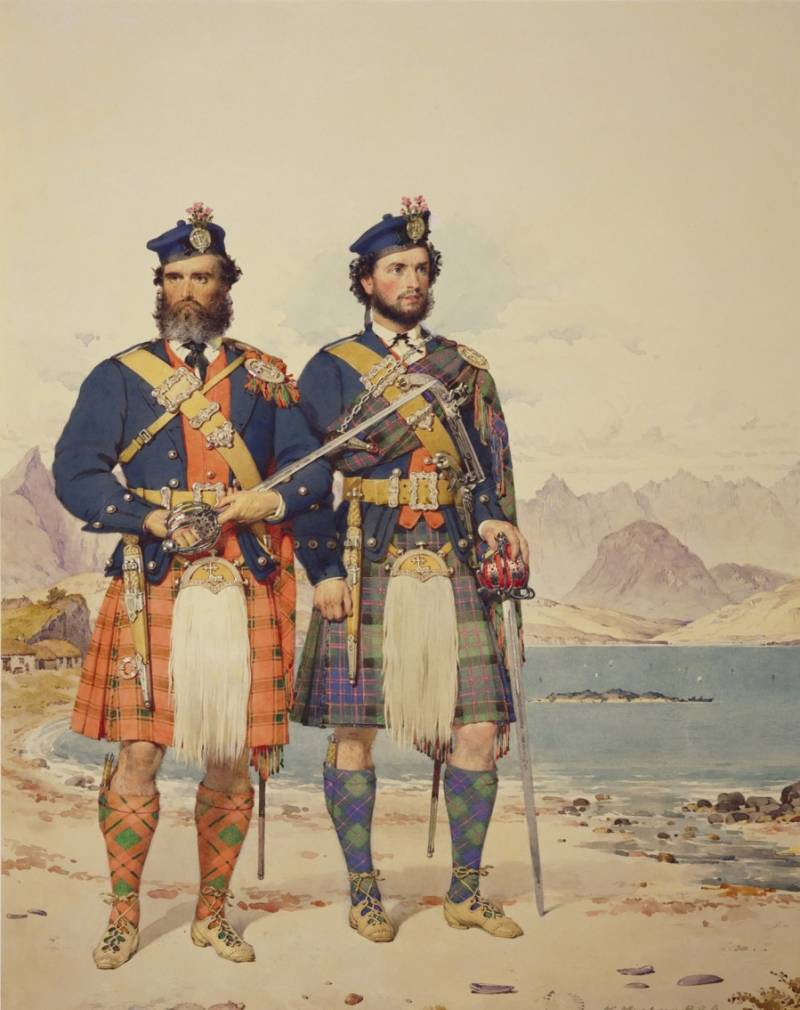 In this illustration, at the highlander on the right, we see two Scottish pistols at once. That’s how it was customary to wear them! Kenney McLay Jr.

Then the wheel lock was replaced by the flint percussion lock, and with it, at the end of the 17th century, a new style of design of such pistols appeared. And it existed until about the end of the 19th century, although by the end of this period, pistols designed in this way became simply a decorative part of traditional mountain clothing. In addition, pistols of this type were later adopted by the British army’s mountain regiments, and officers usually carried them under the left hand.

Their main difference from all others: the all-metal construction of the pistol, the absence of a fence around the trigger and the unique shape of the handle. 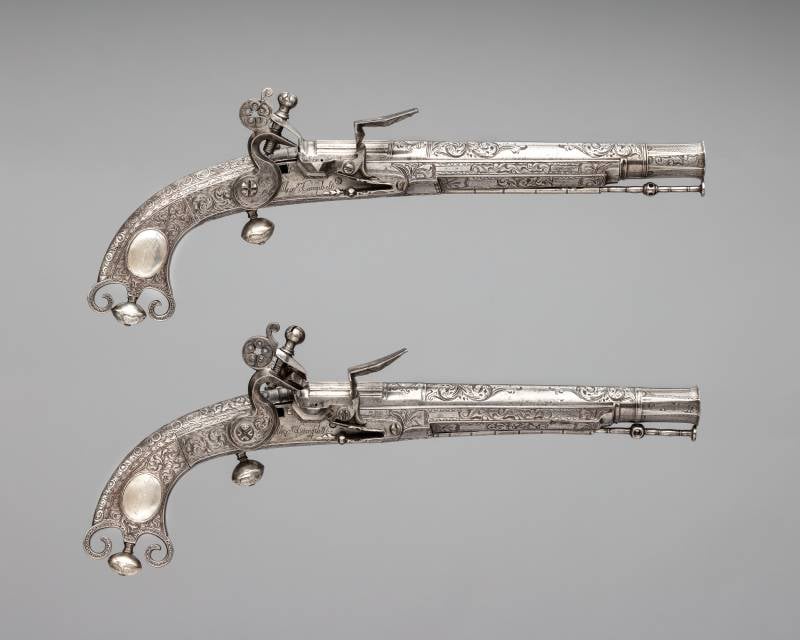 It is believed that pistols of this type originated in the area of ​​the village of Doone in Stirlingshire, which became the center of pistol production in Scotland. Doone was originally a small village located near the city of Stirling, which was once the capital of Scotland. Back then, Dun was at a crossroads where pastoralists used to ferry their livestock from Highland to Sterling and other major cities, and many of the highlanders did their shopping in Dun on their way back home. And since they returned, having sold cattle, with money, they bought pistols there to protect themselves from robbers and raise their authority. At first it was a weapon made in Europe. 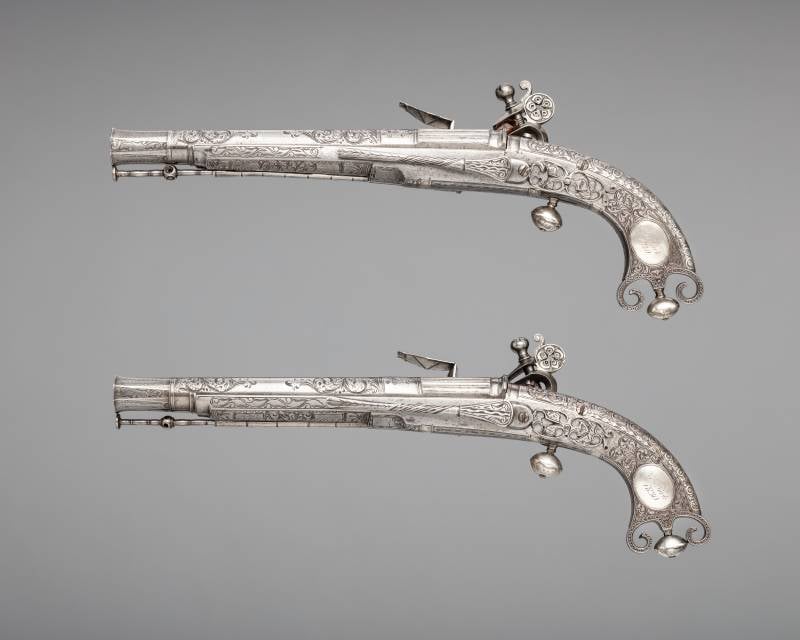 These are the same pistols. Left view. Note that the flat handle allowed a medallion to be placed on it, which could have been inlaid with mother-of-pearl or a strange gem. It was possible to insert a gem of a decent size or just a piece of cut rock crystal with a colored piece of paper under it! Metropolitan Museum of Art, New York

But in 1647, a Flemish refugee blacksmith named Thomas Caddell settled in the Dune and found a second home there. He was a blacksmith by trade, but soon he began making pistols, and his art reached such a level of skill that he became famous throughout Scotland. These pistols used flintlock percussion mechanisms similar to those used by other manufacturers of the time. However, these weapons had certain characteristics that completely distinguished them from weapons made elsewhere. 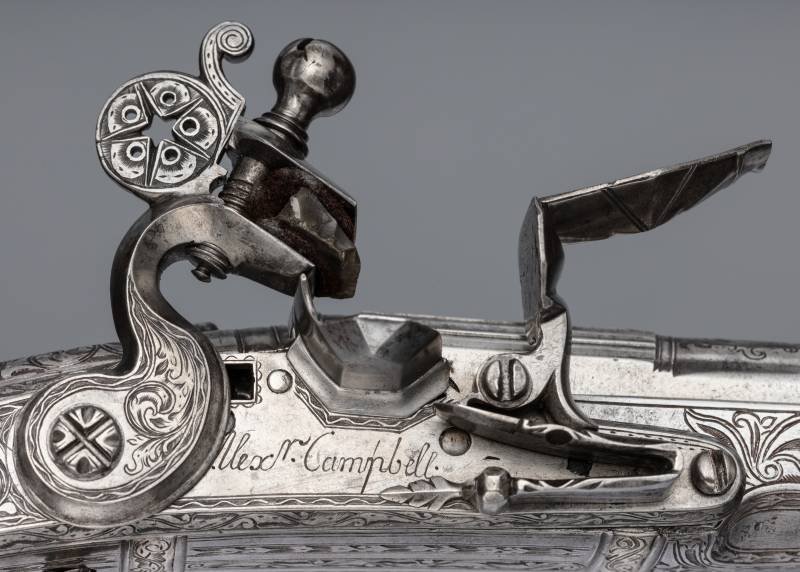 Lock one of the same pistols. The signature says they were made by Master Campbell.

Caddell used the steel welding methods that the Vikings used 700 years ago. This meant that his steel was of a higher quality than many of his competitors. Due to a shortage of suitable wood in Scotland for the manufacture of grips for his pistols, Caddell began to make his weapons entirely from steel. In addition, his pistols had neither a trigger guard nor a safety catch, which made them quicker to fire. 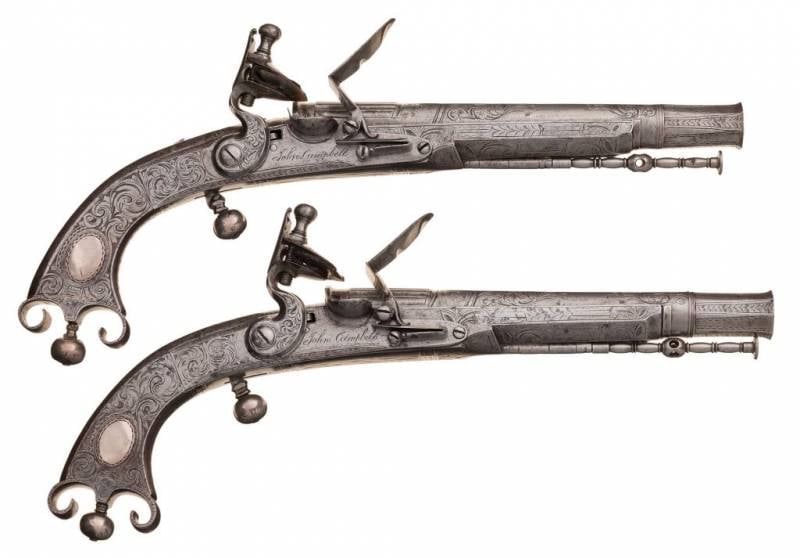 A pair of pistols by John Campbell. Photo from one of the auctions

Under the barrel was a long and again steel ramrod. But the main and most noticeable feature of the pistols from Dong was the handle with curls at the end in the form of ram’s horns or a slotted heart. Usually an “apple” (spherical top) was placed here, which often served as a pencil case. The same pistols had a similar part between the horns, but of a smaller size, which could also be unscrewed and had a thin needle at the end, which could be used to clean the ignition hole of the barrel. 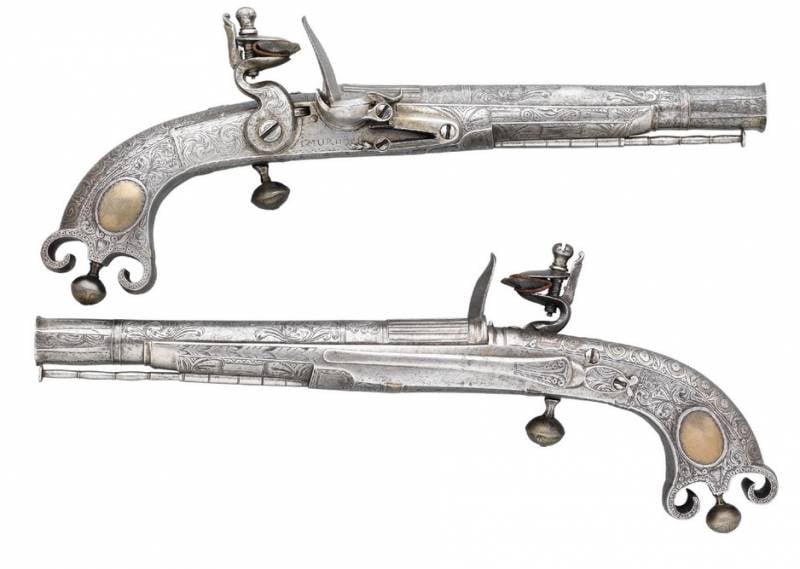 A pair of pistols by Master Murdoch. Photo from one of the auctions

Despite the fact that Caddell’s pistols were more expensive than those of his competitors, their quality and reputation for highly reliable weapons were so high that the Highlanders specially saved money just to buy his pistols! And the weapons of foreign manufacturers were ignored.

Another pistol by Murdoch. Christie’s auction, 1972

The factory, founded by Thomas Caddell, became a family business, run by the family for five generations (interestingly, the founder’s son, grandson and great-grandson was also named Thomas Caddell!). Other pistol factories were opened in the area, many of which were founded by people who worked as apprentices at the Caddell factory: Murdoch, Christie, Campbell, Macleod, etc. 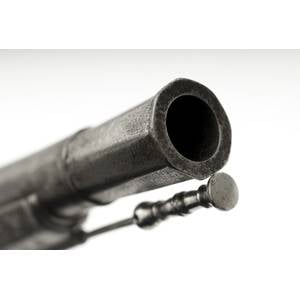 The muzzle of the pistol is made by Murdoch. Photo from one of the auctions

Some pistols produced in these factories were richly decorated with intricate engraving, and gold and silver inlays cost more than 50 guineas. Such pistols were proudly worn by the nobility. But the real “caddell” remained unrivaled. 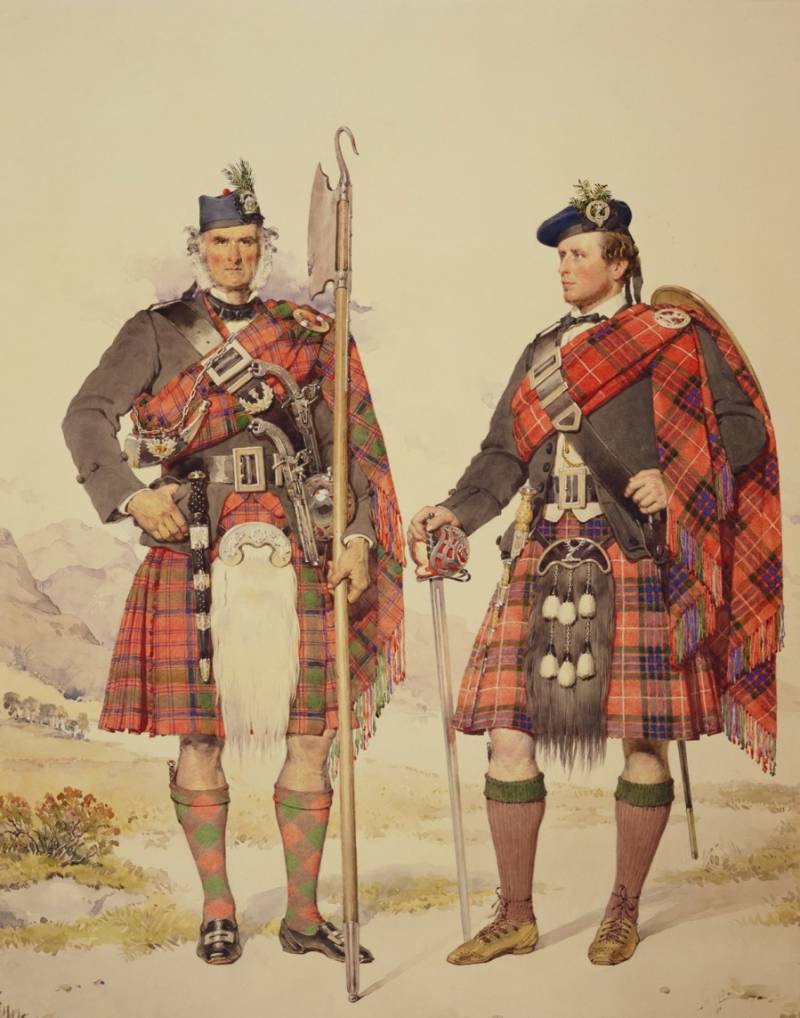 Two more clanmen, one of whom is armed with a creepy ax and a pair of Dun pistols! Kenneth McLay Jr.

These pistols were in high demand, especially among Highlander officers, in the 1730s and 1740s. Later, pistols were made from other materials: brass and bronze. Well, the “golden age” of Scottish armourers fell on the period between 1625 and 1775.

Even when the Scottish-style pistols did not have a distinctive grip, they were still all-metal. Pistol by Master Joe Christie of Stirling, 1754

Presumably, it was the pistol made in Dun that became the first weapon from which the first shot was fired in the American War of Independence, and it was fired by Major Pitcairn, a British officer. George Washington also received from his officers two pistols made in Dun, which he bequeathed to give to Major General Lafayette after his death.

A purely army pistol by Isaac Bissell – a master from Birmingham

The popularity of pistols from Dong was so high that they soon began to be produced in England. Many of the pistols used by the 42nd Highlander Regiment (the famous Black Watch Regiment) during the wars with France and India were actually manufactured by a Birmingham manufacturer named John Blisset.

A richly engraved silver grip pistol made by John Blisset

By about 1795, many Highland regiments had largely abandoned pistols. Due to competition from other European manufacturers, the factories in Dun were also closed, since it was no longer profitable to produce them there. The buildings of the Caddell and Murdoch factories have survived to this day, but they are preserved in the Dun as historic buildings. However, high quality replica Highland pistols are still produced in other countries, such as … India! In fact, today India is one of the main manufacturers of replica pistols from the Dong. 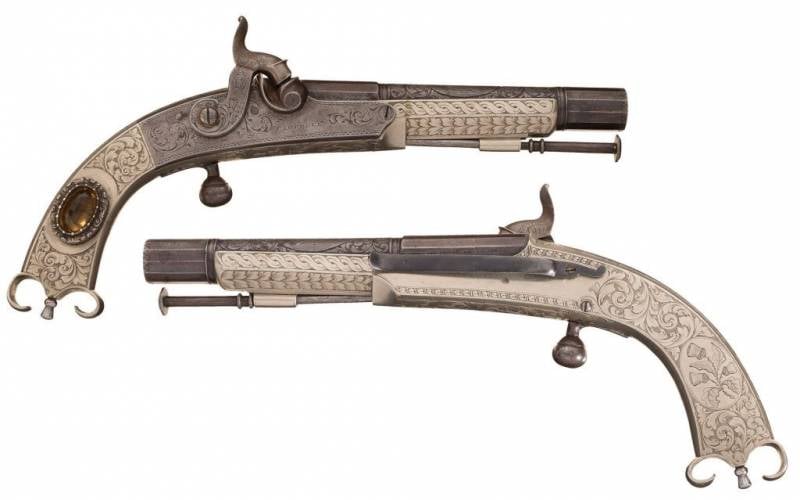 Capsule pistol made by Master Campbell

In 1810, the Reverend Alexander Forsyth invented a new method of ignition using “explosive mercury.” By 1825, “explosive mercury” began to be placed in a copper cap, on which the trigger was hit, and the flame from its charge was transmitted through a special hole to the gunpowder in the barrel. This is how the capsule weapon appeared. In 1822, King George IV visited Scotland for the first time in 200 years. One of the organizers of the visit was Sir Walter Scott, who by this time had already become famous in Great Britain. This visit drew public attention to everything related to Scotland, sparked an explosion of interest in wearing tartan and aroused interest in Scottish weapons. London and Birmingham pistol manufacturers quickly took advantage of this and began producing excellent pistols made in the Scottish style. Among them were primers, otherwise identical to pistols from the Highland. 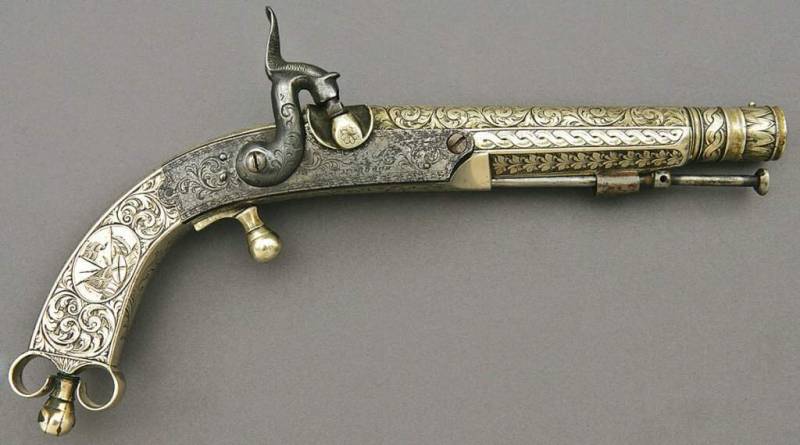 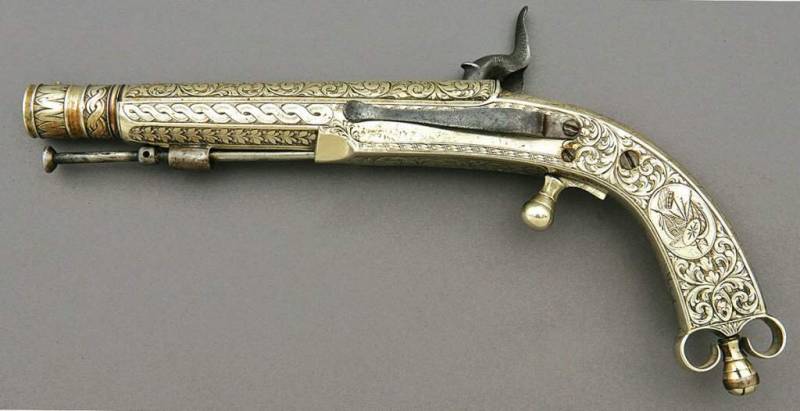 The same gun. Left view. The iron article for the belt is clearly visible and the engraving inside the medallion on the handle, which depicts shields with the image of the Union Jack flag, cannon, cannonballs, drum and flags