Any novelty is usually used until “frayed to holes.” A similar story took place with bayonets. They also began to be installed on pistols, and even on … machine guns. But today we will start with pistols and … revolvers, for which special bayonets were also invented!

He pulled out a pistol,

Like myself, just as plump,
And a six-barreled barrel
He brought the pilgrims to the spot: “Don’t move! If you move,
Rogues! robbers!
“Who Lives Well in Russia” N.А. Nekrasov

The history of weapons. Articles about bayonets aroused great interest of the VO readership, and this is not surprising. After all, it was indeed a very effective weapon, and such it was not for years – centuries! And how many kilometers of intestines are perforated with bayonets and wound on bayonets, probably, it would be enough to cover the distance from the Earth to the Moon and back.

However, in the process of writing these articles and delving into the material itself, one very interesting thing became clear, namely, that the use of bayonets took place not only in long-barreled weapons, but also in short-barreled ones with an important purpose … to add versatility and lethality to it.

The bayonet on the gun originally appeared, performing the functions of protecting the infantryman from the rider. Many infantrymen could bristle with their bayonets so that their horsemen would simply not have dared to attack them, since this would mean certain death for them. And only over time, as, so to speak, the development of military art, the military realized that a bayonet can serve not only as a means of defense, but also an attack, and that bayonets can kill not only horses, but also people. And to finish off the prisoners or the wounded with them, there is nothing easier at all, and then who will be there to disassemble, where and how the enemy is stabbed – upright or already lying on the ground.

And it is clear that, seeing such a high efficiency of the bayonet, the manufacturers of pistols immediately tried to take it into service. When pistols were wheeled and expensive, there were no bayonets yet, but when they appeared, flint locks became widespread, which immediately significantly reduced the cost of pistols. And if the riders, as well as the officers in the infantry, did not need pistols with bayonets, since both of them managed either with a simple sword, or with a saber and a lance, then civilians liked this improvement very much. After firing a pistol once, a person armed with him turned out to be completely unarmed and had to either load it in a hurry, or run away from his opponent, or surrender, giving up his wallet, or even his life. Well, a pistol with a bayonet made it possible to grapple with the same robber hand-to-hand and hit him, if not with a bullet, then with a bayonet!

A set of pistols from Mortimer & Son (photo by Alain Daubresse)

Many pistols equipped with bayonets were produced by British gunsmiths. For example, a pair of pistols from Mortimer & Son. These are pocket pistols with a flintlock, seven inches long, needle bayonets and smooth .52 caliber barrels. The bayonets are on the barrels on the right. They can be reclined and locked in this position. Triggers are also made foldable, which makes them easy to use. The walnut stocks are inlaid with engraved silver flowers and wire curls, and are decorated with engraved overlays that bear the inscription: “Mortimer and Son”. 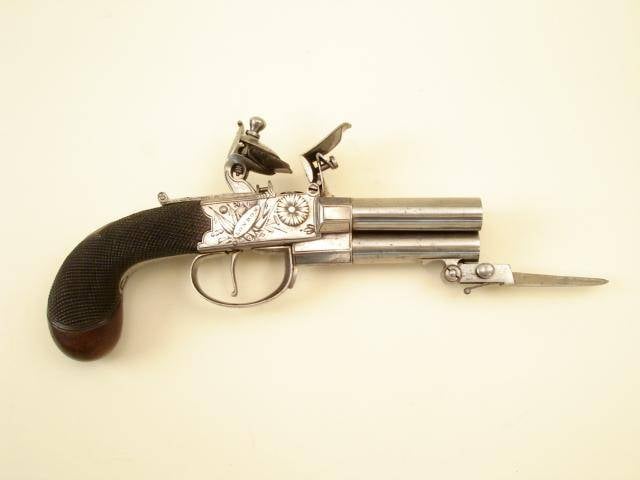 It is clear that two barrels on a pistol are better than one, and three are better than two. But such pistols were difficult to manufacture and maintain, and therefore expensive. Nevertheless, for example, in 1790, the London firm of John Richards even released a three-barreled pistol with rifled barrels that ensure accurate combat, and besides, with a bayonet, which also unfolds if necessary. 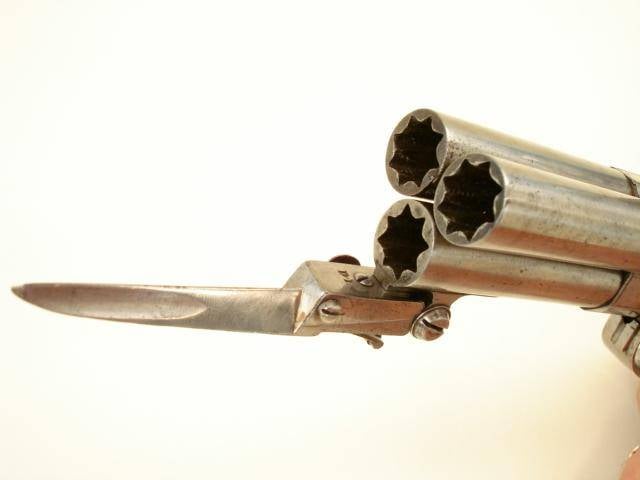 Two barrels of a larger caliber, the third is the lower one, has a smaller caliber (photo by Alain Daubresse)

The pistol is very miniature. However, the lower-most barrel of the smaller caliber is equipped with a triangular spring bayonet. Box lock with engraved panels bears the inscription: J. RICHARDS LONDON. It has a positioning lever for switching the ignition of charges in the barrels (on the left), and behind the trigger there is also a fuse. The pistol really looks like a toy, but it can easily kill a person, especially if you shoot him point-blank and gouge his eye out with a bayonet. 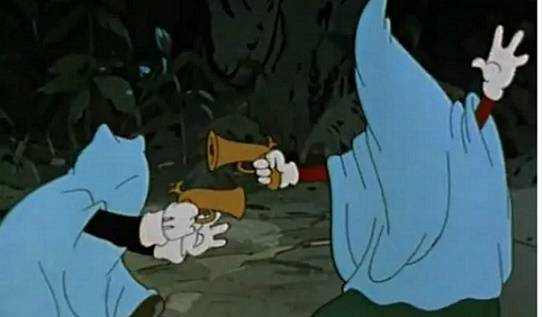 A still from the animated film “The Adventures of Pinocchio” (1959). As a child, I really liked this cartoon, but for a long time I considered the pistols of the Cat and the Fox shown in it to be an artist’s invention … But no, there were, it turns out, such pistols!

Here’s a gun that came straight out of a fairy tale 78 caliber barrel, barrel length 130 mm, engraved with “W. BOND ”and even the manufacturer’s specified address“ LOMBARDS / 59 / LONDON ”. The bayonet is needle, folding, located at the bottom, so the ramrod mount is on the right. 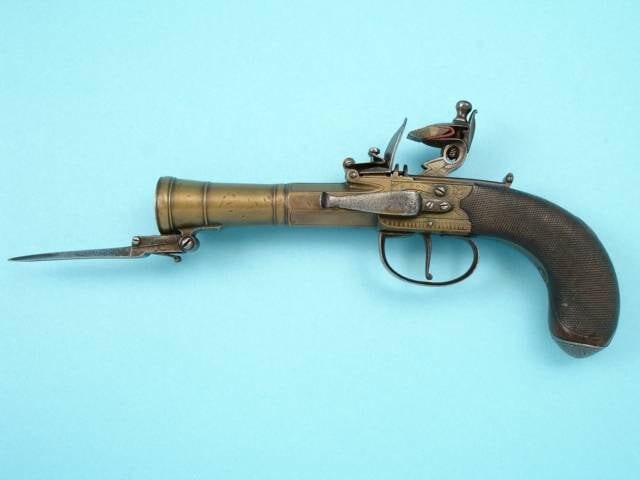 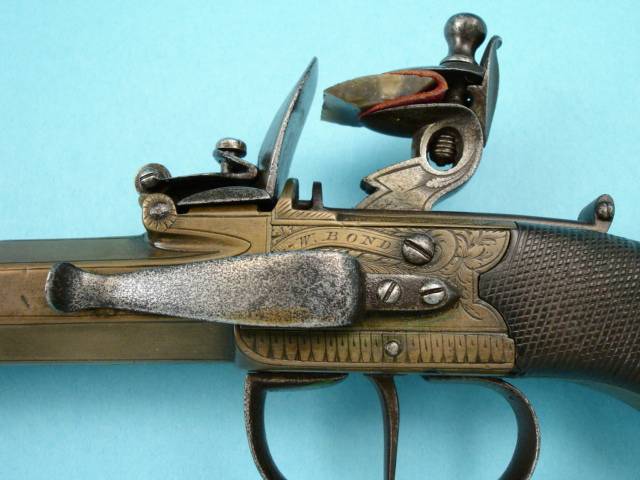 In this photo, you can clearly see the bracket with which the pistol could be fastened to the waist belt! (photo by Alain Daubresse) 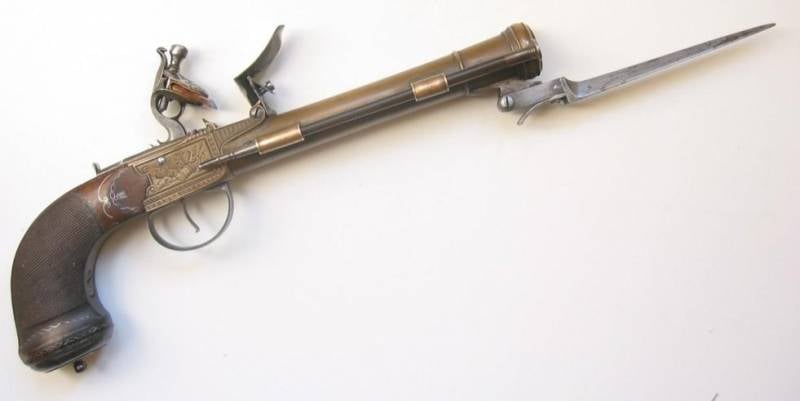 Another pistol with a frightening diameter barrel and, of course, a bayonet! French production this time (photo by Alain Daubresse) 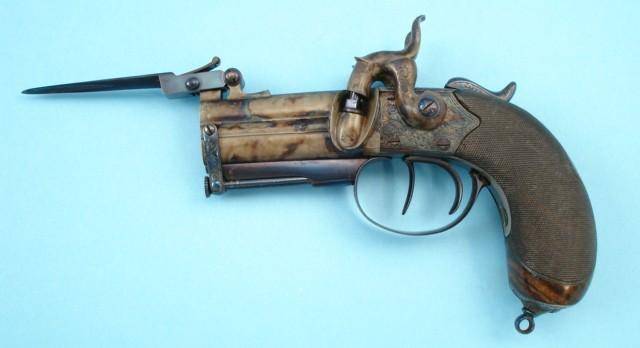 As soon as the primer pistols appeared, bayonets appeared on them. For example, the bayonet had a .32 caliber Potts pistol. He had two barrels located vertically, two hammers, two triggers and two brandtubes respectively shifted relative to the barrels. 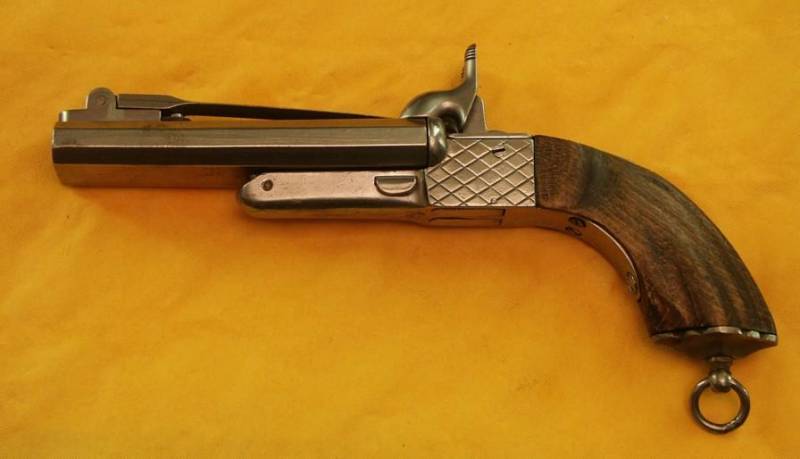 The 10-mm Spanish hairpin bayonet pistol had two barrels arranged horizontally, and a folding bayonet in the hollow between them! (photo by Alain Daubresse) 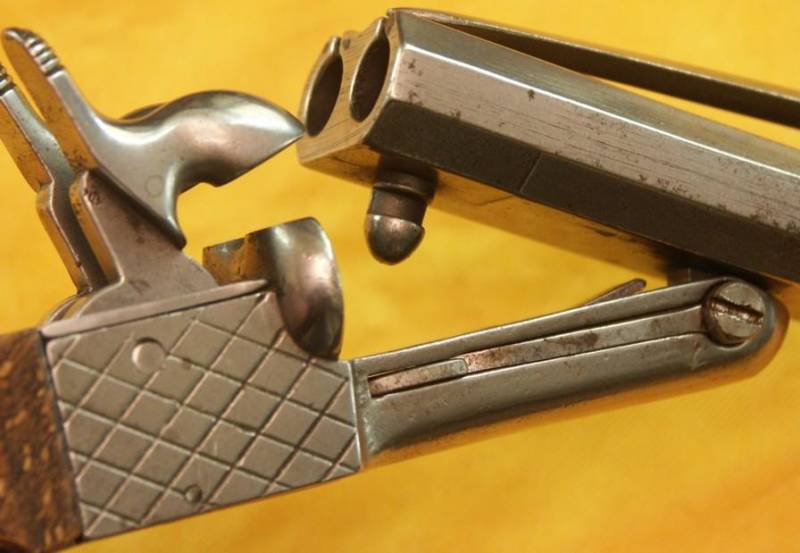 A dagger pistol with two vertically positioned barrels of 0.41 caliber (10.4 mm) chambered for rimfire and … a fixed bayonet between the barrels under a patent of 1868 was also produced by Frank Wesson’s enterprise. The barrels on it were turned manually. Descent – nipple. By the way, the six-barrel revolver-pepper shaker, with which the plump merchant frightened the peasants from the villages “Gorelova, Neelova – Neurozhayka, too …”, could well have a fixed and non-retractable bayonet-lance located in the middle between the barrels, such models are also known. 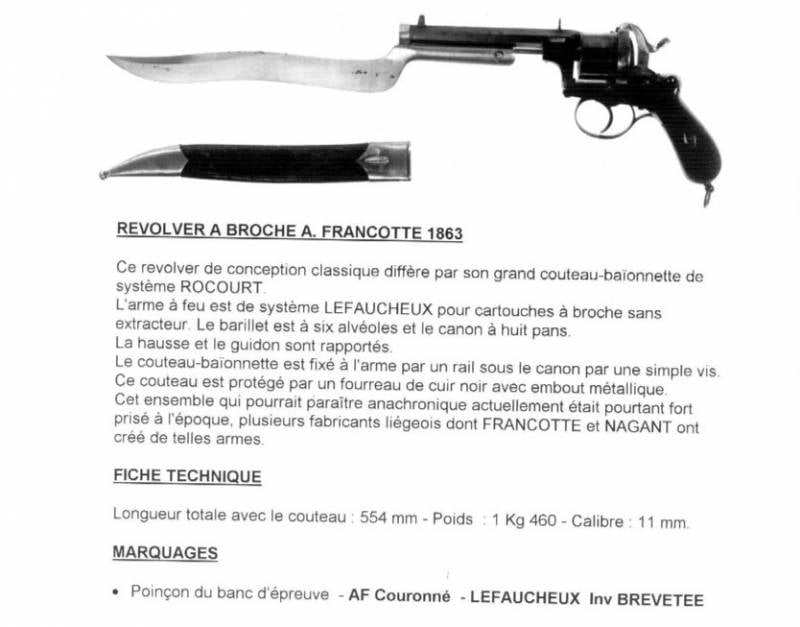 Well, when the era of classic revolvers with one barrel and a drum came, bayonets appeared on them. For example, an advertisement for Francott’s revolver with a bayonet is just absolutely frightening! (photo by Alain Daubresse) 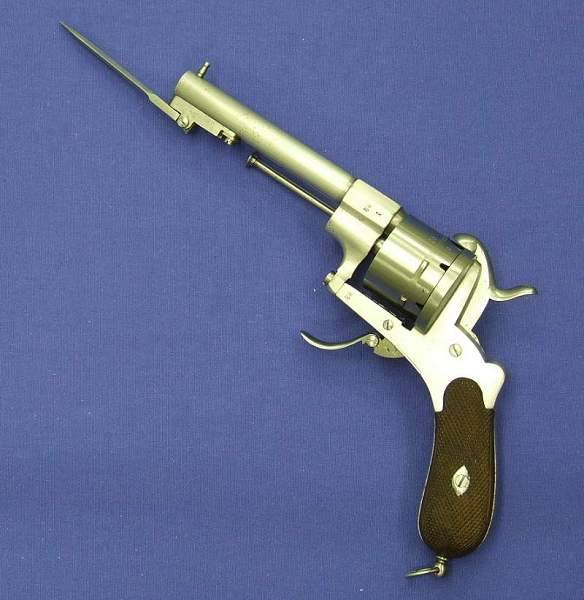 Moreover, bayonets on short-barreled firearms were installed not only on civilian models, but also on service ones. So, for example, the revolvers of the Nagant M.1884 caliber 7.5 mm, which entered service with the Luxembourg gendarmerie, were equipped with removable bayonets! 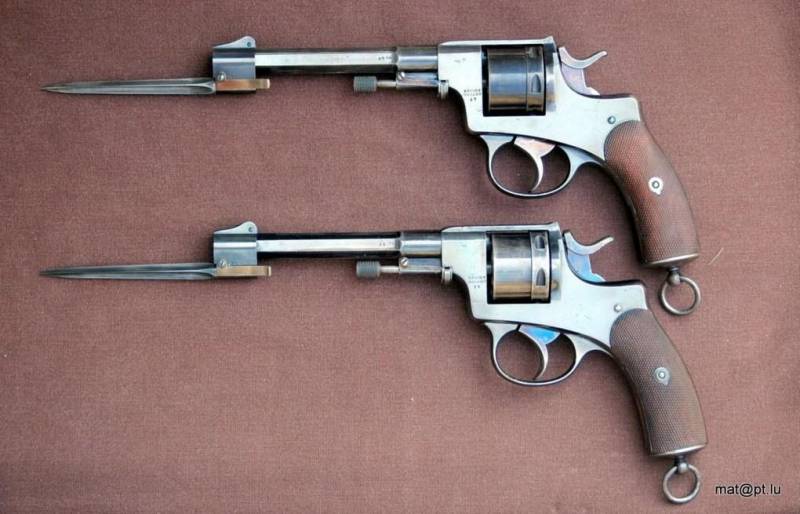 During the First World War, there was a need for portable weapons for fighting in the trenches. Rifles and even carbines were not suitable for this. The soldiers went on the attack, gaining grenades, and with sharpened sapper blades, others armed with axes or homemade clubs, seated with nails. The Pritchard bayonet, mounted on a .455 Webley Mark VI revolver with a standard 6-inch barrel, should have solved this problem. 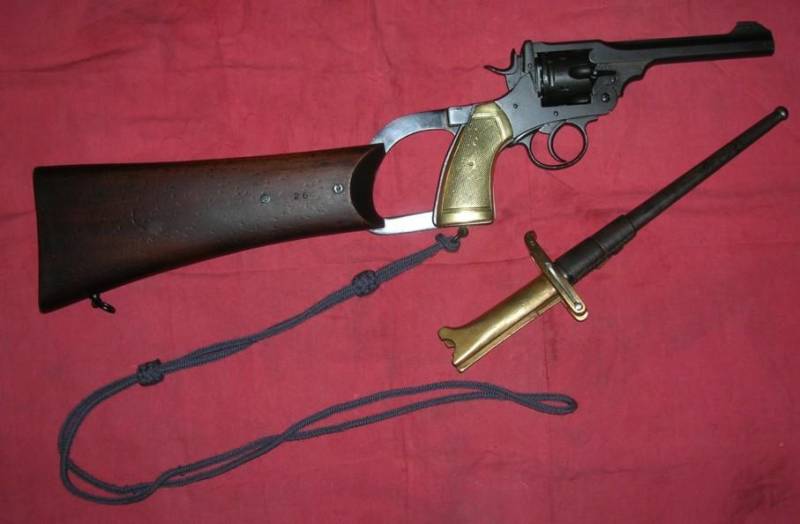 The bayonet had a special brass grip, to which the front of the bayonets of the French Gras M.1874 rifle with a “T” cross-section, which were very accessible during the First World War, was attached to it.

The bayonet device was such that it did not interfere with aiming, while the end of the handle had a special notch for the barrel hinge on the revolver frame. Thanks to this, the revolver could be freely reloaded without removing the bayonet.

A locking latch was provided on the crosspiece, which was located directly behind the front sight mount and held the bayonet on the weapon. In addition, this revolver, along with a bayonet, also relied on a butt, which, in fact, turned it into a light six-shot large-caliber carbine, very rapid-firing, and besides, with a bayonet!