The design of any amphibian is a search for a reasonable compromise between seaworthiness and land. In the case of the Thrush, the emphasis is clearly on the ability to walk quickly and safely on the water surface. Baltic Machine-Building Company has been developing an amphibian since 2014 completely on its own initiative. The first launch of the running prototype took place in November 2018. Despite the fact that the conditions in the assembly shops are not much better than the garage ones, the amphibian is distinguished by complex and non-standard engineering ideas. First of all, it is a four-wheel drive coupled with wheels retractable inside the boat. For such a technical solution, the developers redesigned the axles, the transfer case and the complex kinematics of the retractable chassis – a total of 12 patents were filed. There are two reasons for the unusual location of the spare wheel on the bow. Firstly, it is an excellent fender that allows the Drozd to moor quite hard. And secondly, there was simply no place in the stern of the wheel due to the located cooling radiators of the power plant. And the heavy spare wheel on the bow has a beneficial effect on the distribution of mass in the boat. Mooring cleats on the hull, in addition to their main purpose, can be used to attach a parachute landing system. The developers say directly that the vehicle can be useful for the Airborne Forces and the Marine Corps. Among potential users, EMERCOM employees are also considered: “Drozd” has a powerful water jet, which, if necessary, can be used as a pump to extinguish fires from water. 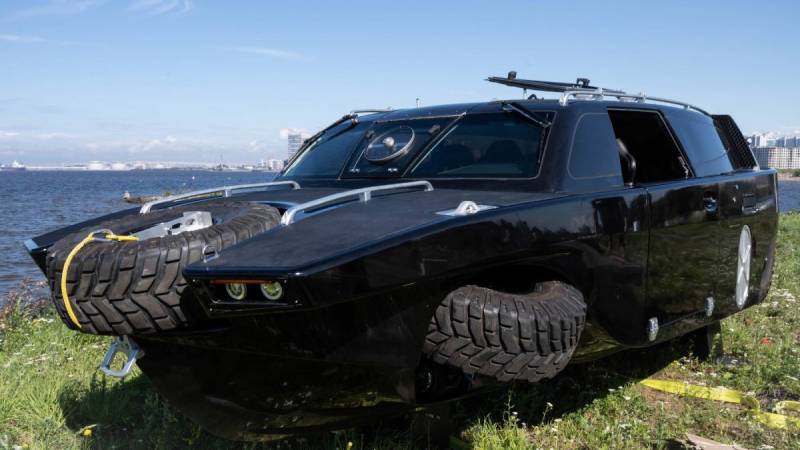 “Thrush” in the seaworthy position of the chassis. Source: mag.auto.ru

The 260-horsepower Steyr diesel engine is positioned for greater stability in the center of the boat between the driver-helmsman and the front passenger. According to the authors, during the development of the design, they tried five engines (domestic and foreign), but it was Steyr that turned out to be the lightest and most compact. The chosen Steyr, in addition to its merits, has the potential to accelerate power up to 300 l / s. Cruising range for fuel on land is 800 km, on water – 300 km. Due to the fact that the engine is forced to work on water constantly at high speeds (the specifics of seaworthy operation), the engineers had to develop a special cooling system. The radiators are built into the rear hinged doors and provide a heat-loaded diesel engine with much more efficient cooling than in the civilian land version. The power plant provided the amphibians with remarkable seaworthiness: the boat in planing mode will accelerate on water to 70 km / h, while successfully withstanding a 3-point storm. With greater excitement, the speed of travel on water bodies is expected to decrease. On land, “Drozd” develops a maximum of 100 km / h, while being able to overcome serious off-road conditions. The original amphibian is equipped with a three-band automatic gearbox borrowed from heavy American SUVs. According to the designer Sergei Tereshenkov, during the tests the checkpoint had to be adapted for seaworthy needs. At certain moments of acceleration, the “Drozd” raised its nose, which the gearbox sensors perceived as a prolonged rise (specificity of land use) and, of course, lowered the gear. As a result, the rate of acceleration of the boat decreased. The congenital ailment had to be treated by reprogramming the checkpoint.

“Drozd” is capable of throwing itself ashore like a whale at a speed of 20-30 km / h in planing mode, and only then get on its wheels. The lightweight and durable carbon frame, coupled with the composite body, should withstand this kind of stress. Such tricks are performed by the only one in the world. The ground clearance at the lowest point of the keel is 360 mm, which provides good geometric flotation. It is interesting how Tereshenkov, in one of the introductory videos, describes the design work on the project. According to him, no aesthetic delights were envisaged during the construction of the prototype: in the 3D editor, they simply “fitted” the cabin for 10 seats with a composite body, and that’s it. With Drozd, the functionality of forms really comes first. The body on the first copy is fiberglass, which somewhat increases the total weight. In the future, the designers intend to switch to a completely carbon body. There is no information on how this will increase the cost of the amphibian. With a curb weight of 2000 kilograms, the Drozd is capable of taking on board one and a half tons of cargo. It is impossible to sink the amphibian without destruction: even with the doors open, the boat will maintain positive buoyancy. The center of gravity of the boat is located in such a way that when the overturned “Drozd” returns to its original position. Like any seagoing vessel, the amphibian is equipped with an anchor (located in the spare wheel) with a winch, which simultaneously serves to self-retrieve a stuck vehicle on land.

Movement on the water of the amphibious is provided by a water jet with a controlled thrust vector or a rotary nozzle. This allows the boat to turn around on the water literally around its axis.

The main feature of the amphibian from the “Baltic Machine-Building Company” is the ability to get out of the water onto an unsuitable shore. This is why the Drozda has relatively large 40-inch wheels with developed lugs, an all-wheel drive transmission and the ability to change the tire pressure. By the way, the system of centralized regulation of pressure in the wheels appeared for the first time on waterfowl vehicles of the US Army – it was easier to get out of the water onto a swampy shore. And after the war, the system was launched into a wide series on the domestic ZIL-157 all-terrain vehicle. The truck on flat wheels significantly increased its cross-country ability on soft soils. In addition to all the aforementioned offroad systems, the Drozd is equipped with all differential locks and, naturally, an independent suspension. In the case of using a dependent suspension, folding the wheels into the body would be impossible to achieve. 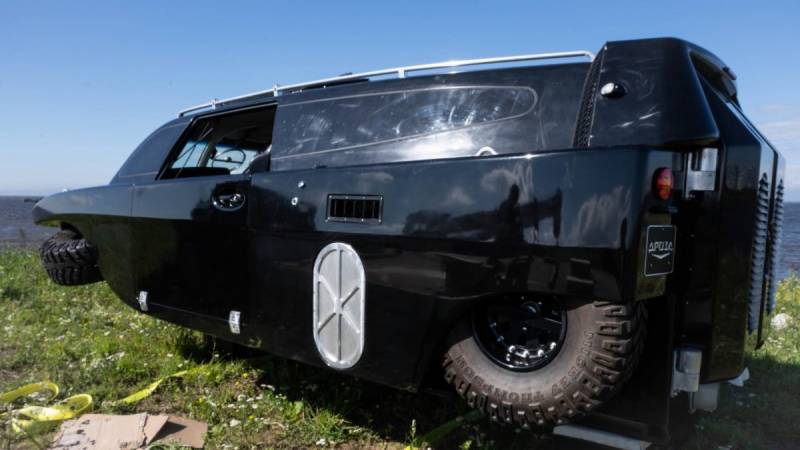 “Thrush” in the seaworthy position of the chassis. Source: mag.auto.ru

The off-road amphibian managed to impress overseas journalists, who dubbed it the James Bond car. At the same time, American observers expressed doubts about the military prospects of the Drozd. And it’s hard to disagree with them. Now for the Russian army, the appearance of such an amphibious vehicle is clearly not among the top priorities. In recent decades, the military did not need it at all. Since the times of the Soviet Union, projects of floating cars from VAZ and UAZ have survived, but they have not received proper development. Even earlier, work was underway to ensure the positive buoyancy of the Ural trucks, however, this was not in demand in the army. Instead, overcoming water obstacles was entrusted to pontoon parks of engineering troops and specialized transporters. The very concept of floating machines is, by and large, incomplete. On the one hand, the boat from the car is not the most perfect, but on the other hand, the car is quite mediocre. Much the same is the case with the widely advertised flying cars. Yes, single copies of such an exotic are now being built, but no one has taken winged cars seriously for a long time. Too much is imposed on the operator of such a universal gadget: both skills in aircraft control are required, and the level of risk during the flight is not comparable to movement on land. 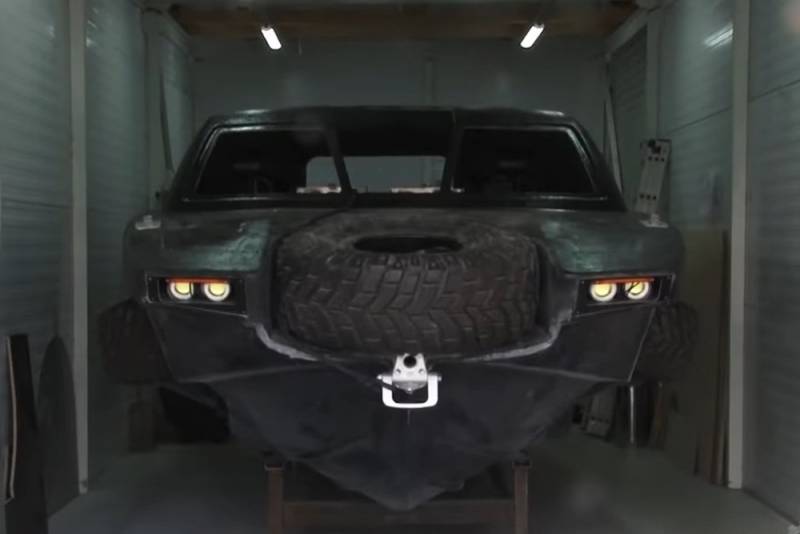 For the military, “Drozd” fits very conditionally. In reality, when the enemy is equipped to the teeth with small arms, releasing ten soldiers in a fiberglass land boat into battle is like murder. For the most primitive booking, the amphibian clearly does not have enough carrying capacity, and the redistribution of masses in this case will negatively affect the stability of the vessel. “Thrush” can move very quickly through the water – this is its undoubted advantage. But when operating on land, the machine cannot provide the military with even the simplest protection against shrapnel, not to mention a possible explosion. And here domestic armored personnel carriers will give a hundred points ahead of “Drozd”, albeit at the expense of low speed on the water.

Finally, the use of a large number of foreign components raises questions. And if you can somehow figure it out with the Styer diesel engine (although Tereshenkov himself could not) and replace it with a Russian analogue, then with an automatic gearbox everything is much more complicated. In Russia, unfortunately, there is not even a “machine gun” of this class in development yet. Unless, of course, borrowed from the representative Aurus: the unit was built for it in the Moscow company KATE.

In any case, the precedent when the owner of a small machine-building company producing pipe benders and trailers builds an amphibian with his own money, which has no analogues in the world, is worthy of respect. We can only hope that the development will find its client.