The Energia-Buran system with an orbital aircraft developed by the NPO Molniya. Photo “Roscosmos”

In our country, work has been resumed on aerospace systems with reusable orbital aircraft. A new project of this kind is being developed at the NGO “Molniya” and, as it became known, in recent months it has made significant progress. Development work is planned to be completed in the coming years, and a first test flight is possible within the next five years.

The task is given

In recent decades, domestic enterprises have offered various options for aerospace systems (AKS), but not a single such project has received serious development and has not been brought even to the point of testing. This was due to the lack of financial, technological and organizational capabilities. By now, the situation has changed and allows us to return to promising topics.

After lengthy discussions at different levels, it was decided to resume the work. In May 2020, Dmitry Rogozin, the general director of Roscosmos, said that a new reusable aircraft-type spacecraft could be created in the future. Such systems have certain advantages and are of interest for the rocket and space industry.

Already in August, the management of Roskosmos ordered the start of work. According to recent reports, by that time the industry had its first ideas and suggestions. So, within the framework of a closed exposition at the Army-2020 forum, a model of a promising AKS with a spaceplane developed by NPO Molniya was shown.

On March 12, the press service of the NGO Molniya published a long interview with the general director of the enterprise Olga Sokolova. It raised questions about the activities of “Lightning” in recent years, especially the current state of affairs and plans for the future. Along with other topics, the creation of an AKS with a spaceplane was also considered. 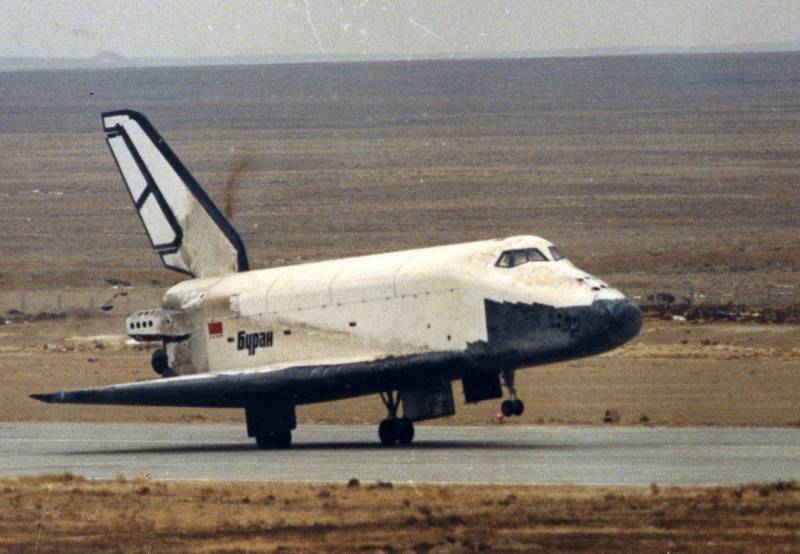 According to O. Sokolova, the development of a new civilian spaceplane continues and has made significant progress over the past year. Previously, the company had various developments on this topic, but there was no order and a clear technical assignment. Now they have been received, which made it possible to begin a full-scale development of the project.

The new spaceplane project had a positive impact on the Molniya design bureau, which deals with aerospace issues. Specialists are actively involved in the work; there is an increase in KB in the professional sense, incl. due to new employees. In addition, there are plans to increase jobs. Over the next two years, the team will grow to 700-800 people, which will increase its overall potential.

In the interview, for the first time, a full-size mock-up of an orbiting aircraft was officially mentioned. He was present in the closed exposition of “Army-2020” and attracted the attention of its visitors. The demonstration of the model became a landmark event: NPO Molniya demonstrated its return to its core business in the form of the development of reusable spacecraft.

O. Sokolova is very optimistic about her plans for the future. She believes that the process of creating a new AKC will be completed and brought to flight within the next five years. In recent years, NGO “Molniya” was able to cope with the accumulated problems and restored its potential, which allows it to draw up new bold plans.

The interview with the director general of the NGO Molniya did not immediately receive the attention it deserved. Publications on the topic of the promising AKC appeared in the domestic media only a few days ago. At the same time, we are already talking about getting new details from sources in the rocket and space industry. 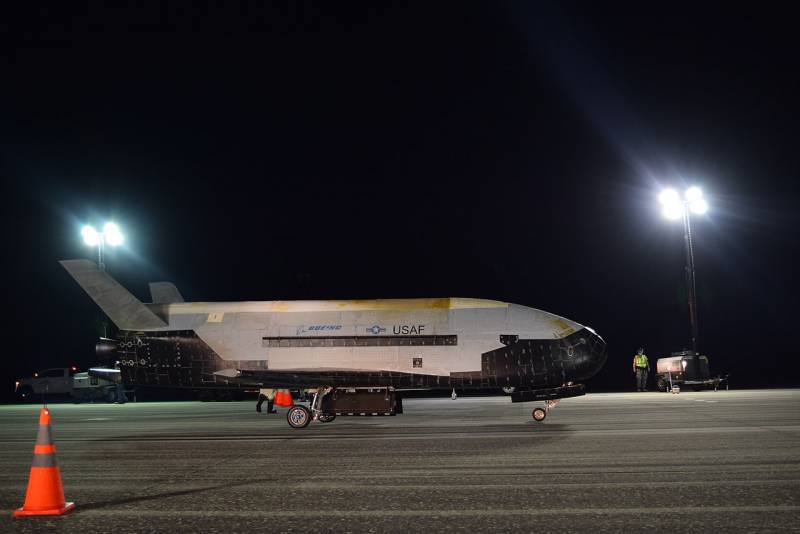 American spaceplane X-37B after another flight. Photo by US Air Force

The first technical details were published by RIA Novosti on March 25. According to their source, the project from “Lightning” is being developed on an initiative basis. AKC is created for commercial use in the interests of various customers. The orbital plane is planned to be unmanned; it will have to send into orbit and return to Earth only cargo.

The new Russian spaceplane will be similar in size to the American Boeing X-37B. The latter is less than 9 m long and has a wingspan of approx. 4.5 m and weighs no more than 5 tons. The limited dimensions and weight reduce the requirements for the launch vehicle. In this capacity, it is planned to use one of the Soyuz missiles in the promising AKS.

It should be noted that information about the small dimensions of the spaceplane is indirectly confirmed by official reports. The full-size mock-up of the orbital aircraft was demonstrated in the closed pavilion of Army-2020. This means that the product is really inferior in size to the Buran or the American Space Shuttle.

The announced information about the development of a new domestic AKS with a reusable orbital aircraft is of great interest. First of all, attention is drawn to the very fact of the appearance of such a project, which has already been brought to design work and demonstration at the exhibition. Russian enterprises have not offered new projects to AKC for a long time, and news from Molnia evokes a natural reaction.

An important feature of the project is the fact that its development is carried out by the NGO “Molniya”, which was originally created to solve such problems. It was this enterprise that in the past developed the most successful domestic AKS with the Buran orbital aircraft. Now this organization gets the opportunity to use the accumulated experience and new developments in a promising project. The positive effect of such work – for Molniya and for the industry as a whole – is obvious. 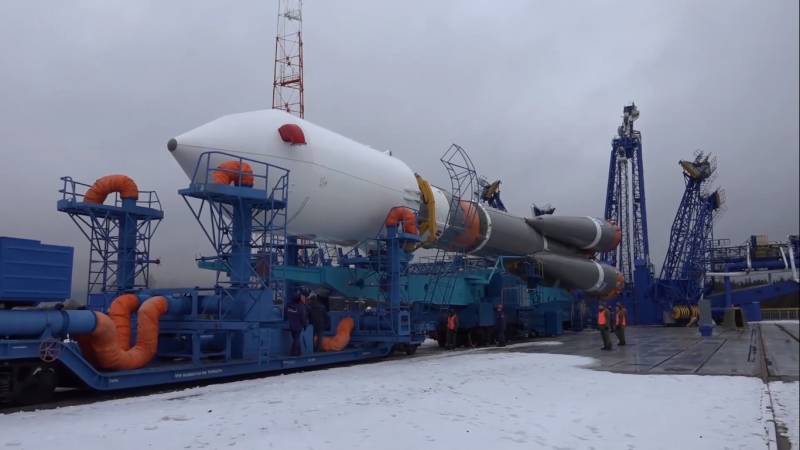 Soyuz-2.1b launch vehicle in large-size load configuration. Probably, the same fairing will be used with the spaceplane from “Lightning”. Photo of the Ministry of Defense of the Russian Federation

In terms of size and characteristics, the new Russian spaceplane will be similar to the American model and to the Chinese ship, which is supposed to have been created with an eye on the X-37B. American experience shows that the technique of such a look shows sufficient characteristics and corresponds to a wide range of practical tasks. Using a proven concept provides known benefits and saves time.

Time, money and effort can be saved by reducing project complexity and using available technologies and components. There are also some benefits to not having a person on board. It is obvious that the development of a promising spaceplane and AKS as a whole will be much easier than the process of creating the Energia-Buran complex. This makes it possible to count on the solution of the assigned tasks within the specified time frame – and on the first flight within five years.

The promising AKS has a non-military purpose and is intended for commercial operation. Thus, after the completion of the tests, the Russian spaceplane will be able to earn money on the withdrawal and descent of various loads. In this respect, it will compare favorably with the American X-37B, which is used by the military and, accordingly, does not generate income. However, in foreign countries, other types of equipment are being created that can in the future compete with the Russian system.

In general, the latest news from the rocket and space sector allows us to make optimistic assessments. After a long break, NPO Molniya has restored its competence in the field of aerospace systems and is already developing a new project of this kind. The general appearance of the spaceplane has been formed; it is implemented as a mock-up and shown to a limited audience, consisting of specialists and responsible persons.

The work continues, and it is planned to spend only a few years on them. The first launch of the spaceplane into orbit should take place no later than 2025-26. Then, it may take several years to develop the complex and prepare for full-fledged operation. As a result, at the end of the decade, for the first time, the launch and recovery of loads using a reusable aircraft-type spacecraft will appear on the list of Roscosmos services.

However, while the project is in its early stages, and this leads to certain risks. In general, the situation is conducive to optimism, but so far one cannot exclude certain difficulties that could slow down the project or lead to its closure. How realistic are the current estimates, and whether it will be possible to send the spaceplane into orbit in five years, it will become clear in the foreseeable future. A promising project is no longer hidden from the public, and new messages about it may appear at any time.