Experienced chassis at the exhibition

One of the most interesting exhibits at the Army-2020 forum was the SKKSH-586 special body wheeled chassis developed by the Mytishchi Machine-Building Plant. This sample was developed as a base for various air defense systems and other equipment and should show sufficiently high tactical and technical characteristics. In addition, it has a number of important features, thanks to which it has significant prospects.

From initiative to order

It is reported that MMZ (part of the Kalashnikov concern) began developing the future SKKSH-586 on its own initiative. In the future, the Ministry of Defense became interested in this project, which led to the appearance of an official technical task. The final version of the product will fully meet the requirements of the military.

SKKSH-586 is a wheeled floating platform for installing one or another equipment. The chassis is proposed to be used for the construction of various anti-aircraft missile systems of the military air defense, for which high mobility and maneuverability are provided, as well as protection against major threats. The target equipment is proposed to be placed in the designated places inside the body and on the roof.

At Army-2020, the development plant presented a prototype of a promising chassis. The car was demonstrated independently, without any target equipment. At the same time, the seat on the roof was covered with a camouflage net. In addition, a commercial was published showing a chassis with a combat module of the Tor air defense missile system.

According to the announced plans, in the 1st quarter of 2021, the SKKSH-586 prototype will be released for preliminary tests. Also next year it is planned to start testing the chassis with a “payload”. As the latter, the combat module and other equipment of the short-range air defense system “Tor” will be used. According to current estimates, testing will take about two years. Already at the beginning of 2023, a promising car can go into production.

The SKKSH-586 project is based on several important ideas that provide an effective solution to the assigned tasks. The result of this was the emergence of a protected vehicle with an 8×8 wheel arrangement, high carrying capacity and high running characteristics. 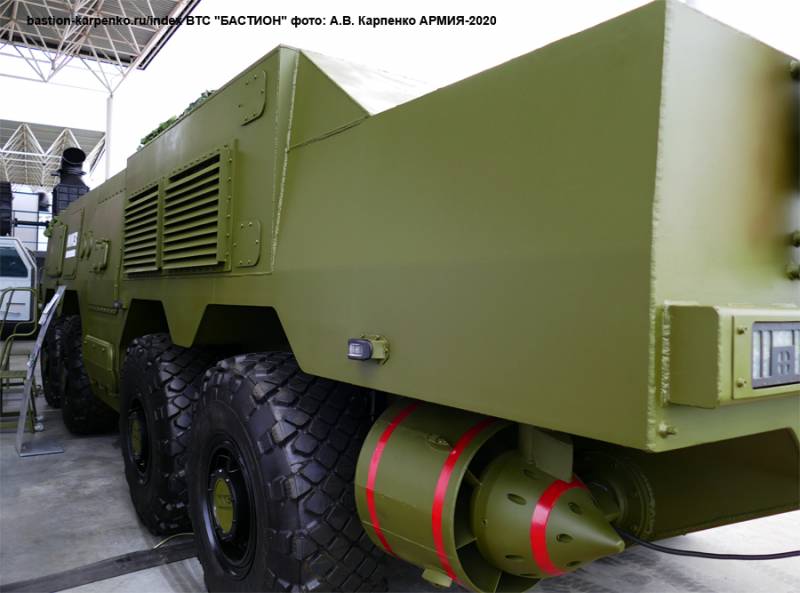 View of the stern and port side, the water cannon is visible

As the name of the project suggests, the vehicle is based on the original structural body. The body is made of aluminum alloy and has a rear-engine layout. The front and center compartments are dedicated to the control compartment and target equipment. The hull sheets provide protection of class 4 according to the domestic standard – from 5.45-mm automatic bullets. The department receives armored glass with the same level of protection. The body is sealed and allows you to swim.

The chassis is equipped with a 650 hp multi-fuel engine. produced by the Tutaevsky Motor Plant. The four-axle chassis gets four-wheel drive. A controlled hydropneumatic suspension with the ability to change the ground clearance is used. Normal ground clearance is 400 mm, the range of variation is from 220 to 520 mm. In the stern of the hull there are two water-jet propellers.

The chassis power systems are designed with ancillary equipment installed and its potential consumption in mind. To simplify operation, there is an information and control system that monitors the operation of the units and provides the crew with the necessary data.

The length of the chassis reaches 11.2 m, the width is 3.4 m. The own height of the chassis without a combat module is 2.45 m. The total weight, depending on the configuration, will not exceed 43.2 tons. The carrying capacity is more than 17 tons. with such a mass, an armored vehicle can reach speeds of up to 80 km / h, a cruising range of 800 km. Overcoming of various obstacles and water barriers is provided. Self-recovery winch is provided.

The presented special chassis is of great interest from a technical and operational point of view, as well as in the context of the further development of military air defense. The stated features and characteristics suggest that the SKKSH-586 has great prospects and can find its place in the Russian army or in foreign armed forces. 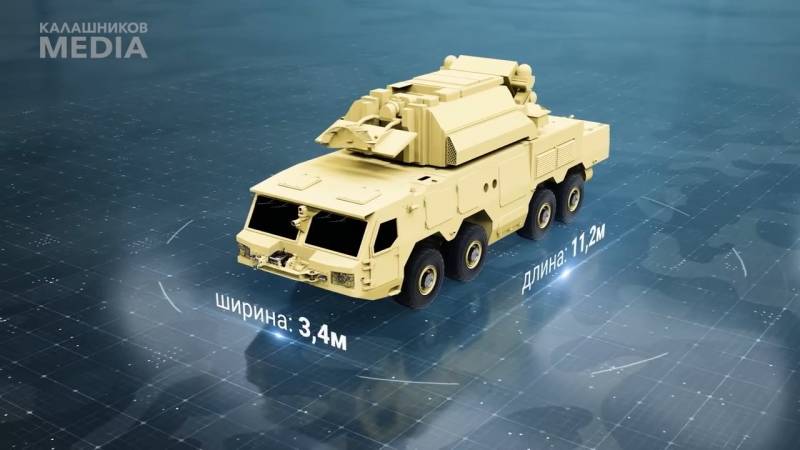 The proposed appearance of SKKSH-586 with the “Tor” combat module

First of all, it should be noted that chassis of this class with characteristics of this level are not yet produced in our country. The new development of MMZ turns out to be the first modern example of this kind. The emergence of the SKKSH-586 project opens up new prospects and reduces risks.

Currently, the domestic industry cannot meet all the needs of the army for special chassis, which is why it is necessary to purchase foreign equipment. The emergence of a new development from MMZ partially solves this problem and allows in the future to do without some imported samples, as well as to insure the army against known risks.

SKKSH-586 can be a very successful platform for the construction of various types of equipment. Carrying capacity of at least 17 tons allows to carry combat modules and other equipment of all existing short-range and medium-range air defense systems, such as “Tor”, “Pantsir” or “Buk”. In addition, in terms of target load, the new chassis surpasses the main domestic and foreign samples.

With all this, the SKKSH-586 chassis is distinguished by good mobility. It can be thrown over highways and used on rough terrain with water obstacles. Not all modern models of military air defense have such capabilities. However, due to its large size and weight, the combat vehicle can only be transported by air by An-124 aircraft.

Thus, the new body chassis SKKSH-586 from MMZ has a great future and can take an important place in the structure of weapons and equipment of the ground forces. With its help, it is possible to create new highly mobile air defense systems based on serial components. For example, advertising materials for the project demonstrate a modification of the Tor combat vehicle on a new chassis. It is reported about the elaboration of the installation of the Buk air defense missile systems. 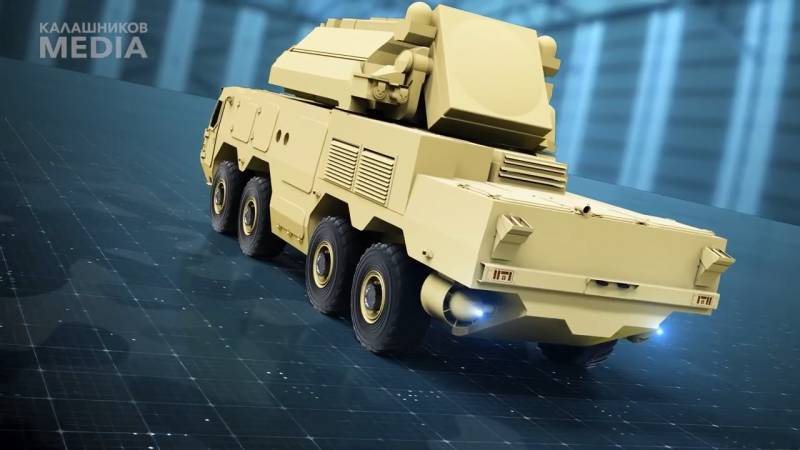 SKKSH-586 has a solid reserve of characteristics, which will be useful in the development of promising samples. The issue of creating a new MLRS is being worked out. Also, on a similar chassis, you can create radar and radio technical stations for various purposes, command posts, etc. In fact, it will be useful in all areas where a significant payload is required with high cross-country ability and anti-bullet protection.

However, some application options remain questionable. So, it is unclear whether it is possible to fit into the existing body of the OTRK or another “heavy” sample with specific layout requirements.

However, the use of a new special chassis in real projects is still a matter of the future. To date, MMZ has built only a prototype, which has not yet been put into testing. These activities will start only next year and will continue until 2022-23.

Not earlier than 2023, the development plant is able to organize mass production in the interests of the domestic Ministry of Defense. Probably, by this time, together with subcontractors, he will also create projects of real air defense systems on a new platform, and the first serial chassis will immediately receive the necessary equipment. It is not known which complex will be the first to go into production. Perhaps the army has not yet decided on such plans.

In general, the SKKSH-568 project is about a promising, interesting and important model for the domestic industry and the army. The success of this project will provide new opportunities of all kinds – from the development of advanced prototypes with improved characteristics to the reduction of dependence on imports. Unfortunately, negative scenarios cannot be ruled out. But even in this case, useful experience will be obtained.