The ceremony of acceptance into the Navy of the lead submarine of the project, USS Virginia (SSN-774), October 23, 2004. Photo by US Navy

In October 2004, the US Navy accepted the USS Virginia (SSN-774) multipurpose nuclear submarine, the lead ship of the project of the same name. The construction of such nuclear submarines continues to this day, and the fleet received almost two dozen pennants. Current plans call for continued construction of these boats over the next several decades. Deeply modernized “Virginias” will be able to serve almost until the end of the century.

Ships in the ranks

The first order for the construction of new Virginia-class nuclear submarines appeared in September 1998. It provided for the construction of the lead ship of the same name and three serial boats. This was the first version of the project, known as Block I. The laying of the first submarine took place about a year later. In August 2003, the submarine USS Virginia (SSN-774) was launched, and in October 2004 it was handed over to the customer.

In August 2003, the US Navy ordered a second batch of six nuclear submarines, the so-called. Block II. This version of the project had some differences based on the experience of construction and testing of its predecessors, as well as increasing the tactical, technical and operational characteristics. The laying of the nuclear submarine of the second series took place in 2007-11, they were handed over from 2008 to 2013.

Since 2012, Block III submarines have been built. The eighth hull of this modification was laid down in 2016.The first ship of the series was commissioned into the fleet in October 2014, and the latter began service in the spring of last year.

Literally a couple of weeks after that, the fleet was handed over to the USS Vermont (SSN-792) nuclear submarine. She was built under a contract dated April 2014, providing for the delivery of 10 ships of the new Block IV modification. At the moment, “Vermont” is the only representative of its version of the project, brought to operation. Within the framework of the entire Virginia project, this is the 19th and so far the last completed pennant.

At the moment, the main task of the American shipbuilding within the framework of the Virginia project is the continuation and completion of the construction of Block IV series submarines. The 2014 order is split between General Dynamics Electric Boat (Groton) and Newport News Shipbuilding of Huntington Ingalls Industries (Newport News). Six new boats, including the lead one, were commissioned to build GDEB, the rest will be supplied by NNS.

The execution of the order for Block IV started in 2017 with the laying of the USS Vermont (SSN-792) and USS Oregon (SSN-793) boats at the GDEB shipyard. NNS joined the work in May 2018, starting construction on USS Montana (SSN-794). In 2019 and 2020 four ships were laid down at two enterprises. The last ceremony of this kind took place on December 11, 2020 and launched the construction of the nuclear submarine USS Massachusetts (SSN-798), the eighth ship in the series. Two more submarines have not yet been laid down.

The Navy planned to take on one new Block IV series submarine annually, starting in 2020. The last ships will be handed over to the Navy in 2027. At the same time, there has been some time shift due to the pandemic and antiviral production restrictions. Time will tell whether it will be possible to cope with this problem and do without major changes in the schedule. 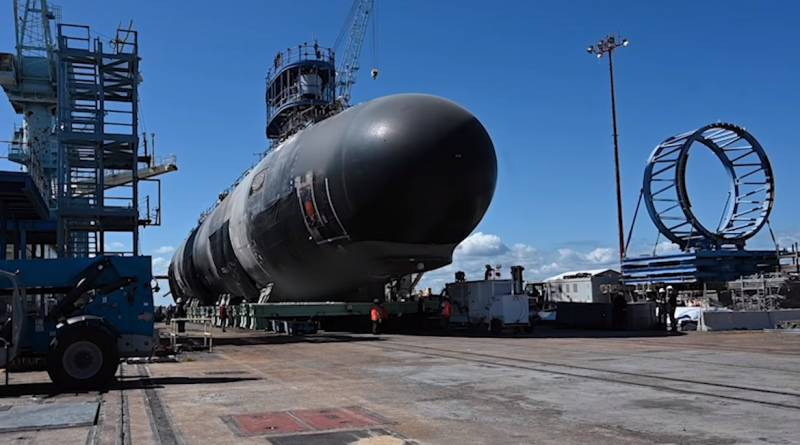 The withdrawal from the boathouse of the submarine USS Montana (SSN-794) – the last one completed, October 2020

Under the terms of the contract, in 2019-23 FY. The Pentagon must allocate $ 22.2 billion for the construction of nine ships of the new series. One of these submarines will differ from others in terms of equipment and armament. In addition, there is an option for a tenth submarine worth $ 1.9 billion. Its design will repeat the eight previous Block V ships.

At the moment, the execution of the order for Block V is in preparation for the construction of the first two submarines at the GDEB enterprise. They were named USS Oklahoma (SSN-802) and USS Arizona (SSN-803). The laying has not yet been carried out, but is expected soon. The next seven or eight nuclear submarines will be mortgaged over the next years. Under the terms of the contract, the finished submarines of the new series will be handed over to the customer in 2025-29.

Plans are already being worked out to further upgrade the submarine forces. As in the recent past, it will be carried out through the gradual modernization of the existing project. Two new series of submarines, Block VI and Block VII, are planned for the short and medium prospects. In the future, the appearance of a deeply modernized project Improved Virginia is expected. 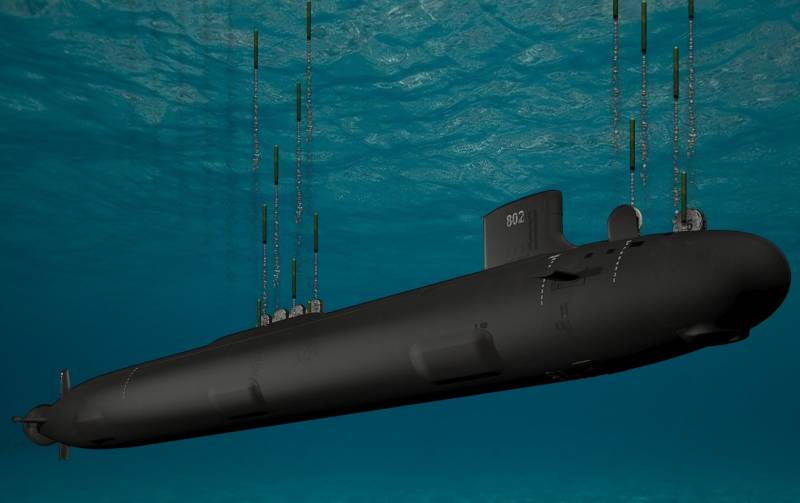 According to various sources, the construction of new series of submarines will be ordered and financed no earlier than 2025. Contracts may provide for the delivery of at least five submarines of each modification. Their construction will take more than 5-7 years. Accordingly, the last Virginia Block VIIs will enter the combat composition of the fleet only in the first half of the thirties.

In the early tenths, a different schedule was proposed. It provided for the early creation of the Improved Virginia project and the order for the head submarine of this type in 2025 with the completion of the construction of the first series no later than 2035. In the future, “Improved” Virginia “was postponed to a later date. Now the laying of the first such nuclear submarine is planned only for the thirties.

New series and projects include important technical updates. Thus, eight ordered Block V submarines (as well as an option) will receive an additional missile compartment. The new 21-meter section of the hull will house four Virginia Payload Modules (VPMs). Each such module accommodates seven Tomahawk missiles or another target load. In addition, they will retain two bow vertical launchers with six missiles each, provided for by previous projects.

Due to the new compartment with VPM, the missile ammunition load of the submarine is increased from 12 to 40 units. Tomahawk products are again considered as the main missile armament. In addition, in the future, a promising hypersonic missile may be included in the Block V nuclear submarine ammunition. Development of such a product will begin in FY2021. 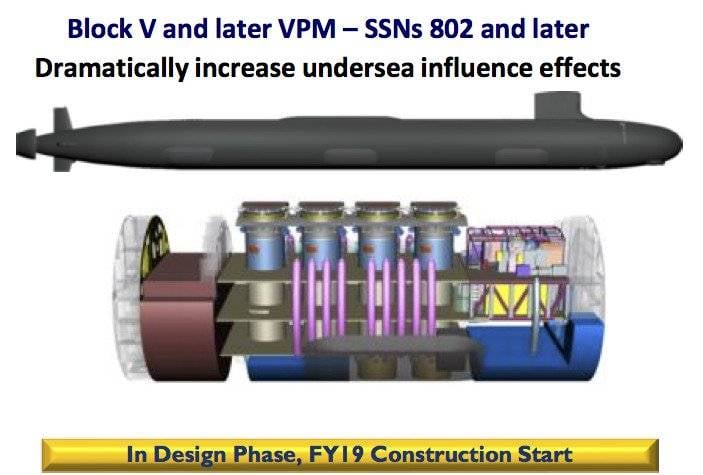 Block V design and layout of the compartment with VPM modules. Graphics US Navy

The design of such a weapon is known under the designation Conventional Prompt Strike (CPS). The missile is planned to be created on the basis of the Common Hypersonic Glide Body (C-HGB) hypersonic warhead and the missile unit. The performance characteristics of such a product are unknown. It is planned to be put into service and deployed to the nuclear submarine in 2028.

The technical appearance of the promising submarine Improved Virginia has not yet been determined. Earlier it was reported about the possibility of introducing new missile and torpedo weapons, the use of unmanned underwater vehicles, etc. The nuclear power plant, general ship and information and control systems will undergo significant revision. Probably, the result of this project will actually be a new submarine, only limitedly unified with the existing one.

To date, the American shipbuilding industry, represented by two shipyards, has built and delivered to the naval forces 19 Virginia-class multipurpose nuclear submarines of four series. Two more ships are now at the stage of completion and sea trials; they will be accepted no later than 2021-22. The construction of the Block III series has been successfully completed.

Five hulls are on the slipways – these are the future ships of the Block IV series. Two more orders remain at the stage of preparation for construction, in the future they will open a new series of Block V. Then the shipbuilders will start building nine (or ten) new ships – two of the Block IV series and seven (eight) nuclear submarines of the next modification. 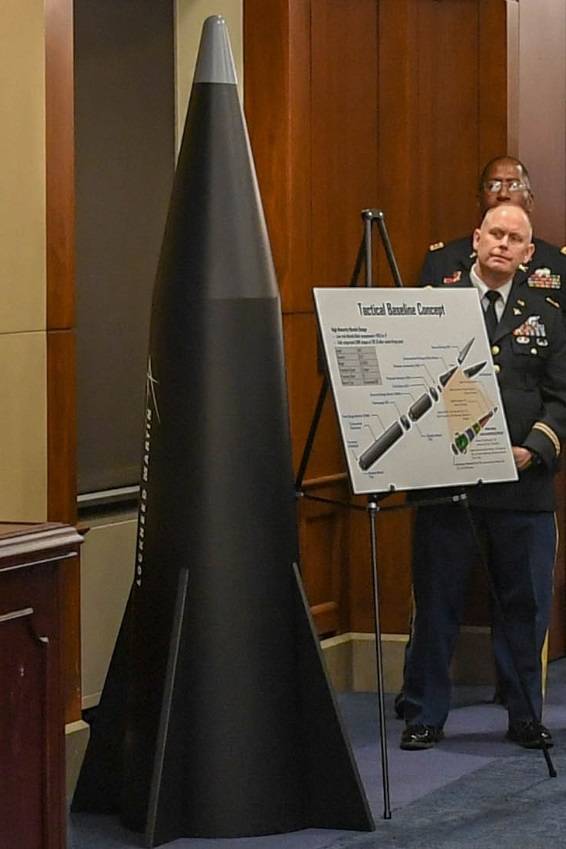 Prospective layout of the C-HGB warhead for the CPS missile. Photo Bmpd.livejournal.com

Thus, according to the results of the execution of all existing contracts, the US Navy will be able to receive almost 40 Virginia-class submarines. At the same time, new orders for the next series are expected. If the contracts for Block VI and Block VII boats in terms of their volumes correspond to the previous ones, then the Navy will receive another 18-20 new nuclear submarines by the mid-thirties. Due to this, the total number of “Virginias” can grow to 60 units.

The design life of the Virginia-type nuclear submarine is determined by the characteristics of the nuclear power plant and is 33 years. Thus, in 2035-36. the process of decommissioning the oldest submarines will begin. To make up for such “losses” the fleet will need to build new ships. Perhaps the new Improved Virginia will replace the decommissioned ships.

One way or another, the serial construction of Virginia-class multipurpose nuclear submarines has gained the necessary pace and regularly provides the US Navy with new ships. In the present period and in the foreseeable future, the number of such submarines will constantly grow, and then the industry will ensure the preservation of the required number of pennants in service. Apparently, “Virginias” will not only make the necessary contribution to the country’s defense, but also set a record for the duration of service.