Ground equipment operates on a battlefield saturated with all types of weapons. This significantly distinguishes it from combat operations on water, under water and in the air. The main difference is that on the ground, military equipment can operate with bullets, shells, missiles and mines of a huge range of calibers: from 5.45 mm to 203 mm. At the same time, the number of types of ammunition that can be used to attack aircraft, ships and submarines is an order of magnitude less. And the distance from which this or that weapon is used on planes, ships and submarines is much greater, which gives them time to make a decision and respond.

All of the above makes armor an integral part of ground vehicles. The only question is what the optimal level of booking should be: the ratio of the mass of the armor to the mass of the rest of the equipment and its distribution on the hull.

At the same time, weapons of destruction were developing (often at a faster pace). A serious challenge for the creators of armor protection was the emergence of cumulative warheads. A distinctive feature of cumulative warheads is that they can be installed in fairly compact and inexpensive weapons that can be placed on all types of carriers, starting with the usual infantryman.

The RPG-7 hand-held anti-tank grenade launcher and its analogues have become one of the most terrible threats to armored vehicles, especially in mountainous and wooded areas or battles in settlements

A definite breakthrough can be considered the appearance of composite armor, which includes, in addition to armor steels, fillers from various non-metallic materials: reinforced fabrics, fiberglass, porcelain, armored ceramics.

Another breakthrough can be considered the appearance of dynamic protection (DZ), the principle of which is based on the destruction of an attacking ammunition or a cumulative jet due to the detonation of a small explosive charge, the initiation of which is carried out by the action of the attacking ammunition itself. Dynamic protection has become widespread on domestic combat vehicles. 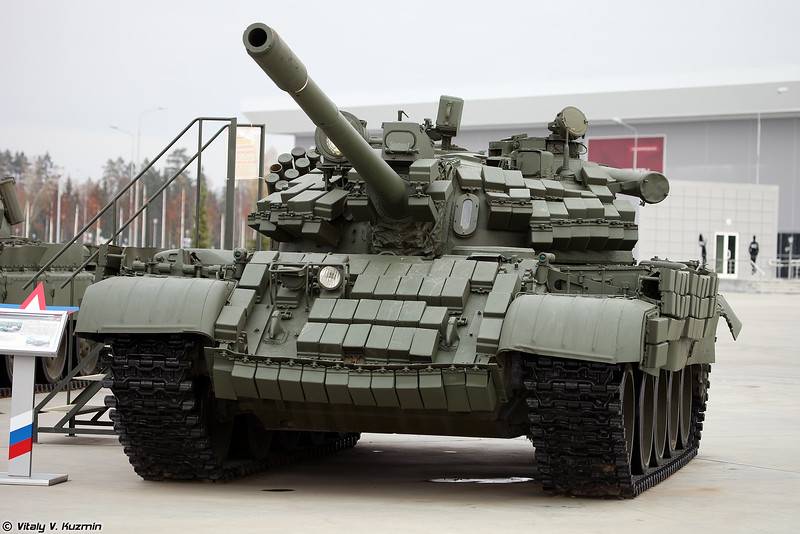 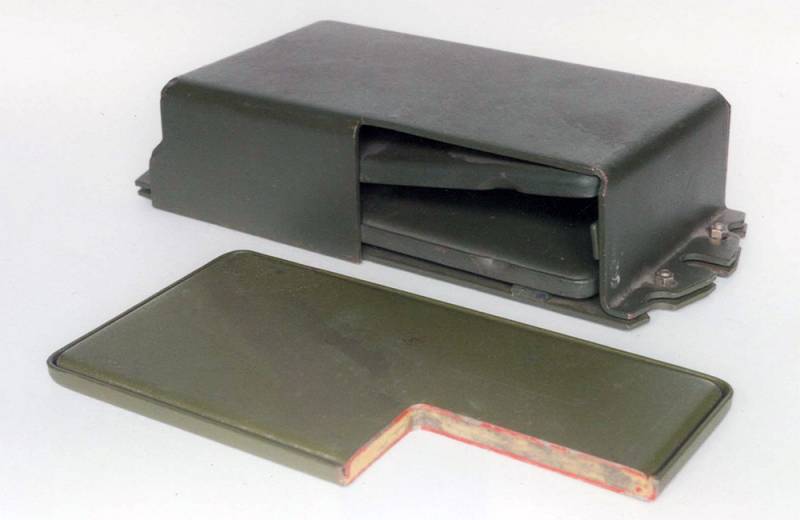 The emergence of DZ forced the developers of anti-tank weapons to increase the diameter of the cumulative funnel, to equip the products with one or two leading cumulative pre-charges designed to destroy ERA units. 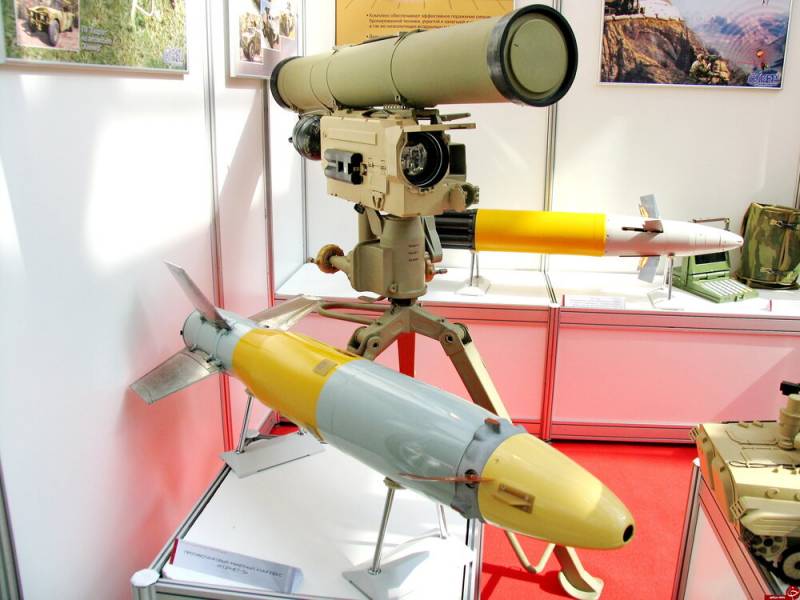 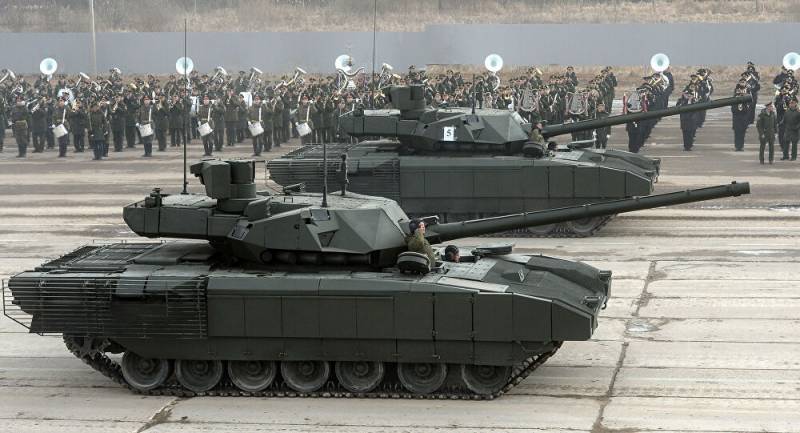 There is little information about DZ “Malachite”. Versions are being put forward that its design can be based on both relatively conservative and advanced technical solutions. In the first case, the design of the DZ “Malachite” is based on improved solutions implemented in the DZ “Relikt”: sequential shooting towards the attacking ammunition of the armor cover of the DZ module and the damper plate. This allows you to break the cumulative jet, bend or break the BOPS.

In the second version, DZ “Malakhit” can be implemented as part of the active protection complex (KAZ) “Afganit”, also installed on machines of the “Armata” family. In this case, the DZ becomes “intellectual armor”: the triggering of the DZ block is carried out in advance, even before the attacking ammunition hits, according to the radar station (radar) of the Afganit complex.

It is also possible to implement the DZ “Malachite” by the type of electrodynamic protection, a patent for which is held by the “Research Institute of Steel”. In this case, the detection of an approaching projectile or missile is carried out by built-in inductors based on the change in the magnetic field strength from the metal contained in the structure of the attacking ammunition. The advantage of this solution is the independence of the remote sensing from the KAZ “Afganit” radar, which can be damaged by enemy fire, as well as the possibility of destroying the attacking ammunition at a distance of about 200-400 mm from the hull, even before they hit the protected object. 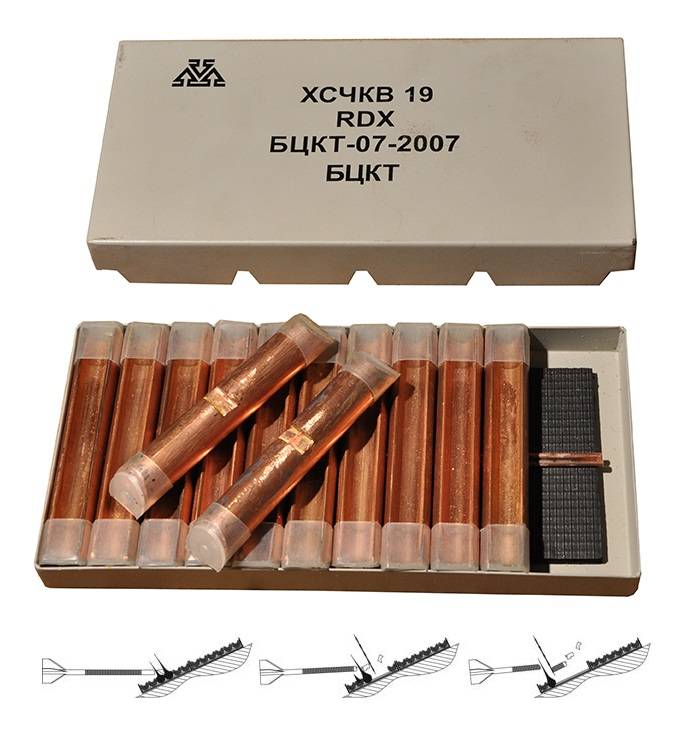 In DZ “Duplet” reactive armor modules are located in several layers, which significantly increases the likelihood of destroying the attacking ammunition. 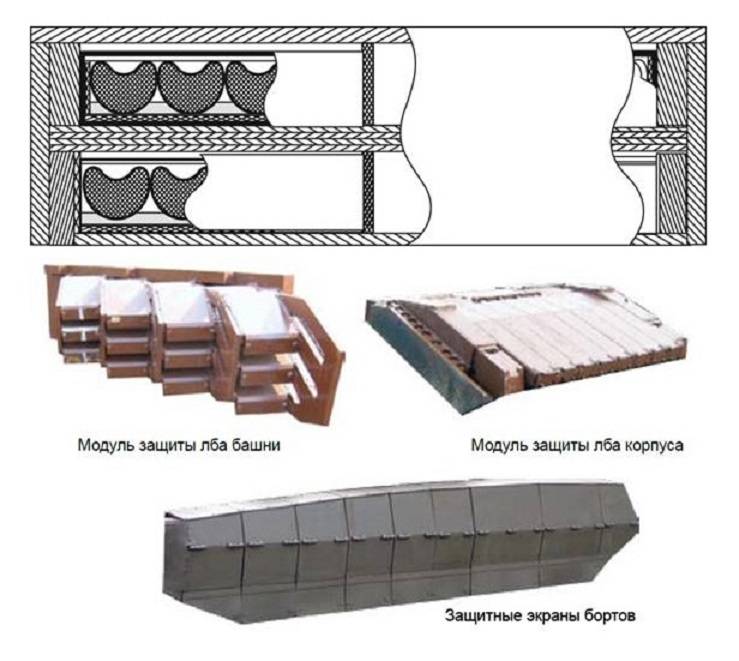 Like many other things, the history of dynamic protection based on the principle of extended shaped charges begins in the USSR. Nevertheless, after the collapse of the country, Russian and Ukrainian developers chose different development paths. Time will tell which solution will be more effective. Meanwhile, it is possible that the best option would be the use of combined solutions, in which different types of reactive armor would complement each other.

For promising models of armored vehicles, the creation of the so-called electric armor is being considered. One of the options is the ejection of a protective plate towards the attacking ammunition, as it can presumably be implemented in the Malachite DZ, only throwing should be carried out not by detonating a small-sized explosive charge, but by electrothermal action on the thrown plate due to the evaporation of a polyethylene block a powerful electric discharge, or the implementation of the expansion of protective plates using electromagnetic interaction.

The principle of operation of electromagnetic armor

A variant of the direct impact of a high-voltage discharge, with an energy of the order of 10-20 kJ, on the cumulative jet or the core of the BOPS is also being considered, which should lead to their destruction.

A serious advantage of “electric armor” is the minimum secondary impact on the carrier, due to which such protection can be used on light armored vehicles, as well as minimal impact on related objects, for example, infantry accompanying armored vehicles. The main problem in the implementation of this or that type of “electric armor” is the need to install a powerful source of electricity on armored vehicles, which is extremely difficult to implement on vehicles with a traditional power plant, but it is quite possible on promising platforms with electric propulsion.

Recently, the question of the permissible reduction in booking has been periodically raised, in connection with the increasing possibilities for camouflaging armored vehicles, as well as the introduction of highly efficient promising KAZ. For example, for the XM1202 tank, developed under the FCS program, it was required to provide full protection against 30-mm and 45-mm cannon fire in the 60-degree sector from the front and all-round protection against small arms fire with a caliber of up to 14.5 mm, as well as fragments of 152/155 mm artillery shells. In fact, in terms of booking level, this is no longer a tank, but rather an armored personnel carrier.

Reducing the booking to the level of the alleged XM1202 tank, developed under the FCS program, is unacceptable. In this niche, there may be other equipment – light tanks of the type of the domestic 2S25 Sprut-SD, or some vehicle on the Kurganets platform, with enhanced armament, but not the main tank. 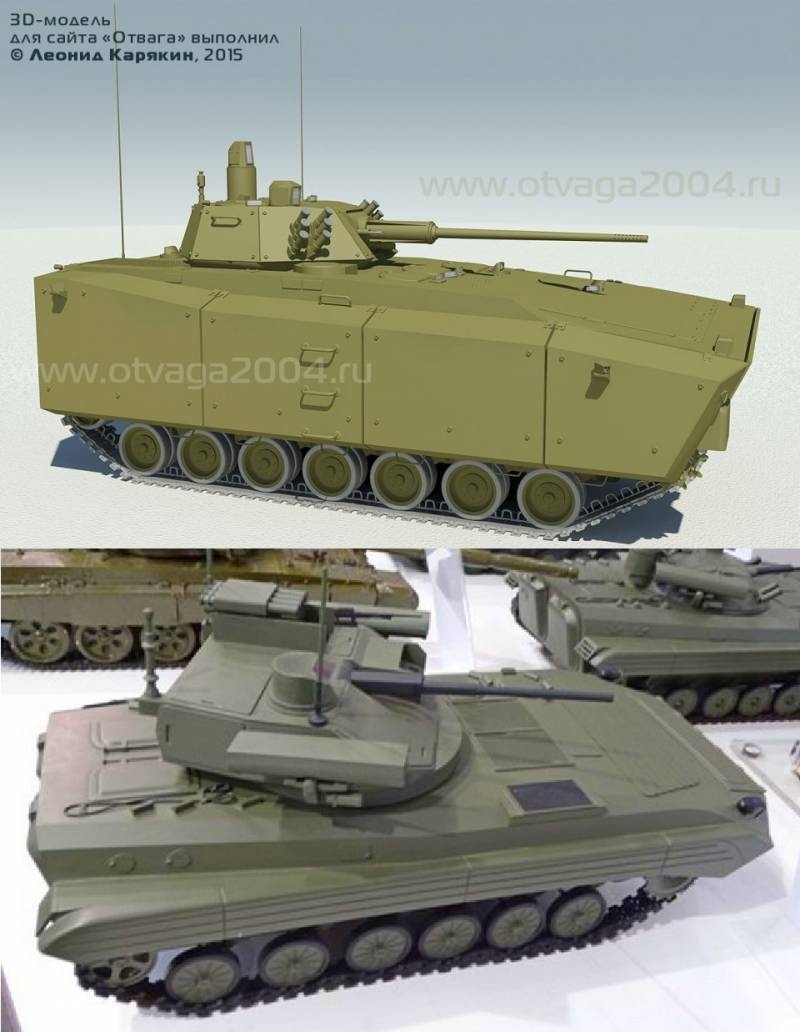 BMP “Kurganets” may well become the basis of a light tank

If a tank holds only a caliber of up to 14.5 mm, then it turns out that it can be hit on the side by both existing 23-35 mm ammunition, 45-57 mm high-power ammunition, which armored vehicles are now actively switching to, and promising ammunition for small arms, which are now being developed even for promising sniper rifles. It is doubtful that any KAZ will be able to intercept a burst of half a dozen or a dozen shells with a caliber of 30 mm.

In the case of combat in urban conditions, a light tank is also doomed. For example, KAZ will be able to intercept 3-4 grenades fired from RPGs, but it will not be able to repulse a dozen shots, and the newest tank will be destroyed by weapons more than half a century ago. At the same time, it is not uncommon for tanks, even of an outdated model, to receive a dozen hits from RPGs, and this did not lead to their destruction.

In the case of a decrease in the MBT booking, the developers of anti-tank weapons will also be able to reduce their ammunition, which will lead to an increase in their wearable / transportable ammunition load. By analogy with the Pantsir anti-aircraft missile and cannon system (ZRPK) and the small-sized anti-aircraft guided missiles (SAM) developed for it, the Gvozd, deployed four units instead of one standard missile, will there be an ATGM or RPG with three or four simultaneously produced ammunition capable of overloading any KAZ? Actually, what to talk about if ATGMs of reduced dimensions have already been created, well, or practically created. This is the Bulat guided weapon system, which is part of the updated Epoch module. It is easy to see the difference in size between the ATGM of the “Kornet” complex and the ATGM of the “Bulat” complex, which makes it possible to place at least double the ammunition load of such ATGMs as part of the weapon module. 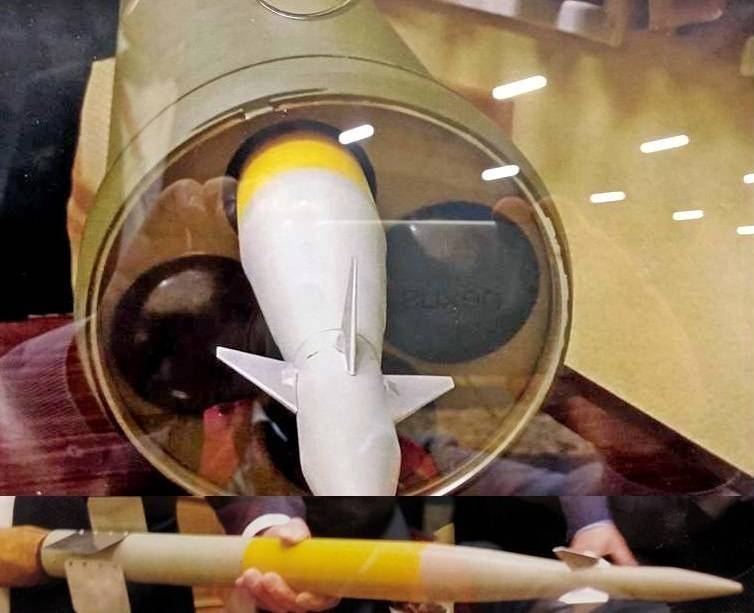 A promising anti-aircraft missile system “Nail” for the ZRPK “Pantsir”. According to the same principle, promising ATGMs and RPGs can be created, in case of refusal from heavy armor on MBT. 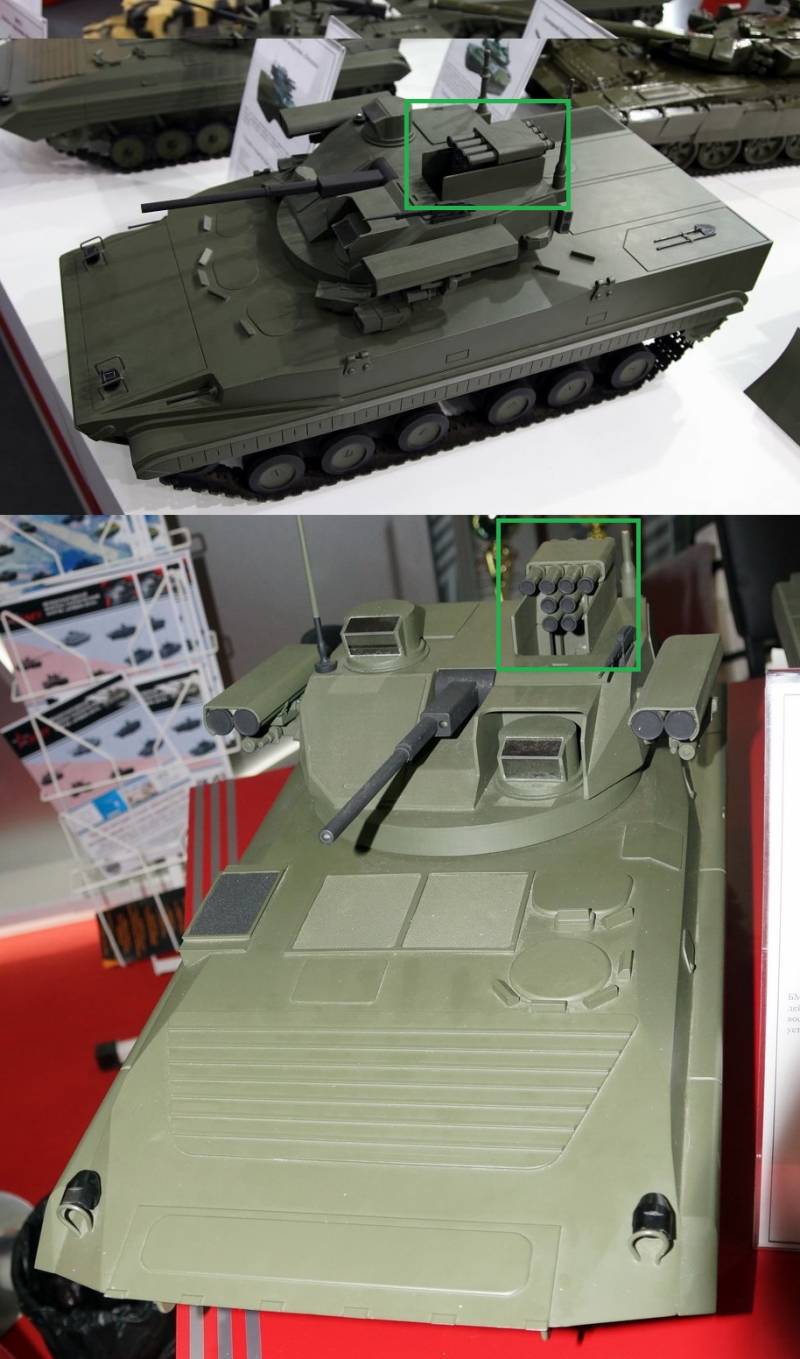 In addition, thin armor will not allow placing effective dynamic protection, it will simply break through the side or roof when triggered, and it is still premature to talk about “electric armor”.

It can be concluded that armor is needed for tanks and other heavy armored vehicles. But what level of booking is sufficient?

Obviously, the main limiting factor here will remain the weight and size characteristics of armored vehicles: dimensions and weight permissible during transportation, allowing armored vehicles to be transported by truck tractors, railroad transport and aviation, which should remain plus or minus at the level of existing vehicles. Accordingly, we can expect the maintenance of the current level of booking and, as a result, the security of promising armored vehicles. On the one hand, the means of attack will develop, on the other hand, materials, layout schemes of armor will be improved, and promising solutions will be introduced.

Without the emergence of breakthrough solutions, without taking into account the introduction of KAZ, the balance of projectile / armor will presumably remain approximately at the current level. For some time, the means of attack will have the advantage, for some time – the means of defense. There remains the question of the distribution of armor, which we can place on the body of armored vehicles.