On December 23 at the Baltic shipyard “Yantar” a solemn ceremony of raising the flag was held on the large landing ship “Pyotr Morgunov”. The new BDK became part of the Navy and will soon go to the duty station.

From contract to service

“Petr Morgunov” is the second large landing craft built on pr. 11711 developed by the Nevsky Design Bureau. The first was “Ivan Gren”, which was accepted into the Navy in July 2018 and transferred to the Northern Fleet. At this, the construction of landing ships according to the original project will stop. In production, they will be replaced by more advanced samples, created taking into account the accumulated experience.

The groundwork for the construction of the large landing craft “Petr Morgunov” was created back in the 2000s, in parallel with the work on the head “Ivan Gren”. The contract for the second ship of the project was signed on September 1, 2014. According to its terms, the Yantar shipyard had to complete all work and hand over the finished ship by the end of 2018. Unfortunately, these deadlines were not met.

By the summer of 2015, preparations for construction began at Yantar. The groundbreaking ceremony took place on June 11, 2015.The next event, the launching of the ship, was held on May 25, 2018. Completion of construction continued until the fall of 2019, when preparations for testing began.

In mid-December last year, “Petr Morgunov” went for testing, and the customer and the contractor decided to combine the factory and state. During these events in early spring, problems arose with individual systems and units. The need for repair and refinement led to a temporary suspension of tests. By the summer, the ship again went to sea for final checks. 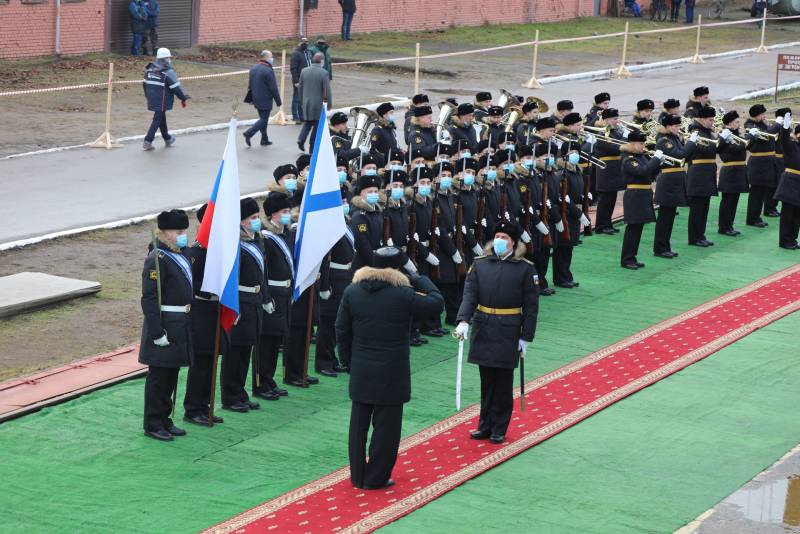 State tests of the ship were successfully completed several weeks ago. The new BDK was recognized as ready to be handed over to the customer and to the beginning of service. By mid-December, there was news about the imminent ceremony of putting the ship into operation. The event took place on December 23. “Petr Morgunov” is included in the Northern Fleet. He will reportedly leave for his permanent duty station in Severomorsk early next year. Thus, both BDK pr. 11711 will serve together.

“Pyotr Morgunov” was built according to project 11711, modified taking into account the experience of testing the lead ship and new wishes of the customer. It is noted that during the construction of this large landing craft, all the most modern technologies were used. In addition, the main characteristics of the first serial BDK surpass its predecessor.

Project 11711 again implements the “traditional” domestic concept of a large landing ship, capable of delivering soldiers and equipment to ports or to an unprepared coast, as well as providing fire support. The well-developed concept is implemented with the use of modern technologies, materials and components, which allowed us to obtain the highest possible level of performance.

The new “Petr Morgunov” has a length of 135 m and a total displacement of 6.6 thousand tons. The power plant is built on the basis of two high-power diesel engines. Movement and maneuverability are provided by a pair of propellers and a bow thruster. The ship is capable of a speed of 18 knots and has a cruising range of up to 4,000 miles. 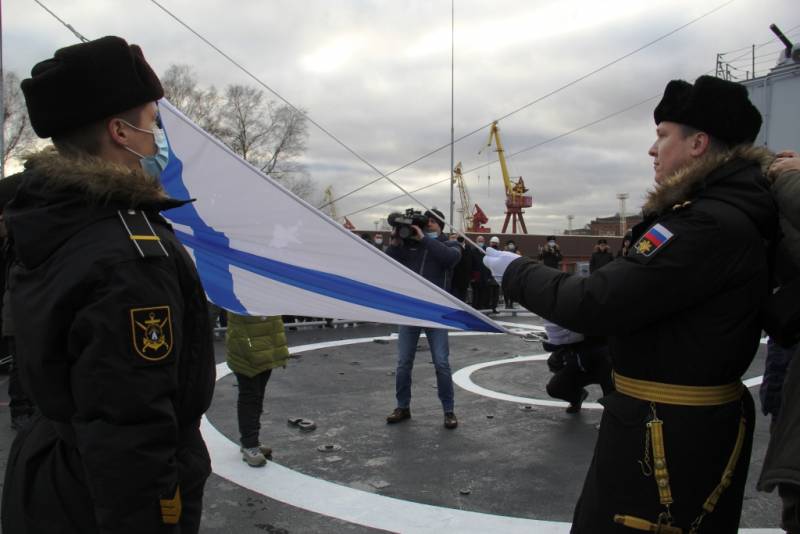 Most of the internal volumes of the hull are given for the placement of the landing force and its equipment. Up to 13 armored vehicles weighing up to 60 tons or 35-36 units are transported on the tank deck, which runs through the entire hull. light equipment. The ship can accommodate up to 300 people. – Reinforced Marine Corps Battalion. Equipment or other cargo is fed into the hold through a hatch in the upper deck or under its own power along the bow and stern ramps. Disembarkation is only possible through the ramps. To work with loads, the BDK has its own crane with a capacity of 16 tons.

The aft deck is designed as a helicopter pad; there is a hangar in front of it. The ship is capable of carrying up to two transport-combat helicopters or one attack helicopter. Also “Petr Morgunov” has several motor boats on board.

There is a set of barreled weapons to support the landing. It includes a pair of 30-mm AK-630 mounts in the rear of the superstructure and one twin AK-630M-2 for firing into the front hemisphere. There are several machine gun installations. Electronic armament includes systems of various types that provide surveillance of the surface and air situation, as well as the use of standard weapons.

For the development of the fleet

Both BDK pr. 11711 are included in the Northern Fleet. The first entered service more than two years ago, and the second has yet to make an inter-fleet transition to the Severomorsk base. After that, the landing forces of the KSF will noticeably grow and improve their capabilities.

Until recently, the KSF had five BDKs. Four of them belong to the old project 775 / II and began service in 1976-85. Only “Ivan Gren” can be considered modern. Also, the landing force includes 7 boats of different types; of these, four have been built in recent years. It is easy to see that the appearance of the new “Peter Morgunov” will significantly improve both the quantitative and qualitative indicators of the landing forces of the Northern Fleet. 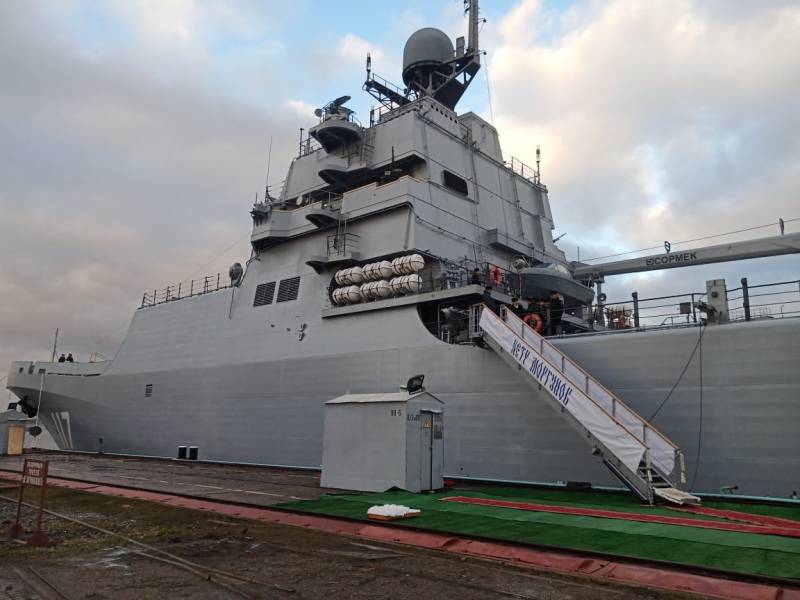 Despite the well-known disputes about the ways of development of the amphibious forces, the BDK are quite capable of solving a number of basic tasks, thanks to which they retain their place in the fleet. The new “Peter Morgunov”, like other ships of the KSF, in the event of a conflict, will be able to land amphibious assault forces on an unprepared coast or at a distance from it, and in peacetime it will ensure the conduct of exercises.

In addition, the landing ships of the Northern Fleet are actively used in the deployment and supply of remote bases, incl. in the Arctic. It is likely that the newest large landing craft, which is distinguished by high performance and wide capabilities, will also be involved in such operations. This will make it possible to increase the overall traffic or reduce the load on old ships.

Two large landing ships, project 11711, were handed over to the customer and included in the Northern Fleet. At the same time, a fundamental decision was made to abandon the further construction of the BDK according to the original design. The next stages of the development of the amphibious forces will be associated with other ships.

On April 23, 2019, the laying of two new large landing ships, Vladimir Andreev and Vasily Trushin, took place at the Yantar plant. It is proposed to build them according to the revised project 11711. This version of the project has significant differences from the base one, but its number has not changed. As a result, in the future, the Navy will have several ships formally of the same project, but of different modifications.

The updated project 11711 provides for an increase in the length of the ship to 150 m and an increase in displacement up to 8 thousand tons, as well as the corresponding restructuring of general ship systems. The layout and load placement methods will change. It was argued that the new BDK will be able to carry several boats of the pr. 11770 “Serna” and will carry up to 12 helicopters. A voluminous tank deck with access via a ramp will remain. 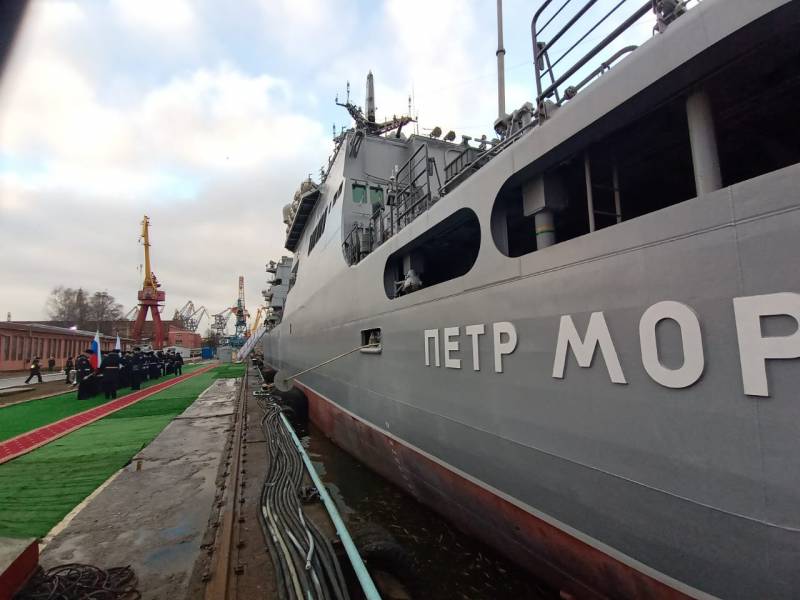 “Vladimir Andreev” and “Vasily Trushin” are intended for the Pacific Fleet, which so far has only four large landing ships built in 1974-91. The new ships will be launched in 2022 and 2023, and admission to the fleet is expected by the end of 2024 and 2025. The possibility of building the next large landing craft of the modified project 11711 was mentioned, but there are no real contracts yet.

Also, the construction of a fundamentally new for our Navy universal amphibious assault ships, project 23900, has begun. Two such hulls were laid in July this year and are planned to be commissioned in 2026-27. Probably, in the future, the construction of the UDC will continue, and the fleet will have mixed landing forces with ships of different classes.

Project 11711, already at the development stage, faced a variety of problems, from lack of funding to changing customer requirements. However, despite all the revisions and improvements, in 2018 the lead ship Ivan Gren was handed over to the Navy. The other day, the customer received a second of the same type “Peter Morgunov”.

Two new BDK meet the requirements of the Navy, however, they decided to abandon the problematic project 11711 in its first version. A new version of the project has been developed, according to which new landing ships will be built, at least two units. Thus, the rearmament of the amphibious forces of the fleet continues. The transfer of “Petr Morgunov” completes one stage of this process and allows you to start a new one.